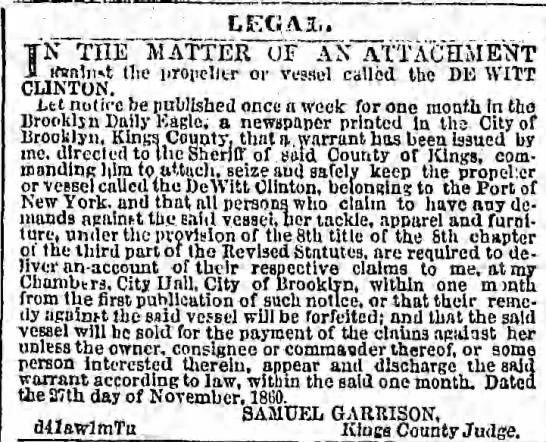 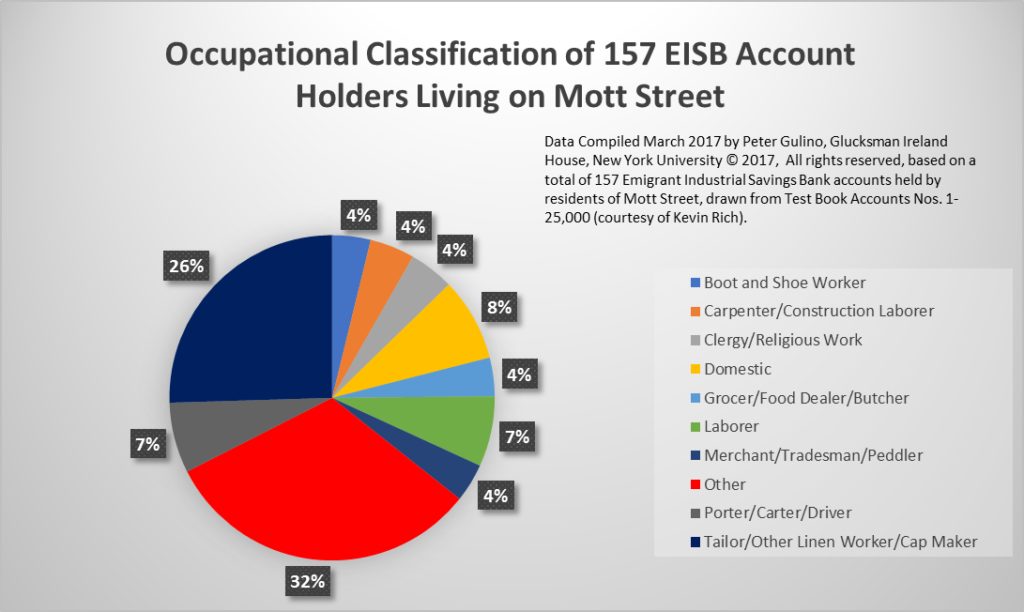 Graph Outlining the Occupation Classification of 157 EISB Account Holders living on Mott Street According to their Test Books. Occupations Listed Under the Title ‘Other’ Worked in Occupations That Composed of Four or Fewer Individuals From the Sample. These Occupations Include but Are Not Limited to Blacksmith, Newspaper Salesman, and Longshoremen.

When comparing this chart to Robert Ernst’s findings in his analysis of occupation in the New York State Census of 1855, one must first remember that the census data, in addition to being broader in a horizontal sense, is most likely broader than this study in a socioeconomic sense due to the fact that this study relies on data from a savings bank. That being said, the EISB does cater to Immigrants of many social classes, and thus this sample is quite useful when studying the economic situation among immigrants on Mott Street. The sample above includes immigrants from eight different countries, but the vast majority, 126, was Irish.  While the high rate of tailors, and others working in related industries such as dressmaking, coincides with Ernst’s findings, the rest of the chart is quite interestingly balanced. No other occupation occupies more than eight percent of the workforce. In Ernst’s findings, more than 61,000 Irish worked as laborers, domestic servants, or tailors while no other single occupation totaled more than 7,000.[1] This stark difference may be due to the skew caused by the bank sample, but it is clear that the EISB members on Mott Street were most likely diversifying economically as a reaction to the economic conditions in the neighborhood. 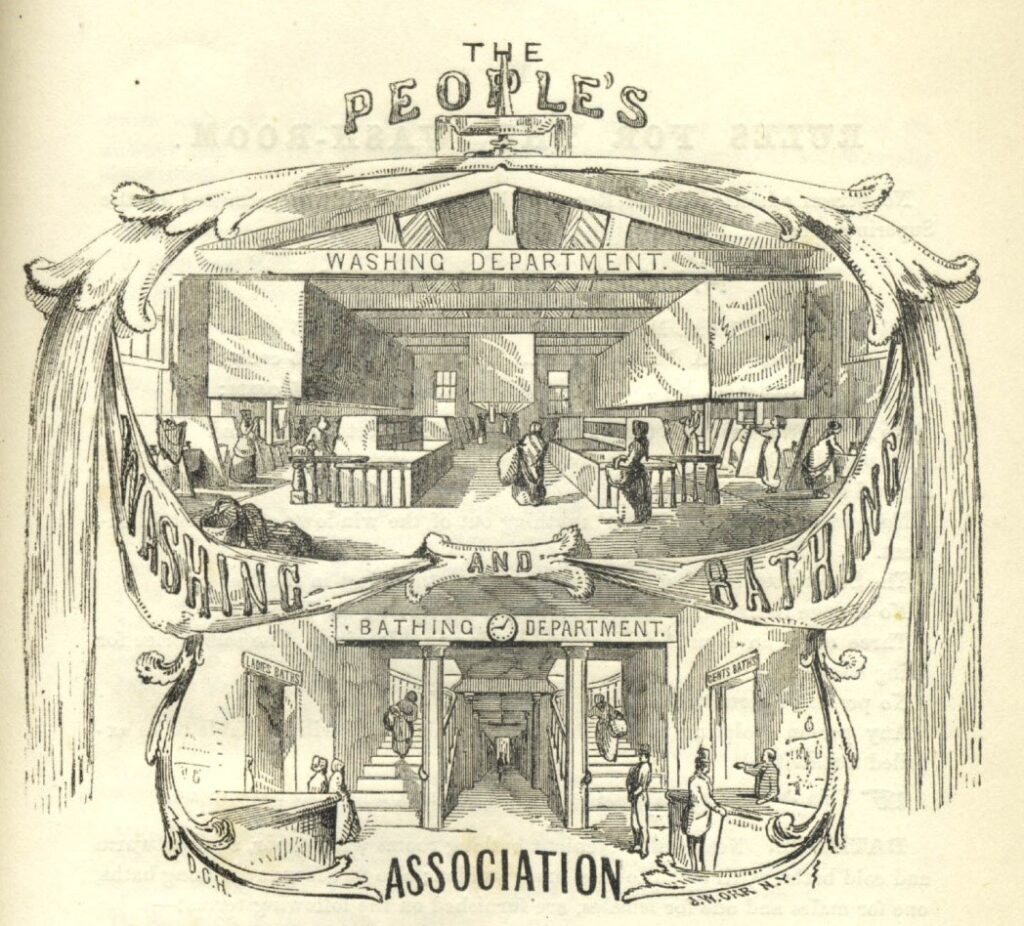 As early as the 1810s and 1820s the Irish were targeted for their lack of cleanliness and, in part because of this, their potential for being carriers of diseases like cholera and tuberculosis.  The focus of one particular campaign was the right to keep farm animals in the City.  Reformers at the time did not just make the connection between the dirtiness of immigrants and the dirtiness of their animals, but they equated one with the other, thus labeling the poor the “Swinish Multitude.”  Bylaws were passed to remove pigs from the streets of New York, but this did not solve all of the challenges of cleanliness in the rapidly growing city. When cholera reached epidemic proportions in 1831-32, New Yorkers again equated disease with the foreign-born. [1]

Reformers frequently linked physical condition and morality; unclean bodies made unclean souls, and people who were vile on the outside committed the vilest of crimes.  By extension, the physical environment in which poor people lived also shaped and represented their character. There were renewed calls to improve sanitation and personal hygiene in the 1840s as Irish and German immigrant arrivals spiked and the population of the 6th and 14th Wards surged. One of the proposed solutions was the creation of a bathing and washing house in New York to encourage a sense of “cleanliness, health, self-respect, and virtue.”[2]

The People’s Washing and Bathing Association was incorporated in April 1849 as a philanthropic venture to make one a reality in New York, using a combination of fees, charitable contributions, private investments, and public funds to keep prices low.[3] Robert B. Minturn, the wealthy Quaker shipping merchant who also served as one of New York’s Commissioners of Emigration, was President in the association’s early years; Abraham Bell (1778-1856), another Quaker shipping merchant who was born in Ireland, was one of its Directors. [4] A similar establishment in London’s Whitechapel neighborhood had pioneered the bath house movement just a few years earlier.[5] 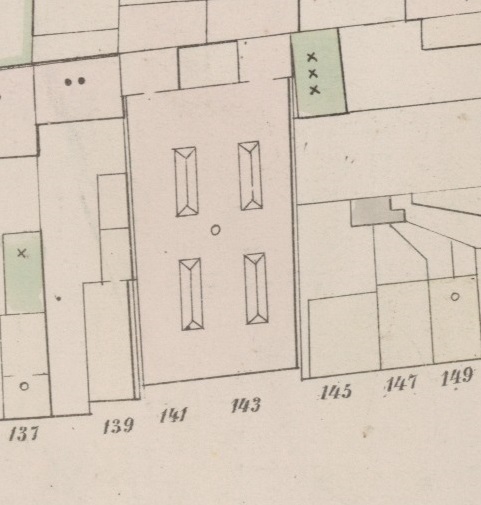 The skylights of the People’s Washing and Bathing Establishment are clearly rendered in this detail from Plate 26 of the Perris Fire Insurance Map. NYPL Digital Collections. nypl.digitalcollections.510d47e0-c7dd-a3d9-e040-e00a18064a99.001.g

In May 1852 the People’s Washing and Bathing Establishment opened its doors at 141-143 Mott Street to the public. This was a large, three-story building with lots of windows and skylights, occupying two city lots near the corner of Grand Street and the southern end of the 14th Ward, erected at a cost of $42,070, “in the center of a neighborhood more in need of it than any other locality in New York”. [6]  According to the Association’s first annual report published in 1853:

“As a people we have a sort of horror of all poor establishments generally, and hence we know but little of the advantages to be derived from such public baths, since we are far too apt to associate the idea of meanness with anything of this character. The experience of European cities shows the fallacy of the idea. The experiment which has been made in New York shows that such an establishment can be conducted In a systematic and satisfactory manner, and even profitably, by a private company.” 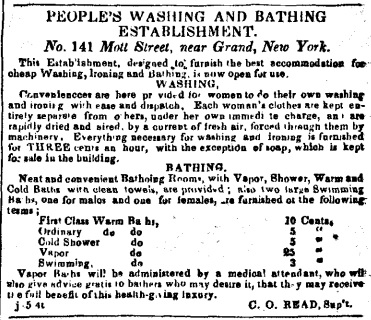 Access to the building led up to the second floor which acted as the main floor and the reception area. This floor also housed the building’s baths which included simple five cent baths, more luxurious ten cent baths with all the amenities a bather needed, and vapor and shower-baths in the rear of the building.  All of bathers had access to cold water as well as hot water heated by a networks of pipes valued at $10,000, but ten cent bathers could ask a personal attendant to change the temperature. Staircases led down to a heated swimming pool on the first floor which could be accessed for three cents per hour, or up to the third floor where patrons could wash their clothes at sixty-eight different wash stations. The first floor also housed the building’s furnace and steam engine and a barber shop. In its first six months, the Establishment was visited by 50,000 bathers and 4,000 washer-women.  By the end of its second year, it was serving over 100,000.  It was reported that 5,675 persons used the establishment in a single week in the summer of 1855. [7]

The early annual reports of the People’s Washing and Bathing Association indicate that the novelty of the facility among local residents in the 6th Ward only offset operating costs in the first year.

Despite some “general and obstinate prejudices among the class for whose benefit it was created” — such as the shame of carrying clothes through the streets — the New York Tribune reported on November 7, 1855 that “the majority of those who frequent the building are professional washerwomen, who find it cheaper to do their work there besides saving the discomfort and confusion that invariably attend washing-day at home.  Some of these women we learned make from a dollar to twelve shillings a day without any extra exertion.  There is one woman to whom the matron gives all the chance jobs that may be brought to the house; she does well, usually earning one dollar and fifty cents a day, and sometimes hiring help from other women, at a profit.”  Indeed, the Association boasted in its Second Annual Report that “not one of the two hundred wash-women who resort to it every week will say anything but in its praise.” [8]  A dollar a day was equivalent to what unskilled male laborers could earn, at a time when women’s daily wages were typically much less. 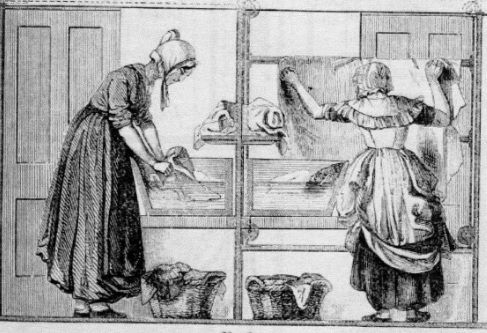 Engraving of women at their washing stations (possibly in Baly’s Westminster Wash-house of 1849), The Pictorial Handbook of London (1854), p. 255. 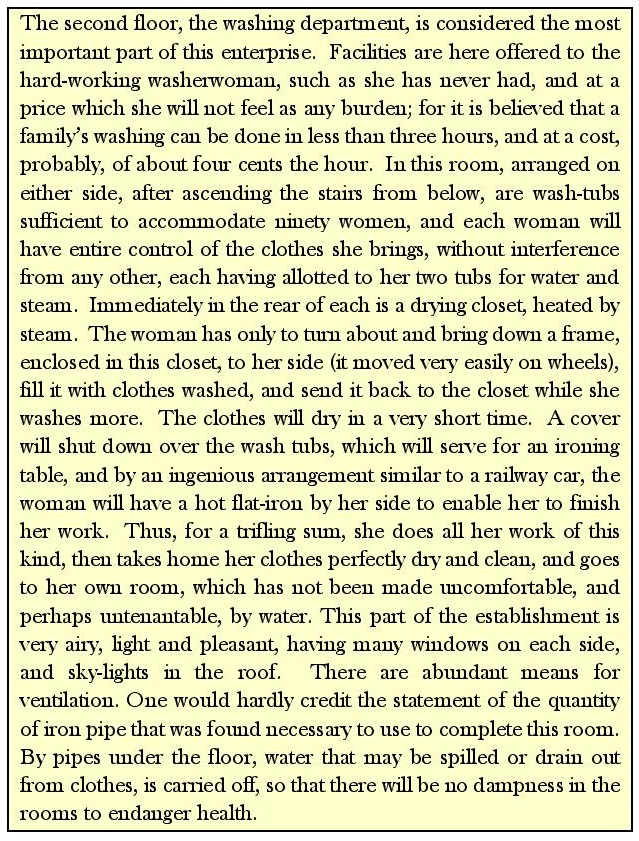 Letter to the Editors from the People’s Bathing and Washing Association, Evening Post (New York, NY), 5 May 1852, p. 1.

According to Robert Ernst’s research for Immigrant Life in New York City, in 1855 the New York State census counted 2,563 “laundresses”, 68% of whom were Irish-born. Among the washer-women who could have taken advantage of the People’s Washing and Bathing Establishment are Bridget Pentony and her niece Mary Keane (pronounced Cain, sometimes spelled Kane, see EISB Acct. No. 24895). Both women were born in Stabannon, County Louth, emigrated to New York in 1839 per the ship Sea from Liverpool, and lived at No. 47 Mott Street from the 1850s.  Both gave “Washer” as their occupation when they opened bank accounts with the Emigrant Industrial Savings Bank.  They had three joint accounts, which appear to corroborate the Tribune report.  The first account (No. 6247) was opened in 1854 and closed in 1868 with a balance of $530;  EISB No. 10747 was very active between January 1856 and September 1869 when the closing balance was $515 (the historic standard of living equivalent today would be $9,360); the deposit ledgers do not survive for their account EISB No. 24895 opened at the end of July 1860, but if the older accounts are any evidence, their income as laundresses was robust.  Both women were still living at No. 47 Mott Street when the 1880 census was taken: at age 70, Bridget was keeping house while Mary continued to work as a laundress.  Their neighbor in the building, Ah Hoe from China, also did laundry work. 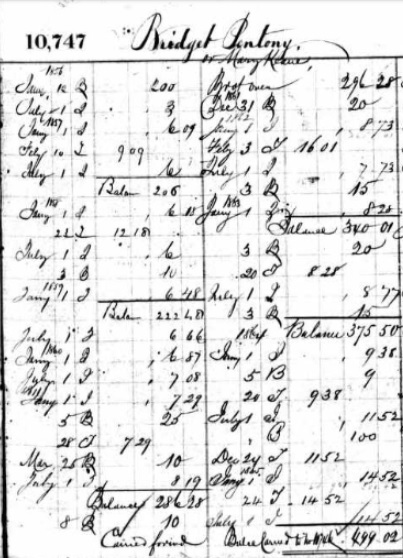 Deposit Account Ledger 10,747 for Bridget Pentony and her niece Mary Keane. With few exceptions, the two women collected interest payments on their initial deposit of $200 on the first of January and July for thirteen years. New York, Emigrant Savings Bank Records, Ancestry.com. 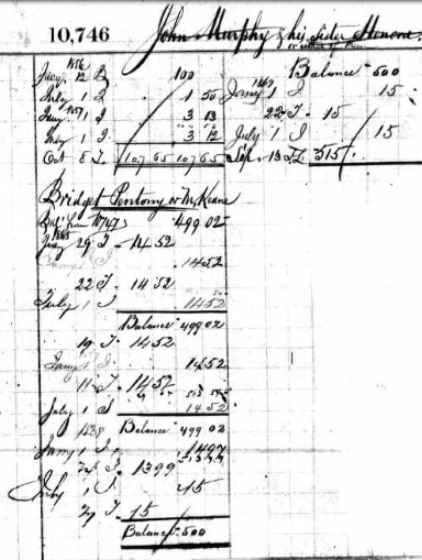 During the summer of 1858, Nos. 141-143 Mott Street attracted 1,500 bathers on one day alone.[9]  Despite the high rates of attendance, the People’s Washing and Bathing Establishment was in hot water of another sort. Its goal had been to achieve a self-sustaining business model but, at best, revenue was barely enough to cover the daily expenses of running the place.  The Association was forced to begin borrowing money as early as 1854 to keep up with building maintenance yet the financial situation did not improve. Horace Greeley, one of its Directors and the editor of the New York Tribune, caustically remarked, “Whether this result is to be attributed to the innate love of filth in the people in that quarter of the city whom it was designed to reach, or whether even the slight sum charged for the use of its cleaning appliances was too much for the means of the poorer class of people, we are not competent to decide; but that as a self-supporting institution it has been so far a failure is apparent.”  Some of this failure can be attributed to resentment towards the reformers who promoted the Establishment, epitomized by the language the New York Times used in an editorial:  “a shower quells a mob, and a thorough bathing daily would wash away half of the causes of quarrels in the dirtier parts of our town.  Most of the gross sinning is done in the dirtiest places; most of the startling crimes are committed by dirty scoundrels; and when the cholera comes, it always whets its appetite , and grows fierce on on the dirty denizens of dirty places first.”  [10] 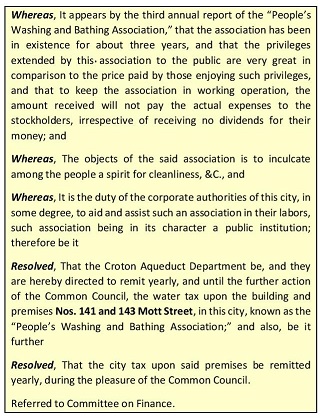 The Association petitioned the City Council in 1855 for remittances from the water and property taxes it was obligated to pay. Nevertheless, financial concerns continued to plague the People’s Washing and Bathing Establishment until it finally closed down in 1861, as all hope of charitable donations were diverted by the Civil War. [11] 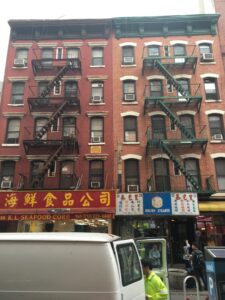 141-143 Mott Street (2017). These two five-story brick tenements were erected in the early 1880s, on the site of the People’s Washing and Bathing Establishment.

[3] Laws of the State of New York: Passed at the Session of the Legislature (1853) at https://books.google.com/books?id=ejpNAQAAMAAJ&pg=PA817&lpg=PA817&dq=People%E2%80%99s+Washing+and+Bathing+Association&source=bl&ots=yTgFdwQHts&sig=khEQkEUFxhIdhhlKnSE_eVi38KQ&hl=en&sa=X&ved=0ahUKEwjx9r24j9nUAhXCbSYKHQ-2D2kQ6AEIVTAJ#v=onepage&q=People%E2%80%99s%20Washing%20and%20Bathing%20Association&f=false’