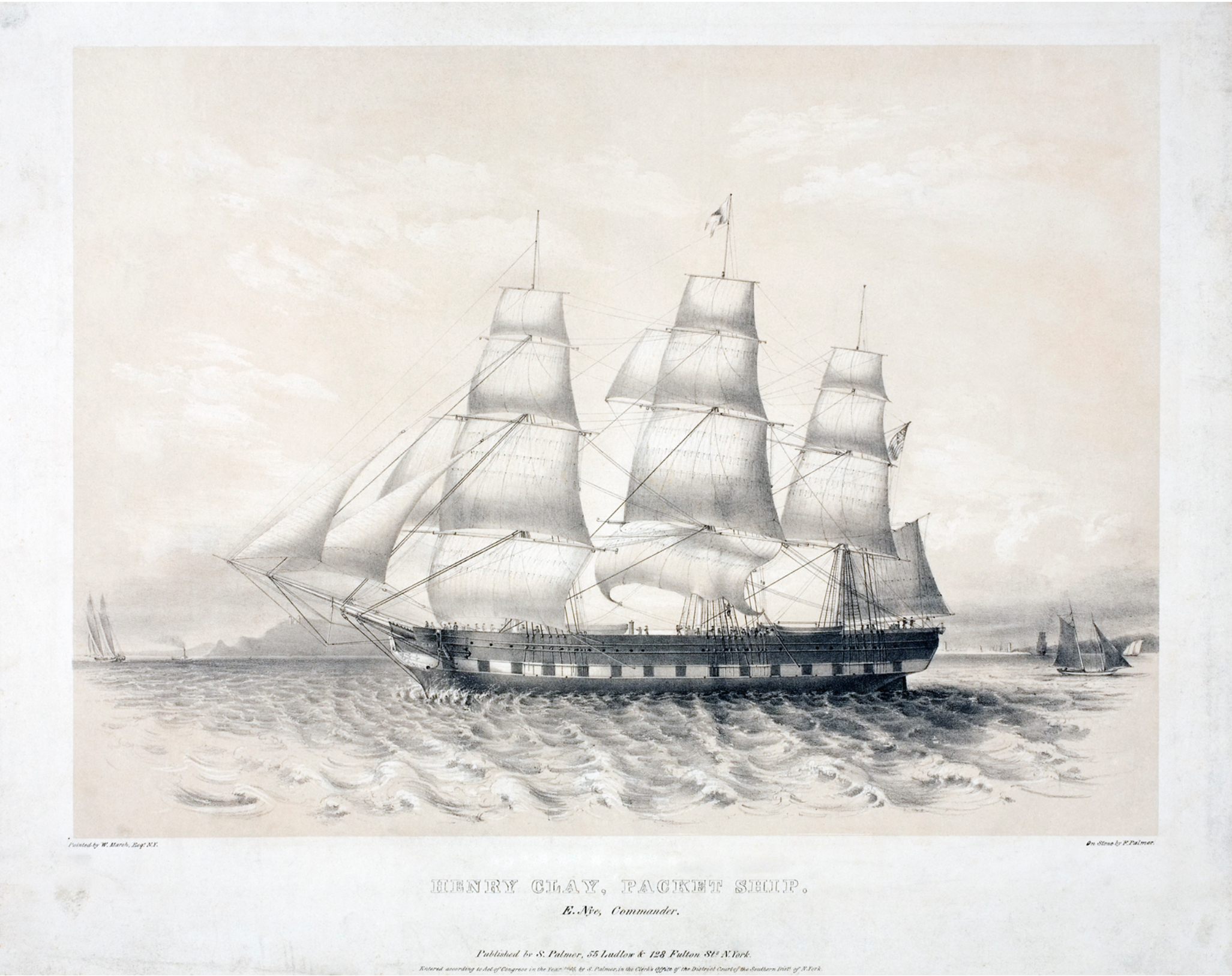 The brig Henry Clay was built in 1845, weighing in at 1207 tons, as part of the Swallowtail or Fourth Line, that sailed the Liverpool to New York route.[1] Under Captain Ezra Nye, the Henry Clay sailed westward across the Atlantic thrice yearly on March 21, July 21, and November 21.[2] Though steamship technology was underway at this time, it would not truly take hold as the dominant means of transatlantic passage until the late 1850s.[3] As such, this sailing vessel was one upon which its poorer passengers would have endured a very distressing and uncomfortable journey.[4]

Despite claims by some brigs like the Queen of the West, whose voyages were often advertised alongside the Henry Clay and which boasted “‘perfect’ steerage accommodations,” the majority of steerage passengers encountered intense overcrowding, the rapid spread of contagious diseases, inadequate hygiene measures, and sparse provisions.[5] On top of that, passengers who purchased the cheaper steerage tickets were held in disregard and even contempt by the crew: many shameful stories of jettisons and abandonment on sinking or burning vessels exist from the midcentury sailing period.[6] And so, those fleeing unfavorable conditions at home– particularly the Irish– faced the rigors of steerage passage in an effort to reach a new, hopefully better, life in America. 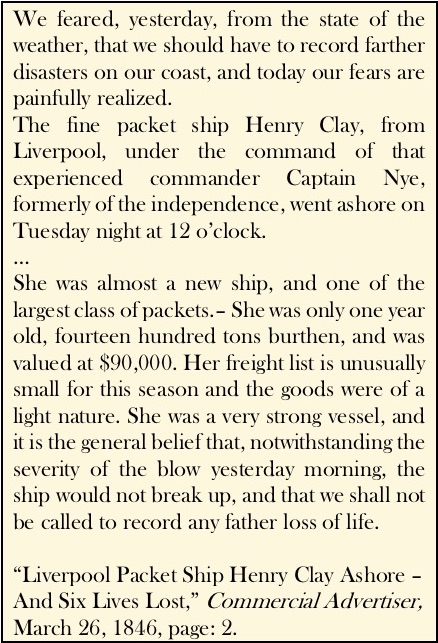 Only a year after it was built, the Henry Clay encountered a severe storm just off the coast of southern New Jersey. Gale force winds and high waves put severe strain on the ship, filling the hull with about eight feet of water and eventually breaking off the false keel of the vessel.[7] By midnight on March 26th, the ship had to be abandoned just off the coast, only a mile from the John Minturn, wrecked about a month previously.[8] The next day the steamer D.C. Pell was sent to tow the Henry Clay into shore, though most of its cargo had already sunk.[9] However, extreme efforts by Captain Nye, first-mate Mr. Cooley, in employing lifeboats operated by the crew as well as help from residents of Manasquan meant there were minimal fatalities. Six lives were lost: two seamen named Harley and Thompson, John Fell and a Mr. Farley in steerage, and two second cabin passengers.[10] The majority of the 172 passengers were Irish and it was reported that most were able to pay their passage from Squam Beach to New York via the steamboat Orus.[11] This wreck is one of the more notable events in the maritime history of the Henry Clay which continued to sail for years after with few remarks.

The average sailing ship at this point made the journey from Liverpool to New York between 1848 and 1852 in 33.3 days.[12] By comparison, the Henry Clay seems to have been particularly sluggish. One woman could attest to the conditions she faced on board. Anna Kelly was from Ballinasloe, County Galway which, in 1837 Samuel Lewis claimed to be “one of the most flourishing towns in the south and west of Ireland.”[13] Ballinasloe’s commerce continued at a positive rate for the next decade, yet, by 1849 nearly 20% of its 5,000 residents were hospitalized and staggering famine-related fatalities caused one reporter to liken its conditions to the famously disastrous situation in County Cork’s Skibbereen.[14] Probably in reaction to the increasingly desperate situation at home, Anna Kelly traveled from Ballinasloe, whether to Dublin– 70 miles away– or via the more proximal Galway harbor, and made her way to Liverpool where she boarded the Henry Clay on November 21, 1848.[15]

At age 20, Kelly was one of 316 passengers on board that voyage, 300 of whom were in steerage with her.[16] The ship manifest records Kelly travelling with a six-year-old Jane Kelly and a 3-year-old Ann Kelly. Though Kelly herself was still unmarried in 1857, it is unlikely that these girls were her own children, but they may have been nieces– Kelly had two sisters– or cousins.[17] The passage aboard the Henry Clay in 1848 cost the princely sum of £25.[18] It is possible that Kelly received assistance in the form of a prepaid passage or via remittances from a friend or relative already in America, although the evidence is lacking. Nevertheless, Kelly and her young companions braved 6 weeks and 3 days at sea before finally docking in New York on January 5, 1849 at two in the afternoon.[19] From there, her movements are unclear, but by 1855 she was employed as a domestic servant by Daniel Devlin, a wealthy men’s clothier and a trustee of the Emigrant Savings Bank, in the 12th Ward of Manhattan.[20] Almost exactly nine months after her arrival, the Henry Clay along with much of its cargo, burned in New York harbor in the small hours of September 5th.[21] Kelly could have heard the news; how she may have reacted is unknown, but she certainly remembered her voyage with enough clarity to note precisely the arrival date and name of her immigration vessel eight years later when she opened an account at the Emigrant Savings Bank.[22] 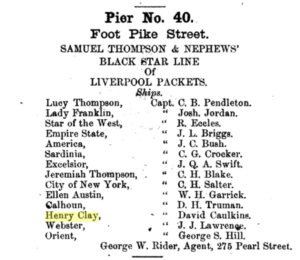 Anna Kelly was but one of the hundreds of thousands who crossed the cold Atlantic from the British Isles aboard this vessel. The Henry Clay was rebuilt by Spofford, Tileston & Co. and in 1850 it was sold to the Dramatic Line, still on the Liverpool to New York route.[23] Captain Francis M. French led the newly built vessel between 1850 and 1852.[24] This new Henry Clay was built to a similar plan as the first iteration: three decked in oak with copper fastenings weighing in at 1207 tons.[25] On this ship Mary Ferens of Birr, County Offaly made her way to New York as one of 556 other passengers.[26] Though scheduled to sail on June 11th from Liverpool, the Henry Clay did not push back from the port until the 14th, indicating the often uncertain and chaotic nature of securing passage in Liverpool.[27] Nevertheless, after five weeks and two days at sea, the ship docked in New York.[28] By 1853, Mary Ferens was living in the 12th Ward and working as a dressmaker.[29] Her sister Ann had joined her there, and two years later their sister Ellen made the journey as well, finding work with Mary as domestic servants to the Roberts family of Manhattanville.[30]

“The splendid and favorable packet ship” Henry Clay continued to make its characteristically lengthy voyages across the Atlantic under its new captain Daniel Caulkins, who took charge of the ship in 1853.[31] County Antrim native Patrick McCann was among the first to sail under Caulkins when the Henry Clay left Liverpool on February 29, 1853.[32] Having been at sea for nearly six and a half weeks, the ship and its 653 passengers arrived in New York on April 15th of that year, suffering no fatalities.[33]

It would seem that under Captain Caulkins the Henry Clay sustained many years of peaceful and safe transatlantic voyages. Ship manifests record few to no deaths despite large volumes of passengers.[34] Likewise, there is little to be found in the press of any scandals and misconduct aboard the vessel. Alongside its passengers, the ship carried substantial exports from the United States to Liverpool including cotton, flour, ores, beef, and wheat, among other items.[35] The greatest hardships that the Henry Clay faced seem to have been accidents. Undoubtedly conditions — despite claims by agents’ Spofford, Tileston, & Co. of “having very superior accommodations for cabin, second cabin, and steerage passengers” — were arduous and unpleasant between decks as they were on most sailing ships of this era.[36] The many thousands who crossed the ocean aboard this vessel could, therefore, expect a reliable if drawn-out voyage. Indeed, as Robert Taylor notes, the greatest advantage of packet ships as a mode of transportation was their regularity.[37] And yet, each emigrant who boarded the Henry Clay also had to navigate the turbulent and often dangerous Liverpool docks before passage to New York was ensured. The combination of this two-step migration and the difficult Atlantic passage would have served to create an indelible, and likely unpleasant, memory of the emigration experience.

[25] The New York Marine Register: A Standard Classification of American Vessels, and of Such Other Vessels That Visit American Ports (New York: R.C. Root, Anthony, & Co., 1858), 38.