As New York City spread northward on the island of Manhattan in the nineteenth century, the Irish engaged with real estate expansion on several levels, especially through the building trades. In the process, the footprint of Irish New York also changed, from heavy concentrations in the downtown tenement districts to the possibilities of suburban living in the Twelfth Ward. Francis Lawler [also spelled Lawlor and Lalor], from Athenry, Co. Galway, was one of those Irish for whom construction offered not only geographic mobility but social and economic advancement as well. 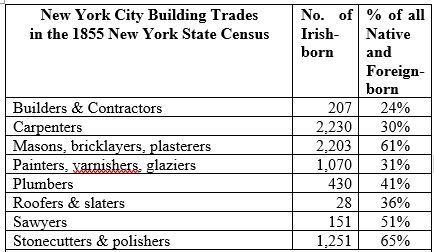 Born around 1811, Lawler appears to have emigrated from Ireland twice, the first time in 1840. [1]  Sometime in the early years of the Famine, he returned to Ireland, only to re-emigrate with his wife, Sarah, and their three young children (Fanny, age 10, Sarah, age 2, and infant James).  They sailed on the General Taylor from Liverpool, arriving in Boston on May 5, 1848.[2] The family eventually made their way to New York City where his three brothers lived.[3]  By 1850, they were settled in the 17th Ward, probably on East 9th Street, and Francis had found work as a bricklayer. When he opened his first Emigrant Industrial Savings Bank (EISB) account in the spring of 1852, Francis gave his occupation as a mason, a rapid advancement that may have been facilitated by his older brother, Daniel, also a mason, who lived nearby in the 18th Ward.[4]  For men like the Lawlor brothers, construction work was often an entry point into the City’s labor force.  In 1855, there were 7,570 natives of Ireland in New York City’s building trades and 61% of all the City’s masons, bricklayers, and plasterers were Irish immigrants. [5]

Co. Galway native Francis Lawler was literate in English. He signed his Naturalization Declaration in New York City on October 24, 1856 while living at 243 16th Street. His brother, Daniel, of 14 4th Street, was his witness. New York, State and Federal Naturalization Records, 1794-1943, Ancestry.com.

According to Robert Ernst, “As the city moved northward, stonecutters, masons, bricklayers, and carpenters led the way…In the building trades, some immigrants, especially those who spoke English and whose techniques resembled the American, found unique possibilities of bettering themselves…the great demand for construction…aided journeymen to become masters and masters to branch out as builders and contractors.”[6]  Indeed, by 1855, the Lawlors (including an American-born daughter, Mary) had moved north of 14th Street in the 16th Ward, to a modest brick building at 237 Sixth Avenue where they seem to have been renting from Luke O’Reilly, an Irish-born physician. Francis was now a carpenter.[7] Within two years, however, “Frank” Lawlor had relocated his family again, this time to Manhattanville in the Twelfth Ward; he opened a second EISB account, then a third, giving his occupation as builder.[8]

As Frank Lawlor’s career was rising in the building trades, one of Manhattan’s oldest families, the Schieffelins, began to sell off their land in northern Manhattan.  In 1851, eighty lots were offered for sale “in Manhattanville, well located for immediate improvement by factories or dwellings.  The low price of lots, in comparison with other parts of the city, the present demand for houses there, the convenience of access by water, railroad and omnibus, make Manhattanville worthy of the attention of Manufacturers, Builders, &c.”[9] Perhaps Frank Lawlor was tempted north by Samuel B. Schieffelin’s March 1857 ad in the New York Herald for more lots for sale near Tenth Avenue at $458 each.[10] Despite the financial panic that autumn, Lawlor began to save; in September of 1858 he withdrew $515, certainly enough to buy a lot in Manhattanville. Then, using a separate account, Lawlor saved $1,512.50 over a six month period in 1858; by 1860 the new Lawlor home on the corner of West 130th Street and the Bloomingdale Road (now Old Broadway), was worth $4,500 at the time and he had probably built it himself.[11] He even had enough discretionary funds to install a street lamppost outside the house in 1862.[12]

The central tenets of real estate in the nineteenth century remain the same as today: location, location, location. Howard Brown Woolston of Columbia University noted that “more Irish families came up from the lower West Side to take advantage of lower rents,”[13] and that the Manhattanville Irish were “mostly engaged in the rough work of transportation and construction.”[14] The neighborhood anchors were the Church of Annunciation, est. 1854, built largely to cater to the Irish workers of the Hudson River Railroad; the Convent and Academy of the Sacred Heart; and Manhattan College.[15] The Irish “settled on the old diagonal streets between 129th and 132nd, east of the church.”[16] Woolston’s study notes the importance of “well-to-do” parish members who both filled the pews and the pockets of the Twelfth  Ward by developing real estate.[17] Among these was Francis Lawler who, along with his son James, now a carpenter, had a building company working in the Twelfth Ward with thirteen people on a payroll of $7,000 in 1870, or over $140,000 in 2020, with the business as a whole worth $30,000, or over $600,000 by today’s standards.[18] 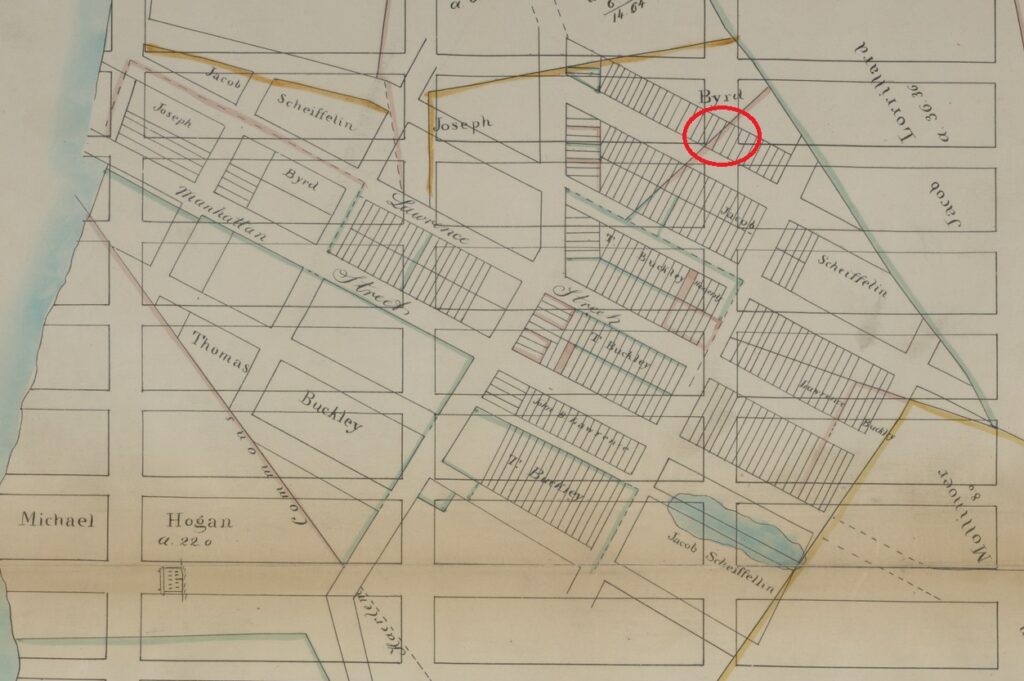 The area circled in red is the intersection of Tenth Avenue and West 130th Street in Manhattanville. Francis Lawler began to develop the west side between 130th and 131st Street in the 1870s. Detail, Maps of farms commonly called the Blue book, 1815 : drawn from the original on file in the street commissioner’s office in the City of New York, together with lines of streets and avenues [1868], NYPL DigID 1531822. 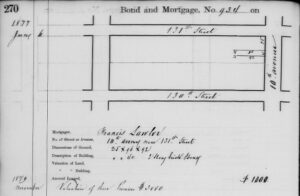 Francis Lawler’s mortgage with Emigrant Industrial Savings Bank for property of the west side of Tenth Avenue between 130th and 131st Streets in 1877. Emigrant City Bond & Mortgage No. 934, NYPL. 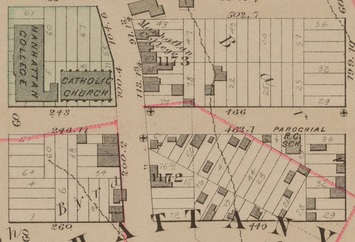 Francis Lawler developed the lower right hand block depicted on this 1879 map of Manhattanville. He lived on the side of the block closest to the Church of the Annunciation. Plate 29, Atlas of the entire city of New York : complete in one volume ; from actual surveys and official records (NY: G. W. Bromley & Co. , 1879), NYPL DigID 5188178

It may have been highly strategic and valuable for Francis Lawler to construct many of his properties adjacent to the Church of Annunciation. He borrowed $1,000 from Emigrant Savings Bank in 1877 to build a two-story brick house near the corner of 10th Avenue and West 131st Street, one block from the church, that was valued at approximately $3,000 dollars in 1879.[19]  The ability to profit from real estate is evident from sales records. In April 1880, Lawler sold a two-story dwelling on the west side of 10th Avenue near West 130th Street to Richard Dowling for $3,250;[20] and another two-story brick house with a stable, also on the west side of 10th Avenue but nearer to West 131st Street, to Mr. William Sargeant in February 1885 that was valued at $4,500.[21] 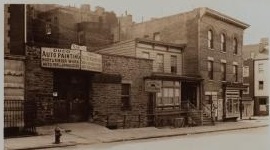 A nineteenth century frame home and a brick building on West 131st Street near Broadway such as Francis Lawler might have built. Photo by Percy Loomis Sperr, 1932. Digital Public Library of America / NYPL DigID 715549F.

Francis Lawler’s business successes were overshadowed, however, by personal tragedy. Shortly after arriving in America, when she was no more than four years old, his daughter Sarah Lawler died.[22] In 1860, only months after their move to the more salubrious environment of Manhattanville, Francis’s wife Sarah (nee Willis) died of “consumption” or tuberculosis on the morning of August 21st.[23] She was forty-two, and left behind three children, Fanny, James, and Mary, which may explain the family’s need for the young Irish servant girl, Ann Hogan, recorded in their household in 1860.[24] On May 30, 1877 at the age of twenty-five, James Lawlor passed away and was buried from the Church of Annunciation.[25] His sisters, Fanny and Mary, also pre-deceased their father.  When Francis Lawler died on August 15, 1886 at the age of sixty-eight, friends and family paid their respects at his home at West 130th and Broadway in the very place where Lawler’s contributions to the development of the Twelfth Ward had begun.[26] The legacy of Lawler’s success in New York City’s building trades was left to Francis’s sole heir, his infant granddaughter Fanny Parker.[27] The execution of his will was entrusted to Fr. Jeremiah J. Griffin, a native of Co. Limerick and a priest at the Church of the Annunciation, and one of the witnesses to his will was the lawyer Thomas O’Meara, the son of James O’Meara, another Irish mason and builder who lived on nearby Lawrence Street in Manhattanville.[28]

By 1891, over 600 new buildings had emerged all over the hilly terrain of Manhattanville. Woolston recalled that “several rows of flats” were beginning to form neighborhoods around the Church of the Annunciation as “the city economy had come in; the cottages and cabins began to disappear” and the urbanization of the upper West Side intensified.[29] By 1895 the Twelfth Ward had over 360,000 residents with a density of roughly 60 people to an acre.[30] This was still 1/10th the density of ethnic tenement neighborhoods of the Lower East Side, but it was now twenty times greater than the next frontier of urban development: the Bronx.[31] Upper Manhattan remained an important Irish destination into the early twentieth century.[32] The movement of Irish Catholics to new residential neighborhoods in the northern part of the island was facilitated by the steady rise of men in the City’s building trades like Francis Lawler.  His work enabled his fellow countrymen and women to improve “their standard of living materially,”[33] just as it did his own.[34]

[24] Francis Lawlor, Ward 12, New York County, 1860 U.S. Federal Census, Ancestry.com.  Lawlor may have remarried a widow shortly thereafter.  In 1875 Francis Lalor, a 12th Ward builder with $2,500 in personal estate and $6,000 in real estate whose son, James, is a carpenter in the household, was married to Mary Lalor and there are two new children’s names (Caroline, age 12 and Henry, age 9), possibly step-children. Francis Lalor, Ward 12, New York County, 1875 New York State Census, Ancestry.com. There appears to be no surviving record for the family in the 1880 census.

[29] Woolston, A Study of the Population of Manhattanville, 210.

[30] Woolston, A Study of the Population of Manhattanville, 210.

[31] Woolston, A Study of the Population of Manhattanville, 210.

[33] Woolston, A Study of the Population of Manhattanville, 238.