New York City in the 1850’s grew at a staggering pace. The population had quintupled in the thirty-five years from 1820 to 1855, growing from 123,000 to 629,000. In the five years from 1850 to 1855 alone, it increased almost 20 per cent from 515,000 to 629,000. [1] The New York economy was such that it could absorb the arrival of hundreds of thousands of new immigrants, but the population surge strained the quantity and quality of housing. The residents of Cherry Street reflected the city’s economic growth and the arrival of immigrants required to sustain that growth. As noted in 1865, “The population of this district is made up principally of mechanics, laboring ‘longshoremen and sailors.” [2] 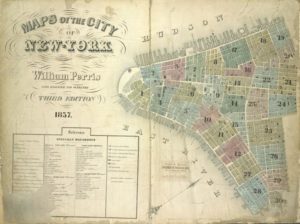 Cherry Street, for most of its length, ran parallel to Water Street along the East River piers and wharves. The neighborhood was a mixture of residential and commercial buildings, with the predominant businesses being lumberyards, coal yards and iron works. The commercial establishments, particularly lumberyards, helped to support the thriving shipping industry along the East River. The residences at and around 238 Cherry Street, between Pike Slip and Rutgers Slip, housed many people who worked in skilled and unskilled jobs around the waterfront docks and warehouses. The block was home to residences, a new church and some commercial properties on the east side of the street. It was also home to a “narrow and filthy” alley between Rutgers and Pike that connected Cherry with Monroe [that] was called Pelham Street. The yards of the small row houses on the alley were loaded “with all manner of filth and rubbish … the privies are overflowing into and over the yard … these places must be seen to be appreciated, description is impossible.” [3] 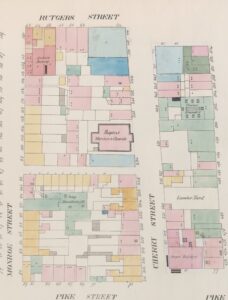 According to the 1855 New York State Census, there were thirty-three people living in six apartments at 238 Cherry. All but four of the residents were born in Ireland, the exceptions being two children of Irish parents and an American-born man and wife with an Irish surname. There were five children in the house with fourteen adult males and fourteen adult females. Of the women in the building, six were engaged in housework, three were “at service,” three were washers and two worked in “artificial flowers”. Of the fourteen males, four were laborers, most of them young and only recently arrived in America. One apartment housed three ship’s carpenters and there were two coopers living in the building. There was a teenaged waiter, a barber and a “print paster”. And there were a father and son described as “dealers in bottles”, perhaps early recyclers.

The adjacent building housed fifty-three residents, of which thirty-five had been born in Ireland. There was a Scot, three Germans and fourteen New Yorkers. Of the New Yorkers, only one did not have an Irish surname, with most of the New Yorkers being children of Irish immigrants. Of the eighteen adult males working in this house, ten were associated with the shipping trade, including seven ship’s carpenters, two riggers and one mariner.

Of particular interest among the 238 Cherry residents was Elizabeth Savage, a widow with two children, fifteen year-old Marty (presumably his name, his father was named Martin, although various documents refer to the son as “Mutty” and Michel) and eleven year-old Mary. [4] Elizabeth opened three bank accounts [5] for herself and her children at the Emigrant Savings Bank over the years. According to the bank records, she arrived in America on the Effingham out of Liverpool in 1853 from Currahey near Skibbereen in County Cork, Ireland. The passenger lists of the Effingham, however, show a forty year-old “Bessy” Savage as arriving in 1849, along with her seven year-old son, “Mutty”. Further, she appears as Elizabeth Savage in the New York City Directory for 1852, the widow of Murty, living in the city at 240 Cherry Street.

The bank records not withstanding, it appears that Elizabeth arrived in America in 1849. Since there is no record of her husband coming to America, he may well have died in Ireland, and it might further be speculated that his death may have been connected to the Great Famine. Elizabeth came from an area near the famine-decimated Skibbereen, “a town which in 1847 had become synonymous with poverty and suffering.” [6] 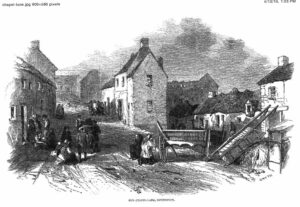 Elizabeth opened her first account with the Emigrant in July 1854 (account 7465). According to the bank’s records she could not sign her name, marking X for her signature. If she could not write, it may be a reasonable assumption that she could not read as well. Surprisingly the initial deposit to her account was $468. Over the next five years the value of this account grew to $545. In November of that same year, 1854, Elizabeth opened a second account (account 8089) with a $19 deposit. This account had significantly more activity. The balance on this account rose to $512 in 1857, then leveled off to $515 in 1859. Yet a third account (account 14487) was opened in 1857 with a $20 deposit. Less than six months later the balance was $107 and a year later it was $237. The final balance in March 1859 was $260. [7]

Elizabeth Savage closed all three of her bank accounts by September 1859, withdrawing a total of $1,320, a net increase of almost $900 from her original deposit. In an era when it would have been difficult for a washerwoman to make $5 per week or $250 a year, this level of savings is hard to explain. Her rent would have been about $9 per month, requiring almost two weeks of earnings just to make her rent. [8] By 1855 her son was fifteen and employed as a waiter, but even this extra income seems insufficient to account for the growth in the accounts.

Another way to evaluate Elizabeth’s savings is to translate the amount into a comparable current day value. Her accounts would be worth roughly $39,000 using the rate of inflation over time. A study of a sample of EISB account balances determined that “nearly 40% of Irish emigrant depositors saved the modern day equivalent of $10,000, usually after a decade in America.” [9] Remarkably, Elizabeth Savage exceeded that level of savings by almost 400%. The average peak account value for owners of businesses was $615; for professionals (primarily physicians) it was $2,100. How was Elizabeth Savage able to amass this extraordinary level of savings? Tyler Anbinder notes that there were a number of anomalies in his study of the EISB data for which there was no clear explanation. Anbinder speculated, “Perhaps some of the bank’s surprisingly wealthy widows were involved in illegal activities… it is possible that some of the wealthy immigrants … were involved in the sex trade.” [10]

Perhaps as intriguing is the withdrawal of all the funds in 1859 and what seems to be the disappearance of the Savage family. She does not appear in the 1860 or 1870 federal census nor the city directories after this. Did she remarry, changing her name? Did she leave the country? Could she have taken her significant savings and returned home to Ireland? There are no further clues. Reconstructing the life of an individual from scraps of data is like drawing a portrait of them using a connect-the-dots outline but with very few dots available. The process is challenging and dangerous.

[3] Report on the Council of Hygiene for the Ninth Sanitary District, p. 105.

[8] Report on the Council of Hygiene for the Fourth Sanitary District, p. 56.