Chaos at Sea: The Mutiny Aboard the William Tapscott

In the pre-Famine era, many Irish boarded cargo ships in order to emigrate to the United States, Canada, and other countries. At their best, these sea voyages were uncomfortable; at their worst, perilous. The passengers who were not wealthy travelers were assigned berths in cramped quarters ‘tween decks or in steerage, often literally on top of other people. Disease was also a concern, especially considering ship board conditions were not sanitary due to human waste and the close proximity to sick passengers or to those carrying disease, such as cholera.[1] Food and water were scarce; passengers were often forced to consume uncooked or spoiled food or face starvation.[2] Additionally, the season and weather conditions could prove to be disastrous. A winter voyage would lead to freezing temperatures and hypothermia, while mid-summer journeys would bring dehydration and dangerously hot temperatures in the cramped decks and quarters.

Emigrant Industrial Savings Bank depositor George O’Brien, an Irish national and baker by trade, travelled alone to the United States in 1857 on the William Tapscott, an eponymously named ship owned by the firm of Wm. & Jos. Tapscott. It is currently unknown exactly when in 1857 Mr. O’Brien sailed to America, but even if conditions were favorable and he managed to avoid extreme temperatures and disease, he was at risk of another threat on the high seas: mutiny. The William Tapscott was a ship that sailed from New York City to San Francisco to Honolulu to Enderby Island, New Zealand to Queenstown (known today as Cobh), Ireland, and then back to New York[3]. The ship carried passengers but also 2000 pounds of guano, a dung used for fertilizer.[4] This ship was just one of many shipping vessels employed by one of the most successful shipping companies of the time – W. & J.T. Tapscott, New York Agents, and William Tapscott, Liverpool Agents.[5] The line catered predominantly to steerage passengers, which were typically immigrants, but also carried goods as a means of revenue.[6] 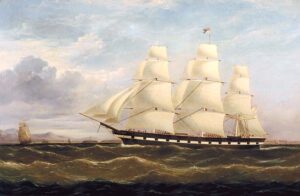 The master of the ship, James Cunningham Flynn, shared details of the mutinous event when the ship was forced to dock in Wellington, New Zealand on July 25, 1873 under the direction of the chief officer, Bernard King.[7] According to Flynn, the crew and the captain had disagreements about the seaworthiness of the ship and the brutality of the captain. The crew declared the ship “rotten and falling to pieces” and unfit to go around Cape Horn.[8] The captain planned to dock at St. Helena, after most of their journey had been completed but the crew was not satisfied with this choice. Once the captain decided he would not make an intermediate stop on the over 25,000 mile journey, the crew mutinied and violence broke out on the ship. The mate fired on the captain and the captain attacked the crew with an axe, declaring he would cut off the head or hand of any man who came near him.[9]  The mutiny ended with the captain being placed in irons in his cabin.[10] There is no record of any passengers being injured, but a violent event like this taking place on a ship that passengers are braving a long journey across the ocean would only put them in more danger than they already face on a cargo liner in the mid to late-1800s. Considering there were recorded animosity and harassment of steerage passengers at the hands of the ship mates, this is a terrifying situation to be trapped in.[11] A mutiny on board and a captain restrained could have meant death for innocent passengers and never arriving at your final destination: America.