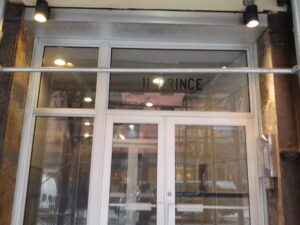 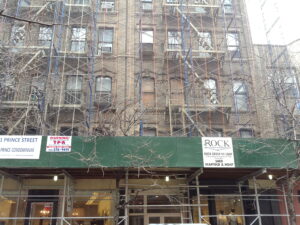 On the first block of Prince Street from East to West, a nondescript, 6-storey structure faces southwards.  Obscured by scaffolding and home to a mini-cafe and a small designer clothes storefront with 4 levels of apartment housing above, this was once the home of two prominent members of the 14th Ward’s Irish Community in the 1850s.  Along with their families, Thomas Wheelan and Francis Gilmore would have inhabited a very similar structure at this address over 150 years ago.  Fortunately for us, each was also an Emigrant Savings Bank account holder.

By diving into all the data included in their Test Book records, we can learn a good deal about these individuals and even find ways to track their lives and impact through other sources.  The similarities in situation and origins for both Wheelan and Gilmore are such that a strong case can be made that a connection had existed between these two men before ever reaching the United States.  Each man lived at this address with his wife and 4 children.  Each arrived well before the Irish Famine and the peak years of Irish Emigration (Wheelan 1832, Gilmore 1824).  Gilmore and Wheelan also named their townlands of origin as Ballina and Whitewell respectively, both near the town of Mullingar, County Westmeath.

Both men of means, their accounts (Wheelan maintained trusts for all 6 members of his family at EISB) identify them as some of the wealthiest individuals included in this study.  Furthermore, it could be said that their business interests were very much aligned – perhaps even physically.  Wheelan lists his occupation as a Publican, or proprietor of a small bar.  Gilmore names his occupation as an Undertaker at the same address. (1)  It is no stretch of the imagination to suspect these two businesses (funeral home and auxiliary/conciliatory bar) were linked and, in fact, did share the same premises.