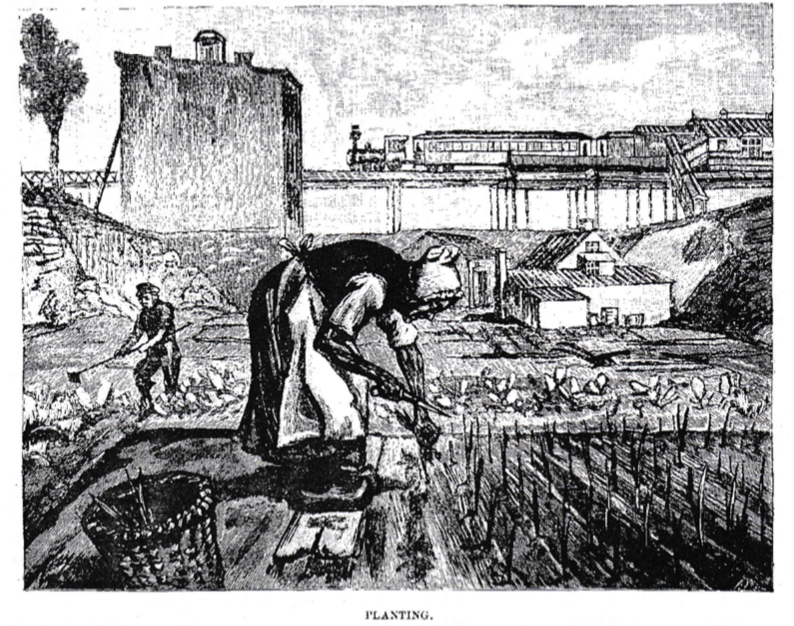 Upper Manhattan of the mid-nineteenth century was a far cry from the bustling avenues and populous apartment buildings of today. Rather, the large expanse of the 12th Ward – comprising all of the island above 86th Street – was a heavily wooded, far more rural space abounding with stately homes and only peppered with pockets of urban neighborhood centers. To many residents and visitors who reported on the topography of the 12th Ward, the abundance of small-scale farming and market gardens were notable. In 1868 Charles Dawson Shanly emphatically described the “lean and hungry dogs,” roaming goats, and rag-clad children that abounded among the market gardens “deep in the hollows” of this pastoral expanse.[1] Even as Shanly remarked on the “ancient trees” and “Rhenish castles,” Upper Manhattan was not always so. A series of advancements in transportation technologies and changes in food distribution in the early decades of the nineteenth century led to a dramatic shift of land use in Manhattan and its hinterlands.

In 1825 the Erie Canal opened, not only boosting tax income from vessels along the route but also permanently changing the supply chain of more bulky goods like cotton and timber from the Western states.[2] What George Rodgers Taylor has deemed “the canal era” saw the expansion of such waterways and resulted in exponentially cheaper transport of goods.[3] Likewise, advancements in steam travel, both coastwise and across the Atlantic, and railroad track expansions made it economically possible for produce from the Southern states to supplement and expand the seasonal fruits and vegetables produced in the North.[4] As such, New Yorkers became increasingly accustomed to the availability of fresh produce year-round. By mid-century, the limited winter stock of root vegetables in the city markets was assigned to a bygone era, as now oranges and watermelons from the Florida and Carolinas flooded abundantly into Manhattan.[5] 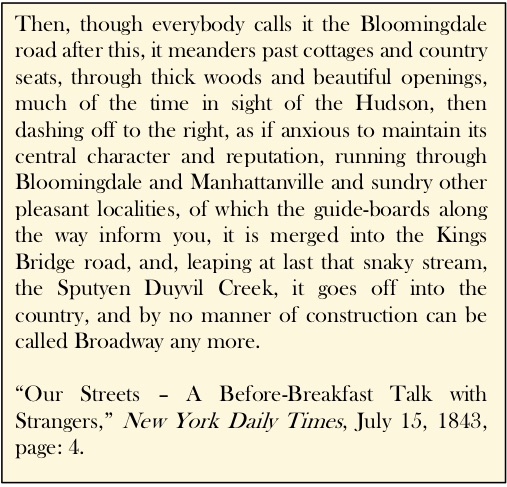 Perhaps the most impactful change to the local landscape and food supply of New York was the transition from extensive to intensive farming by Brooklyn, Queens, New Jersey, and the market gardens of Upper Manhattan.[6] The availability of cheaper products from the South and West, coupled with New York’s new demand for fresh produce inspired local farmers to shift from extensive livestock and grain production to intensive fruit and vegetable production.[7] Kings (Brooklyn) and Queens counties became famously prosperous produce growers. The close proximity to Manhattan’s public markets and the City’s seemingly insatiable consumption vegetables and fruits could make these farmers significant returns.[8] Indeed, nineteenth-century butcher-turned-historian Thomas De Voe wrote that “so great is the competition of market-gardeners, and so immense the demand for vegetables of all kinds, that all are sure to meet with a ready sale at remunerating prices.”[9] But even from the Island’s closest counties, the transport of goods proved difficult to navigate. Of course, steamboats across the East River were routine and fairly reliable, but farmers were required to pay for carting licenses and, upon arrival in the City, they had to jockey for positions in the increasingly overcrowded markets and pay daily for the privilege of vending there.[10] This proved a challenge for latecomers as “no less than sixteen hundred to two thousand wagons [paid] daily for the privilege of selling their vegetables” at Washington Market, the epicenter of the City’s produce trade.[11]

As such, farmers and market gardeners in Manhattan had somewhat of an advantage: the direct roads from the rural 12th Ward made transport more convenient. Likewise, they could set their own travel schedule unhindered by steamboat schedules. Indeed, the presence of such farmers and gardeners in the Test Book records of the downtown Emigrant Industrial Savings Bank (EISB) show that they frequently made the five-mile trek from Upper Manhattan to the urbanized city center where nearly all of the markets were located. 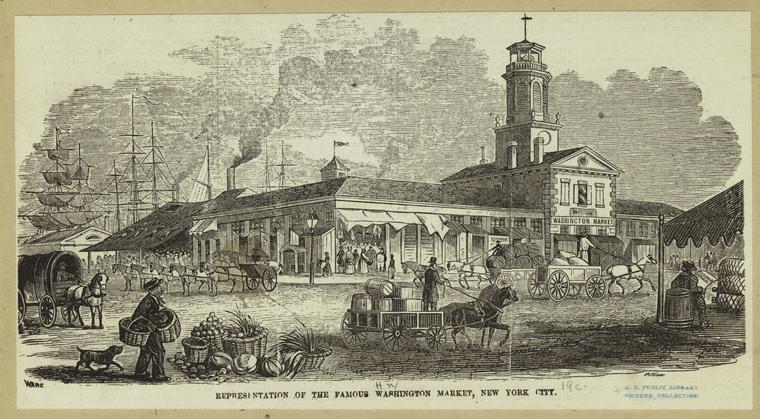 There were six men who reported their occupation as “gardener” in the EISB sample of 12th Ward residents between 1850 and 1860: one English, the rest Irish.[12] Their addresses were equally split between Harlem and Manhattanville, two neighborhoods that spanned large areas across the east and west side of Manhattan above 86th Street.[13] Only Edward Connor (account 13617) was single, the rest were married, suggesting the family-oriented style of farming so common in Ireland. Indeed, four of the five Irishmen came from the fertile provinces of Leinster (2) and Ulster (2) indicating that agriculture may have been part of their lives before emigration.[14] It seems of further importance that all of these men had been residents of the United States for ten years or longer by the time they opened their EISB accounts.[15]

Two such men were Edward Connor and his father, also named Edward. In 1850, the two lived in the fourth election district of the 12th Ward, with wife and mother, Margaret Connor.[16] Though the nature of their “gardening” enterprises remains elusive, it seems certain that they lived in close proximity to a market garden. Three other families are listed on the same page of the census – the Fays, the Harpers, and the Fitzpatricks – and the male heads of all of these households were also working in agriculture.[17] The father and son Edward Connor, Patrick Fay, Charles Harper, and Donald Fitzpatrick were all natives of Ireland and aside from Edward senior, were all in their early thirties.[18] Commonalities in age and nativity suggest a fairly close-knit agricultural community in the 12th Ward.

This community is of particular importance when considering 19th-century tropes of unskilled day labor among Irish men. At mid-century, “sons of Erin comprised 87 percent of the foreign-born laborers in the city. More than one-fifth of all the gainfully employed Irish living on Manhattan Island were laborers.”[19] As such, Irish men were often undistinguishable other than as laborers, just as Irish women were all assumed to be the domestic servant “Bridget.” Nevertheless, the demography of the 12th Ward Irish suggests a – perhaps unexpected – diversity in occupation this disputes the validity of such assumptions.

Take for example John Riley, who emigrated to New York in 1842 from Co. Cavan at age 24.[20] His whereabouts are unclear for nearly a decade until he opened ESIB account 3414 as a gardener in the 12th Ward.[21] By 1855, Riley, his wife Catherine, and their seven children were living in a frame house (worth an estimated $700) at the corner of 144th Street and 10th Avenue. The Rileys were therefore neighbors of both Daniel Devlin and Henry Hoguet and lived across the street from an orphan asylum.[22] The families listed alongside the Rileys on the 1855 New York Census are carpenters, laborers, and engineers: representing some of the more common 12th Ward trades (See male occupation chart).[23]

It seems likely that John Riley’s agricultural business often brought him to the south end of Manhattan. He opened five EISB accounts between 1852 and 1869 – two as trusts for his daughters – and made frequent and large deposits. As such, we can safely assume Riley sold his produce at market himself. As most Manhattan market gardens grew vegetables, it is most probable that he sold at the produce-oriented Washington Market which occupied a full block at Washington Street between Fulton and Vesey. Whatever the details of his product and business strategy, Riley was able to save significant sums. By the end of his transaction records, the cumulative balance of Riley’s accounts was $756.83 – equaling $14,787.98 today.[24] Similarly, father and son Edward Connor had amassed a modern equivalent of $29,570.79 by 1861.[25] And so the speculations by writers who saw possibilities for high returns in market gardening had merit. 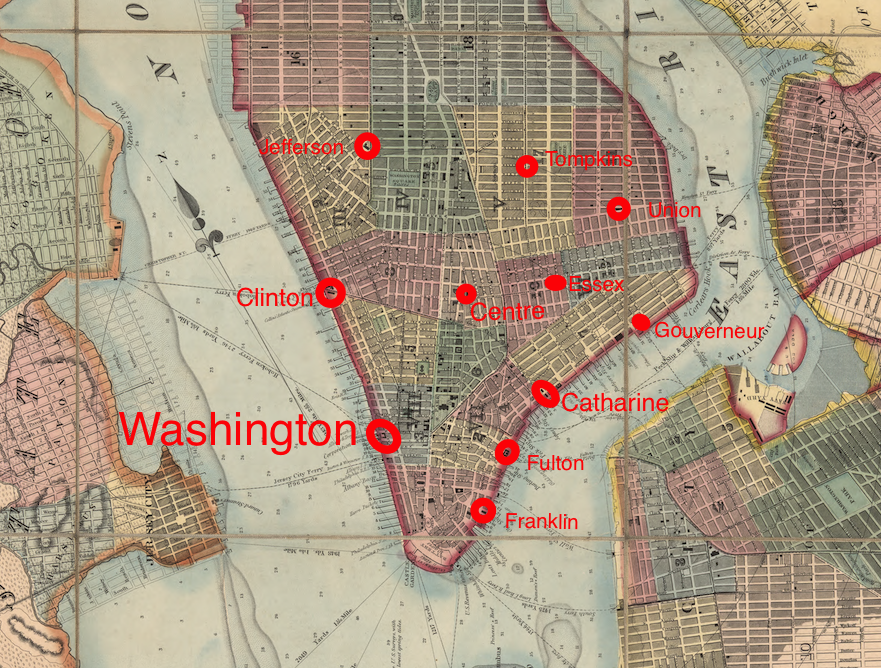 These market gardeners were not only significant contributors to the supply chain of America’s most bustling metropolis, but they also dispute claims that “that all Irishmen ever did was to dig ditches.”[26] Likewise, Manhattan’s gardeners and farmers operated on many complex levels. Often, farmers sold their stock wholesale to middlemen, who in turn resold the produce at an inflated rate.[27] But there were those who chose to pay the daily market stall fee and brave the frantically bustling market scene could make those high returns themselves. However, it seems that a fairly popular mode of sale was by a partnership with established produce dealers who operated in lower Manhattan. For example, “T. Gethins & Sons, Commission Dealers in Country Produce of all kinds,” established a storefront on Washington Street in 1861 and it was widely known that, “Consignments [were] received daily from the states of New York, New Jersey, and the West of all kinds of country produce, embracing choice domestic fruits, vegetables, and general garden products.”[28]

While Linder and Zacharias have focused on the presence of Irish farm laborers in Brooklyn at this time, it is evident that similar such enclaves existed in Northern Manhattan. It seems significant that there was such a population, as many historians have assumed that the Irish “association of farming with ‘impoverished potato patches’ and oppression in Ireland prompted few to seek such work in the United States.”[29] Though this group has remained overlooked in much of the historiography, perhaps due to the more informal nature of their industry – operating through middlemen and dealers rather than setting up their own storefronts – they nevertheless remain an essential sector in the provisioning of mid-nineteenth-century New York.

[1] Charles Dawson Shanly, “Along the Hudson River at New York,” The Atlantic Monthly: A Magazine of Literature, Science, Art, and Politics, XXII, no. CXXIX (1868), 3.

[4] Marc Linder and Lawrence Zacharias, Of Cabbages and Kings County: Agriculture and the Formation of Modern Brooklyn (Iowa City: University of Iowa Press, 1999), 68.

[6] Marc Linder and Lawrence Zacharias, Of Cabbages and Kings County, 31-32.

[7] Marc Linder and Lawrence Zacharias, Of Cabbages and Kings County, 35.

[8]  Marc Linder and Lawrence Zacharias, Of Cabbages and Kings County, 19.

[10] Marc Linder and Lawrence Zacharias, Of Cabbages and Kings County, 53.

[11] Marc Linder and Lawrence Zacharias, Of Cabbages and Kings County, 53.

[12] Database created Spring 2020 at New York University from the records of the Emigrant Industrial Savings Bank, 1850-1860.

[27] Thomas Farrington De Voe, The Market Book, Containing a Historical Account of the Public Markets in the Cities of New York, Boston, Philadelphia and Brooklyn, with a Brief Description of Every Article of Human Food Sold Therein, the Introduction of Cattle in America, and Notices of Many Remarkable Specimens (New York, Printed for the author, 1862), 426.

[29] Marc Linder and Lawrence Zacharias, Of Cabbages and Kings County, 90.