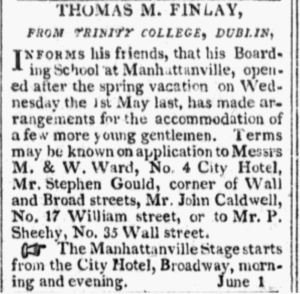 EIGHTY LOTS FOR SALE. – On Tenth Avenue, Manhattan, Lawrence, 128th, and 129th-sts. in Manhattanville, well located for immediate improvement by factories or dwellings.  The low price of lots, in comparison with other parts of the city, the present demand for houses there, the convenience of access by water, railroad and omnibus, make Manhattanville worthy of the attention of Manufacturers, Builders, &c.  Apply to SAMUEL E. SCHIEFFELIN, 106 John-st.  New-York Daily Tribune, February 10, 1851, p. 3 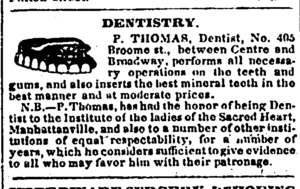 The dental health of the nuns at the Convent of the Sacred Heart in Manhattanville was overseen by Dr. Porter Thomas. Advertisement, Irish American, July 12, 1851, p. 4

DR. WILLS, VETERINARY SURGEON, FOR THE purpose of devoting all his time to horses sent to his infirmary for medical treatment, has given up his office in Thirteenth Street, but will visit the city daily for the purpose of attending to all orders left at or sent to the Union square Post Office before 12 o’clock, noon. Orders delivered to any of the drivers of the Manhattanville stages, will also meet with prompt attention. Veterinary institution, 100th street, Bloomingdale. Large and well ventilate loose boxes, and paddocks, the best in America.  The New York Herald, February 28, 1853, p. 7

Carelessly Shooting a School Girl. – A blacksmith named Patrick Garrity was yesterday arrested for carelessly shooting a small girl, who, with others, was playing in the yard of [the] public school, No. 28, at Manhattanville, on Monday morning.  The accused, with others was engaged in firing at a mark placed upon a fence, and directly in range of the play ground of the school, when a ball from his rifle struck a little girl named Mead, in the head, back of the ear, and then glanced off.  It is charged that the act was the result of gross carelessness, and he was held to bail by Justice Stuart in $1,000 to answer.  The New York Herald, October 19, 1853, p. 9

COUNTRY SEAT FOR SALE – AT FORT WASHINGTON, two miles north of Manhattanville, about thirty-five acres of land, together with an excellent dwelling house.  The extends from the Kingsbridge road to the Hudson river, and embraces a valuable water front.  It is beautifully wooded, of an excellent quality, and within about 1,500 feet of the Fort Washington depot.  The land adjoins on the north the residence of Montaignie Ward, Esq. and on the south the land lately purchased of Col. Monroe by the Deaf and Dumb Institution. The place is perfectly healthy, and the scenery most beautiful.  It will either be sold entire, or in plots of from two to five acres.  The house, with from two to five acres of land, is offered for sale or to rent.  Apply to C.S. Sloane, 68 Wall street.  The New York Herald, April 13, 1854, p. 4

On Friday last a duel took place between two “young bloods,” near Carmansville, which, however, resulted in nothing more serious than one of the gentlemen having the end of his nose skinned.  Frank Leslie’s Illustrated Newspaper, December 15, 1855, p. 15

STRAYED OR STOLEN — FROM THE COUNTRY SEAT corner of Tenth Avenue and 150th street, a pair of white swans.  A suitable reward will be paid for their recovery.  Address H.W.F., Manhattanville Post office.  The New York Herald, September 17, 1856, p. 3 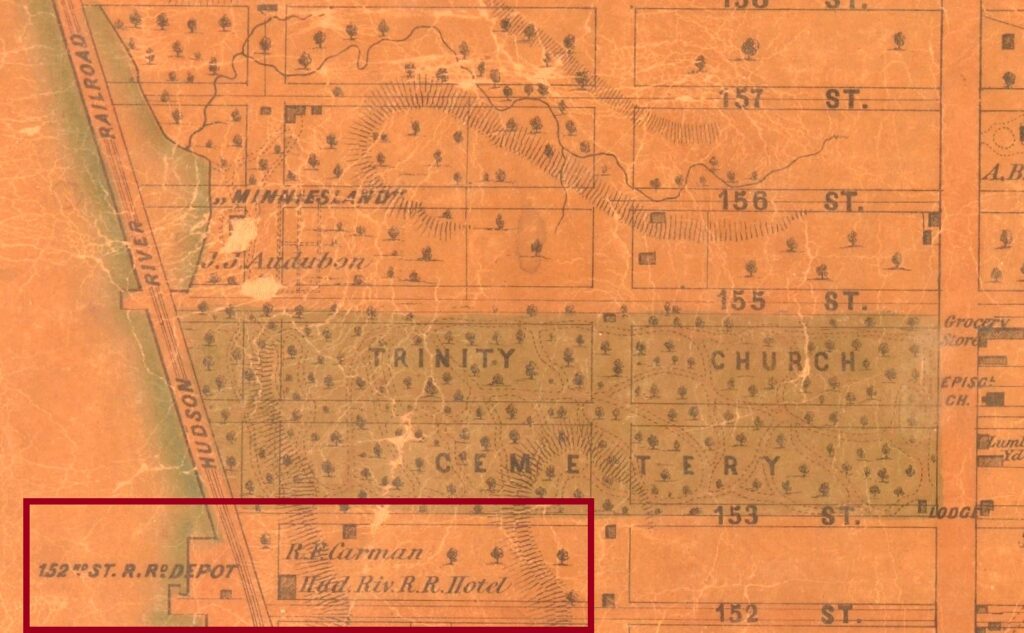 The Hudson River Rail Road Hotel advertised itself as “COUNTRY BOARD – ON THE HUDSON RIVER, FOOT of 152d street, Carmansville. The large and commodious house is now ready to receive families and single gentlemen. The rooms are large and airy, good heating, bathing and stabling. The Hudson River railroad cars, from Chambers street, stop at the house about every two hours. A steamboat stops morning and evening. Inquire on the premises.” New York Herald, May 17, 1857, p. 3. Detail, Dripps Map of that part of the city and county of New-York north of Fiftieth St., 1851, NYPL DigID 3883774. 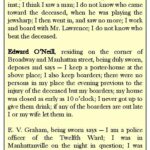 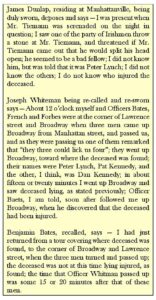 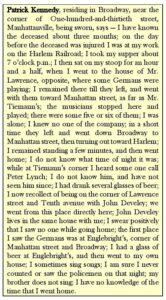 TO LET – A NEAT COTTAGE CONTAINING SIX rooms, with garden and stable, pleasantly located in Lawrence street, near Ninth avenue, Manhattanville; within a few minutes walk of the Hudson River Railroad and the Manhattanville and Bloomingdale stages.  Rent one hundred and fifty dollars a year.  Inquire on the premises.  The New York Herald, April 4, 1858, p. 3

ROBBING A CHURCH. – Some burglars broke into the Episcopal church at Carmansville on Wednesday night, and carried off a couple of silk gowns, valued at $35, belonging to the Rev. Mr. Smith, the rector. The burglars effected an entrance to the premises by forcing open one of the rear windows.  No arrest.  The New York Herald, April 23, 1858, p. 5

CHEMICAL SPERM CANDLES PATENT. MANHATTANVILLE, Candles. – A constant supply of this brand, an entirely new article, to which the attention of the trade is solicited.  For sale by HARGOUS BROTHERS, 33 South-street.  The Shipping and Commercial List and New -York Price Current, September 22, 1858, p. 2

–On Wednesday, a short distance below Manhattanville, a woman apparently 70 years of age, who was poorly dressed, and whose body was much emaciated, sprung directly in front of a down train upon the Hudson River road, and was torn to pieces by it.  Schenectady Reflector (NY), August 26, 1859, p. 4

Of JAMES SCALLAN, a native of Feddens, County Fermanagh, Ireland, who left New York in 1819 for the West.  Any information of him will be thankfully received by his sister, Susan Scallan, by writing to her to Carmansville, Post Office, New York.  Western papers, please copy.  The Irish American, October 8, 1859, p. 3

SCANLAN. – On Friday evening, Nov. 11, at his late residence, in Carmansville, corner of 160th street and Tenth avenue, Mr. JAMES SCANLAN, formerly of Kells, county Kilkenny, Ireland.  The friends, and those of his brother-in-law, Mr. Patrick McCarty, are respectfully invited to attend his funeral, this (Sunday) morning, at eleven o’clock.  His remains will be taken to Calvary Cemetery for interment.  The New York Herald, November 13, 1859, p. 6

The washing and drying establishment attached to the Convent of the Sacred Heart, in Manhattanville, was burned down on Wednesday night.  The belief is that the fire was caused by some sparks from a plumber’s furnace, as workmen had been engaged during the day in repairing the water pipes.  The New York Times, May 25, 1860, p. 8

This attempt at voter intimidation in Manhattanville was thwarted by the local police. A German-American Democrat, Charles Godfrey Gunther, won this election and was sworn in as Mayor of New York City in 1864. New York Times, November 5, 1863. 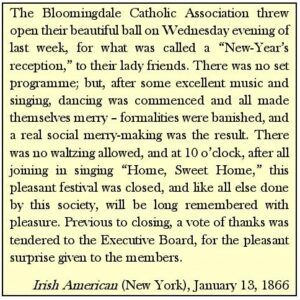 FAIR AT MANHATTANVILLE. – Yesterday a fair was opened at Washington Hall, One-hundred-and-twenty-fifth-st., Ninth-ave., under the superintendence of the Rev. A. Kissoler the pastor, and the Catholic women of Manhattanville. The entertainment is for the benefit of St. Joseph’s Church.  New York Tribune, June 12, 1867, p. 8 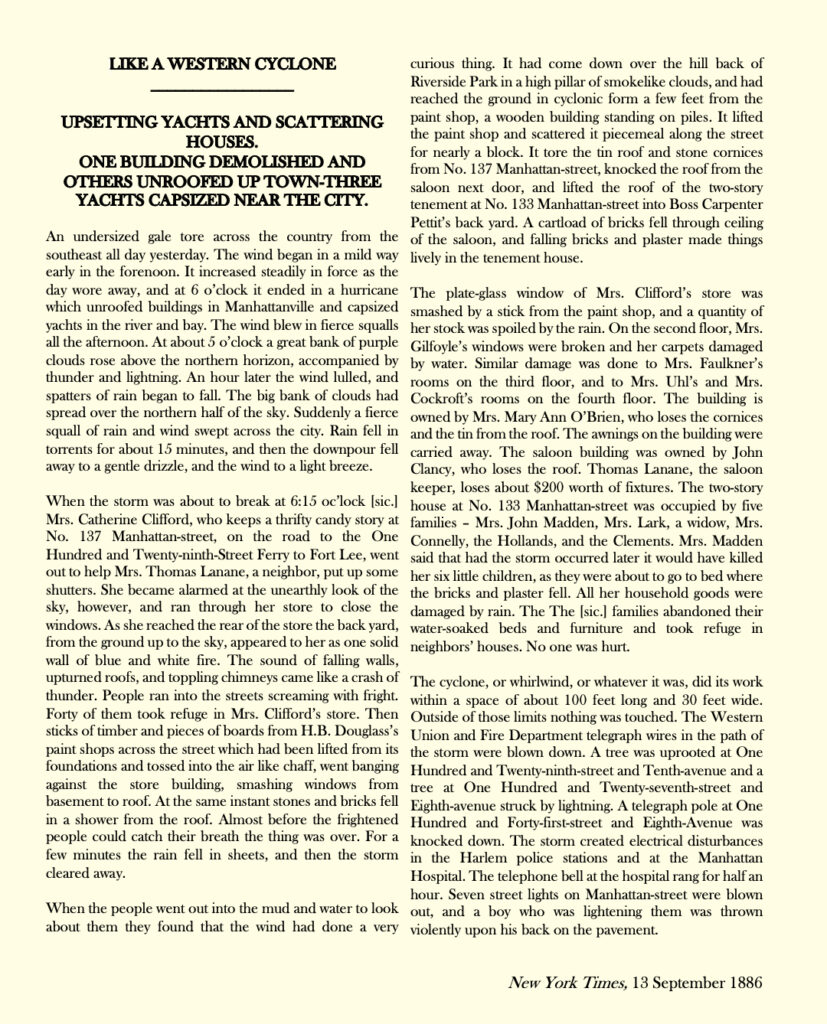 This 1886 New York Times article, in addition to documenting the outrageous weather residents of the Twelfth Ward experienced, captures the Irish nature of the community in the Twelfth Ward as well as highlights female entrepreneurs that fueled local business in the area. While some of these streets may seem unfamiliar to New Yorkers now, Manhattan Street is now St. Nicholas Avenue, one of the main streets running through contemporary neighborhoods such as Washington Heights. 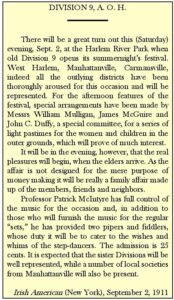 There were 45 division of the Ancient Order of Hibernians, an Irish Catholic fraternal organization, in New York County by 1879. Division 9 in the Twelfth Ward was still going strong in 1911. In 2020 Division 9 meets once a month in the Bronx.