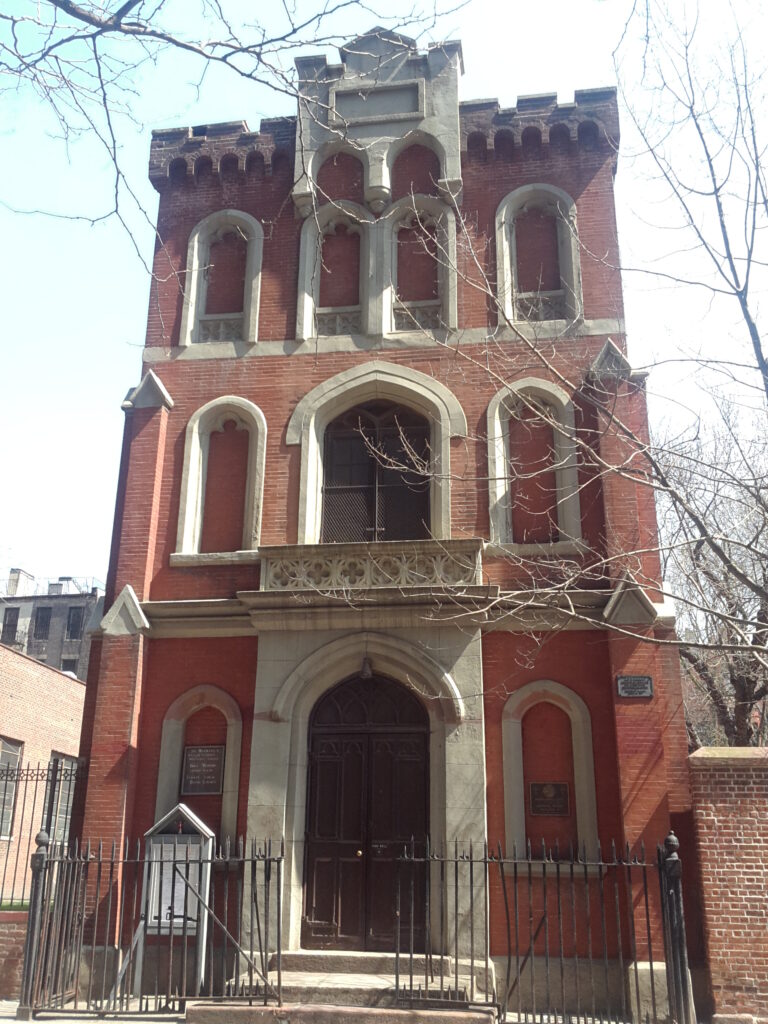 RULES AND REGULATIONS OF CALVARY CEMETERY  (1876)

3. When interments are to be made in purchased ground, notice must be given at the Office in New York, or to the Superintendent at the Cemetery, before 4 P. M. on the day previous to the interment, except for interments on Sunday, notice of which will be required before 12 P. M. Saturday. 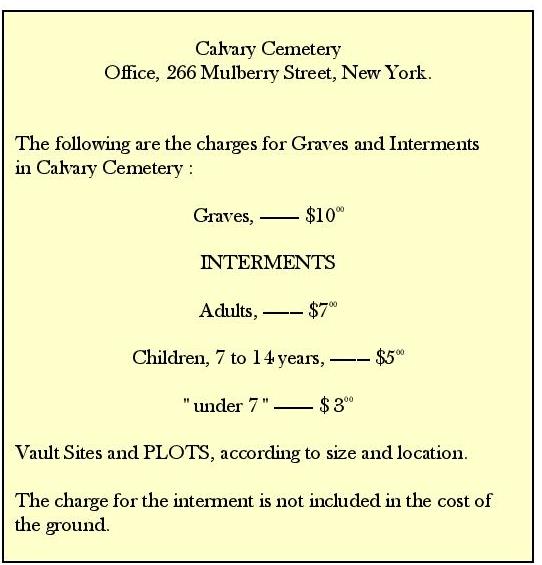 5. The Certificate of Purchase must in every instance be shown, when parties require a Grave to be opened ; and the name of the person to be interred therein must also be given. If owning more than one Grave, they must state the number of the one in which they then wish to inter.

6. In case of the loss of a Certificate of Purchase of Ground in Calvary Cemetery, no copy of the same will be issued except to the owner thereof; and in such case satisfactory proof of said loss must be presented to the Superintendent of the Office at No. 266 Mulberry Street, New York.

7. Interments, where no ground has been purchased, must take place in such Graves as may be opened for their reception, or as the Superintendent of the Cemetery may direct. Certificates, stating the precise spot of such interment, may be obtained from the said Superintendent, if applied for within one month after the date of burial, and by giving one day’s notice.

8. No removal will be allowed to be made from May 1st to November 1st, unless permission be given by the General Superintendent.

9. All Carriages and Hearses, immediately on entering the Cemetery, must pass along in single file, keeping the right-hand side of the road to the Section of the ground in which the interment is to be made, and only to remain at the Church during the service.

10. Drivers of Carriages must remain with their teams, and leave their boxes only when it may be necessary to take up or let down passengers.

11. No vehicle will be allowed to pass through the Cemetery at a rate exceeding four (4) miles an hour. 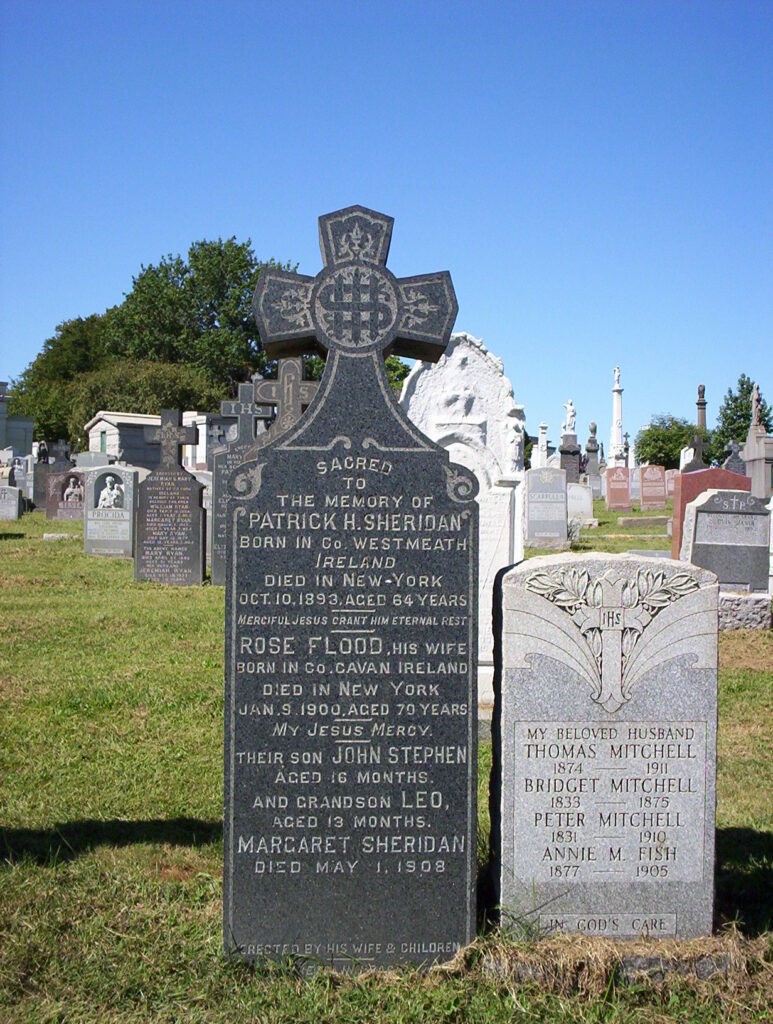 12. All Monuments or Headstones must be erected on foundations of solid masonry, sixteen inches in thickness, and to the depth of at least nine feet.

13. Railings or inclosures must be built according to the grade of the ground, and on solid masonry, sixteen inches in thickness and nine feet in depth, as must also all Columns, Posts, etc., for inclosures. 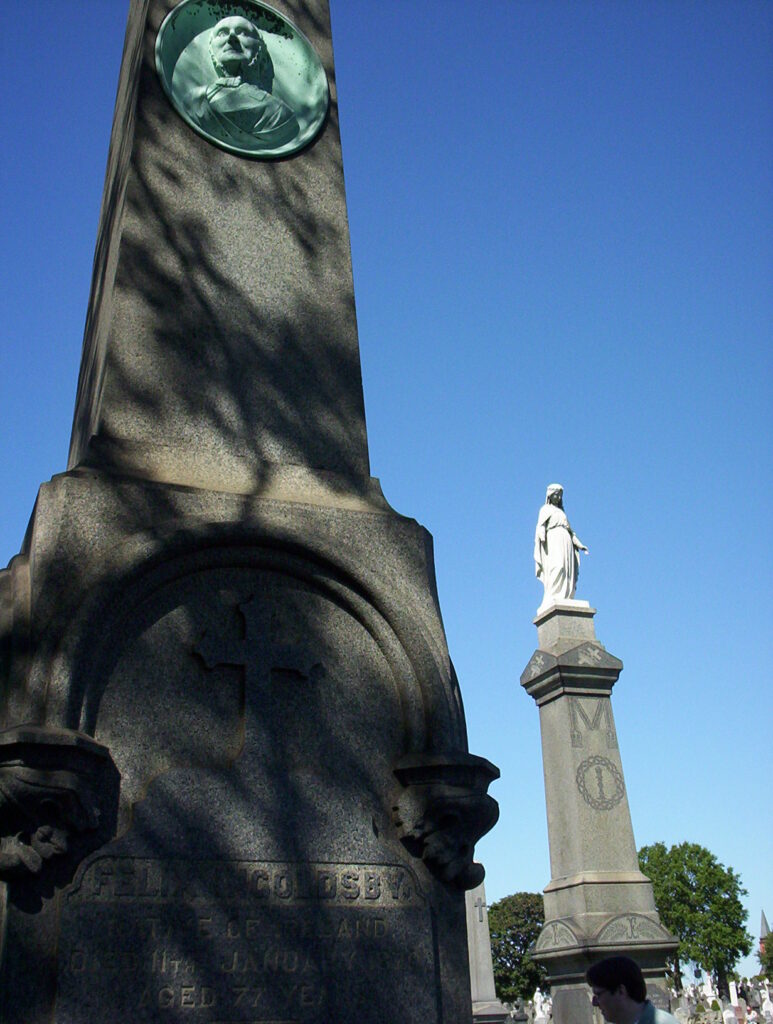 Felix Ingoldsby’s monument, Calvary Cemetery (2007). The Visitor’s Guide to Calvary Cemetery (1876) includes these remarks: “The monument to the memory of this well-known and much-honored merchant of New York City is situated in Plot K, Range 4, and is of Quincy granite, thirty- three feet high. The main column is composed of one block twenty-two feet in length. On the face of it will be perceived a fine profile, in bronze, of the deceased, his well-known features being easily recognized.

“He was respected by every one who knew him ; loved and reverenced by his friends ; a man who seemed to live and to enjoy life only to do good. The affection of his relatives, the attachment of his friends, could not protract his life on earth.

“Felix Ingoldsby was born in 1793, at Ballinamore, County Leitrim, Ireland. While he was yet a child, of some five years of age, his respected father was seized and imprisoned in the troubles of 1798, for the crime of loving his country. The father found means to escape, and came to this country in the year 1800.

“Mr. Ingoldsby, the deceased, was the favorite nephew of an excellent Irish priest of the same name, who promoted his education with the desire of having him enter Holy Orders. But God had given him a different vocation. Not as a priest, but as a layman, with the luster and purity of a true Catholic gentleman, he was to serve God in his generation. He went to Dublin under the care of an uncle, a Mr. Eagan, an eminent hardware merchant. Having made himself thoroughly acquainted with all the mysteries of this business, he came to the United States in 18 18. His first engagement was with a hardware house in Charleston, S. C. This house found him so far better instructed than they, that they soon committed their fortunes into his hands, and he made their purchases in England and New York. His business capacity and knowledge was seen by others, and he was solicited to dissolve his connection with the Charleston house. Honor was the law of his life, and he would not do it, till the term of his business engagement was at an end.

“Then, over fifty years ago, he came to New York. He was, first, a junior partner, and afterward a senior partner, of an honorable hardware importing house in this city. His life in New York is known to all the reputable old Catholic residents of the city. He was here when the number of wealthy and influential Catholics of New York was small. Whatever was to be done for religion, or for charity, or for the public good, counted Felix Ingoldsby as a liberal contributor. An old friend, who knew him well, once said, ‘Others do generous things, and like to have it known. Ingoldsby always wanted to make it a condition of his generosities, that his name should not be mentioned.’

“He carried with him to the hour of his death the quiet and resolute character of a man that, doing good on all sides, strove to keep a conscience void of offense before God and man.”

Ingoldsby was a friend of Archbishop John Hughes, the President of Calvary Cemetery’s Board of Trustees, as well as an officer of the Emigrant Industrial Savings Bank.

14. Crosses attached to Monuments or Headstones, must be fastened with iron dowels, and properly leaded.

15. The Section, Range, Plot, and Number of Grave, must be inscribed at the bottom of all Headstones, in legible figures and letters. Footstones are strictly prohibited.

16. Persons having Monuments, Headstones, etc., already erected, and not secured in accordance with these Rules, and who neglect to have them so secured, will be held responsible for all damage which may be done by the falling of said Monuments or Headstones on or against those belonging to other parties.

17. Wooden inclosures, crosses, and lettered boards designating Graves, will not be permitted.

18. Plaster images, toys, or similar articles, will not be permitted on Graves or in Plots.

19. All Vaults must be built of stone, granite, or marble, and furnished in such a manner with shelves and partitions that interments can be separately made. After such interments, the compartments are to be perpetually sealed, in order to prevent the escape of an unpleasant effluvium. No Vaults will be permitted to be built above ground, except in such parts of the Cemetery as may be reserved for that purpose.

20. The Trustees reserve to themselves the right of preventing or removing any erection or inclosure which they may consider injurious to the immediate locality, or prejudicial to the general appearance of the Cemetery ; and of removing or pruning any trees or shrubbery which may mar the effect and beauty of the scenery, or which will encroach upon or interfere with other Plots or Graves.

21. No Headstone, Cross, or Device of any kind shall be erected on any Grave, where the right to the ground has not been purchased.

22. No Headstone shall be set up without giving previous notice to the Superintendent of the Cemetery, in order that it may be determined if it be of allowable dimensions, placed in the right spot, and in a proper manner.

23. The construction of Vaults, the inclosure of Plots, the erection of Monuments, Headstones, etc., and the men employed thereat, shall be under the control and direction of the Superintendent of the Cemetery, who shall have power to immediately suspend the work and workmen, whenever there is a failure to conform to these Rules and Regulations.

24. ‘No Contractor, or other person, will be permitted to perform any work in the Cemetery, such as the inclosure of Plots, the erection of Monuments, Headstones, or any other testimonial, until the possessor of the Plot or Grave shall have received a certificate or permit designating the work to be done, and the party or parties employed, signed by the Superintendent of the Cemetery, and countersigned by the Chairman of the Committee on Cemeteries, or the Secretary of the Board.

25. No Contractor will be granted a second permit until the work for which he received the previous one shall have been completed.

27. No person employed by this Board, in or about Calvary Cemetery, shall be interested, directly or indirectly, in any contract or agreement for the erection of Monuments, Headstones, Railings, or for any work whatever not directed or paid for by the Board ; nor shall they solicit, or permit others to solicit, orders for such work, within or about the gates of the Cemetery. All employees of the Board will be held to strict accountability for any violation of the above Rules ; and any such violation will be followed by immediate discharge from employment. Persons contemplating the erection of testimonials to the memory of their deceased friends, are respectfully requested to report any infringements of the above Rules to the Superintendent in the Cemetery, or at the Office, 266 Mulberry Street, New York.

28. Persons having refreshments of any kind will not be permitted to enter the Cemetery ; neither will smoking be allowed, nor will dogs be admitted.

29. All persons are prohibited from picking any flowers, either wild or cultivated, breaking any tree, shrub, or plant, or from writing upon, defacing, or injuring any Monument, fence, or other structure, within or belonging to the Cemetery; and if detected in violating this section, will be arrested by the police, and punished according to law, as provided in such cases.

30. Trespassers, or persons disturbing the quiet and good order of the place, by noise or other improper conduct, or who shall violate any of these Rules, will be instantly compelled to leave the Cemetery, and punished as provided in Section 29, if there be just reasons therefor.

31. The persons placed at the gates are charged to prohibit the entrance of all improper persons, as well as those who may be known to have at any time willfully transgressed the Regulations of the Cemetery.

32. Boys are strictly prohibited from performing any work in the Cemetery, and the Superintendent is hereby directed to enforce these Rules of the Board of Trustees.

33. All interments in this Cemetery shall be strictly in accordance with the rules of the Catholic Church.

*The Catholic public are informed that the men employed at the Cemetery are positively forbidden to receive, under any pretense whatever, any remuneration for services rendered.

*Holders of Certificates of Purchased Plots or Graves are requested not to give their Certificates to Contractors for the purpose of having Monuments, Headstones, etc., erected, but to get a Permit for that purpose themselves at the Office in the Cemetery, which they can leave in the possession of the persons employed to do the work.