We began with a dataset drawn from the records of the Emigrant Industrial Savings Bank, held by the New York Public Library and digitized by Ancestry.com.  This consisted of 194 people with an address on Mott Street, between Chatham Square and Grand Street (i.e. Nos. 1-151 Mott) who were associated with 257 distinct accounts, some jointly held.

There were 188 people who reported their place of birth; the ethnic distribution, while predominantly Irish, reflects contemporary emigration from Germany, Poland and Prussia too: 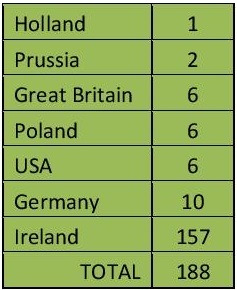 Number of people with lower Mott Street addresses, by nativity, who opened accounts with Emigrant Savings Bank between 1850 and 1860. Table by Marion R. Casey, Spring 2017. 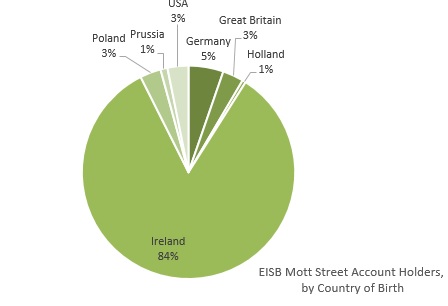 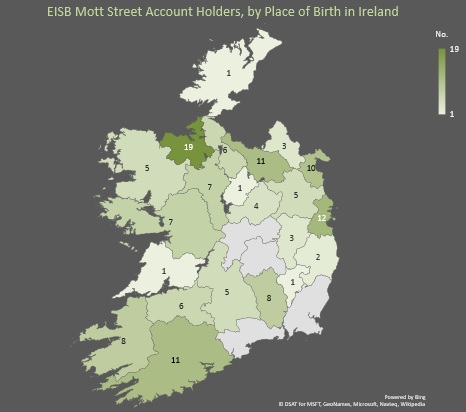 Distribution of 141 Irish immigrants who opened an Emigrant Savings Bank account with a Mott Street address south of Grand Street, between 1850 and 1860. While concentrations from Sligo, Dublin, Cavan, and Cork are not unexpected for this time period, the unusually high number from Louth indicates a specific family chain migration. An additional 14 people were from Ulster counties currently part of Northern Ireland and not depicted on this map: Tyrone (7), Fermanagh (3), Down (2), Armagh (2). Map created by Marion R. Casey, Spring 2017. 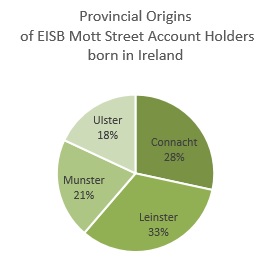 Of the 155 Mott Street account holders who gave a county of birth in Ireland, the majority were from Leinster or Connacht. Chart by Marion R. Casey, Spring 2017. 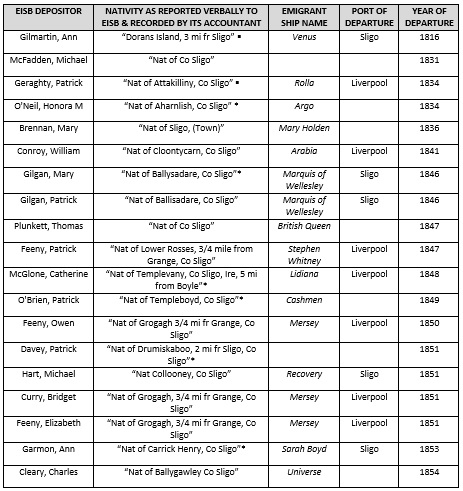 Nineteen accounts at Emigrant Savings Bank were held by these men and women from Co. Sligo who lived on Mott Street south of Grand Street in the 1850s. * Correct spellings of these townlands or localities are Ahamlish, Ballisadare, Templevanny, Templeboy, Drumaskibole, and Carrickhenry.  Neither of these locations are identifiable in Sligo from the historic Ordnance Survey of Ireland maps (https://www.osi.ie/products/professional-mapping/historical-mapping), IreAtlas (http://www.thecore.com/seanruad), or Irish Townlands (https://www.townlands.ie) “Attakilliney” may be an incorrect transcription; possibly “Altakillinny”? Griffith’s Valuation records a townland called “Doran’s Island” in Ballinchalla, Co. Mayo. Chart by Marion R. Casey, Spring 2017.

By far, Sligo natives outnumbered EISB Mott Street account holders from any other county in Ireland, reminding us of the long-standing pre-Famine links between this part of Ireland and New York represented by the Nealis family.  The most well-known exodus from Sligo was underwritten by Lord Palmerston in the middle of the century, primarily from his estate along the coast north of Sligo town.  Honora O’Neil’s emigration from Ahamlish in 1834 (the date may have been off by a few years as she was recalling it more than twenty years later for the EISB accountant) may indicate that she was among the first of Palmerston’s tenants to opt for emigration when he undertook ‘squaring’ – a transformation of the historic farm holdings in the area. Among those who strenuously protested such modernization efforts was a member of the Feeny family; it is perhaps not uncoincidental that Patrick, Owen and Elizabeth Feeny as well as their widowed sister Bridget Feeny Curry emigrated to New York, settled next door to each other at Nos. 100 and 103 Mott Street and opening savings bank accounts.  Their arrival between 1847 and 1851 does not make them Famine refugees per se since Palmerston’s “programme of emigration” acted as “a safety valve;” their inducement, however, was most likely the threat of eviction so it was not necessarily voluntary.  [1]

The emigrants from Co. Louth in this dataset are almost entirely part of the extended Pentony family from Stabannon, although the name is historically associated with the Drybridge and Tullyallen area.[2] 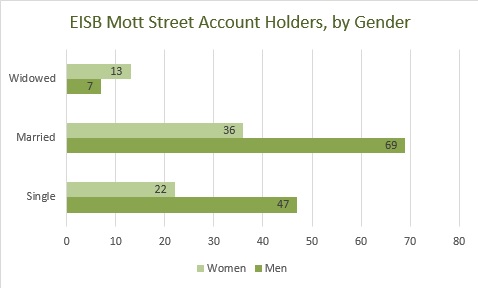 In general, most were married when they opened their account with Emigrant Savings Bank. When these figures for gender and marital status are additionally correlated with Irish nativity (i.e. datasets of 194 vs. 156), there is very little change proportionally. Chart by Marion R. Casey, Spring 2017.