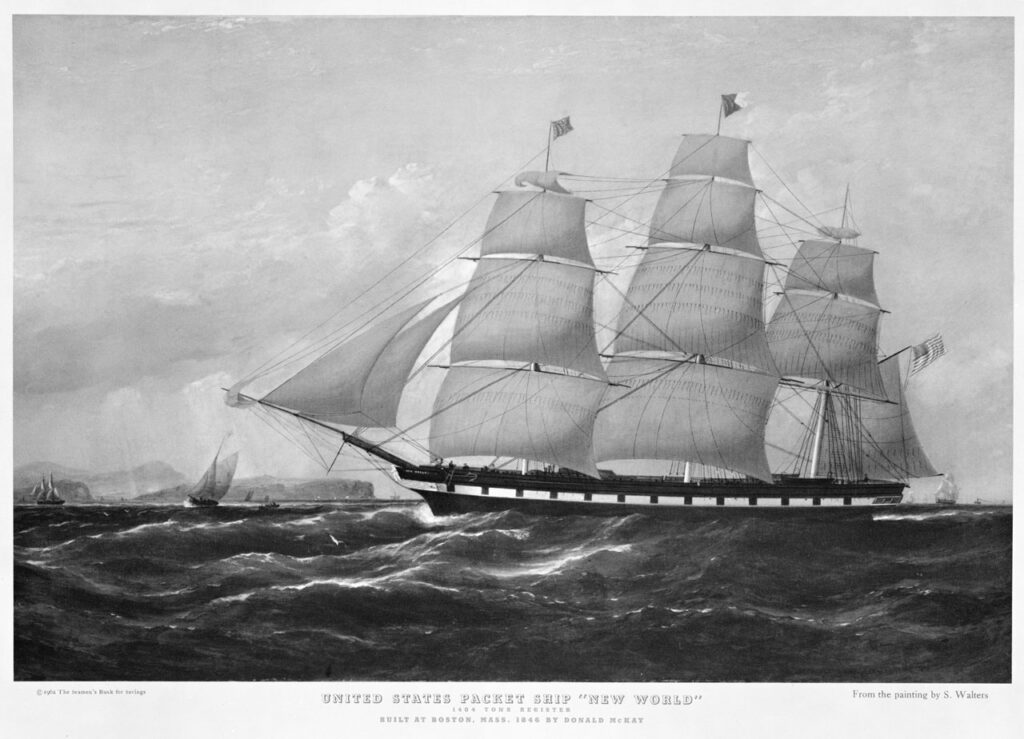 Wednesday, September 9, 1846 was a day of immense anxiety for workers and a crowd of spectators in the East Boston ship yard as Donald McKay prepared for the launch of his latest creation, the New World[1]. Renowned as the largest merchant ship in the world during its prime and the first three-decker ever built in the United States, the New World immensely advanced the career of its ship-builder [2]. 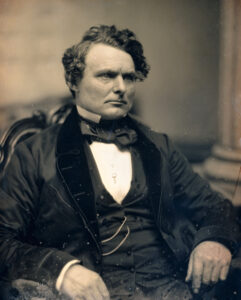 Donald McKay hailed from Shelburne, Nova Scotia but learned the shipbuilding trade in New York where he was indentured to Isaac Webb. Established in 1818, Isaac Webb’s shipyard began the careers of some of the best shipwrights of the century, including John W. Griffiths and Webb’s son William[3]. Not only learned essential ship building skills, but also how to treat fellow workers with respect. After mastering the trade, McKay moved to Boston and worked with Enoch Train and Grinnell, Minturn, & Co.’s Swallowtail Line[4] Praised for its pleasant, swift trans-Atlantic crossings, passengers could pay $140 to sail from Liverpool to New York under the service of men such as Captain William T. Skiddy and Captain Hale “Chivalrous” Knight[5].

Under the commission of the Swallowtail line, the 1404-ton New World could transport more than four hundred passengers if lack of freight permitted[6]. Despite newspaper articles that circulated regarding smooth passages and the efforts by Captain Knight to defend his honor as a shipmaster, the dark reality of the passage on the New World reveals a journey ridden by threats to livelihood through disease and violence[7]. Moreover, throughout the passage on the New World, brandy became a means of both fortune and fatality. 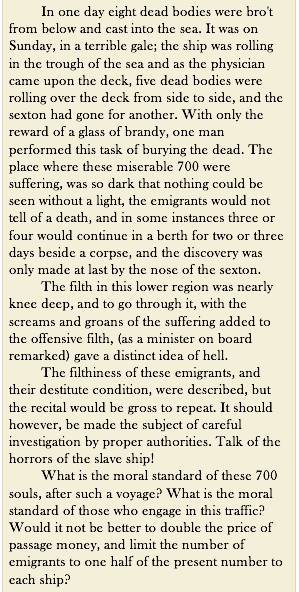 On Saturday August 21, 1847, Thomas Molloy set sail on the New World in Liverpool, ready to embrace the opportunities in America[8]. After a quick inspection of his well-being, he scrambled onto the ship alongside forty-seven desperate passengers in a stampede. With nothing more than biscuits and salt beef to sustain him over the next month, it is no wonder that the passengers and crewmembers turned to the “coffee royal” made with brandy to brighten their spirits. During the passage, brandy would be sold once or twice a week to passengers and thus became profitable for the captain to sell. Often, because water was contaminated by casks, brandy would be the safest liquid to drink[9]. Due to the rapid rate that passengers were dying from disease, brandy was given on the New World by the surgeon as medicine. However, the spirit also led to troubling circumstances. On board the New World, a drunken seaman who lost his bottle of liquor stabbed another man in a drunken fervor[10].

Despite the rampant disease and violence that plagued the trans-Atlantic passage, Molloy arrived in New York on September 21, 1847[11]. The young errand boy Thomas would soon become subject to the ill conditions that he knew all too well during his time in Ireland. After being cleared for fitness, Thomas became surrounded by runners upon exiting the boat, hoping to lure him to a tenement house. Shoved into unsanitary, crowded conditions with fellow emigrants, Thomas would be tasked with finding employment, whatever the cost may be. If these Irishmen fell under poor circumstances and turned to drink, they may be scolded for their lack of inhibition and faith in an anti-immigrant and anti-Irish America.
Fortunately, Thomas had the ability to reunite with his father who had already immigrated to New York and established himself with work. Hearing news of a job opening as an errand boy in Ward’s Island, Thomas capitalized on the opportunity and began his American dream.
For thirty-six years, the New World led thousands of emigrants into fame or misfortune. Sold to Austrians in London on January 19, 1882, the New World became Rudolph Kaiser and finished its career in 1884.