In 1855, a third of the population of New York County’s rural Twelfth Ward, located north of 86th Street, were natives of Ireland.  Older parts of the City with a comparable 6,000 Irish-born included the First Ward (the Battery district), the Fifteenth Ward (Washington Square), and the Nineteenth Ward (east side between 40th and 86th Streets).[1]  Despite this, a one-dimensional portrait of mid-century Irish New York continues to associate them with dense, run-down neighborhoods like the Sixth Ward’s Five Points.

The Twelfth Ward Irish – with distinct concentrations from Co. Cork and King’s County – lived in four villages scattered on the upper part of Manhattan island, stretching to what today is Washington Heights and Inwood.  These were Bloomingdale, Harlem, Manhattanville, and Carmansville.  Using various sources, including the records of the Emigrant Industrial Savings Bank, these Irish women and men are profiled here and contextualized towards understanding experiences that were at once the same and yet quite different to those of their countrymen living downtown.  Their lives challenge us to expand our understanding of the New York Irish. 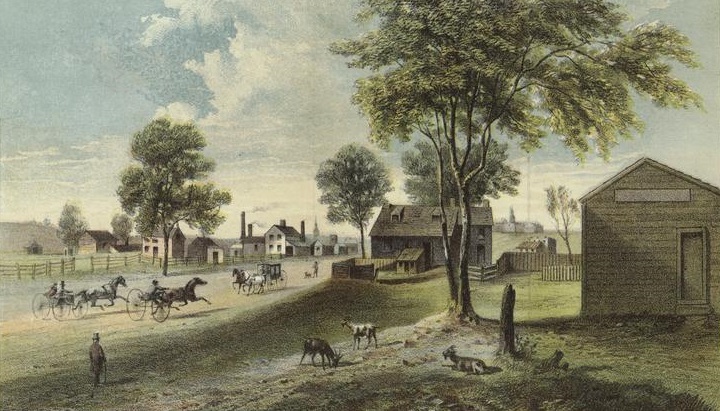 In 1868, Charles Dawson Shanly, enroute to the City, observed the Twelfth Ward in an essay for the Atlantic Monthly. “The road that leads by Washington Heights to New York…is the most picturesque route to the city from the land side.  It winds past villas that stand on sloping lawns…Evidence of wealth and culture meet the eye everywhere.  Gate lodges give an air of European aristocracy to the locality…Trim hedges of beautiful flowering shrubs border the gravel walks that lead from the road to the villas. Cows of European lineage crop the velvet turf in the glades of the copses. Now and then the river is shut out from view, but only to appear again in scenic vistas.”[2]

Indeed, the Sanitary Inspection of the Twelfth Ward in 1865 confirmed this but also noted a widely scattered population living in a variety of conditions among the district’s hills. Dr. L.A. Rodenstein wrote, “The general aspects of the country present still some of its natural scenery.  A few streets have been cut through the hills, and a few of the avenues, partly traverse the length of this portion of the Island. In the upper part of the district fresh country air may still be inhaled, and the luxury of rural enjoyments indulged in.”  On the residents of the Twelfth Ward, Rodenstein remarked, “Along the banks of the Hudson are the stately mansions of the rich, with the usual complement of domestic servants, gardeners, hostlers, coachmen, stable-boys, etc.  The inner portion of the island is dotted with public institutions and small settlements of laborers.  The Irish predominate, and next come the Germans; other nationalities are also represented.  Many of them work in the Central Park, others in the factories, foundries, or on the public roads.”[3]

The following pages examine the Twelfth Ward, using a variety of nineteenth century primary sources that complement a dataset of 179 residents who had accounts with the Emigrant Industrial Savings Bank in the 1850s and 1860s. Among the unique Irish stories that have emerged from, or been extended by, this research are