One of the most rewarding facets of the Prince Street study in terms of new perspective arose from investigating the EISB accounts themselves.  Of the 68 qualifying Prince Street account holders, 51 (75%) of the accounts still exist in the record books of the EISB.  From these, data has been extracted and graphed using the High Balance of each account.  By analyzing the data separated into male and female as well as skilled vs. unskilled, a much more detailed view of Prince Street’s Irish community can be formulated  Furthermore, the graphed data is also separated into two other categories – with and without the account of Jeremiah Walsh.  In this study, the account of Mr. Jeremiah Walsh is viewed as a bit of an anomaly.  With a High Balance of $6,000 (approximately 5 times that of the second highest account), a limited amount of biographical data present, and the fact that the account is listed as a trust for one Patrick Draddy, the Walsh account (#4569) has been removed from he second set of graphed data.  Removing this account reveals an intriguing trend within the Prince Street data in regards to both labor and gender. 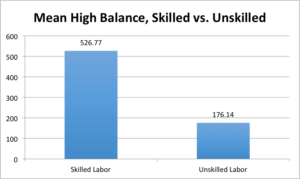 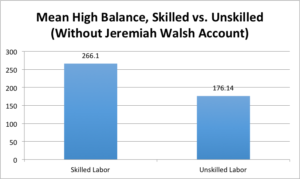 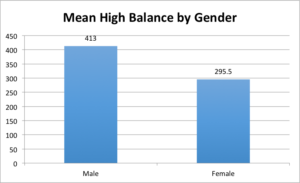 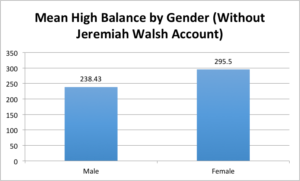 (Left)  Note: this set of graphed data makes no distinction between Skilled and Unskilled.  Even with the majority of qualifying EISB accounts being held by men, we see a disparity of only $117.50 between male and female account holders’ Mean High Balance.  (Right)  Incredibly, when the anomaly of the Walsh account is removed, we find that the Female Mean High Balance is greater than the Male Mean High Balance by $57.07.  Even though fewer accounts are held by women and the majority of the women represented in this study are Unskilled Laborers, the average savings of women on Prince Street is higher than their male counterparts.  The deciding factor for this trend could be that Domestic and Housekeeping work, the occupation of the vast majority of Prince Street EISB account-holding women, claims a higher degree of job security/longevity and a higher average pay grade than other forms of unskilled work.  There are also the instances of women working in high-paying, skilled fields – most commonly in the clothing industry.  For example; Catherine (a Dressmaker) and Jane (a Shirtmaker) Brannick, sisters from Loughrea Co. Galway living at 19 Prince Street, could claim a combined high balance of nearly $500.  Perhaps more unique among the skilled female workers was Elizabeth Harlin, a compositor from Castletown Co. Meath.  An occupation steeped in organization and guild membership, a compositor would have been firmly established in the skilled working community.