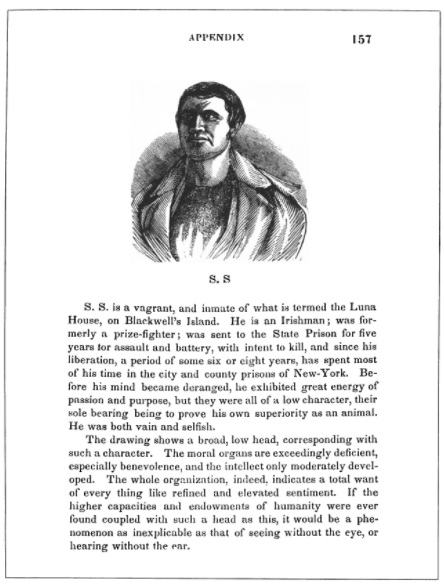 The physiognomy of a pre-Famine Irishman who spent five years in Sing Sing is described in this example of the pseudo-scientific theories about the roots of crime common in the middle of the nineteenth century.  Marmaduke Sampson, Rationale of Crime, and its Appropriate Treatment : being a treatise on criminal jurisprudence considered in relation to cerebral organization (NY: D. Appleton & Co., 1846), p. 157.

Eighty-five men, all natives of Ireland, were admitted to Sing Sing in 1870.

Eighty-six percent of Irish-born prisoners in Sing Sing in 1870 were Catholics. Although the majority of the New York Irish at that time were also Catholic, there may have been bias in the arrest and sentencing of Irish Catholics since anti-immigrant nativism and prejudice were common.  This makes the twelve Irish Protestant prisoners an interesting case study, especially since their surnames cannot predict religious affiliation.

Ten out of the twelve Protestant prisoners gave an address in Manhattan when they were admitted to Sing Sing. However, when looking at the exact addresses and locations of where the prisoners lived when they were arrested, there is no pattern that makes these arrests significant to each other. This suggests that Irish Protestants were integrated with Irish Catholic populations, as in the first, fourth, and seventh wards along the East River waterfront or in the sixteenth and twentieth on the west side above 14th Street.

The range of crimes committed by the Irish was the same, regardless of being Protestant, for example, 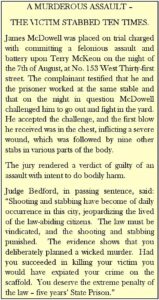 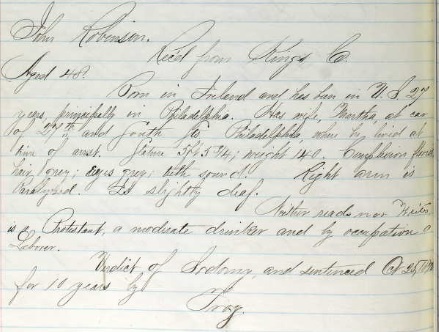 Of the 85 Irish-born prisoners in Sing Sing in 1870, sixty-five were moderate drinkers, making up 76% of the selection, while fourteen (16%) were temperate, and four (5%) were intemperate. Two prisoners did not report their alcohol use, or it was not recorded. 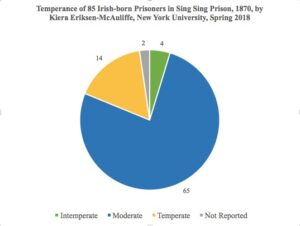 Based on the four inmates who were categorized as ‘intemperate’ in this sample, there is little to no correlation between intemperance and crime, despite common thought at the time that intemperance was a cause of crime. All four committed either burglary or larceny, neither of which were considered violent crimes.  In contrast, the Irish prisoners convicted of violent crimes were either temperate or moderate drinkers. Since Grand Larceny was the most common reason Irish men were committed to Sing Sing, inmates of all degrees of temperance are represented in this subset: 2 out of the 4 intemperate prisoners committed this crime, 17 moderate drinkers out of 65 were locked up for it, and 6 of the 14 temperate men were admitted for it as well. 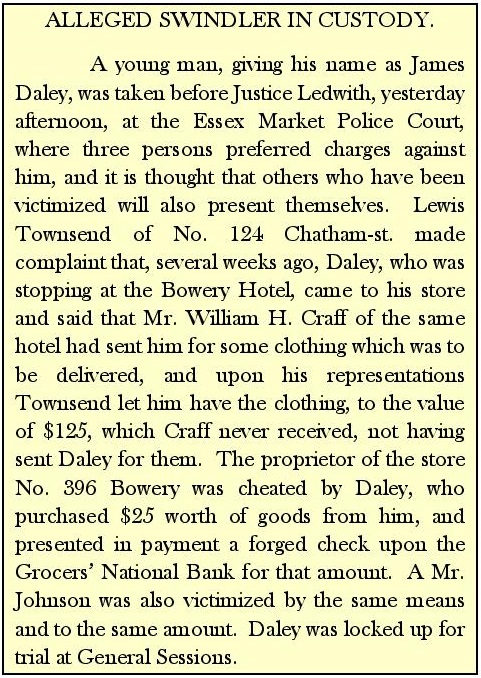 New York Tribune, 23 April 1870, p. 5. James Daley, a 36 year old Catholic bookkeeper, was one of the four “intemperate” Irish inmates in Sing Sing in 1870. He was convicted of “grand larceny by trick and device” on May 27th, a crime of some sophistication and planning that suggests he was not under the influence of alcohol all the time. New York Tribune, 28 May 1870, p. 2.

Three out of the four men in Sing Sing who were classified as intemperate were Catholic and one was Protestant, showing that religious belief did not always equate with teetotalism. 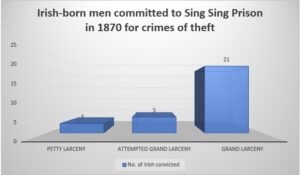 Distinctions of petty and grand indicate the value of the item or items stolen. Created by Kieran Brown, New York University, Spring 2018.

While many Irish in New York in the middle of the nineteenth century found success in different walks of life, others fell into the trap of crime. A third of the 85 Irish-born inmates in Sing Sing prison in Westchester County in 1870 had been convicted of larceny, which is defined as the unlawful theft of someone’s property without the use of force. According to 2018 Federal Bureau of Prisons statistics, only 4.7% of inmates are serving sentences for Burglary, Larceny, or Property Offenses, indicating a significant shift in reasons for incarceration since the 1870s. 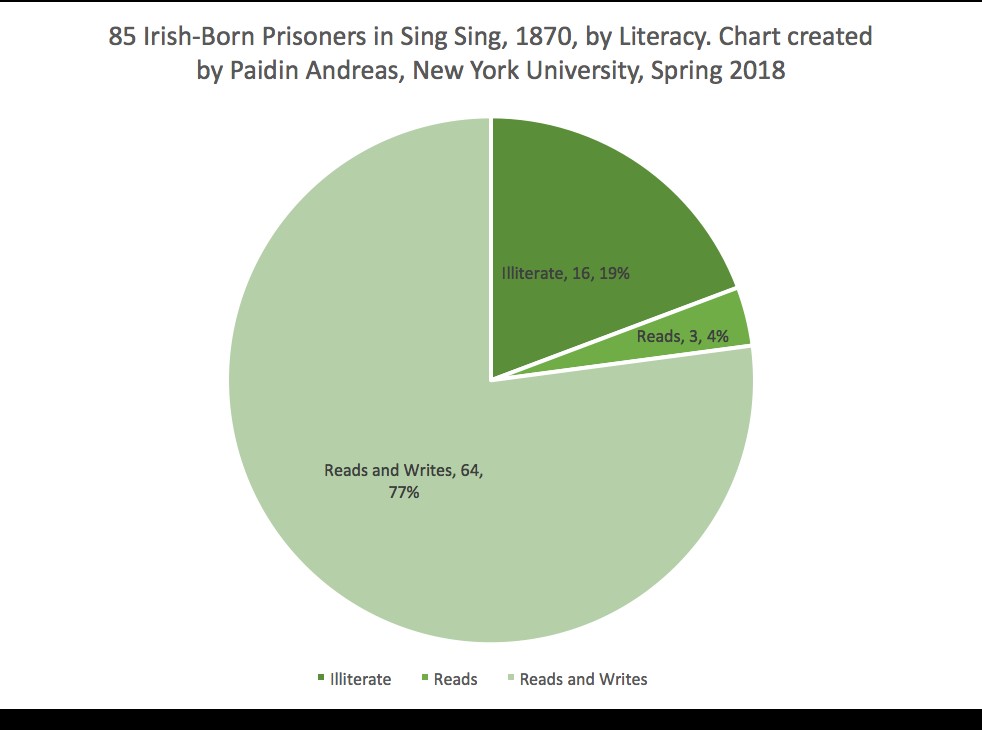 Out of the eighty-five prisoners used as a sample, sixty-four were able to read and write, three could only read, and sixteen were completely illiterate. Being illiterate put some of these men at an even greater disadvantage on top of being an immigrant to New York City and a minority.  Of the 19% of Irish-born inmates who were illiterate, nearly half of them were laborers. 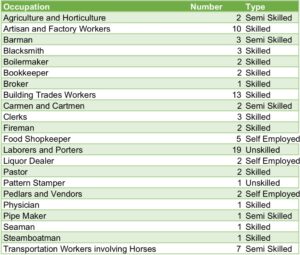 Although the most common occupation among the prisoners was clearly laborer,   72% of the laborers had been born in the decade of the 1840s, indicating the extent to which New York City’s unskilled workforce depended on strong young men.  The Twenty-third Annual Report of the Inspectors of State Prisons of the State of New York (1871) confirms that most prisoners were laborers who committed crimes against property as opposed to against a person, and that the majority were first-time convicts and between the ages of 19 and 28. 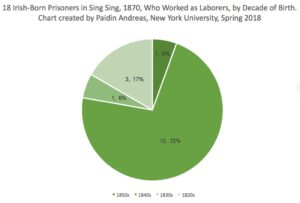 The second most common job held prior to conviction was in the building trades.  Five construction workers committed grand larceny and three committed robbery.  Overall, it can be concluded that poor people, or more appropriately, people with low-paying jobs, were committing crimes of opportunity driven by economic necessity during the 1870s.  Cain Mansfield, for example, stole $80 from Agnes Ledfelt, a woman who lived in his building on Vandewater Street; he was a 35 year old plasterer with a wife in San Francisco. He confessed to attempted grand larceny and was sent to Sing Sing for two years.