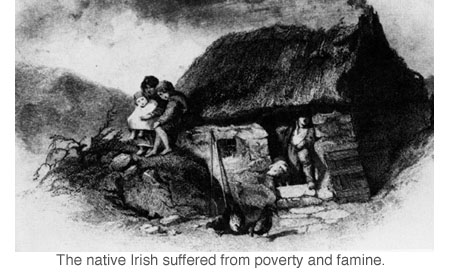 When Thomas Murray left Lissonuffy, Roscommon for New York in 1851, he left behind a world that had been decimated by famine. A third of the inhabitants of Lissonuffy had either died or emigrated since the potato blight first struck in 1845.[1] Murray was one of the many who set out in search of a better life, free of hunger, disease and loss.

Murray travelled with his wife, Mary Murray, née Casey. In Griffith’s Valuation of Ireland[2], seventeen Murrays and twenty-nine Caseys are listed as living in various townlands throughout Lissonuffy. A Thomas Murray is listed as living in the townland of Trila (Dillon). A Bridget Murray, the name of both Thomas’ mother and sister, lives in the adjacent townland, Trila (Martin), and a Hugh Murray, Thomas’ father’s name, lives in the townland of Drinagh. [3] 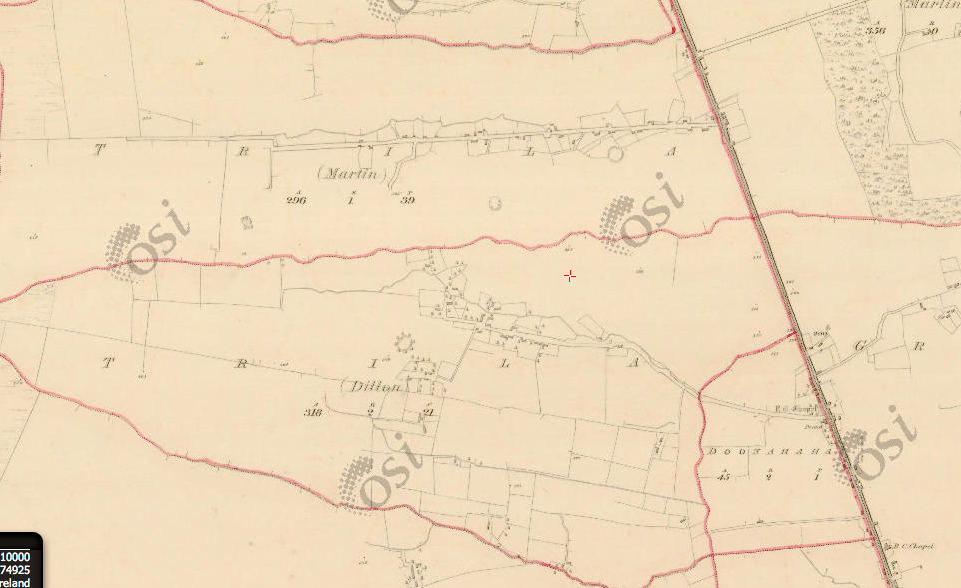 The townlands of Trila (Dillon) and Trila (Martin), Co. Roscommon, as mapped by the Ordnance Survey of Ireland in 1846.  www.osi.ie.

Record of a marriage between a Thomas Murray and a Marian Casey.  http://registers.nli.ie/parishes/0552.

Lissonuffy was part of the Roman Catholic diocese of Elphin, and a record of a marriage between a Thomas Murray and a Marian Casey was documented as having taken place in February 1846. It is highly possible that Marian was called Mary, or that her name was shortened during the emigration process, and that this is indeed their marriage record.

The Murrays made their way to Liverpool where they set sail on the St. Patrick. A passenger manifest from the ship lists a Mary Murray, aged 28, wife, and a Thomas Murray, aged 20, husband. As will be seen in later records, Thomas’ age was most likely misrepresented here, as he was almost certainly a few years older than his wife. They were two of only three Murrays listed on the 363-passenger manifest. The third, an infant named Biddy Murray was listed as “born at sea,” and could only have been the newborn daughter of Thomas and Mary. One can only imagine how difficult the circumstances of this childbirth were for Mary, far from home and in the middle of the ocean, in an environment that was no doubt abysmal. The young family must have breathed a sigh of relief when they finally landed in New York on Christmas Eve, 1851.[4]

There was no sign of Thomas and Mary Murray again until May 2, 1853, when they opened up account number 4251 at the Emigrant Industrial Savings Bank (EISB) and listed as their address 20 Cherry Street. The EISB records listed a related account, number 4252, which was held by Michael Corcoran and his wife, Catherine, also living at 20 Cherry. The EISB test books described Michael as a native of Lissonuffy, as well. His mother’s maiden name was Murray so the two men were most likely cousins.[5] Michael had followed a few months after Thomas, arriving in New York on March 27, 1952 on the Blanchard. Thirty-two years old, he disembarked with his thirty-year-old wife, Catherine, and their two children, John, seven, and Maria, an infant.[6]

Thomas and Mary’s initial deposit in the EISB account was $73. They would deposit an additional $52.41 through July 1, 1854. But beginning on July 15, 1854, they began to withdraw small amounts once or twice a month before closing the account with a final withdrawal of $86 on December 14, 1854.  Michael and Catherine Corcoran had a similar deposit and withdrawal schedule. They also opened their account on May 2, 1853, and made eight regular deposits after that for a total of $235.91. Then, like Thomas and Mary, they suddenly withdrew their entire savings and closed their account on the same date, December 14, 1854.[7] While it is true that most EISB accounts were held only for a year or two, it is most likely that both of these accounts were closed in response to the panic of 1854. The panic was local and short-lived and was in response to news of the failure of the Knickerbocker Savings Bank in December 1854. About 7 percent of the EISB’s account holders, 234 people, closed their accounts between December 11 and December 30.[8] 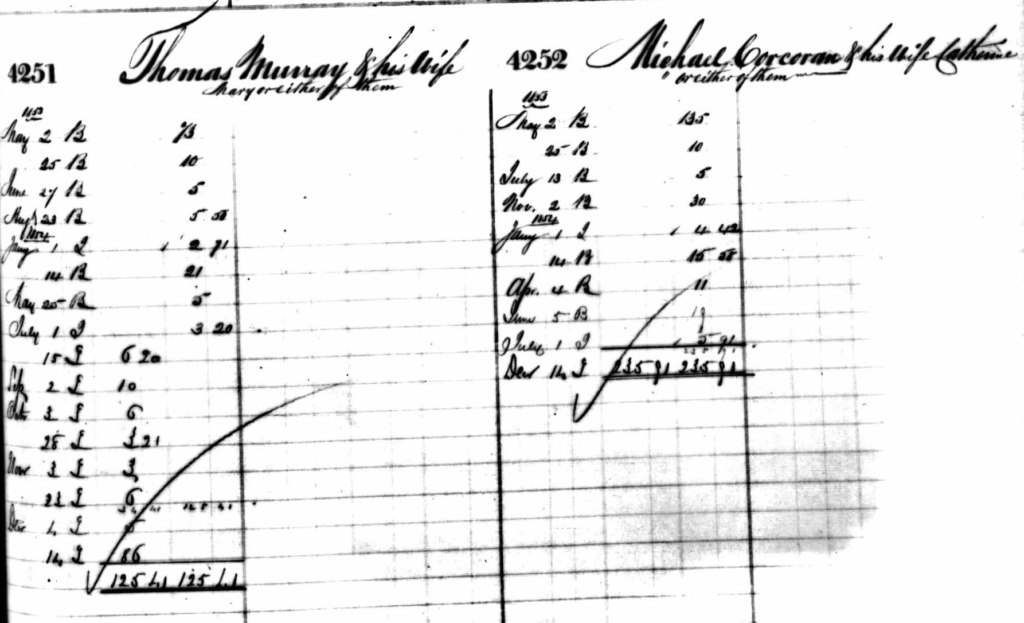 The Murrays and the Corcorans were still living at 20 Cherry Street when the census of their building was recorded on June 11, 1855, and both families had boarders (the census misspells both of their names as Murry and Corchoran). The Murrays had 15 boarders while the Corcorans had seven. Of the 10 units listed in the building, in fact, seven of them had boarders, although not nearly as many.  Of the occupations listed, the vast majority of the men were laborers.  There was also a butcher, a few clerks, a currier, a porter, two sailors and some peddlers. The vast majority of the women had no occupation listed but two were servants and one as a washer.  [9] The cousins might have lived at 20 Cherry Street when they first arrived in America, initially as boarders, or in a smaller apartment together, before saving enough money to move into a bigger apartment and take in boarders of their own. 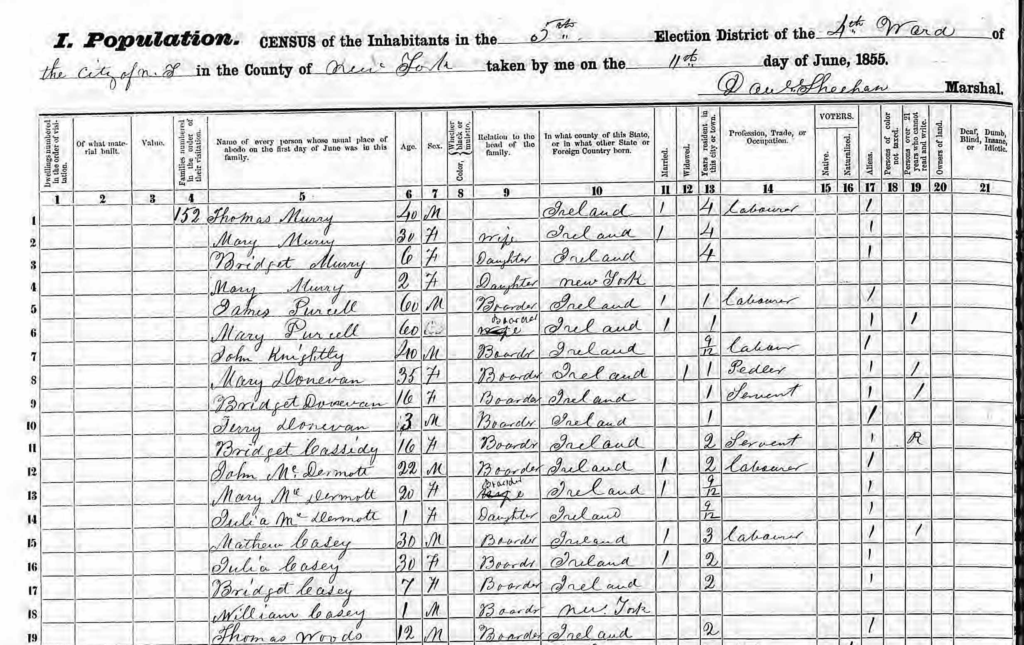 In the 1855 New York Census, Thomas Murray, laborer, was listed as being 40 years old and Mary was listed as 30. They had a daughter Bridget, six, most likely the Biddy who had been born aboard the St. Patrick four years earlier (although she is listed as being born in Ireland). There were many discrepancies on age and spelling throughout all of these old records, which was not unusual, especially when it concerned recent immigrants. The family had also added another member, two-year-old Mary, born in New York. The Corcorans were still a family of four, but their daughter Maria, who arrived as an infant three years earlier, is not listed. Michael, 35, Catherine, 33 and John, 12 are all there (and their ages are more in keeping with what they should be when compared with the passenger manifest from their ship), but there is a new child, Catherine, 2, born in New York.[10] No record of Maria was found.  She had perhaps succumbed to something she caught on board the ship, or to one of the many diseases that were prevalent in the tenements of mid-nineteenth century New York.

Thomas Murray was still living at 20 Cherry Street in 1859 as he is listed in that year’s New York City Directory. He continued to work as a laborer. Michael Corcoran, however, was not listed as living at 20 Cherry. There were three Michael Corcorans, laborer, listed in the 1859 New York City Directory, but they were spread throughout the City at 19 Albany Street, 222 East 17th Street and 128 East 38th Street.[11]  He may be one of these, or he may have moved from the area with his family. No trace of either family could be found beyond 1859.  No one matching either man’s description (or that of their wives or any of their children) appeared in either the 1865 New York State Census or the 1860 United States Federal Census.  This does not appear to be unusual, though, as studies have shown a great deal of mobility during the mid-nineteenth century, especially among the foreign-born urban population.[12]

[2] Griffith’s Valuation was the last in a series of land and tenement valuations carried out by Sir Richard Griffith for the purposes of creating a fair rent standard throughout Ireland. The Townland Valuation was begun in 1830 and what is commonly called Griffith’s Valuation, the Tenement Valuation, was begun in 1852. The Valuation for Roscommon was completed in 1858. (from James F.V. Fitzgerald’s A Practical Guide to the Valuation of Rent in Ireland. Dublin: University Press, 1881. p. 97-105).

[3] It is likely that the survey was carried out beginning in 1852, however, after Thomas had emigrated, so this is probably not him. When he opens an account at the Emigrant Industrial Savings Bank in 1853, Thomas lists both parents as dead, so while there is the possibility that they were living at the time of Griffith’s Valuation, the chances are slim. Thomas’ sister Bridget is, however, still alive and in Ireland as of 1853, though, so it could very well be her.