Today the Wiard name (pronounced and sometimes mistakenly spelt as “Weird”) is remembered by enthusiasts of rare Civil War weaponry and nineteenth century technology.  Is there a possible Irish connection? 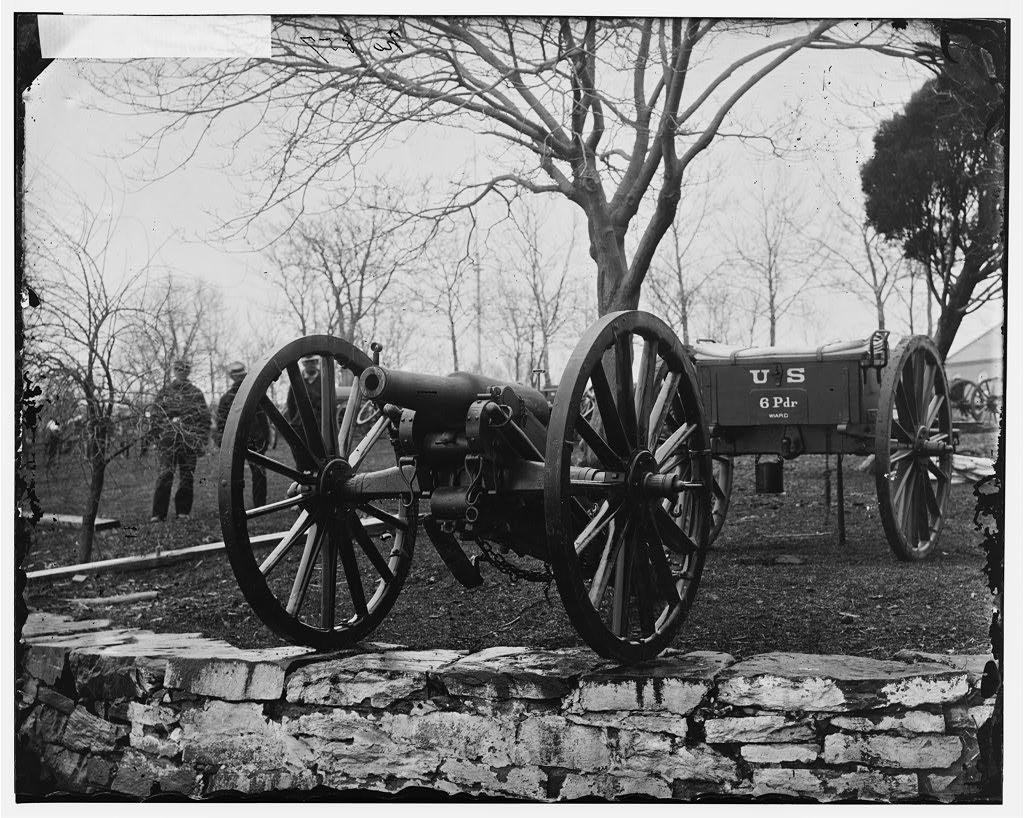 Matthew Brady’s team of photographers documented a Wiard 6-pdr at the Arsenal in Washington, D.C. in 1862. Library of Congress Digital ID https://hdl.loc.gov/loc.pnp/cwpb.04276

A Canadian by birth, the engineer and inventor Norman Wiard (1825-1896) was from a family of blacksmiths and metal workers.   As a foundry foreman, he developed a life-long proclivity for inventing new technologies.[ii] Establishing a name for himself through his “snow drift car” and steamship boilers for the U.S. and Japanese governments, it was no surprise that Wiard procured a spot for himself as a superintendent of Union Army ordnance stores where he could apply his skills.[iii]  Early trials in Ohio proved the superiority of Wiard’s guns.[iv] A six pounder “Wiard Rifled Gun” as well as a twelve pounder howitzer could be used with Wiard ammunition as well as others, according to lists in the 1863 United States Army Ordnance Department report, thereby standardizing the weaponry being used and reducing the costs of manufacturing. [v]

Both of these weapons of war were smaller in size, easier to transport on caissons, and had interchangeable parts.  They also had the ability to discharge at a higher elevation so that mortars could travel greater distances without jeopardizing their precision. While these weapons were called “guns” and “rifles,” they were actually cannons and field artillery not to be confused with Springfield or Enfield rifles .[vi]  Wiard guns were used by “eleven Union batteries,” including at the “battles of McDowell, Cross Keys, White Sulphur Springs, and Second Bull Run” in 1862.[vii] 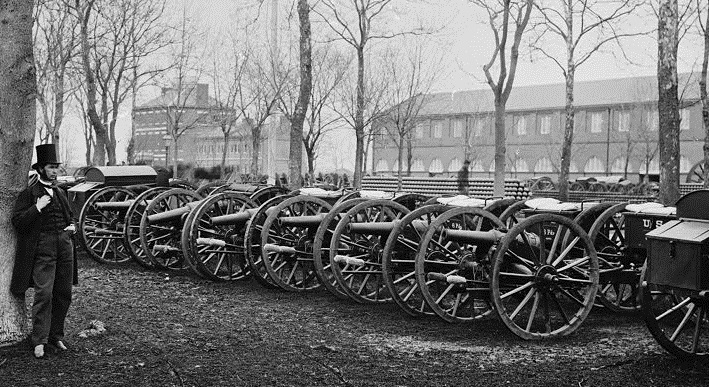 Wiard 6-pdrs lined up at the Arsenal in Washington, D.C. in 1862. The trunnions for these guns were thought to have been made in New York City at John O’Donnell’s Foundry on East 15th Street, although that has recently been challenged. Photo by Matthew Brady. Library of Congress Digital ID https://hdl.loc.gov/loc.pnp/cwpb.03649

It is possible that in 1861 and 1862 about sixty Wiard guns were manufactured at O’Donnell’s Foundry on East 15th Street in New York CIty.[i] Engraved on the “trunnion” part of the Wiard gun was “N.W./N.Y.C./O.F.” Until disputed by one source in 2015, it was long believed that the initials “O.F.” fit O’Donnell’s, suggesting that at least this piece was forged in the 18th Ward. [viii]  Wiard was an early advocate of outsourcing production to contractors in non-ordnance foundries for work on his smaller guns, something he outlined in a memorial on the firearms industry presented to Congress in January, 1863.[ix] Unlike the Dahlgren, Rodman and Parrott cannons in use by the Army, Wiard barrels were “called ‘semi-steel’, a mixture of low-carbon cast-iron and scrap steel instead of just iron.”  This gave them the ability to withstand pressure better than “any comparable field gun of the day.”[x] The guns produced for Wiard included the mark of “a shield flanked by brawny arms, rolled sleeves, and hammers” near the top of the tube, suggesting pride in metalworking.[xii]

O’Donnell’s Foundry was on East 15th St. and Avenue B, two blocks south of the more well-known Seward’s Foundry.  It typically made iron “columns, girders, sills and lintels cast to order.”[xi]

O’Donnell’s Foundry was in the middle of the block on East 15th Street between Avenues A & B. Its neighbors were Immaculate Conception Roman Catholic Church and school as well as the large tanks for the Manhattan Gas Company. Plate 42, Perris Fire Insurance Map (1857). New York Public Library Digital ID 1268324.

John O’Donnell, born in Ireland in 1820, had an iron foundry in New York City as early as 1848.[xiii]  By 1860, he was married and raising four young children in the 21st Ward.  O’Donnell had fifteen men on the payroll in a foundry valued at $36,000, a small operation when compared with the giant Novelty Ironworks where hundreds were employed.[xiv]  But the O’Donnell’s home on East 35th Street was worth $10,000 and his personal estate value was $3,000. [xv]  These were substantial assets at the time that make the O’Donnells not only an example of an emerging middle class generally overlooked in the historiography of Irish New York but also Irish who were employers.

Did O’Donnell’s workers walk off the job on Monday, 13 July 1863 as other iron workers in foundries along the East River waterfront did? There is no way to know.  But circumstances must have been tense for an Irishman whose livelihood was jeopardized when his small workforce became subject to conscription.  James L. Jackson’s Iron Works (Second Avenue between 28th and 29th Street) closed that day to allow its workers to “make a big show to resist the draft.” [xvi]   Two howitzers were used to clear Second Avenue of rioters the next day.  Were those Wiards forged by O’Donnell?  Did James Hughes and Jeremiah Tracy meet their deaths from a weapon made by a fellow countryman?[xvii] Again, there is no way to know. 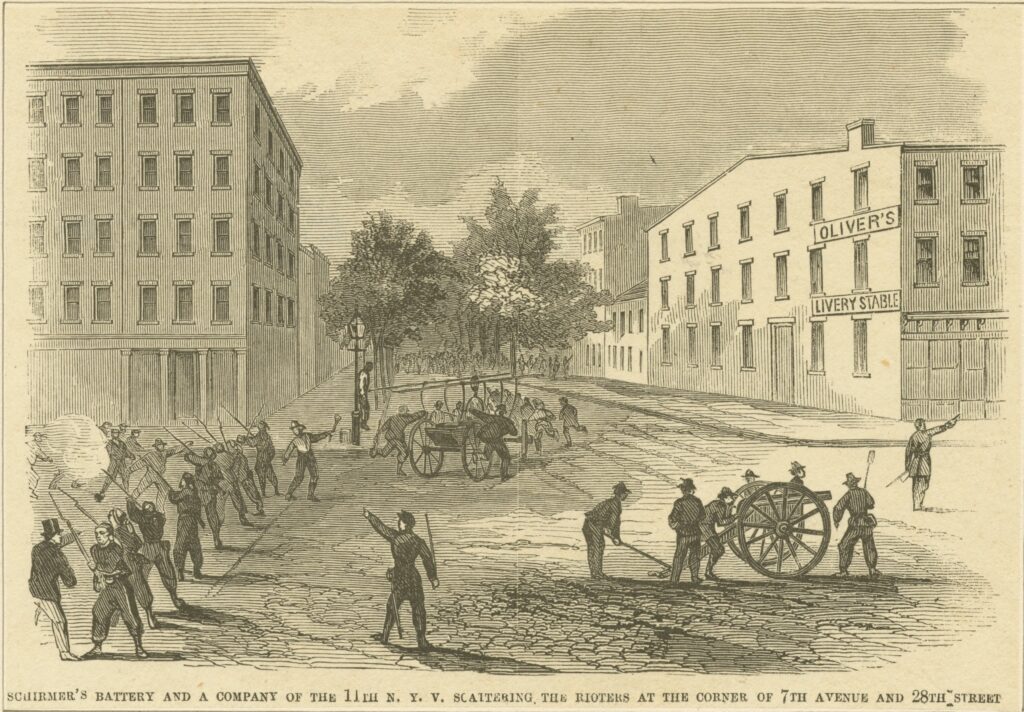 A howitzer like this one was fired into the crowd on Second Avenue by the 11th New York Volunteers under the command of Colonel O’Brien on the second day of the draft riots. “Schirmer’s Battery and A company of the 11th N.Y.V. scattering the rioters at the corner of 7th Avenue and 29th Street,” New York Public Library Emmet Collection via Wikimedia Commons.

In 1863, Norman Wiard lived at 136 East 33rd Street between Second and Third Avenues, while his place of business was at East 29th Street, corner of First Avenue, both in the 21st Ward.  In other words, he and his neighbor Colonel O’Brien lived within blocks of some of the worst confrontations in the early days of the 1863 New York City Draft Riots.[xviii]  Designing and selling weaponry for the Union Army should have made Wiard himself as well as his office targets.  Large iron foundries and weapon factories like the Union Steam Works and the adjacent wire factory on East 22nd Street and Second Avenue were main targets for the rioters. Although we don’t know what work was done in Wiard’s East 29th Street premises, he was likely less well-known to locals since his main production was at the Trenton Wiard Ordnance Co. in New Jersey.[xix]

After the war, John O’Donnell brought his son, John, Jr., into the foundry as a clerk.  In the 1870 U.S. Census, the O’Donnells – John, age 50, his wife Margaret, age 40, their seven children and a young Irish-born servant, Margaret Carl – lived at 222 East 35th Street.  The war must have been lucrative for O’Donnell because the value of his real estate holdings was reported as $100,000.  The firm continued in existence at least through 1878, perhaps longer. After the Civil War, O’Donnell’s small size and custom work may actually have been an advantage when other large-scale metal working operations moved production out of New York City as the real estate value “on the East River [became] too valuable for heavy industry.”[xx]

[vi] Although he led a very long and successful career, the U.S. Army never universally adopted Wiard guns for its artillery.

[viii] James C. Hazlett, Edwin Olmstead, & M. Hume Parks, Field Artillery Weapons of the Civil War, (University of Illinois Press, 2004), p. 19 cf. Capt. Steven W. Knott, “Revealing the Makers of the Wiard Rifle,” The Artilleryman, Vol. 36, No. 3 (Summer 2015), pp. 44-46.  A Wiard 6-pounder recently sold for $50,000; see Fine Military Americana, http://www.horsesoldier.com/products/17922.  Knott argues that Wiard used the New York firms of Tugnot & Dally for forging and Carpenter & Platt for boring.  He suggests that “O.F.” may be the initials of the inspector.  Either firm might have subcontracted work to John O’Donnell or indeed hired his foundry to do the inspections.

[xviii] Trow’s New York City Directory, 1863.  According to one source, Wiard lived at No. 23 Gramercy Park South before the war. “Templeton-Johnson House,” Daytonian in Manhattan, 2016. http://daytoninmanhattan.blogspot.com/2016/09/the-wm-templeton-johnson-house-no-23.html