In the year 1870 Sing Sing Prison was home to 85 Irish born New Yorkers. Of that population, 28 inmates were recorded upon admission to prison as bearing 30 separate tattoos comprised of 88 elements. The symbolic nature of these body modifications varies significantly.  By far the most commonly occurring tattoos were text (initials, names, phrases), but also highly popular were numbers, dots, crosses, figures and anchors. 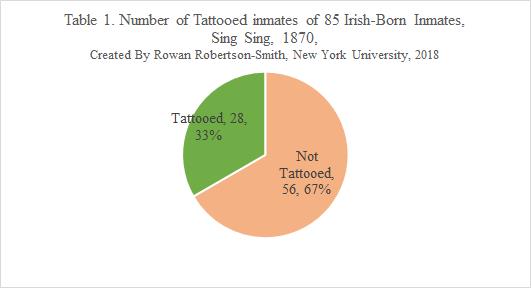 Inmates like thirty-one year old William H. Gordon who tattooed their own name on their bodies reveal an anxiety about misidentification after death. [1]  Gordon’s post-mortem fixation may also be seen in crosses, of which a nineteenth century tattoo artist said, “There is a good deal of trading with the West Indies and South America, should a sailor die with this cross on him, he would be sure of having a Christian burial.”[2]  Twenty-seven year old Charles Clark’s body art was elaborate: “a figure of the crucifixion with a Roman sentinel on right side and angel on left”[3] on his forearm. 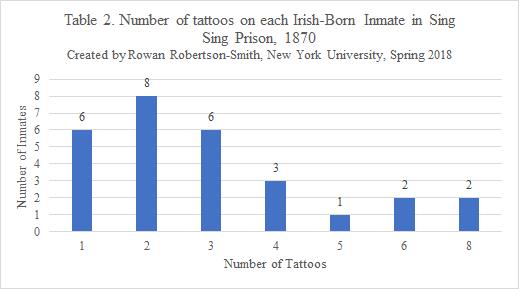 While some tattoos are more suggestive than others, desire for self-definition is clear.  Sixty-nine percent of the Irish prisoners had less than four tattoos (see Table 2). Some of these incorporated multiple design elements, such as text, numbers, dots and symbols that prove more difficult to decode than religious iconography.  Table 3 numerates the most frequently occurring images among the tattoos on Irish-born inmates in Sing Sing in 1870. 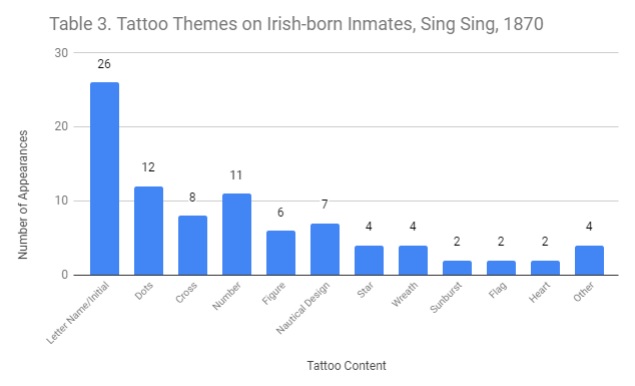 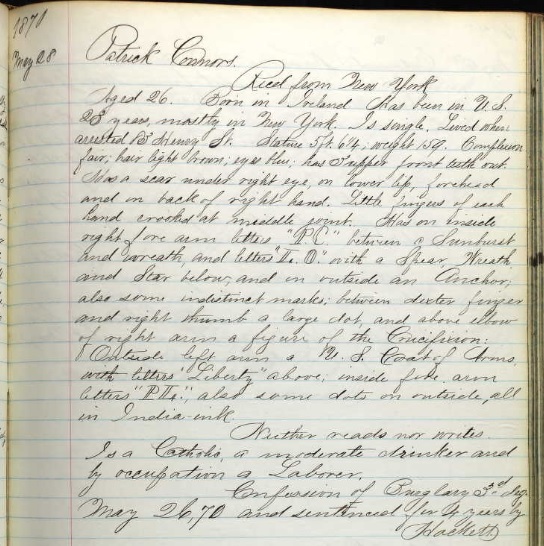 Patrick Connors had many tattoos when he was admitted to Sing Sing on May 28, 1870. He and James O’Rourke were convicted of 3rd degree burglary for stealing $15 worth of cigars from Joseph Wilson’s store on Oliver Street. New York, Sing Sing Prison Admission Registers, 1865-1939, AncestryLibrary.com; New York Tribune, 27 May 1870, p. 3.

In his research regarding tattoos of early American seafarers (1796-1818), Ira Dye notes that “things of the sea” are the second most common tattoo design, after mermaids.[4] Among the Irish-born tattooed men in Sing-Sing in 1870, 25% had “things of the sea” inked on their bodies and these provide the clearest indication of their bearer’s background. Twenty-year old Edward Smalley’s nautical tattoo — anchor on his hand  — may indicate his personal immigration history since he, like all the other Irish-born prisoners in Sing Sing, had traversed the Atlantic Ocean during their migration from Ireland to New York. In Inked: Tattoos and Body Art around the World, Margo DeMello writes, “An anchor indicated that one had sailed the Atlantic Ocean.”[5] Dye notes in his research that anchors on hands appear often enough “to raise the question of whether or not it had some superstitious significance, perhaps a belief that an anchor in this position would give the seaman some supernatural ability to hold on to ropes, spars, etc., when in danger.”[6] Though Smalley emigrated as an infant, it is possible that the anchor’s symbolism drove him to choose this particular tattoo, as it could embody both pride and resilience as well as a being a totem of security. Alternatively, according to the 1869 New York City Directory, Smalley’s father was a seaman.[7] Perhaps his tattoo was a dedication to his father, with whom he was living at the time of his arrest. 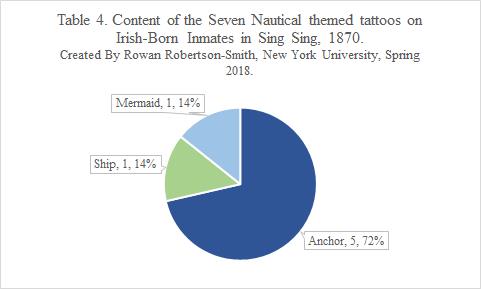 Four of the seven Irish men admitted to Sing Sing in 1870 who had nautical themed tattoos clearly had a naval or military background. Kings County (Brooklyn) resident Michael Lovett was sentenced for three years on October 26, 1870 for manslaughter in the third degree. In the Sing Sing admissions records for that year, Lovett was recorded to illiterate, Catholic, a laborer with a dark complexion. He was also recorded as having “inside of right forearm a crucifix, inside of left a ship in full sail, all in India ink.”[8] Lovett was convicted of inadvertently killing his son, Joseph, when throwing a knife at his wife, Ann. The story was highly sensationalized, appearing in multiple news sources, each with varying details.

While his Sing Sing admission record lists him as a laborer, more than one news article addressed Lovett’s seafaring background. The Brooklyn Daily Eagle printed several pieces leading up to Lovett’s trial. In an article from August 1870, The Eagle refers to Lovett as “a ’longshoreman by occupation, but has spent most of his time lately in drinking.”[9] He lived at 289 Van Brunt Street in Red Hook, a waterfront district on the East River; considering his large stature, 5’11.5” and 180 lbs, Lovett’s profession is not surprising. As noted by Burrows and Wallace, “Even with improved wages, the bulk of the working class- still unable to afford public transportation- had to live near their jobs.”[10] In another article Lovett revealed that not only was he a longshoreman, but he had “worked at grain shoveling for three years past,” and that he “was two years in the Navy.”[11]  In fact, New York Naval Enlistment records show Lovett joined in July 1864, and describe him as having no previous naval experience and no permanent marks or scars.[12] This suggests that, like many sailors, Lovett picked up his tattoos during or shortly after his two years in service. Like Early Christians who “purchased tattoos in Jerusalem, apparently in order to prove that they had been there,”[13] Lovett’s ship in full sail likely symbolizes his time at sea.

According to Dye, “Seamen gained from this shared experience the strong bonding that characterized the society of seafarers. This bonding among seafarers carried over into relationships with the employers. Seamen, individually and collectively, struggled continuously with the merchant/ship owner not only over the amount of wages and the terms of employment but also over whether the wages promised and earned would even be paid. But the seaman was willing and able to rebel against bad and unfair treatment, by mutiny, by leaving the vessel or by turning to piracy.”[15]

Seafaring tattoos projected the same notions of dedication and kinship that the Irish saw amongst themselves. Dye further claims “The anchors, mermaids, whales and ships that these sailors marked on their bodies identified them to other seafarers and stated to the unadventurous that here were men who had braved the toughest frontier that the era had to offer.”[16] Likewise, resilience and survival were felt by nineteenth century Irish immigrants whose clannish behavior highly defined their New York reputation; they felt “strongly about their Irish identity” and “asserted their equal rights despite poverty and nationality.”[17] The impulse to brand oneself with a badge connoting fortitude is reasonable considering the prejudice suffered by the New York Irish of this time. In her essay “Speaking Scars” Jane Caplan references Clinton Sanders in suggesting “that, by contrast with reversible forms of adornment like clothing or hair styles, irreversible body alterations are typically connected to permanent statuses … lifelong social connections.”[14] The popularity of nautical tattoos may then be seen as an appropriation of the well-known strength of seafarers.