On April 30, 1789 George Washington left his residence at 1 Cherry Street and proceeded to the newly-renamed Federal Hall for his inauguration as the first President of the United States. The Cherry Street residence was a mansion, owned by William Franklin, whose daughter Mary was to marry DeWitt Clinton, later to become the sixth Governor of the State of New York. John Hancock owned a home at 5 Cherry and 23 Cherry would be the first home in the city to install gas illumination. “In Cherry Hill, the high ground in the northeastern part of the Ward, the old families and the great merchants had homes and the streets were lined with fragrant cherry trees and splendid mansions.” [1] 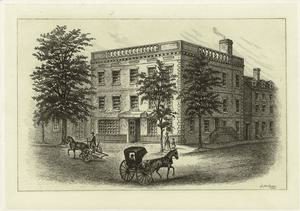 However, as the nineteenth century progressed, New York City prospered and its wealthy elite moved north, up the island of Manhattan. The streets in the Cherry Hill neighborhood changed as well. “Cherry Street … went from wealthy suburb to waterfront slum in less than thirty years.” [2] Shipping, one of the chief drivers of the New York economy, expanded rapidly along the waterfront, providing jobs for the flood of emigrants arriving in the city. The city’s population grew from 60,000 in 1800 to 312,000 in 1840 and 813,000 in 1860. More significantly for Cherry Street and environs, the population density increased even more drastically. In the period from 1820 to 1910 the population density of the Lower East Side neighborhood increased from roughly 160 people per hectare to 1,520 people per hectare. (A hectare is 10,00 square meters or almost 2.5 acres.) In the pre-mass transit era it was a virtual necessity for workers to be able to walk to their jobs, and the building height limitation for most of the nineteenth century was four to five stories. The housing solution was to cram as many people into relatively small living quarters as possible. During the period 1800 to 1910 in Manhattan, the “floor area per person declined from 800 square feet per person to 270, with inhabitants of the Lower East Side averaging just 100 square feet per person.” [3] (See animation of changing density across Manhattan / Video by Shlomo Angel and Patrick Lamson-Hall at http://urbanomnibus.net/2014/10/the-rise-and-fall-of-manhattans-density/) 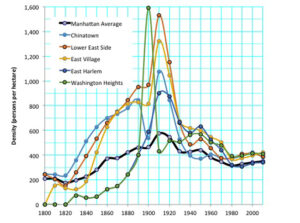 Chart of Manhattan Population Density from 1800 to 2010.
Source: http://urbanomnibus.net/2014/10/the-rise-and-fall-of-manhattans-density/

“Tenant houses” or “tenements” began to be developed as early as the 1820’s and proliferated in the 1830’s and 1840’s as New York encountered its first housing crisis. “For businessmen of the time, including John Jacob Astor, a major investor in the East Side housing boom, the tenement was a real estate windfall.” [4] James Allaire, the owner of the Allaire Iron Works at 466 Cherry Street, built a five-story brick tenement on Water Street, presumably for his employees employees. [5] Many landlords, however, modified the existing housing stock to maximize their profitability.

By the 1860’s overcrowding and primitive infrastructure, such as inadequate sewer connections, created an unhealthy environment and an attempt was made to quantify and analyze the extent of the problem. The Citizens’ Association of New York, made up of prominent New Yorkers, commissioned a Report on the Sanitary Condition of the City. The research for the Report was carried out by sixteen physicians, who drafted individual reports on the city’s Sanitary Districts. Some of the problems reported were overcrowding, poor ventilation and light, lack of running water, lack of proper sewerage, consumption of spoiled and adulterated foods and questionable economic incentives for proprietors. Dr. Oscar Smith, who wrote the report on the Seventh Ward, described Cherry Street as “exceedingly filthy, not only in the streets and gutters, but on the sidewalks.” [6] The Report was addressed to an association of private citizens and while some new laws were recommended, the expectation was that much of the work of improving the situation was to be carried out by non-governmental actors. The first recommendation to the Association makes this evident, “First – That capitalists, architects and builders should unite in devising and executing the construction of improving dwellings for the industrial classes of the city.” [7] 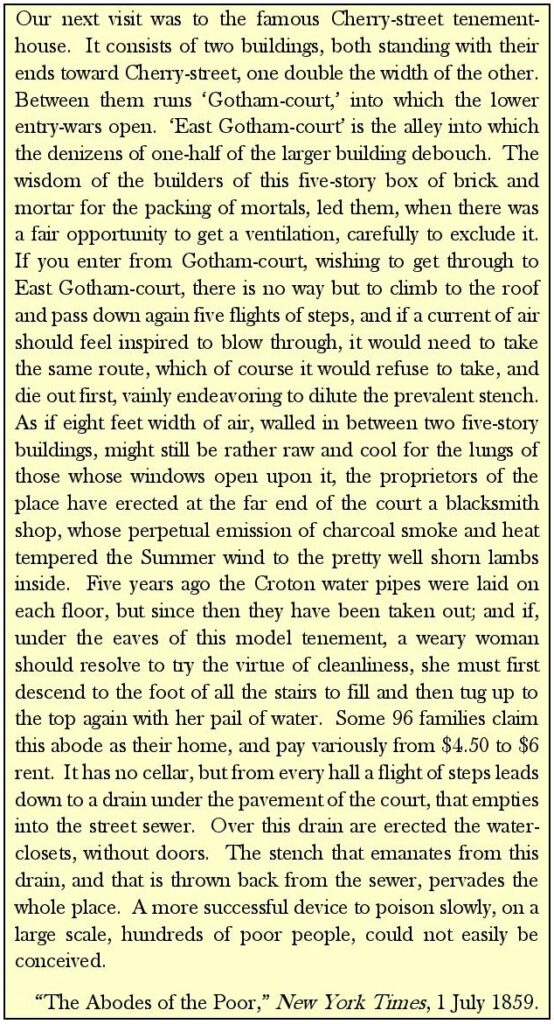 One of the chief offending properties, Gotham Court, was condemned in the 1870’s but not finally torn down until the 1890’s. In 1850 Silas Wood, a “benevolent Quaker,’ had built it as a ‘model’ tenement, and he “charged only enough rent to bring in a modest return on his investment and hired as his agent a compassionate neighborhood resident he could count on to treat the tenants fairly.” [8] 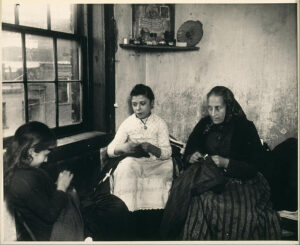 Sewing pants in Gotham Court, photographed by Jacob Riis for How the Other Half Lives. The Museum of Fine Arts, Houston.

Originally an imposing structure, it became severely overcrowded, fell into decrepitude and became a haunt for criminals. In response to the tenement housing situation, the state established a Tenement House Committee with settlement house workers acting as investigators, taking testimony from housing experts, health inspectors, landlords and tenants. “They discovered that over 70% of the city’s population of roughly 1,800,000 now lived in multifamily domiciles, four-fifths of which were tenement houses, vast numbers of which were experiencing the familiar litany of housing ills, including high rates of disease, terrific overcrowding, and a lack of accessible parks and playgrounds.” [9]

The work of the Committee led to the passage of the Tenement House Law of 1895 that emphasized and facilitated condemnation and demolition proceedings but did little to provide for new construction. The Chairman of the Committee, Richard Gilder, argued that municipal housing initiatives would be an “unjustifiable interference with private enterprise.” [10] New construction would be left to a combination of philanthropy and private enterprise. Jacob Riis wrote that the tenement housing problem had three elements to its solution: law, remodeling existing buildings and new construction. “Private enterprise – conscience, to put it in the categories of duties, where it belongs, must do the lion’s share under these last two heads.” [11]

An example of a private/philanthropic venture is the Tenement House Building Company, which limited investor profits to 4% and constructed six new tenements at 338-342 Cherry Street, between Clinton and Montgomery Streets. The buildings opened in 1887 and the 108 two – or three-room apartments were quickly rented to many Russian Jews “attracted by the moderate rents, as well as the separate toilets for each two apartments, nine free baths, kindergarten room, and superintendent.”[12] Such philanthropic building projects could not significantly counter the essential problem of high land cost and the inability or unwillingness of the small capitalist, who comprised the building industry, to accept 4 or 5 percent returns when they could get 15 percent. 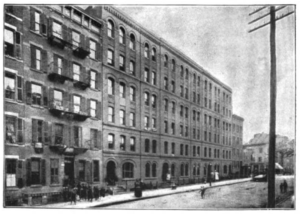 Tenement House Building Company model tenement housing built in 1887 at 338-344 Cherry Street. (Source: The Housing of the Working People, report prepared by the Commissioner of Labor for the U. S. government, 1895.)

It was not until the twentieth century that the dismantling and reshaping of Cherry Street would be accomplished. Rejecting the economically flawed nineteenth century model of philanthropic redevelopment, Mayor Fiorello LaGuardia formed the New York City Housing Authority in 1934 and, employing federal funds in the midst of the Great Depression, embarked on an ambitious plan to clear neighborhoods of older housing stock and build new affordable public housing. The effort was, most importantly, a jobs program. “The housing program, like so many others, developed backwards out of a search for places to spend money.” [12] 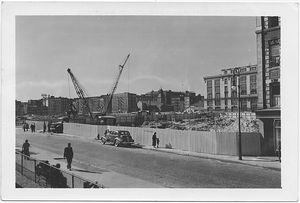 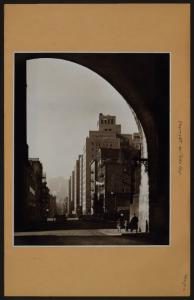 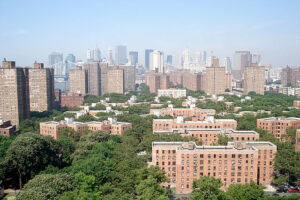 [6] Report of the Council of Hygiene, Ninth Sanitary District, p. 98.

[7] Report on the Council of Hygiene, p. lxxxviii.