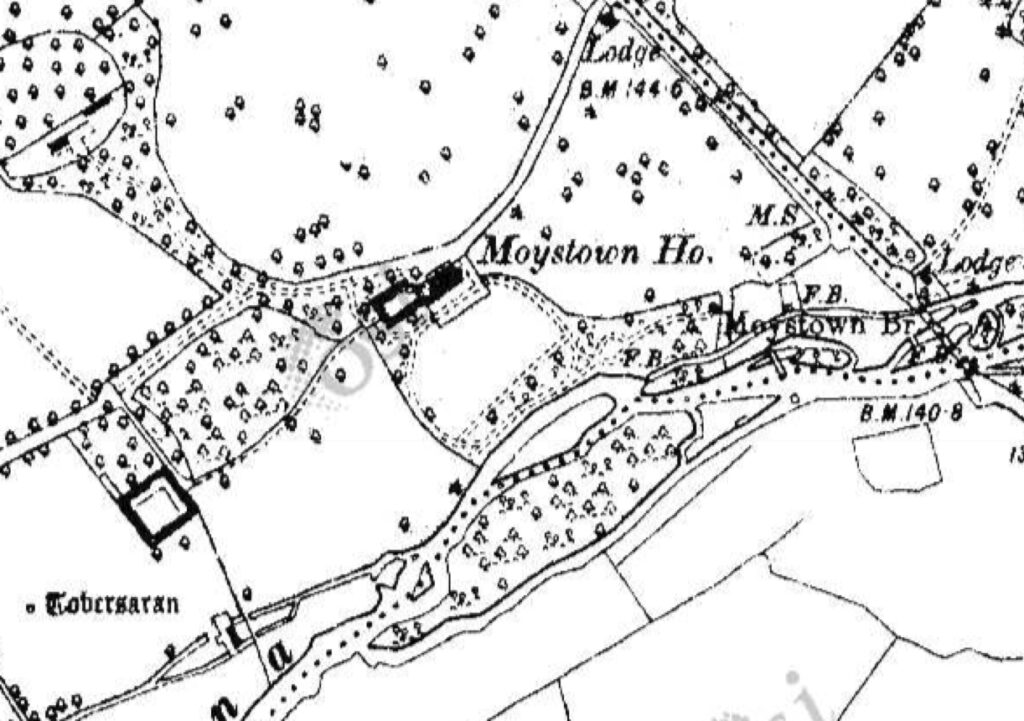 Moystown Demesne is a small townland, less than one square mile in area, located on the western edge of King’s County (now Co. Offaly), not far from the villages of Cloghan, Ferbane, and Banagher.  It is situated in the parish of Tisaran, in the barony of Garrycastle. Bounded to the east by the River Brosna and to the southwest by the River Shannon, it sits on the border of Co. Galway.

Heavily wooded in the 19th century, Samuel Lewis notes in his Topographical Dictionary of Ireland that there are “very extensive plantations and ornamental timber around […] Moystown […] The timber is large and excellent: the ash from this part bears the highest price in Dublin; oak, birch, and lime also thrive well.”[1] Domestic timber was critical to Dublin’s flourishing furniture-making industry, with luxury firms such as Mack Williams & Gibton, George Gillington, George Murray, and Joshua Kearney thriving on the influx of indigenous wood from the Irish countryside.[2] Lewis further observed that the newer plantations were interspersed with “ancient stands of timber” in the region[3], and indeed the Ordnance Survey maps throughout the 19th century show a large oak wood dominating the landscape.[4] James Fraser remarked in his Hand Book for Travellers in Ireland that although the area around Moystown had several “deep brown bogs” and lacked “varied” park scenery, that there was “in the style of the old house, in the arrangement of the plantations, and in the beautiful old evergreen oaks, and other ornamental trees which adorn the lawn, a character which carries us back to the gentlemen’s seats of the olden time.”[5]

Moystown House, owned by the L’Estrange family who also owned nearby Huntston House, was the principal country house in the area.[6] The demesne contained a police barrack, the ruins of several castles, and the ruins of the Catholic church of Tisaran. In his overview of the parish, Samuel Lewis confirms the L’Estrange family’s connection to the area — they had been in Moystown since 1633[7] — noting that Mrs. L’Estrange was the patroness of a school for girls in Tisaran.[8] He mentions that there are two additional “private schools” where he estimated an additional 130 children were being educated.[9] Given the small size of the Moystown Demense, it is unsurprising that the school buildings were located in the nearby townland of Huntston.

Samuel Lewis also notes that the parish contained a limestone quarry, “for both building and agricultural purposes,”[10] while Griffith’s Valuation indicates that, although Moystown Demense and its deer park belonged to the 5th Viscount Ashbrook, much of the arable land around Moystown was leased to small farmers by the Earl of Rosse.[11] However, given the boggy terrain and the extensive trees in Moystown proper, it appears that most of its farmland was located in neighboring Lisclooney.[12] Garrycastle was, generally, boggy and uncultivated, and the area was not very prosperous. The Royal Commission on the Condition of the Poorer Classes of Ireland found in 1836 that most of the thatched cottages of the peasants “are miserably poor and wretched, in few instances weather proof; yet fondly clung to by the natives, who are attached to them by custom, and perhaps also from the warmth occasioned by their smoke and lowness.”[13]

In the years following the close of the Napoleonic Wars, the linen and woolen industries in the region were on the brink of collapse, causing many mills to close and cottage industries to evaporate.[14] This economic decline, coupled with high land prices and failed potato crops during the 1810s, 20s, and 30s created an environment of destitution, “violence and lawlessness” in the area on the eve of the Famine.[15] King’s County was rife with outbreaks of agrarian aggression from the end of the Napoleonic Wars well into the 1860s, with strong concentrations of secret societies such as the Caravats, Shanavests, and the Rockites.[16]

The Famine hit King’s County early and hard, with landlords slow to react or realize the gravity of the crisis.[17] However, by 1848, it seems that the crops in Moystown were rebounding, perhaps in consequence of the fact that King’s County was not solely reliant on the “lumper,” the potato variety most susceptible to the blight, but also grew the more resilient “Bangor” and “Oxford noble” potatoes.[18] In late June of that year, Mr. Dolan, the gardener to the L’Estrange family, reported that he was harvesting new potatoes “perfectly free from disease.”[19]

At the time of the Famine, Henry Piesley-L’Estrange does not seem to have been overly concerned with directing his energies toward the relief of tenants, for while no records indicate heavy involvement in remediation efforts, sources note that Moystown continued to host extravagant balls and suppers during the Famine years.[20] It appears that the L’Estrange family quit the district shortly after, for in December of 1850, a leasing notice for Moystown House appeared in the Leinster Express.[21] The gentry were not the only group to depart from Moystown in the wake of the Famine. Between 12.5-14.9% of the population of King’s County emigrated during the Famine (1845-51), including members of the Larkin family, who settled in Manhattan’s Twelfth Ward.[22] 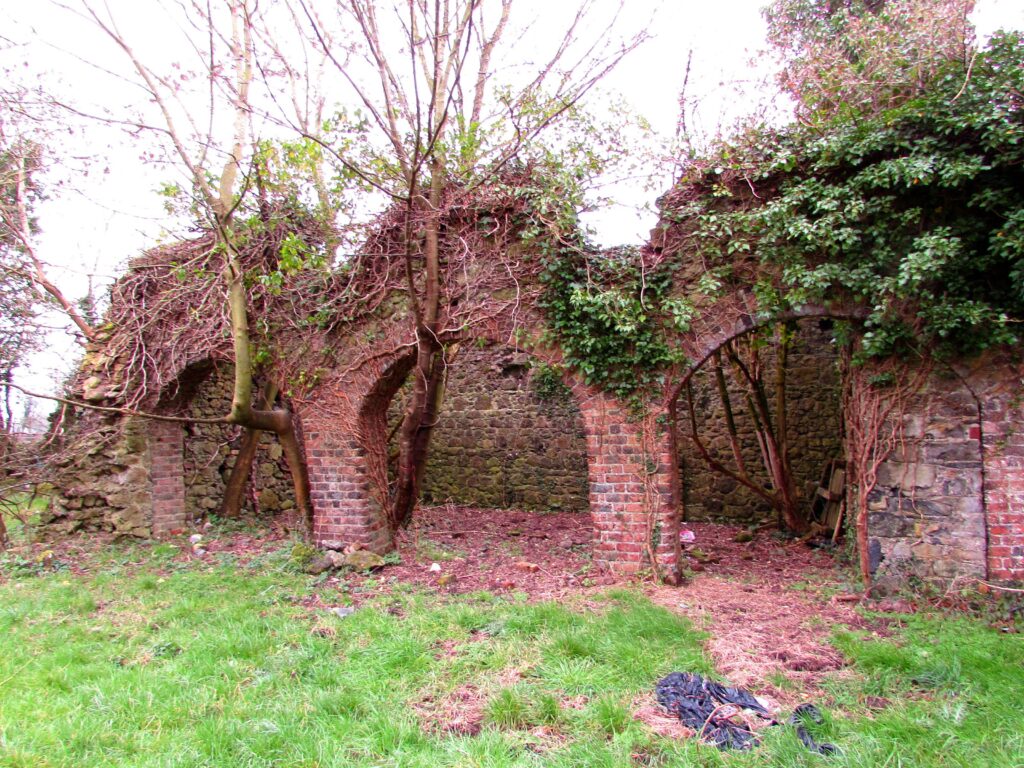 Moystown House was destroyed in the 1920 in a fire believed to be arson. Only ruins of the outbuildings remain today. Photograph by Steven Downes, reproduced with permission of the photographer.

[5] James Fraser, A Hand Book for Travellers in Ireland: Descriptive of Its Scenery, Towns, Seats, Antiquities, Etc. with Various Statistical Tables. Also Its Mineral Structure, a Brief View of Its Botany, and Information for Anglers (London: William Curry, Jun. and Company, Longman and Company, 1844), p. 405

[6] The Parliamentary gazetteer of Ireland, adapted to the new poor-law, franchise, municipal and ecclesiastical arrangements, and compiled with a special reference to the lines of railroad and canal communication, as existing in 1814-45, s.v. “Moystown” (Dublin [etc.] A. Fullarton and co., 1846), p. 821

[7] Their landlord was Lord Ashbrook, according to Griffith’s Valuation. John Burke, A Genealogical and Heraldic History of the Commoners of Great Britain and Ireland, Enjoying Territorial Possessions Or High Official Rank: But Uninvested with Heritable Honours, Volume 4, s.v. “”L’Estrange, of Moytown” (London: Henry Colburn, 1838), pp. 641-642

[21] Leinster Express 1831-current, Saturday, January 11, 1851; Section: Front page, Page: 1 The family might have emigrated at this time and settled in Michigan.