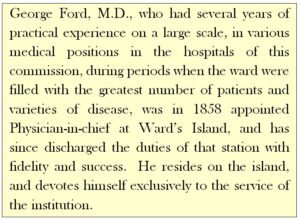 Born in Ballinamore, Co. Leitrim in 1812, George Ford trained at the Royal College of Surgeons in London, graduating in 1837.

He arrived in New York City in the summer of 1849 on the Centurion from Liverpool at a time when an ever-increasing number of immigrants were in need of medical attention. Dr. Ford spent most of his career on Ward’s Island, beginning as a resident physician, then briefly a visiting physician (1855), and then, from 1858 until his death in 1881, as the Physician in Chief of the Emigrant Refuge and Hospital.

“He was regarded by the Commissioners [of Emigration] as a physician of marked ability and an excellent executive officer.  In the early years of his hospital practice….he was most successful in his treatment of immigrants suffering from typhus and ship fever.”[1]

Economies necessitated by the Panic of 1873 resulted in the Commissioners reducing Dr. Ford’s salary from $3,500 to $2,500 per year. The value of these salaries in 2015 would be approximately $70,000 and $50,000 respectively, figures that convey the severity of the depression triggered by the panic. [2]

He lived on Ward’s Island with his wife, the former Margaret Rorke, with whom he raised nine children.  Their third son, Felix Eugene Ford, was named for Mrs. Ford’s uncle, Felix Ingoldsby, a hardware importer, philanthropist, and Trustee of the Emigrant Industrial Savings Bank who was also from Ballinamore, Co. Leitrim.[3]  Another son, Thomas, followed in his father’s footsteps and became a doctor.[4] 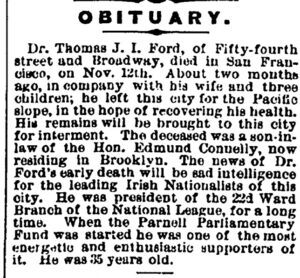 George Ford was a member of the Friendly Sons of St. Patrick as well as the County Medical Society, the Pathological Society, and the Society for the Relief of Widows and Orphans of Medical Men.[5]