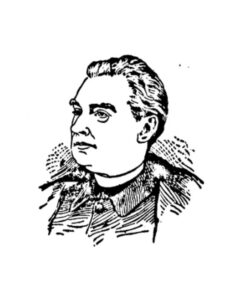 Msgr. Arthur J. Donnelly was said to be “a man of kindly nature, excellent judgement, and great skill in the management of practical affairs. He was essentially a practical man, and his advice upon any subject was to be highly esteemed.” Sun and New York Press, 26 March 1890, p. 8

The Reverend Arthur J. Donnelly began his life in Athy, Co. Kildare, Ireland on January 19th, 1820.[1] When he was seven years old, Donnelly emigrated with his parents to New York, where they settled in St. Mary’s, a new parish established on Sheriff Street in 1827. Young Donnelly began his education in the church basement school there. He would have witnessed both the burning of St. Mary’s by nativists in 1831 and survived the devastating cholera epidemic that swept the neighborhood in 1832.[2] At age fourteen, he was apprenticed in the dry-goods business in Paterson, New Jersey but lost that position during the panic of 1835.  According to one account, Donnelly “was sent to notify Lord & Taylor,” one of the Paterson creditors, and “asked for work.  He was employed and it was the boast of the firm that if they got little money out of the Paterson bankrupt, they had little to complain of, for they had secured a capable and energetic employee.”[3]  In 1844 he started his own business with his cousin David Campion but, after growing close to some of the students in St. Joseph’s Seminary at Fordham, Donnelly decided to become a priest in 1846.[4]

On October 6th, 1852 at age thirty-two A.J. Donnelly became Fr. Donnelly when he was ordained at St. Patrick’s Cathedral by his mentor Archbishop John Hughes.[5] From there, Donnelly’s career in the Catholic Church progressed very quickly. Despite formally leaving the world of commerce, Donnelly brought his astute business sensibilities to the expansion of the Archdiocese of New York through his vigor for fundraising, his charitable nature, and his managerial savvy. On October 28th, 1852, a remarkably short three weeks after his ordination, Donnelly was put in charge of the great task of going to Manhattanville to “organize and erect a parish.”[6]  Despite an ever-growing Catholic population in the Twelfth Ward, prior to 1852 the only Catholic Church north of 50th Street was St. Paul’s in Harlem.[7] 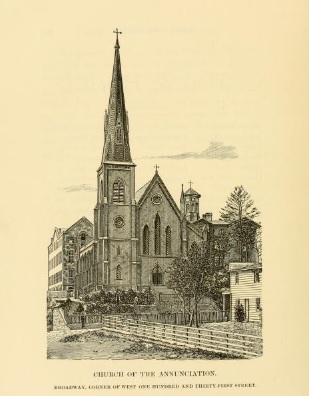 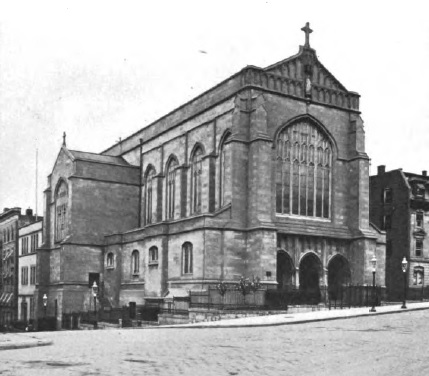 The Church of the Annunciation, 88 Convent Avenue, corner of Broadway and West 131st Street, in Manhattan circa 1914. This new church, built in 1907 in the style of 15th century Gothic, replaced that built under the supervision of its first pastor, Fr. Arthur J. Donnelly, in 1853-1854. Remigius Lafort, The Catholic Church in the United States (NY: The Catholic Editing Company, 1914), p. 313

Fr. Donnelly said the first Masses in Manhattanville in an old, colonial-style house that was donated to the Church.  Soon he had formal building under way by working with the Christian Brothers who already intended to establish a college in the parish as an offshoot of their Academy of the Holy Infancy. They worked in conjunction with Donnelly to purchase two square blocks between Broadway and 11th Avenue and West 131st Street and West 133rd Street.[8] On November 27th, 1853 Archbishop Gaetano Bedini, the first Papal envoy to the United States, blessed the cornerstone for what would become the Church of Annunciation.[9] The pressed brick Gothic Church with brownstone trimming, built at a cost of $25,000, was formally dedicated during the winter of 1854 by Reverend William Starrs, the Vicar-General of the Archdiocese of New York.[10] The rest of the purchased property was utilized for Manhattan College whose students frequently used the Church for prayer, retreats, baccalaureate Masses, and graduation.[11]

There were two Masses daily at the Church of the Annunciation in the 1850s. New York Freeman’s Journal, August 28, 1853.

By 1855 Irish-born men, women and children made up 33% of 12th Ward residents, representing 5,831 out of the 17,656 inhabitants living north of 86th street.[12] The Church of the Annunciation largely catered to Irish employees of the new Hudson River Railroad whose lives prior to the construction of the Church was “all work and no pray.”[13] Fr. Donnelly took care of and looked after his parishioners; for example, when Ann Morgan was “left” in Harlem by her husband, James Higgins from Co. Louth, the Boston Pilot reported that she was in the “care of Rev. A. J. Donnelly, Manhattanville, N.Y.”[14] 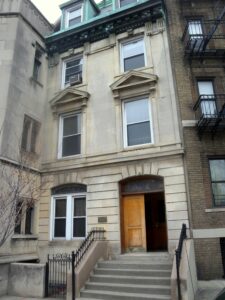 A new rectory for the Church of the Annunciation, 118 West 131st Street, was built in 1903. Photo by Jim Henderson, Creative Commons.

Fr. Donnelly also managed the Emigrant Industrial Savings Bank (EISB) account of twenty-six-year-old Ann Caffery from Co. Meath, his rectory housekeeper. She had saved the modern equivalent of $530 by the time she had closed her account in 1858.[15] When the state census was taken in the summer of 1855, the rectory adjoining the Church of Annunciation was not only home to Donnelly and Caffery but also to sixty-year old Archbishop John Hughes and thirty-five-year old farmer John O’Shea, all of them from Ireland.[16] 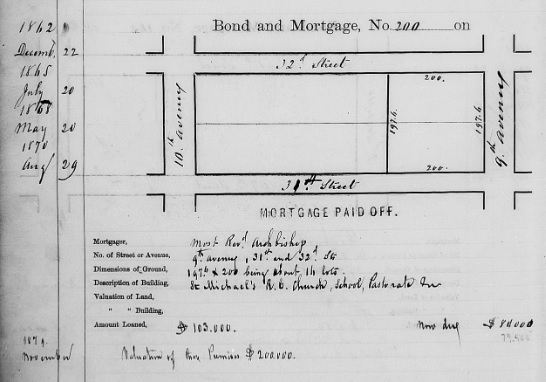 Fr. Donnelly was the founding pastor of St. Michael’s Roman Catholic Church in 1860. Construction of the parish’s first church was enabled by a mortgage from the Emigrant Industrial Savings Bank.  Emigrant City, Bond & Mortgage No, 200 (1862), New York Public Library.

Fr. Arthur Donnelly had intended to start another building project in the area between St. Columba on West 25th Street and the Church of the Holy Cross on West 42nd Street which was “rapidly filling up with Irish immigrants” but the depression of 1857 temporarily halted his plans for a new parish.[21] By 1860, however, he was the founding pastor of St. Michael’s on West 31st Street, where he lived in its rectory at 383 Ninth Avenue for the next thirty years.[22] While there, Donnelly established a convent for the Presentation nuns, a Catholic order of religious women, and  St. Michael’s Home for Destitute Children on the south shore of Staten Island where the New York parish could support up to fifty children. St. Michael’s Home was on an eighty-acre farm in Green Ridge, where Donnelly insisted that the children sleep on the first floor in case of fire and placed their school room on the upper floors.[23]

While at St. Michael’s, Fr. Donnelly opened four more EISB accounts, one for the parish and another for the St. Michael’s Total Abstinence and Benevolent Society, of which he was Treasurer, plus two for his younger sister, Catherine Donnelly.[16]

Donnelly continued to play an important role in the New York Catholic Church.  He was procurator, or business manager, for St. Joseph’s Seminary at Fordham to which he personally donated over $5,000 during his lifetime.[24] Donnelly’s enthusiasm for fundraising and construction remained with him his whole life; in 1858 he donated $1000 towards the construction of the new St. Patrick’s Cathedral on Fifth Avenue and in 1878 was the co-chair for the printing of tickets and the press coverage for the 1878 St. Patrick’s Cathedral Fair.[25] The fair was an integral part of fundraising for its enormous construction costs. Despite the economic depression of the late 1870s, each day the Fair brought in an average of $6,000, bringing the total net value of the Fair to $172,625 by the end of its’ 42-day run.[26]

Early in 1887, Fr. Donnelly quickly became embroiled in the so-called “McGlynn Affair.” Fr. Edward McGlynn, a first-generation Irish American, was a priest who supported the radical progressive reformer and New York Mayoral Candidate, Henry George, who was opposed by the New York Archdiocese and Tammany Democrats. [28] McGlynn was suspended from his clerical duties at St. Stephen’s Church on East 28th Street for continually going against the orders of Archbishop McCloskey, and later Archbishop Corrigan, regarding political campaigning.  Ultimately, he was excommunicated by the Vatican.[29] Fr. Donnelly was tasked with reassigning the parish assistant, Fr. Curran, on January 15th, 1887 and with serving as Father McGlynn’s “indefinite replacement.”[30] This decision was met with much protest from St. Stephen’s parishioners.

The New York Times reported on “M’Glynn’s Angry Flock” during Father Donnelly’s first Mass at St. Stephen’s.[31] There was a great sense of “commotion” as parishioners recognized their “former Pastor” dressed in “a dark overcoat” and a “black derby hat […] sitting in a pew with themselves.”[32] The Church engineer, Mr. Johnson, had refused to heat the Church; the choral director, Miss Agatha Munier, had resigned, and the collection baskets remained empty.[33] The sudden appointment of Fr. Donnelly was believed to be a “strategy intended to take the Rev. Dr. Edward McGlynn by surprise and secure control of the parish without creating unpleasantness.”[34] Such a goal was never realized; on Monday January 17th, seven thousand men and women protested outside St. Stephen’s over McGlynn’s removal. A formal boycott committee went inside the Church and declared:

[…] We the parishioners of St. Stephen’s church, abstain from any further support, pecuniary or otherwise, for the church of St. Stephen’s while Rev. Arthur J. Donnelly remains in the church; and, […] we pledge ourselves to refuse to contribute to the maintenance of the church while we are deprived of the administration of the Rev. Dr. Edward McGlynn. [35]

Ultimately, McGlynn’s excommunication caused fear among his supporters. St. Stephen’s pews and the collection baskets were once again full.[36] Donnelly’s time at St. Stephen’s was not in vain, however, because it earned him a promotion. Due to “superior loyalty and self-sacrifice” during the McGlynn Affair, he was appointed to the role of Vicar-General in May 1887, despite the “anomaly” of having two Vicar-Generals in one Archdiocese.[37] An exception was made for him due to the “honorable” work he conducted despite the scandal, which the New York Times called “Father Donnelly’s Reward.”[38] Not much was to be expected of him for the remaining two years of his life, as he was reportedly “old and ailing” in 1887.[39]

Twelve months before his death, Pope Leo XIII gave Donnelly the clerical rank of Monsignor.[40]  Bright’s Disease caused his sudden death on March 25th, 1890 in Manhattan.[41]  His memorial services were held at St. Michael’s, the big West Side parish to which he had dedicated so much of his life.[42] Arthur J. Donnelly is buried in Calvary Cemetery in Queens, New York.[43]

[2] “A New Vicar-General.,” The New York Times, May 6, 1887; Thomas J Shelley, The Bicentennial History of the Archdiocese of New York, 1808-2008 (Strasbourg: Editions Du Signe, 2007), 100; Remigius Lafort, S.T.D., Censor, The Catholic Church in the United States of America: Undertaken to Celebrate the Golden Jubilee of His Holiness, Pope Pius X. Volume 3: The Province of Baltimore and the Province of New York, Section 1: Comprising the Archdiocese of New York and the Diocese of Brooklyn, Buffalo and Ogdensburg Together with some Supplementary Articles on Religious Communities of Women.. (New York City: The Catholic Editing Company, 1914), pp.345-347 [hereafter The Catholic Church in the USA (1914)]

[6] Shelley, The Bicentennial History of the Archdiocese of New York,157.; “A New Vicar-General.”

[7] Shelley, The Bicentennial History of the Archdiocese of New York,158.

[9] The cornerstone was laid at Broadway and 131st Street. “Church of the Annunciation (Roman Catholic)”; Shelley, The Bicentennial History of the Archdiocese of New York,157.

[11] Shelley, The Bicentennial History of the Archdiocese of New York,157.; “Church of the Annunciation (Roman Catholic).”

[21] Shelley, The Bicentennial History of the Archdiocese of New York,157.

[39] “Father Donnelly’s Reward,” The New York Times, May 30, 1887.  It is not clear whether or not the “Arthur J. Donnelly” who was arrested in 1888 for “failing to comply with sanitary codes” is the same man. Identified as an undertaker rather than a priest in the news reporting, Donnelly unnecessarily exposed, and ultimately killed, tenement residents via scarlet fever because of an open-casket funeral service. This Donnelly admitted guilt and was held for trial. “Losing Contempt for the Law,” The New York Times, September 12, 1888.