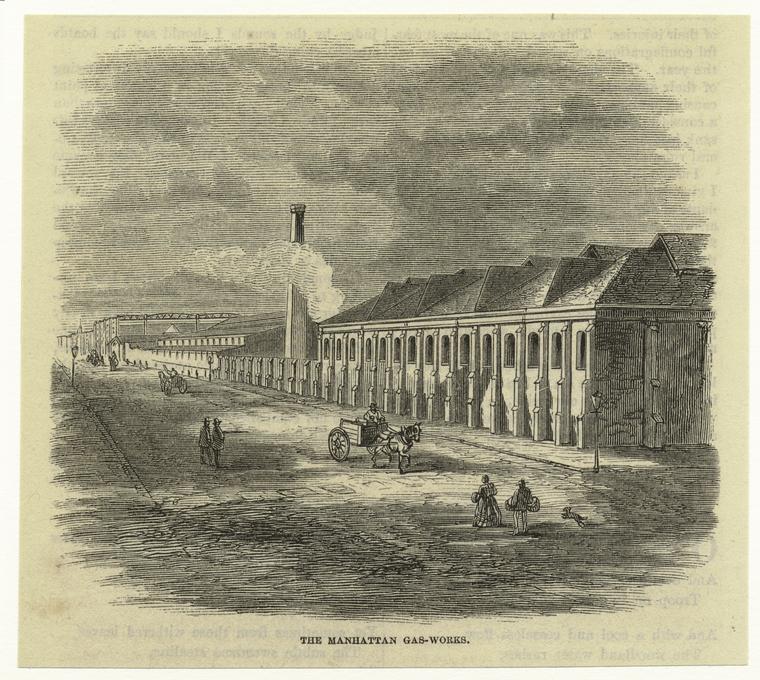 When this illustration was made in December 1862, the Manhattan Gas Light Company gasworks filled the entire block between East 15th and East 16th Streets, Avenue C to the East River. NYPL Digital Collections ID 805507.

In 1823, the New York Gas Company received a charter from the New York State Legislature to serve all of Manhattan south of an east-west line created by Grand, Sullivan, and Canal Streets. Its plant was located in Chelsea, west of Ninth Avenue.  Ten years later, the Manhattan Gas Company received a similar city license to service Manhattan above Grand and Canal streets.[1] Its manufacturing operations between East 22nd and 23rd streets, on the block between First Avenue and Avenue A, provided light and heat with gas formed from coal, replacing the whale-oil lamps that had provided illumination since the eighteenth century. Across the street from the gasworks were tenement houses numbered 185 to 195 East 22nd street, where many of the Castlegregory immigrants lived. These tenement houses were surrounded by a lime and stone yard, two lumber yards and shanty dwellings erected on vacant space where additional Castlegregory natives lived.

In 1850, angered by the high prices charged by the gas company duopoly, a newly established Gas Consumers Association demanded that the City’s Common Council build and operate a municipal gas plant.[2] The city authorities resisted these overtures, and even when Harlem Gas and Metropolitan Gas were established in 1855, “City Bank’s Moses Taylor, a Manhattan Gas director, proved able to negotiate an amicable agreement with the new outfits, forestalling potentially ruinous competition  and lower gas prices as well.”[3] 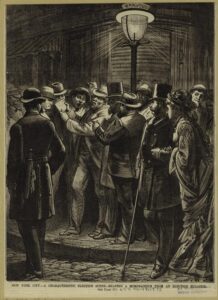 The Gas Works were regularly criticized for not providing sufficient city street light or for emitting noxious and malodorous gases. The New York City Daily Times opined in 1854, “Two great Reforms will make New York glad. They are: Light, and Clean Streets.”[4]  The article suggested that the City require the gas companies to ensure the lamps were lit at dark both in winter and summer “without regard to hours at which the moon may or may not shine. That lamps should be extinguished at the moment the rim of the moon appears, is a manifest absurdity.” In early 1854 the 18th and 21st Wards were partially lighted with gas, with completion expected by end of the year.[5]

The process of making town gas (syngas, CO, H2) from coal was dangerous and arduous for workers. In the gasifier, crushed coal was combined with steam at high pressure and temperature to form a mixture of town gas and other gasses.[6] Gas stokers had to shovel the coal into the furnace, and later take out the red-hot coke, usually working 12-hour shifts. There was “the ever-present risk of being badly burned if anything went wrong. It was not a job for the weak. Accidents must have been commonplace.”[7]

In a report on sanitary conditions in the 18th Ward in 1865, Dr. H.M. Field observed that gas workers (who included five Castlegregory emigrants with Emigrant Savings Bank accounts) endured extremes of heat and cold when feeding coal to the furnaces, breathing air heavily polluted with carbureted hydrogen. The doctor noted that “the ground all about a gasometer is as barren of trees and verdure as a desert of sand”, adding ruefully, “These are subjects which I hope to be able to give my attention to at some future time.”[8] In 1871, C.L. Everitt, the President of the New York Gas Company wrote to the Sanitary Committee of the New York Board of Health complaining that “judgment had been rendered against the Company on the grounds that odors emanating from their manufactory were a nuisance.”[9] Everitt claimed that new and improved methods of manufacturing had been approved by Professor C.F. Chandler, the Chemist of the Board of Health.

Chandler published a Report on the Gas Nuisance in New York (1870) which summarized hearings before the New York City Board of Health from 1868-1869. Most hearings were focused on determining the source of malodorous gases in the city and potential remediation based on research elsewhere in America and in Europe. Dr. Elisha Harris, a Sanitary Inspector for the City, testified in February 1869 that when gas-lime is exposed to the atmosphere, it gives off deadly gases and sulfide of ammonium which “may float far over the city, so far as to become dangerous to health to a great distance.”[10]  The Castlegregory immigrants and their families on East 22nd Street lived less than a block from the lime yard.

At a time when other gas companies had abandoned lime purification of the gas, replacing it with oxide of iron, the Metropolitan Gas Company “paid no heed to complaints of the citizens, but continued to send out the odors of foul lime,” principally from its works at 42nd street.[11] From these hearings, one can conclude that the Manhattan Gas works at 22nd and 23rd streets were less dangerous to the health of residents by the 1860s.

In the second half of the nineteenth century, with six major gas companies operating in New York City, the streets were constantly being torn up by one company or another installing or repairing their own mains – or removing those of a rival, occasionally leading to fights between rival “gas house gangs.”[12]

In May 1880, the city’s major gas companies reached another agreement on the price of gas and ended the construction of competitive mains. “It was a business arrangement that would be unlawful today but was legal, and sensible, at the time.”[13] However, by the 1880s, with electric lamps becoming increasingly popular in homes, the New York gas companies no longer enjoyed a monopoly on light and instead focused on selling gas for heating and cooking.

[2] New York gas rates were much higher than those in Philadelphia.  Edwin G. Burrows and Mike Wallace, Gotham: A History of New York City to 1898 (New York: Oxford University Press, 1999), 826.