The Albert Gallatin: Cursed Ships in the Waters of Irish Immigration

Like scores of brave men and women before them, Patrick Halloran and William Milner boarded a ship called the Albert Gallatin in Liverpool before setting sail for the United States. After months of uncomfortable conditions, Patrick and William arrived in New York City on the 28th of November, 1851, signing their names on the ship’s register.[1] In all likeliness, this young man from County Clare proceeded to enjoy a successful life as a nurse at Ward’s Island.[2] However, not all passengers on ships called Albert Gallatin — a moniker bestowing unluckiness upon its namesakes — made it to shore.

During the mid-1800s, many Irish fled miserable conditions in their home nation: “Without a doubt, the suffering in Ireland in the nineteenth century was unmatched anywhere on the Continent.”[3] The appearance of potato rot in 1845 sunk the agriculture-dependent Irish economy and led victims of “[f]amine, which favors no man” and “affected all classes of the population” to seek a better life elsewhere.[4] Before flight became widely available, “every Irishman who left his country left by sea.”[5]

Patrick and William’s Albert Gallatin, like many other ships at the time, transported Irishmen and women to America. This Albert Gallatin, a packet ship weighing a remarkable 1,445-1,600 tons, was helmed by Captain John A. Delano,[6] whose brother Joseph C. Delano also captained ships, including the Albert Gallatin during the year of Patrick Halloran’s crossing.[7] At one point, Delano became involved in a hearing requested by George Francis Train before the Liverpool port’s Board of Directors, which successfully argued for “fires and lights on the docks at night.”[8]

The Delanos’ Albert Gallatin docked at the port at Liverpool[9] as well as Belfast[10] and carried its passengers to New York Harbor. Grinnell Minturn, a successful shipping company transporting scores of immigrants to the United States, owned the vessel. However, Grinnell Minturn also dipped its toes into other areas of business, in 1882 suffering a lawsuit for activity related to railroads, which “in the forties and fifties enabled New York to retain its commercial primacy.”[11] The plaintiffs claimed Grinnell Minturn failed to properly elect the mandatory (by virtue of its articles of association) Board of Directors after May 1878. Instead, alleged the plaintiffs, the company “pretended to hold a meeting of the stockholders and bondholders […]. [A]t such pretended meeting but very few persons were represented […].”[12] Furthermore, “all of the persons last legally chosen as directors of the corporation, except two, have ceased to be stockholders,” and the notice for the election of May 1882 contained the forged signature of H.L Duguid, Seey. The plaintiffs also alleged the Board of Director meetings were held so disparately in order to benefit the “Bart Syndicate,” a railroad interest group, by issuing a perpetual lease to the unprofitable Boston, Hoosac Tunnel and Western Railway Company. The exciting result of this New York Supreme Court case was an injunction against the election of a Board of Directors until “having made at least two weeks’ previous publication in some newspaper published in the County of Onondaga, at least thirty days before such election,” and a payment of $1,000 made by the plaintiffs to the defendants for the undertaking of an injunction.

Patrick and William boarded the Albert Gallatin at Liverpool, previously a great center of the British slave trade. Liverpool boasted the Albert Dock, opened in 1845. “[F]or its time,” writes Irish scholar Terry Coleman, “it was gigantic, and so were its warehouses with their cast-iron Doric pillars. Liverpool was opulent, and the docks were a wonder.”[13] Despite the grandeur of Liverpool, ships docked at its port offered frequently miserable passage, particularly for poor emigrants. First, immigrants had to face down agents, responsible for serving as middlemen between passengers and ships’ crews. Though may were reputable, some were hucksters, and many foreigners were forced to remain on guard in their dealings: “Liverpool agents […] encountered the distrusting Irish, who usually refused to pay their passage until they saw the ship in the harbor.”[14] Some Liverpudlian ships were repurposed from the time of slavery and offered only the barest of accommodations. Passengers were packed in like sardines in order to maximize profits, leading to cramped conditions facilitating the spread of disease; as a result, “the microbes which also lived off the emigrant’s body bese[t], exhausted[ed] and often kill[ed] them at one or another stage of the journey.”[15] Above all, safety aboard could not be guaranteed.

2. Albert Gallatin and a Series of Misfortunes

Mysteriously, ships called Albert Gallatin brought particular misfortune to its passengers by virtue of a series of construction failures, violent incidents, and the will of God. As faithfully recorded by the newspapers, the Delanos’ Albert Gallatin suffered serious damage, brought small-pox to harbor, and hosted at least one murder. Yet, as we shall see, other ships named Albert Gallatin also met poor fates, making Albert Gallatin a supremely unlucky title for anything that floats.

The trouble began in 1854 when the Delanos’ Albert Gallatin “came in contact with the flying jibboom of ship Francis B. Cutting, lying at the same pier, and carried away the Albert Gallatin‘s main top gallant-mast close to the cap, yard, sail and everything attached.”[16] This was to prove a pattern in the history of the ships Albert Gallatin; one such named ship met its end at lightning strike, which destroyed “nearly half a million dollars” worth of cotton before forcing the crew to scuttle the ship.[17] At sea, in February of 1861 the Delanos’ Albert Gallatin came into severe weather around longitude 42 W latitude 49’30” N, prompting Captain Delano to “[throw] a bottle overboard, containing a memorandum to the effect that the vessel was suffering from a violent gale, and requesting any person who picked up the bottle to report the circumstance.”[18] However, the Albert Gallatin was left to limp back to port without assistance, arriving in March; the bottle was not picked up until August off of Scotland.

Even docked at port, the safety of those aboard Delanos’ Albert Gallatin could not be guaranteed. Having returned from Liverpool to dock in New York City on July 14th, 1857, it was discovered that the Albert Gallatin had unknowingly transported at least 53 cases of small-pox. By the next day, all passengers were admitted to quarantine to avoid its spread.[19] In addition to disease, Delanos’ Albert Gallatin attracted violence. As The New York Times reports, on the 1st of April 1864, the Coroner Collin conducted an investigation aboard the Albert Gallatin regarding the fatal injuries of William Henderson, a sailor. The victim of a drunken argument, the Scottish William met his end “at the hands of a shipmate named Patrick Clark,” an Irishman ten years younger, having returned from a night of celebrating.[20]

Yet the Delanos’ Albert Gallatin is not the only Albert Gallatin that experienced poor luck. By far, the most spectacular incident aboard an Albert Gallatin took place in 1875. In August, while undertaking the notoriously difficult passage around Cape Horn, “the rudder of the vessel was carried away on the 2d of the month, and from that time till the 15th ineffectual attempts were made to rig a steering apparatus.”[21] After failing to fix the ship, a crew of at least 29 abandoned the Albert Gallatin in two boats after spotting the nearby Ile Detonso; only the group of nine headed by Captain Groves made it to shore. The other boat has not been seen since. The captain’s family and several crew members survived off meager foodstuffs and “melted snow gathered on the rocks”[22] until at last, 18 days later, the ship Syren rescued the marooned former passengers. In December, the group of survivors at last saw land at Honolulu, Hawaii.[23] The Albert Gallatin never again reached port. 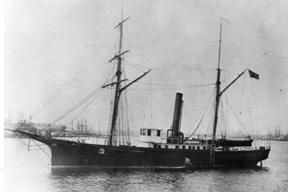 In 1892, in the midst of a deep and treacherous fog, the Albert Gallatin, “considered one of the U.S. Revenue Cutter Service’s most able seagoing vessels,” wrecked at Boo Hoo Ledge in Manchester-by-the-Sea, Massachusetts. On January 6th, 1892, Captain Gabrielson piloted the Albert Gallatin on a routine voyage between Kittery, Maine and Provincetown, Massachusetts. Early in the morning, at approximately 9 55am, “the weather became thick and soon thereafter snow began to fall;”[24] consequentially, the captain decided to head towards shore to keep the Albert Gallatin from getting damaged. Unfortunately, he miscalculated his position and ran the ship aground, at which point the smokestack collapsed and killed the ship’s carpenter on impact. Though the rest of the crew escaped with their lives, the vessel quickly split and two and sunk to the bottom of the sea, bringing an end to yet another unlucky Albert Gallatin.

The multiple Albert Gallatins encountering a curious number of unfortunate events shed light on the dangers of sea travel in the mid-to-late 1800s and early 20th century. Irish immigrants escaping the famine of their homeland were not guaranteed to make it to make it across the ocean. The ocean remained a challenge for fleeing foreigners and ship captains conducting routine patrols; the fickle nature of the sea was not to be underestimated.

[7] Michael Carolan, “An Irish Passenger, an American Family, and Their Time,” 2006, http://webpages.charter.net/mcarolan/ThomasCarolan.html.