By the summer of 1863, New York City was a smoldering cauldron of racial, class, religious, and political resentments. The city’s strong trade ties to the South and rapidly expanding immigrant base led to an identity crisis, with divided sympathy for the Union and Confederacy.

The outrage of working class New Yorkers was sparked by the implementation of the Union Army Draft, passed by Congress on March 3, 1863.[1] 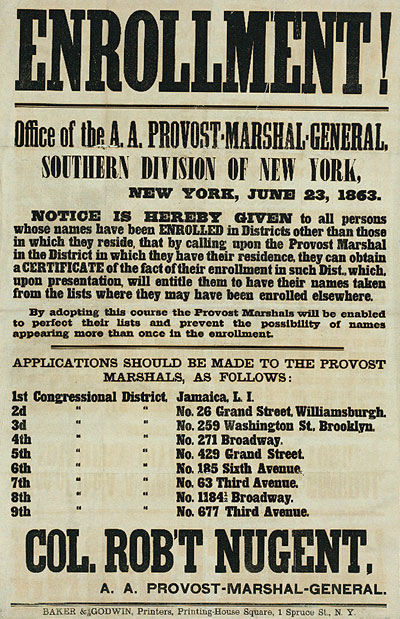 New York had already sent 13,000 troops, authorized the deployment of 30 more regiments, or 30,000 men, and the 69th Infantry Division, featuring the Irish Regiment led by Col. Michael Corcoran, deployed to the battlefield on April 23, 1861, depicted in the below image.[2] By the summer of 1863, casualties were mounting, leaving many Irish widows and orphans in the City. 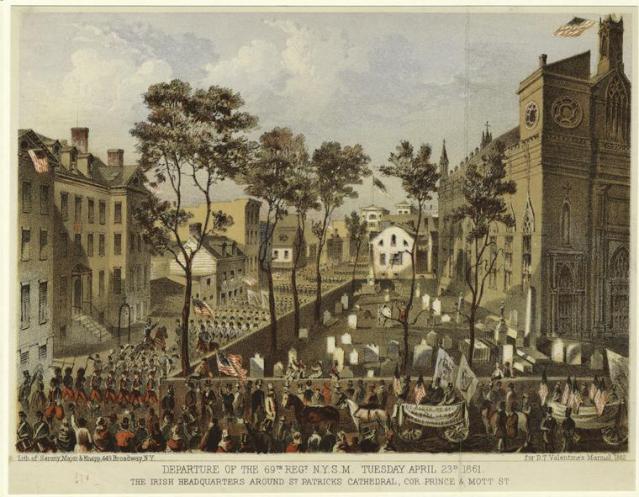 From July 13 – 16, 1863, thousands of disgruntled inhabitants ransacked and destroyed numerous buildings and attacked blacks in response to the draft laws. Particular resentment was directed at the wealthier men, who could afford to hire a substitute for $300 (equivalent to $5,800 in 2016).[3]

On July 14, 1863, the overwhelmingly white, and mostly Irish proletariat descended upon the Brooks Brothers store on Cherry and Catherine Streets. Known as a purveyor of clothes to the upper classes and a government war contractor, Brooks Brothers represented the toxic combination of both the war effort and social privilege.

During the Civil War, Brooks Brothers had outfitted Generals Grant, Sheridan, Hooker, and Sherman.[4] Additionally, Brooks Brothers had developed a contentious reputation; the previous March, 400 tailors had gone on strike for higher wages, and the firm was involved in a scandal for supplying shoddy uniforms to the army.”[5]

Harper’s Weekly reported: “a large number of marauders paid a visit to the extensive clothing-store of Messrs. Brooks Brothers…there they helped themselves to such articles as they wanted, after which they might be seen dispersing in all directions, laden with their ill-gotten booty.”[6] 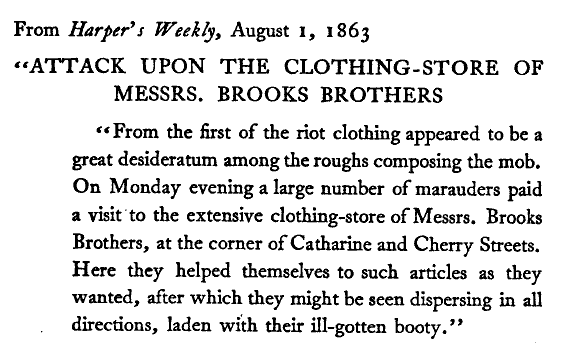 This below image of an almost “faceless mob outside Brooks Brothers highlights the men and women trying on their newly ‘acquired’ clothes in the foreground.’ [7] 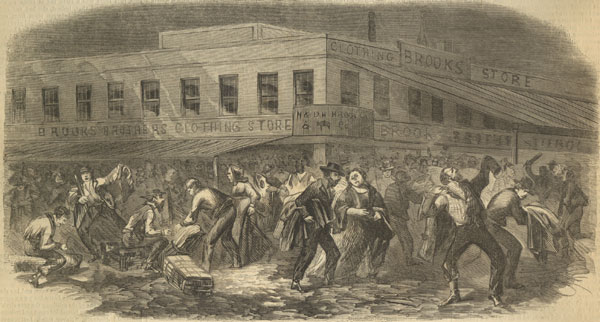 As an alternate depiction of the store’s looting, Frank Leslie’s Illustrated Newspaper published the following image, also on August 1, 1863.

Historian Adrian Cook’s study of the draft riots recaptures the experience of the mostly nameless individuals that comprised the mob.

Bolts of cloth were thrown through the windows and the street outside was festooned with lengths of material. Cherry Street was covered with hats, suits, coats, pants, overalls, jackets, vests, clothes of all kinds and colors and sizes. Rioters laden with plunder were staggering away down the streets. In the middle of the carnival, 150 police, commanded by Inspector Carpenter, came up and charged into the crowd. Rioters opened fire, and Sergeant Finney of the Third Precinct was shot in the face.[8]

“The attack was made at half past nine o’clock in the evening, at that time a young man named Theo Betts, salesman, was with me in the store; he slept in the store; the first signs of attack were small stones thrown through the window, over the door; then commenced a great deal of banging and thumping against the doors and windows on Cherry Street side, then the panels of the doors were broken in, and they put their heads in and called me names, and said if I did not open they would hang or shoot me…I went to the custom-room, got a rope, and let myself down into the back yard.”[9]

At a late hour on Tuesday night the mob, number 4,000 or 5,000, made an attack upon the clothing-store of Messrs. Brooks Brothers, in Catharine-street, corner of Cherry. Sergeant Finney, of the Third Precinct, while in the discharge of his duty in endeavoring to protect the property of this establishment, was knocked down, beaten on the head and body with clubs, and afterward shot in the hand by a pistol by one of the rioters. He was subsequently conveyed to the Station-house, where his wounds were dressed. He is very severely injured, and no hopes are entertained of his recovery. Officer Daniel Fields, of the same Precinct, was knocked down and brutally beaten about the head and face at the same time.

A man named John Matzel was shot and instantly killed. It is reported that he was one of the leaders of the mob, and that the ball which pierced his heart came from a revolver in the hands of one of the officers of the law. He was in the act of entering the clothing-store at the time he met his death.[10]

In his book, The Armies of the Streets: The New York City Drafts of 1863, Historian Adrian Cook presents a list of the victims, both injured and dead. Not surprisingly, a Brooks Brothers neighbor, William McCarthy of 113 Cherry, makes the “arrested” list, as do a few others.

The Metropolitan Police tried to quell the protestors, but were met with violence. According to an 1863 report by David Barnes on the Draft Riots and the Metropolitan Police, the officers “were engaged in discovering the whereabouts of the stolen goods, and in this their services have been of the utmost value, and by them an immense amount of property has been recovered.” Later in the report, Barnes describes how Officer Van Ranst of the First Precinct “received a pistol ball in his cap, where it was lodged, and was found by him the next morning.”

The Force of the First Precinct visited “the tenement houses in Cherry and Market Streets, and recovered several wagon loads of property,” as depicted in the excerpt below.[12] 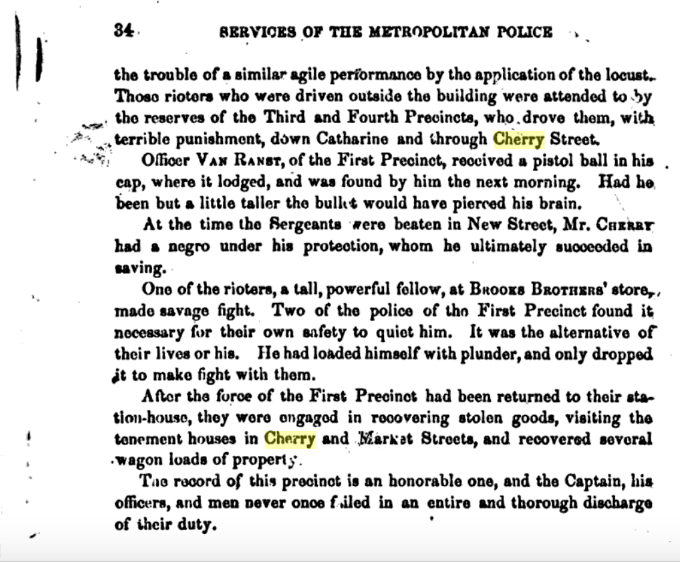 Excerpt from a Report on the Draft Riots (1863)
Source: https://books.google.com/books?hl=en&lr=&id=0mUod9zTN4kC&oi=fnd&pg=PA3&dq=brooks+brothers+looting+cherry+street&ots=V8Lu7Li3ZL&sig=phIzDAmKkjRfKt7YCgcBEZKc3J0#v=onepage&q=cherry&f=false

The night after the attack on the Cherry Street store, “careful watch was kept and a guard was mounted over the Brooks Brothers uptown store…There is in the present organization only one man who was then (in 1863) in the employ of Brooks Brothers. He well remembers, as a boy, keeping guard.”[13]

In a curious and revealing piece, Valentine’s Manual in 1864 denied any wrongdoing on the part of the Brooks Brothers management, asserting: “The Catherine Street store was sacked by a mob in 1863, for which no reason has, as far as we know, been assigned…Brooks are fair, upright gentlemen, of mild manners and such simplicity of deportment as to allay and conciliate rather than excite ill feeling.”[14]

The unchecked mob swept across the city. An investigation of nearby areas turned up $100,000 of stolen clothing, and one building was found to conceal 50 stolen suits.[15]

[2] “New York State in the Civil War.” The Division of Military and Naval Affairs. https://dmna.ny.gov/civilwar/

[3] Schecter, Barnet. The Devil’s Own Work: The Civil War Draft Riots and the Fight to Reconstruct America. Bloomsbury Publishing USA, 2009.

Samuel H. Williamson, “Purchasing Power of Money in the United States from 1774 to Present,” MeasuringWorth, 2016.