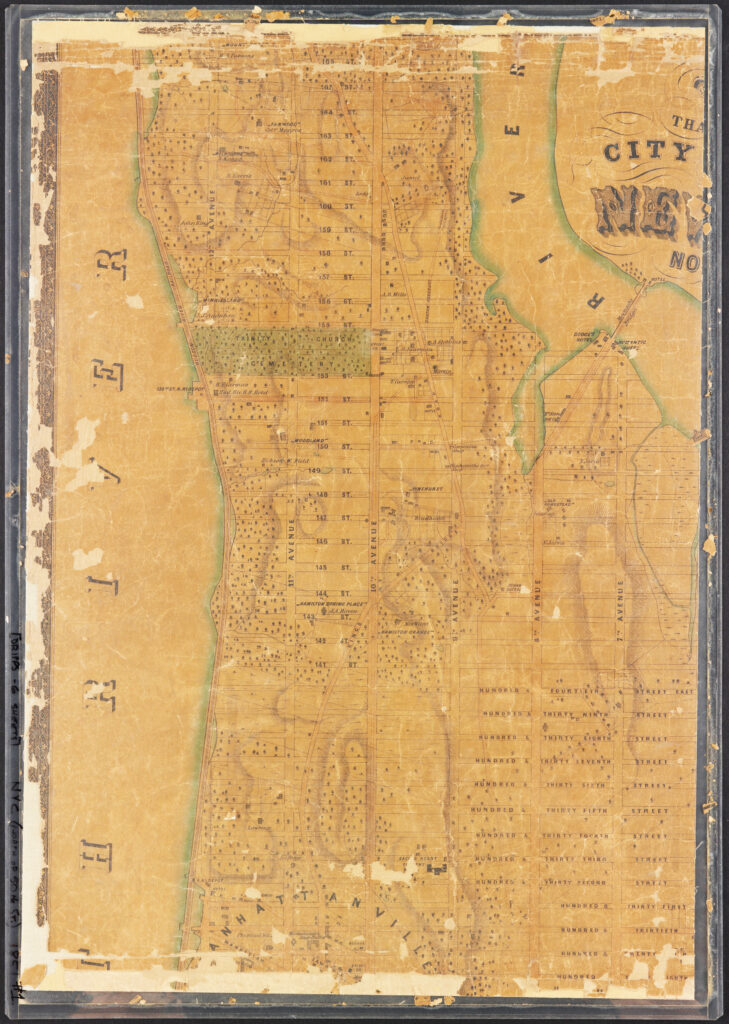 The village of Carmansville was situated in northern Manhattan, roughly between 140th and 158th street, although the exact boundaries appear to have been ill-defined[1]. The village, which took its name from successful former carpenter, contractor, and real estate speculator Richard Carman, began flourishing in the early 1840s when Carman bought a portion of land in the area that spanned from 152nd Street to 158th Street[2]. The village began to expand in the 1840s with the opening of the Hudson River Railroad, allowing rapid transit between Carmansville and lower Manhattan.[3] 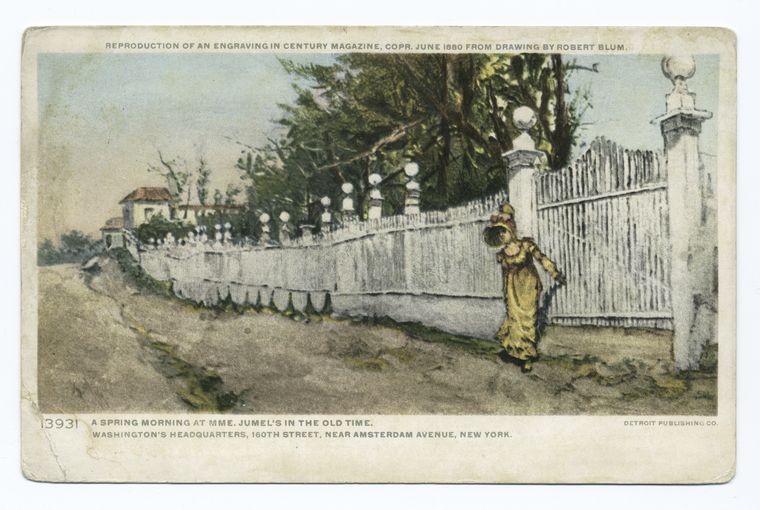 A postcard showing the fence outside the Jumel estate at 160th Street. The building served as George Washington’s headquarters during the Battle of Harlem Heights, and remains a popular tourist destination to this day. Source: New York Public Library Digital Collection
https://digitalcollections.nypl.org/items/510d47da-8697-a3d9-e040-e00a18064a99

By the 1860s, Carmansville consisted mainly of the imposing estate homes of wealthy merchants overlooking the Hudson.[4] Notable residents included several members of the Knapp family, such as Shepherd Knapp, a trustee of the local New York Institution for the Instruction of the Deaf and Dumb. Infamous socialite Eliza Jumel had been a resident of the neighborhood since 1810,[5] and John James Audubon had purchased a large parcel of woodland for his family’s home in 1841.[6] George Blake Grinnell moved his family to Carmansville in the 1850s, building an estate he called “The Hemlocks.”[7] While none of the principal landowners in Carmansville were of Irish birth, nearly all of the estates in the village employed Irish domestic servants, and many of the village amenities were owned or operated by Irish immigrants. 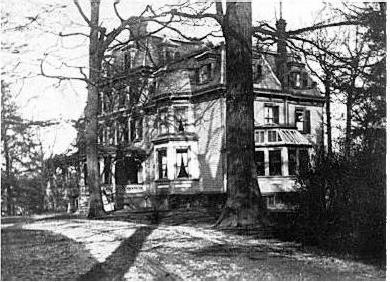 Carmansville’s estates were interspersed with village clusters of timber frame homes and shops.[8] The village also boasted a police station, a butcher, a blacksmith, and a grocer, as well as the sprawling Trinity Cemetery, which opened in 1842.[9] The Episcopal Church of the Intercession was the principal house of worship in the village. Catholic residents of Carmansville, such as the McAvoy family or the fifteen Irish-born servants employed by the New York Institution for the Instruction of the Deaf and Dumb, would most likely have attended the Church of the Annunciation on 131st street, just to the south of Carmansville’s borders.[10] Carmansville would not boast its own Catholic parish until 1889, when St. Catherine of Genoa was established on West 153rd Street between Broadway and Amsterdam Avenue; the parish was an outgrowth of the Church of the Annunciation, built to accommodate the burgeoning Irish community in Carmansville.[11] 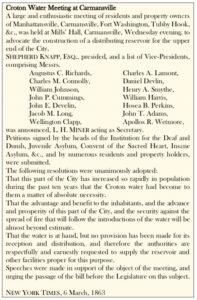 This New York Times article on a Carmansville community meeting to discuss access to the Croton water features several prominent residents, including Shepherd Knapp, Henry A. Smythe, and the principal of the New York Institution for the Instruction of the Deaf and Dumb, as well as Emigrant Savings Bank Trustee Daniel Devlin.

By the early 20th century, the neighborhood was comprised mainly of working class Irish and Irish-Americans to the east of Broadway, and more affluent white collar Irish and Irish-Americans to the west.[12] The neighborhood, no longer referred to as Carmansville, but instead considered part of Washington Heights, saw its first IRT subway station open at Broadway and West 157th Street in 1904.[13] The neighborhood became a popular residence for transit workers: a trend that continues today.[14] Far from the dearth of Catholic houses of worship that marked the area in the mid-19th century, Irish and Irish-Americans living in the neighborhood often identified themselves by their parish affiliation, as the Catholic Church established a string of parishes in the early 20th century.[15] Ethnic tensions began to plague the community in the 1930s and 40s when European Jewish refugees moved to Washington Heights in larger numbers, and led to a flare of anti-Semitic crimes by Irish youth gangs who blamed the Jews for the Second World War.[16] This violence was brought to heel through aggressive policing and community pressure on the part of local Catholic, Protestant, and Jewish organizations, and had largely died out by the end of the war.[17]

The ethnic homogeny of the former village of Carmansville broke down still further in the 1950s and 60s as Black and Puerto Rican families began to move up from Harlem.[18] Despite attempts at the pulpit to integrate the Catholic members of these disparate communities, an overall rise in crime and racial tensions in New York during the middle of the 20th century contributed to an Irish distrust of the newcomers.[19] Like many neighborhoods in Lower Manhattan, Washington Heights experienced the “white flight” of the 1960s and 70s as the Irish began to leave for the suburbs in ever-larger numbers. These vacancies allowed the Dominican immigration community to move in, as housing prices fell in the desirable Catholic parishes.[20] Today, the neighborhood boasts a vibrant Dominican community, many of whom are transit workers, like the Irish before them.

[10] The Catholic Church in the United States of America: Undertaken to Celebrate the Golden Jubilee of His Holiness, Pope Pius X, Volume 3. New York: April 14, 1912. p.313

[11] The Catholic Church in the United States of America: Undertaken to Celebrate the Golden Jubilee of His Holiness, Pope Pius X, Volume 3. New York: April 14, 1912. p.319