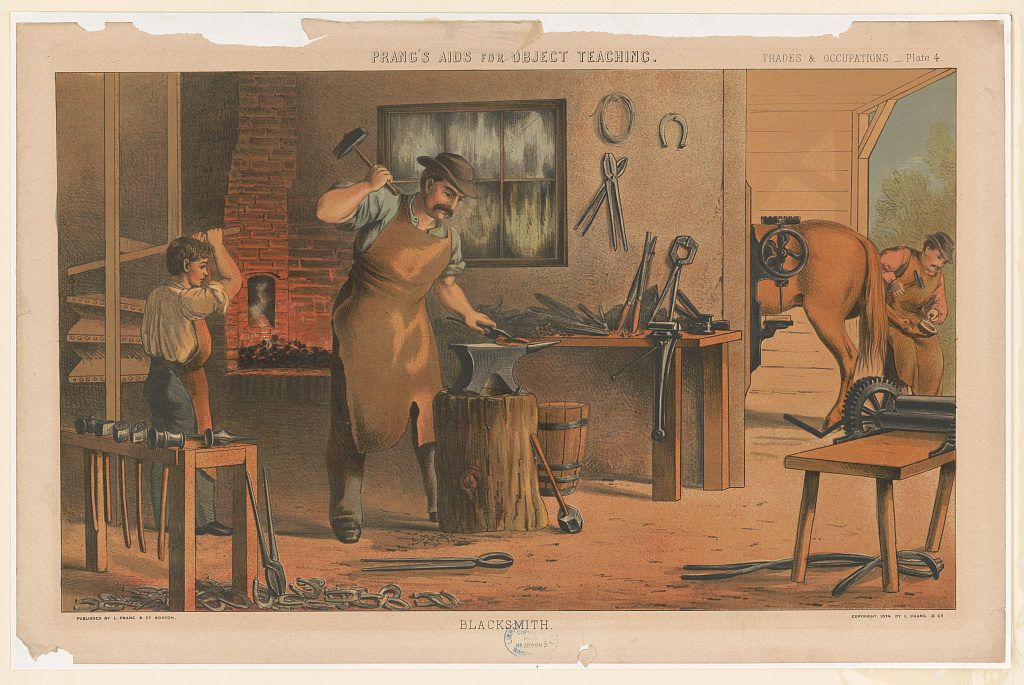 Beginning in the Iron Age, the art of blacksmithing expanded throughout Europe. In Ireland, blacksmiths were revered for their skills and products such as wheels, nails, and horseshoes.

In Celtic mythology, Goibniu of the Tuatha Dé Danann was a superhuman smith who made deadly arrows, spear tips, armor, and even the spear that was thrust into Balor’s evil eye [1]. Such power in Celtic mythology translated to practice in that blacksmiths, who provided the tools for warfare, were held in high esteem. In the subsequent centuries, the forge became a fixed establishment in the majority of Irish towns and a place where many Irish families passed down their craft across generations. 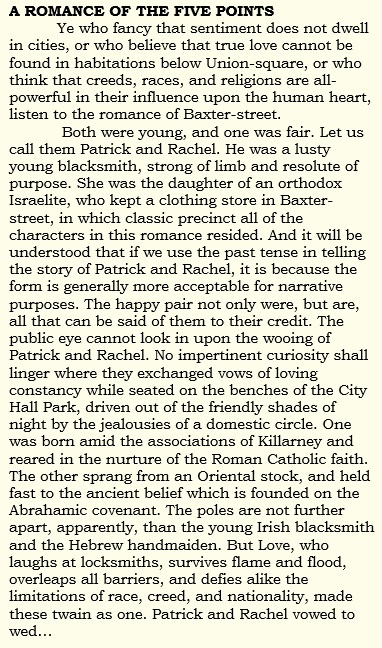 New York City provided a multitude of opportunities for the skilled working man, from the cobbler to the carpenter.During the nineteenth century, in contrast to specialized artisans such as shoemakers, blacksmiths were skilled in making a multitude of products, providing the metal objects that kept New York functioning [2]. The century was marked by a shift from

small scale blacksmith shops to mass production of supplies in factories at its conclusion [3].

Many Irish men were employed in foundries and ironwork, often in the shipbuilding industry[4]. Out of 2,159 recorded foreign-born blacksmiths in New York City in 1855, the Irish constituted 1,339 of that number, or 62%[5]. Two of those 1,339 Irish men were Michael Walsh and Michael Drohan on Ward’s Island. The 1845 Doggett’s New York City directory lists hundreds of independent blacksmiths as well as larger shops such as Dunn & Clarkson at the back of 52 Madison street[6]. On Ward’s Island, blacksmiths were employed in several institutions, including the lunatic asylum and the Emigrant Refuge and Hospital. Salaries were dependent on experience and skill level. At the Asylum for the Insane on Ward’s Island, wage disparities were immense between a novice blacksmith and his master. 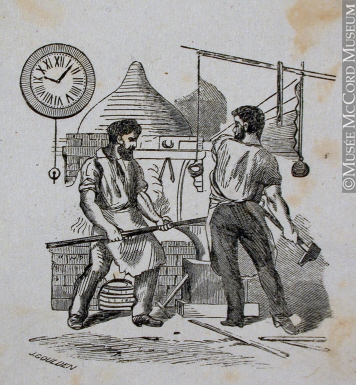 As the horse and cart became increasingly important over the course of the nineteenth century as a power source and transportation method, blacksmiths were relied on to create materials such as horseshoes[12] For the Asylum, blacksmiths would be responsible for forging items such as making horse shoes, hoes, bolts, and repairing items such as shovels[13]. Essentially, before mass manufacturing of metal objects became the norm in the city, blacksmiths kept New York City and Ward’s Island running through the metal tools necessary for labor and transportation.