By the middle of the nineteenth century New York City’s metropolitan hinterland was in transition.  In places like Brooklyn, Newark and northern Manhattan, the development value of rural land on the urban fringe began to outweigh its agricultural value.  Families that had been farming for generations gradually made new calculations about their future.  Commercial agriculture by owner-operators was replaced by market gardens overseen by tenants on short term, fixed leases.[1]  As it did for German immigrants at the time, this transition opened a brief window of opportunity for the Irish between 1810-1870.[2]  During this period, the locus for Irish farmers and gardeners also began to shift from Manhattan’s mid-East side – where Co. Cork native Thomas Crimmins worked as a gardener for the Irish American lawyer Thomas Addis Emmet, Jr.[3] – to the west side (West 44th-West 46th Streets between 7th and 9th Avenues),[4] then to north of 86th Street. 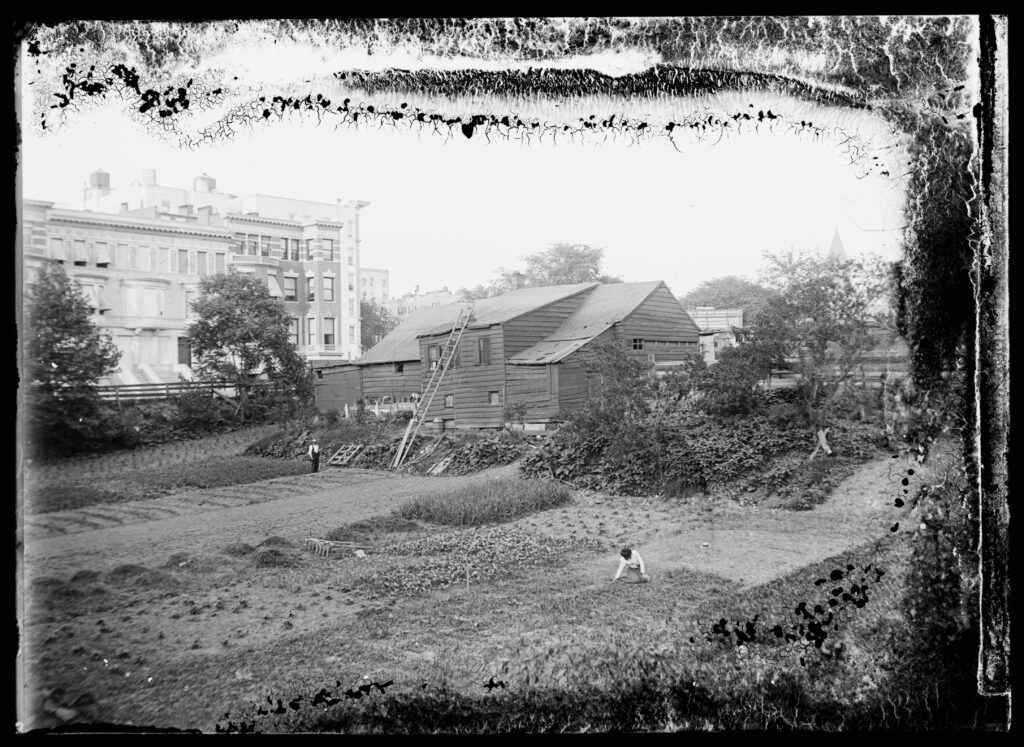 The 1850 census of New York County’s Twelfth Ward, for example, clearly enumerated twenty farmers and sixty-five gardeners who had been born in Ireland.  These Irish men cultivated American soil as independent producers or as employees on the country estates of Manhattan’s elite, growing fruits and vegetables, as well as tending milk cows and pigs.  The result of their labors was destined for local dining tables in Manhattanville, Carmansville and Harlem but also to stock the markets of the hungry city below 86th Street.

Among the oldest in this group of eighty-five Irish men is an extended family. John and Bridget Wallace’s household included his brother Morris (b. 1787) and her brother Bernard Kelly (b. 1785); all three men gave their occupation as farmer.[5]  John Wallace [also spelled Wallis] had emigrated in 1819 when he was twenty-one. Their late eighteenth century birthdates suggest pre-Famine emigration from Ireland that coincided with the earliest changes affecting New York City agriculture, such as the importation of cereal crops via the Erie Canal, and with the general profile that “after age 55” most farmers were “residentially stable.”[6]

Thus, as agriculture transitioned, some older Irish immigrants found uptown more conducive to their golden years than the crowded downtown wards.  Indeed, by 1855 when only forty-two New York County Irishmen gave their occupation as farmer, John Wallace had left his fields to deal in ice and his son Richard soon joined him in the business.[7]  This segue not only coincided with increased demand for ice in New York City as well as for ice exports through the port of New York, but also with the development of the Twelfth Ward as the residence of the wealthy.[8]  Michael Doran [also spelled Dorin and Doren], who was born in 1790 and left Ireland in 1823, operated a market garden in the Twelfth Ward.  Although it was not valued in 1850, by 1860 his real estate was worth $3,000.  But his six American-born sons found coachmaking a more lucrative — and perhaps less physically onerous — option than horticulture. [9] 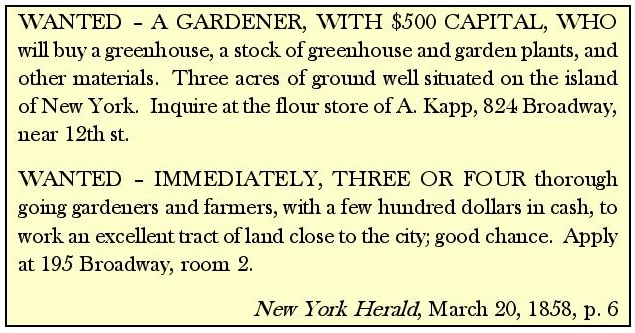 Of the Irish in agriculture in northern Manhattan in 1850, Martin Kelly [also spelled Kelley] is unique among those who were still working the land down to 1880.  Kelly was born in Co. Kildare in 1815 and emigrated on the Citizen from Liverpool in 1839.[10] Settled in the Twelfth Ward by 1850, soon he and his wife, Bridget, were raising four young children on a farm that comprised twenty improved acres and 130 unimproved acres.[11]  When Kelly opened two separate accounts with the Emigrant Industrial Savings Bank (EISB), he reported different occupations, indicating that there was some fluidity in precisely defining agricultural work, and/or that opportunities in the Twelfth Ward for growing skills could be adapted as needed. 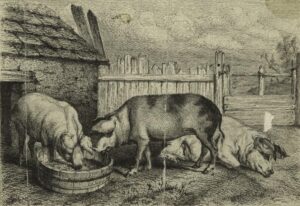 The principal New York City markets for swine were on the west side of Manhattan, between 37th and 44th Streets, when Martin Kelly was raising pigs. Illustration from 1871. NYPL DigID 823369

Kelly was a “farmer” in the 1850 U.S. Federal Census, a “gardener” when he opened EISB Acct. No. 7110 with $230 in June 1854, then again a “farmer” in the 1855 New York State census.[12]  His second account, No. 12931 (active for the next ten years), was opened in November 1856 and records him as a “farmer” in Manhattanville.  The 1860 Agricultural Schedule for the Twelfth Ward confirms that his livestock (four horses, six cows, and twenty pigs) were worth $950; his farm equipment was valued at $350; and he had a personal estate valued at $700.[13]  Kelly’s name on this non-population schedule suggests that he was indeed a farm owner-operator as distinct from holding a short term lease as most market gardeners did.[14]  However, there is ambiguity again in 1870.  Martin Kelly, “gardener,” had a personal estate of $400 but, in the second census enumeration that year, his occupation was “farmer.” [15]  In 1880 he was once again a “gardener.”

It is possible that the rapid development of the Manhattanville neighborhood surrounding his original holding between 1850 and 1880 meant that Kelly was both a farmer and a gardener in the eyes of his contemporaries, as was Co. Cork native Maurice Nunan who worked the old Dutch farmlands in New Utrecht (Brooklyn) that were undergoing a similar transition.[16] According to Louis Tremante, “Many of the European migrants arriving [in New York] in the nineteenth century possessed the skills to work commercial gardens on leased land” and “tenant agriculture [in the New York City region] persisted for years after farm owner-operators ceased to exist.”[17] It is also possible that Kelly had a relationship with the large greenhouses located near his home on West 130th Street in 1879.[18]

While the banker Andrew Carrigan gave his occupation as “farmer” when he opened EISB Acct. No. 15642 in 1857, perhaps in a nostalgic nod to his youth in Co. Longford, he certainly was more than fully occupied at the time as President of the Irish Emigrant Society, as a Commissioner of Emigration for the Port of New York, as a Trustee of the Emigrant Industrial Savings Bank, and soon to be President of the Bureau of Contracts for St. Patrick’s Cathedral.[19] Unsurprisingly, any “farming” being done on his estate was handled by his Irish gardener, Martin Powers. His fellow EISB Trustee and Manhattanville neighbor, the merchant Terence Donnelly, likewise employed Dublin native John O’Connell as his gardener.[20]  O’Connell opened EISB Acct. No. 6435 in February 1854 with $170 and deposited $50 more before the end of the year; with interest, he saved $226.81 over the course of thirteen months.  The modern value of O’Connell’s labor as a gardener is the equivalent of $54,400.00.[21]  By working for influential men like Carrigan and Donnelly, both Powers and O’Connell would have gained “experience under new environmental conditions” and have been able to parlay that “as a step towards tenancy” or as a springboard to other opportunities.[22] 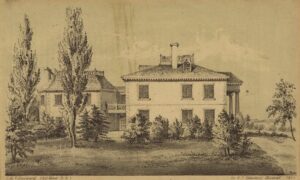 In 1860 the grounds of this Carmansville estate were maintained by John Kelly, the Irish immigrant gardener for Eliza Jumel. D.T. Valentine’s Manual (1854), NYPL DigID 805575.

The large Catholic educational institutions in the Twelfth Ward also hired agricultural workers.  As such, the Convent and Academy of the Sacred Heart point to a hierarchy within agricultural employment. Thirty-year-old Patrick O’Brien was the head gardener in 1860, supervising two farm laborers and one farm boy, all natives of Ireland, to provision about two hundred nuns and students.[23]

In addition to those who grew food for their employer’s table or for New York’s produce markets, gardeners grew ornamental plants, flowers and trees on northern Manhattan estates.  Employers of these men appear in the federal non-population census schedules for agriculture although they were surely “gentlemen farmers” or “horticultural enthusiasts” rather than actual hands-on gardeners.  The Carmansville banker Shepherd Knapp, for example, showcased at the annual horticultural fairs of the American Institute of the City of New York. In 1855 “his” plants in pots, roses, bouquets and baskets won at the June exhibition of the New York Horticultural Society, when he was its President and he had an English gardener.[24]  In 1870, Knapp was reportedly farming twenty acres worth $400,000, although he only had three horses and five cows on his estate.  His annual farm payroll, however, amounted to $3,000, some of which no doubt accrued to his thirty-year-old Irish gardener, Alexander McGuire.  If his salary was comparable to that of John O’Connell, then tilling the soil in the Twelfth Ward was far better than the annual wages for unskilled day laborers downtown.[25]

Another prize winner was William Fitzpatrick, a landscape gardener and skilled florist who had greenhouses in Bloomingdale, at West 100th Street and Broadway, in the early 1870s.[26] Born in Ireland in 1820, Fitzpatrick took first prize for floral ornamentation at the September 1859 New-York Horticultural Society fair for “Miss Flora McFlimsey”:

a lady composed principally of flowers…She is of full size.  She wears a crown composed of roses, tube roses, fuschias, and tamarisk, and a necklace made up of white and red globe amaranth.  Her bosom swells with roses, tube roses, delphinium grandiflora, and sweet alyesum.  Her dress is made of roses, dahlias, verbenas, marigolds, azuratum, and heliotrope, relieved by tamarisk and rose geranium.  She bears in her right hand a lily – Calla Ethiopica – and in her left a placard, giving her name and that of her inventor.[27]

At the time his “florist’s garden” was on West 29th Street and he had a storefront around the corner on Broadway, convenient to the wealthy who lived in Madison Square.[28]  His real estate was valued at $10,000 and his personal estate at $2000, a vastly different financial portfolio than that of Martin Kelly.[29]  This reveals that there was a very wide spectrum of economic opportunities available in New York City for those Irish with a green thumb, especially any who may have honed their horticultural talents on an Irish estate prior to emigrating.

Nevertheless, the rapid turnover in land use in Manhattan and an individual’s ability to adapt to new possibilities in the urban economy meant that Irish engagement with nurturing the soil in New York was, more often than not, limited to only one generation in the mid-nineteenth century.

[3] Mount Vernon “covered ten or twelve city blocks.  Its gardens and greenhouses were noted for their extent and excellence.” Edward J. McGuire, “A Memoir of John D. Crimmins,” The Journal of the American Irish Historical Society, Volume 17 (1918), p. 12.

[15] Martin Kelly, Ward 12, New York County, 1870 (2nd enumeration) U.S. Federal Census, Ancestry.com. This indicates that the Kellys may have been living on the grounds of the Convent of the Sacred Heart but in 1880, while still on West 130th Street, they are nearer to Tenth Avenue. Martin Kelly, Ward 12, New York County, 1880, U.S. Federal Census, Ancestry.com.