There were many educational opportunities for the New Yorkers in the nineteenth century, ranging from local non-denominational Ward Schools and public institutions to private academies and colleges. In the Twelfth Ward, north of 86th Street, all of these co-existed and the Irish can be found as both teachers and students where ever one looks.  While Trow’s New York City Directory listed seven schools at mid-century,[1] it overlooked the two major Manhattanville Catholic schools, the Academy of the Sacred Heart (est. 1847) and the Academy of the Holy Infancy (est. 1853), both staffed by European religious orders whose members included many Irish immigrants. 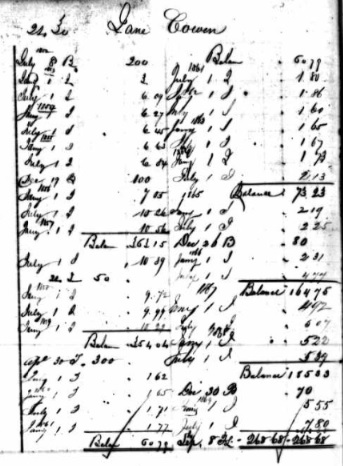 Emigrant Industrial Savings Bank (EISB) record of deposits, interest, withdrawals and balances for Jane Cowen. The twenty-two-year-old native and resident of Bloomingdale listed her occupation as teacher when she opened EISB Account No. 2430 in 1852. The daughter of Irish immigrants, Cowen may have been educated at the free school operated by the Academy of the Sacred Heart or at Ward School No. 43, and most likely worked locally in one of the neighborhood’s two schools for orphans. Her account was active for nearly twenty years, by which time she was keeping house in the 22nd Ward for her elderly mother and unmarried siblings, including Sarah Cowen who also became a school teacher. Her savings habits were consistent; she mainly collected interest and made only two major withdrawals: $300 in April 1859 and $268 in September 1869. New York Emigrant Savings Bank, Ancestry.com; Jane Cowen, Ward 22, District 13, New York County, 1870 U.S. Federal Census, Ancestry.com. 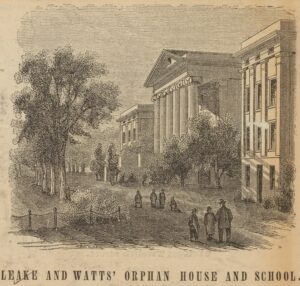 Established in 1831, the Leake and Watts’ Orphan House relocated to Bloomingdale in 1843. In 1855 this large asylum was home to inmates and staff, many of whom were first and second generation Irish. Its American Assistant Physician, George P. Cook, opened EISB Account No. 4753. Print circa 1850. NYPL DigID 5252597 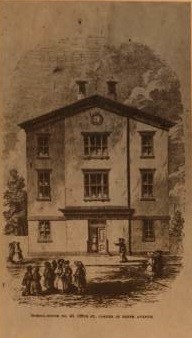 The New York Times described the new building for Ward School No. 43 as “neat and commodious” when it opened in Manhattanville in February 1855. NYPL DIGID715521F

The Society of the Sacred Heart (RSCJ), a French Catholic religious teaching order of women, operated a private boarding school for girls in Manhattanville from the late 1840s.[2]  Set on 53 acres, the Irish American newspaper described it as “one of the most picturesque spots on Manhattan Island,” “a sylvan retreat, in the true sense of the term,” “shut out from the rude contaminations of the world.”[3] In addition to developing the intellect of young women through science, math, literature, French, and music, there was an emphasis on refinement.  “We took ever care to perfect our children in correctness of language and distinction of manner,” Sr. Stanislaus Tommasini recalled, “And they were expected to be able to carry on a sensible conversation or to write a letter worth reading.”[4]  The annual commencement exercises, overseen by prominent clergy from the Archdiocese of New York and attended by hundreds of people, were elaborate demonstrations of the skills that had been mastered, such as a “performance on the piano by forty-eight and sixty hands simultaneously (on the same piece of music)…executed in such an admirable style that it seems to the listeners as if but a single performance upon one tremendous piano.”[5]  Tuition was $200 per year, in addition to “postage, stationery and washing…charged to the parents.”[6] 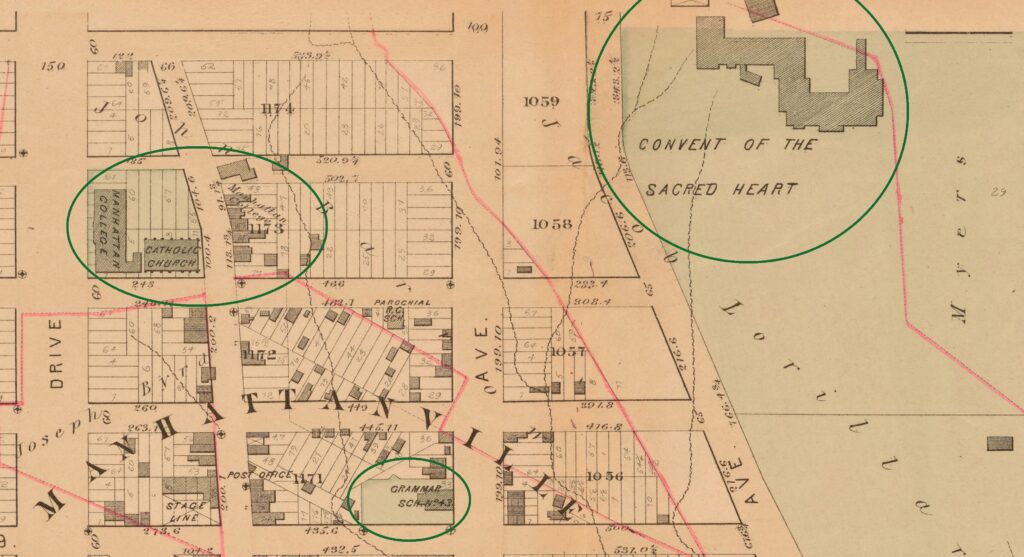 The large footprint of the Catholic institutions in Manhattanville — the Convent of the Sacred Heart, Manhattan College, and the Church of the Annunciation — dwarfed Ward School No. 43. Detail from Plate 29, Atlas of the entire city of New York (NY: G. W. Bromley & Co.,1879). NYPL Dig ID 5188178. 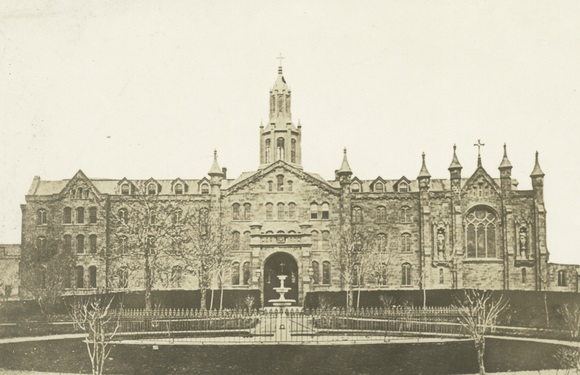 The 1850 census recorded 168 residents of the Convent of the Sacred Heart, including the order’s Provincial Superior, Sister Aloysia Hardey,[7] an internationally diverse teaching staff, and a student body largely American-born from several states.  Among the students being taught at the Convent’s academy that year were Emily, Isabella and Matilda Hargous, Eliza McMenomy, and Jane Connolly.[8]  The Hargous sisters were the daughters of Emigrant Industrial Savings Bank (EISB) Vice-President Peter Amédée Hargous, a merchant, who was a confident of Archbishop John Hughes.[9]  The McMenomy and Connolly girls were the daughters of EISB Trustees John McMenomy and Charles M. Connolly, both merchants from Ireland.[10]

By 1860, the Academy of the Sacred Heart in Manhattanville had fifty-four teachers, of whom six were natives of Ireland:  Catherine Winters, Margaret Keller, Annie Keller, Bridget Boland, Bedilia Ralph, and Maria McClew. [11] A decade later, the Convent was home to 109 nuns (professed and novices), of whom more than half (61 women) were from Ireland.[12]  This Irish presence in a French religious order dates from the establishment of a RSCJ convent in Roscrea, Co. Tipperary in 1842.[13]  The nuns in the Twelfth Ward were supported by a large domestic staff; in 1860 this included thirty-two women and six men, all from Ireland, including Fr. James Donovan, the chaplain.[14]

The Convent also operated a separate free day school for “indigent girls” that was subsidized by the Academy.  When the State Commissioners of Public Charities inspected this in 1870, there were “one hundred [pupils] in the primary, forty-five in the junior, and thirty-five in the senior department” in attendance, with 307 students on the roll book.[15] 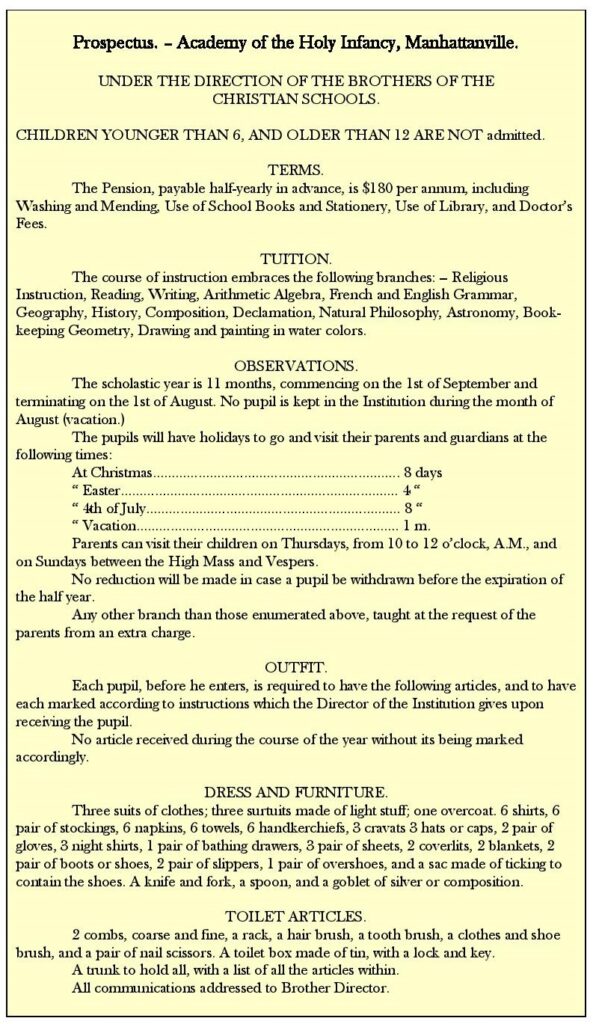 The education of Catholic young men in Manhattanville was also supervised by another French religious order, the Brothers of the Christian Schools.  Eleven brothers taught 75 students at the Academy of the Holy Infancy at West 131st Street and Broadway, in a setting described as removed from “hum and bustle of the busy world.”[17]  Archbishop Hughes introduced the Academy’s first Director, Brother Stylien (born L. Alexander Lessignol in 1808), to “several country gentlemen,” among whom were “Andrew Carrigan of Bloomingdale, Daniel Devlin and Terence Donnelly of Manhattanville, Bartlett Smith of Harlem Heights, and Charles M. Connolly of Washington Heights.” It was Carrigan who especially pushed Manhattanville’s advantages, even over the objection of Archbishop Hughes. [18]   He pointed out the Convent of the Sacred Heart to Brother Stylien and said:

You see, Brother, that height crowned with a cross.  To the left you see another, though lower eminence.  Now, we gentlemen have been thinking how gratifying it would be to the Catholics of New York to see another cross crowning the summit opposite the Convent.[19]

This was the old Lawrence estate, “a topographical wonder with solid hillocks of granite, fertile valleys, a few small groves and one or two plane areas” that included an old mansion and frame buildings that could be quickly renovated.  Purchased in 1853, it was debt free and incorporated by the New York State Board of Regents in 1863, ready to expand its curriculum to “the highest grade of education attained in the best American universities and colleges,” including “higher mathematics and natural sciences” as well as the classics, Greek and Latin. The students used the north gallery of the Church of the Annunciation as their chapel: “Here they made their devotions and in moments of distraction could appraise the feminine beauty of the parish.” [20] Like its neighbor, the Convent of the Sacred Heart, the Christian Brothers also staffed a local free school for 176 boys.[21]

Four Manhattanville Christian Brothers had EISB accounts, including Brothers Stylien and Paulian, Peter Connelly, and Sifroy Coulombe, a Canadian who did double duty as teacher and cook.[22] 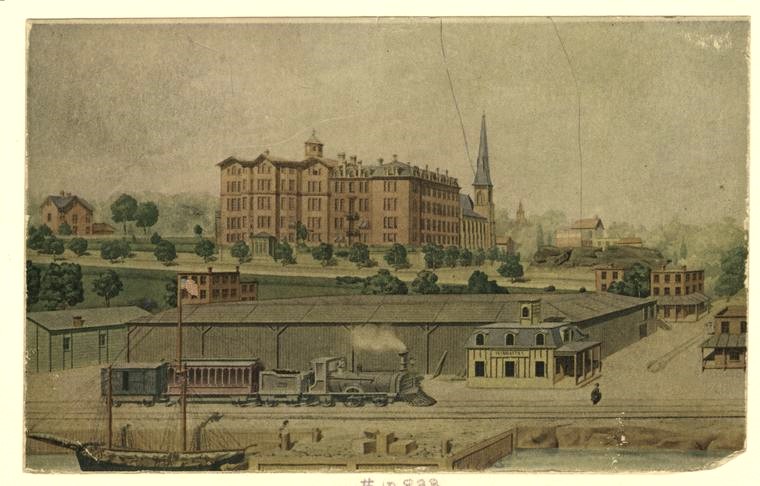 Peter Connelly was born in New Castle, Co. Galway in 1836; when he was fifteen, he emigrated on the Cambyses from Galway City and arrived in New York in August 1851. Within five years, he was teaching “with the Brothers” in Manhattanville, probably introduced to them through their downtown free school in the parish of St. Vincent de Paul on Canal Street. Between 1856 and 1869, Connelly saved more than $500.[23]

Patrick Fanning, who was known as Brother Paulian, was also from Ireland. By 1870 Fanning, a mathematician then age 48, was the Director of Manhattan College, a name change for the Academy that he suggested in 1861 to reflect “the historic island in which it stands” and to distinguish it from the village of Manhattanville.[24] He oversaw forty-three brothers, thirty-two of whom were fellow Irishmen, and twenty students, four of whom were boys from Ireland: James Gallagher, Joseph Brennan, David O’Connor, and William Kennedy. Fanning may also have inspired the selection of Irish music for the College’s 1865 commencement exercises at the Academy of Music. [25]

In 1866 Manhattan College conferred its first undergraduate degrees on six students, two of whom — John J. Keon and John P. McClancy — would later receive honorary LL.D.’s from their alma mater at the 1892 commencement at the Metropolitan Opera House.  Both had become priests: Fr. Keon was then at St. James in the Fourth Ward and Fr. McClancy was at St. Joseph’s, Middletown, New York. [26]

Also in that first graduating class of 1866 was Robert O. Glover, Jr., who grew up in Manhattanville next door to Fr. Arthur Donnelly and Daniel Devlin.  Although the family was American, they may not have been Catholic, which makes the choice of Manhattan College for an eldest son’s higher education distinctive, especially when it had yet to grant a B.A.  Robert O. Glover, Sr. was an insurance broker who sat on the New York City Board of Education for the Twelfth Ward.  His wife, Annie (an heiress nee Bibby), opened EISB Account No. 26384 in 1860 for Robert, Jr.  He went on to join the 22nd Infantry Regiment of the New York National Guard and rose to the rank of Second Lieutenant, became a dry goods clerk and, at the time of his death in 1892, had moved with his family further north to the town of Eastchester in Westchester County. [27]