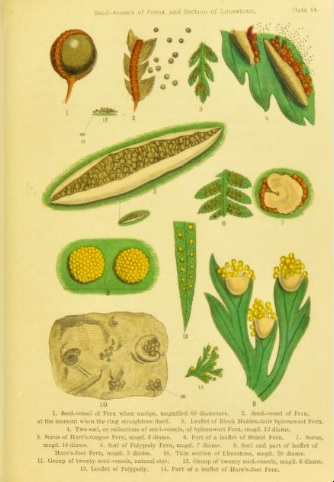 Gallen ferns and limestone as drawn by Mary Ward for Sketches with the Microscope, first published privately in Parsonstown [Birr] in 1857. Plate 14 from its 1859 reprint, A World of Wonders Revealed by the Microscope. https://archive.org/details/b28056231/page/n81/mode/2up

The King’s County barony of Garrycastle includes the parish of Gallen which had a population of more than 5,000 in the late 1830s.[1] This part of what is today western Co. Offaly was the birthplace of the Whelans (Patrick, Margaret, and Mary) and Mary Silk, whose mother was a Whelan.[2]  Their world would have been centered on the town of Ferbane and the village Cloghan.  In 1837 Samuel Lewis noted that Cloghan had “84 dwellings, which are chiefly thatched and neatly whitewashed cottages.”[3] He described the “verdant plains and rich plantations” surrounding Ferbane, where there were 106 houses, a dispensary, and a police station.[4]   Altogether, there were also ten schools in the parish that educated more than 500 students.[5]

There were reports of great distress in Gallen due to bad food or no food at all during the Famine; as early as September 1845 “more than usual destitution” was anticipated in the area because of the failure of the potato crop.[6] Yet, the Whelans did not emigrate to New York until 1852, perhaps because their landlord gave them rent relief, or because they were only four-and-a-half miles from the food depot established at Banagher in the winter of 1846.[7]  Griffith’s Valuation notes only one Whelan household in 1854 in the Gallen townland of Stonestown, just south of Cloghan, on 39 acres rented from Peter H. Thompson.[8]  Perhaps the Whelans were subtenants of Frederick Ponsonby, whose resident agent was widely acknowledged to be a good one. James Devery “promoted alternative agricultural foodstuffs rather than the affected potato crop,” including Swedish turnips and oats.  He also proposed “a premiums scheme… to reward tenants who kept their holding clean and neat and who drained the land.”  The Ponsonby family was said to be the “most indulging and humane landlords [who] have seldom or ever…ejected any tenants even when years of arrears have been due.”[9]

According to Ciarán O’Reilly, “In June 1846 James Devery, agent on the Ponsonby estate at Cloghan, complained that despite a relief committee being set up for the parish of Gallen nothing had been done and requested that he be sold Indian meal from the store in Banagher in order to feed the poor of the area. Devery hit on a crucial point when he lamented the fact that all the able bodied workers in the district were employed at ‘fair wages’ but that their earnings were not enough to purchase food for their families, probably owing to the inflated price of provisions that came to be exploited by merchants and others.”[10]  The following year worsening conditions prompted even Devery to undertake an assisted emigration scheme for 350 Cloghan tenants, as well as evict “twelve to fourteen families comprising about seventy-five people.” The total population loss in Cloghan between 1841 and 1851 was 613.[11] Another local landlord, Sir Andrew Armstrong, evicted “forty-two families comprising 220 people” and levelled “twenty one houses…at Gallen” in 1851 as he was forced to sell off land to pay accrued debts.[12] If the Whelans were tenants of Armstrong, this may explain why they emigrated to New York in 1852. 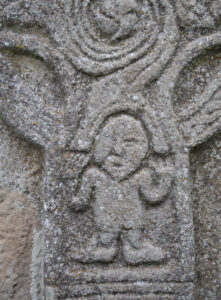 The principal Armstrong estate was at Cloghan Castle, “beautifully situated in a richly wooded demesne bordered by the River Brosna.”[13]  Sir Andrew Armstrong represented King’s County in the British House of Commons from 1841 to 1852.[14]  The Armstrong Bridge, built in 1805 over the Grand Canal in Gallen, was named for this Anglo-Irish family.[15]  Armstrong was born in nearby Ferbane, on what is now the site of Gallen Priory.  This was the location of a medieval priory built in 492 by St. Canoc that was destroyed multiple times, lastly in 1548.  In 1872 one of its windows still stood and a few sculpted slabs were recorded as being present at the site, one fragment with the inscription Diam.[16]  A Mr. Donelan, “whose father was a tenant on the Gallen Estate, and lived to be 103 years old, informed [E. C. R. Armstrong ] that two individuals leased the land and discovered the slabs when they were plowing in front of the present house and moved them to the grass mounds.”  Armstrong, who “was related to the family that owned the land, indicated that when he surveyed the mound in 1907 he only discovered two slabs. Along with another member of the family, the author opened the mound to find many slabs” which he described in a 1908 article called “An Account of Some Early Christian Monuments Discovered at Gallen Priory.”[17]

The other notable houses in Gallen were Strawberry Hill, Castle Ivor and Clonony Castle. The scientist Mary King Ward, a native of Ferbane and a cousin of Lord Rosse, published Sketches with the Microscope (Birr, 1857), which was subsequently reprinted as A World of Wonders Revealed by the Microscope (London, 1858).

[16] Grass mounds were said to be “probably the site of the original foundation” and “it is not unlikely that were this mound opened many other slabs would be discovered.” George Petrie, Christian Inscriptions in the Irish Language, Volume 1, ed. Margaret Stokes (London: Oxford University Press, 1872), p. 11.

[17] E. C. R. Armstrong, “An Account of Some Early Christian Monuments Discovered at Gallen Priory.” The Journal of the Royal Society of Antiquaries of Ireland, Fifth Series, 38, no. 1 (1908): 61-66. Accessed March 2, 2020. www.jstor.org/stable/25507657.  In 1934, an archaeological excavation was undertaken to discover the remains of the monastery. A description of the excavation can be found in the duchas.ie records. The description of the area that was to be excavated was recounted as “a grassy mound that stretches from the lawn boundary in front of the Priory for a length of about 60 yards.” The record includes a description of the excavation as well as drawings of the site. The account was given by Mr T. D. Kendrick to Sister Patrick in Ferbane. “Gallen Priory Excavations, 1934,” The Schools’ Collection, Volume 0813, p. 302 National Folklore Collection, UCD. https://www.duchas.ie/en/cbes/5044626/5026971