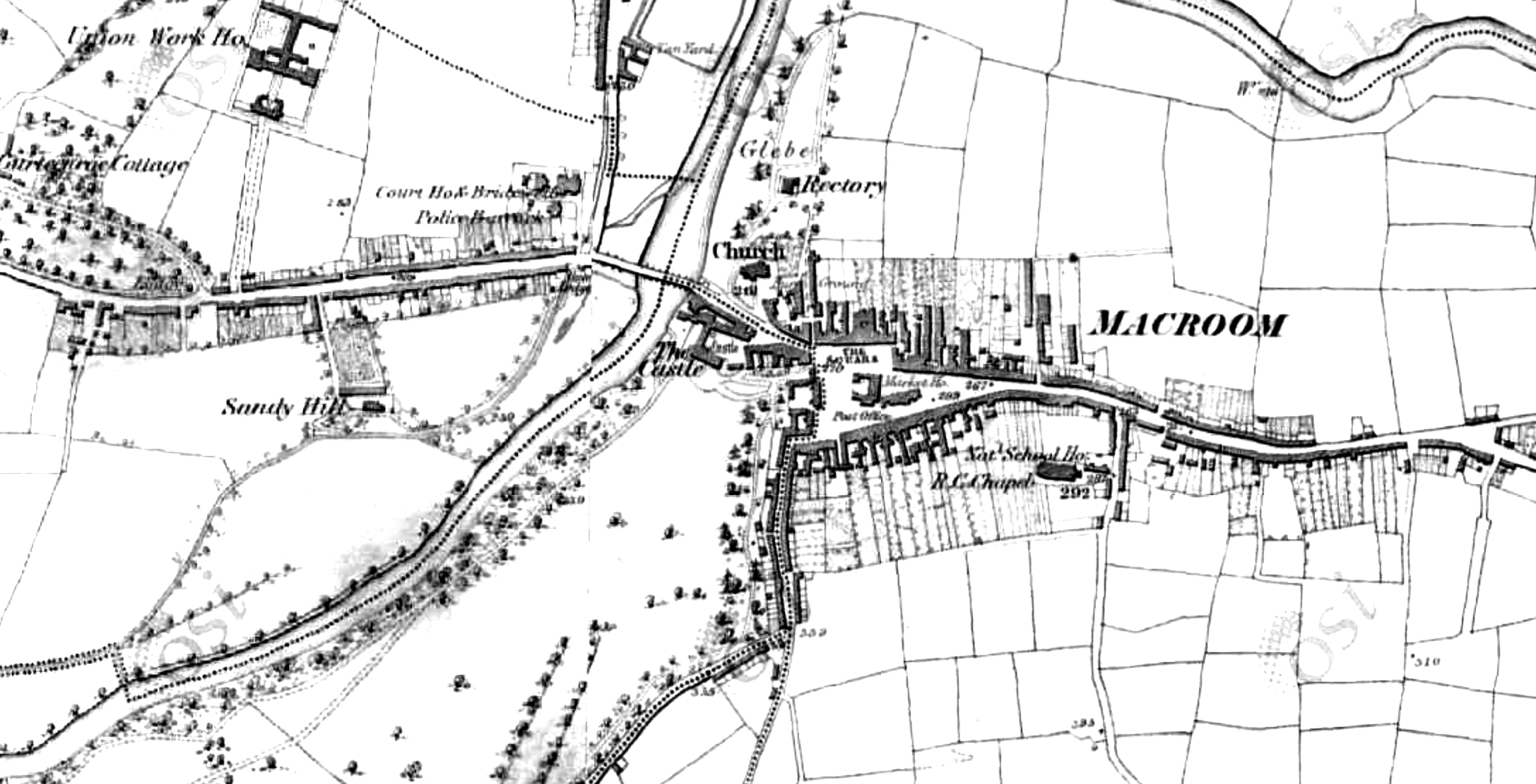 The town of Macroom with its centrally located square. The Ordnance Survey Office, Phoenix Park, Ordnance Survey of Ireland, 1834-1845, 1st Ed, 1:10 (Dublin, Ireland: For Her Majesty’s Government by Hodges and Smith, 1837), https://map.geohive.ie/mapviewer.html.

Between 1850 and 1860, at least 145 Irish people settled in the rural 12th Ward of upper Manhattan. Mid-nineteenth century Irish immigrants to America are typically categorized by their tendency to settle in cities. Historians have argued that the Irish fleeing the Famine at midcentury much preferred to settle in overcrowded tenements than return to a rural or agricultural setting akin to what they left in Ireland. However, a closer study of those who did settle in the much less crowded 12th Ward challenges the validity of such assumptions. A sample gathered from the Test Book records of the Emigrant Industrial Savings Bank, which opened in 1850 on Chambers Street in Lower Manhattan makes it possible to gather detailed information both about account holders’ past life in Ireland as well as their new situation in New York.

The sample of 12th Ward residents born in Ireland shows that the largest percentage came from County Cork. In his study on that county, David Dickson explained how the extreme diversity in soil quality, agricultural produce, fertilization, and population distribution combined to create an elusive and complex landscape.[1] To gain a clearer picture of the emigrants from Cork and attempt to understand their motivations for emigration and resettlement, it is necessary to look at their individual townlands.

The town of Macroom lies about 24 miles northwest of Cork City; it is bisected by the River Sullane, which flows out from the town and joins the River Laney and further on the River Lee. The latter was an essential waterway through Cork City and by extension to Lough Mahon and Cork Harbor. As such, from early on Macroom was an important location in Irish history. Its Castle, situated at the town center, was likely built in the 12th century by the Carew family during the reign of King John.[2] From then on, the Castle changed hands in ownership several times and was a frequent site of conflict during the 17th century.[3] However, it was not until the early decades of the next century that Macroom significantly developed in terms of infrastructure, organized agriculture, and manufacturing. By that time, Richard Hedges had taken authority over the “improvement” of the town by “building up a Protestant settlement” there.[4] This would have been an especially pressing issue for English settlers as, in 1766, 89% of Macroom’s families were Catholic.[5] His efforts seem to have been successful, both in beautifying the town and laying out a recognizable urban plan. Whether by Hedges’ design or not, by 1824 Pigot & Co.’s Directory wrote that the surrounding land “abounds with the seats of highly respectable and opulent gentry.”[6] Indeed, it would seem that Hedge’s work contributed to a level of significant economic prosperity since “towards the end of the eighteenth century every farmer thereabouts had owned fourteen to twenty milch cows.”[7] However, like much of County Cork following the Napoleonic wars, goods from Macroom dropped in value, resulting in a devaluation in farm prices.[8] 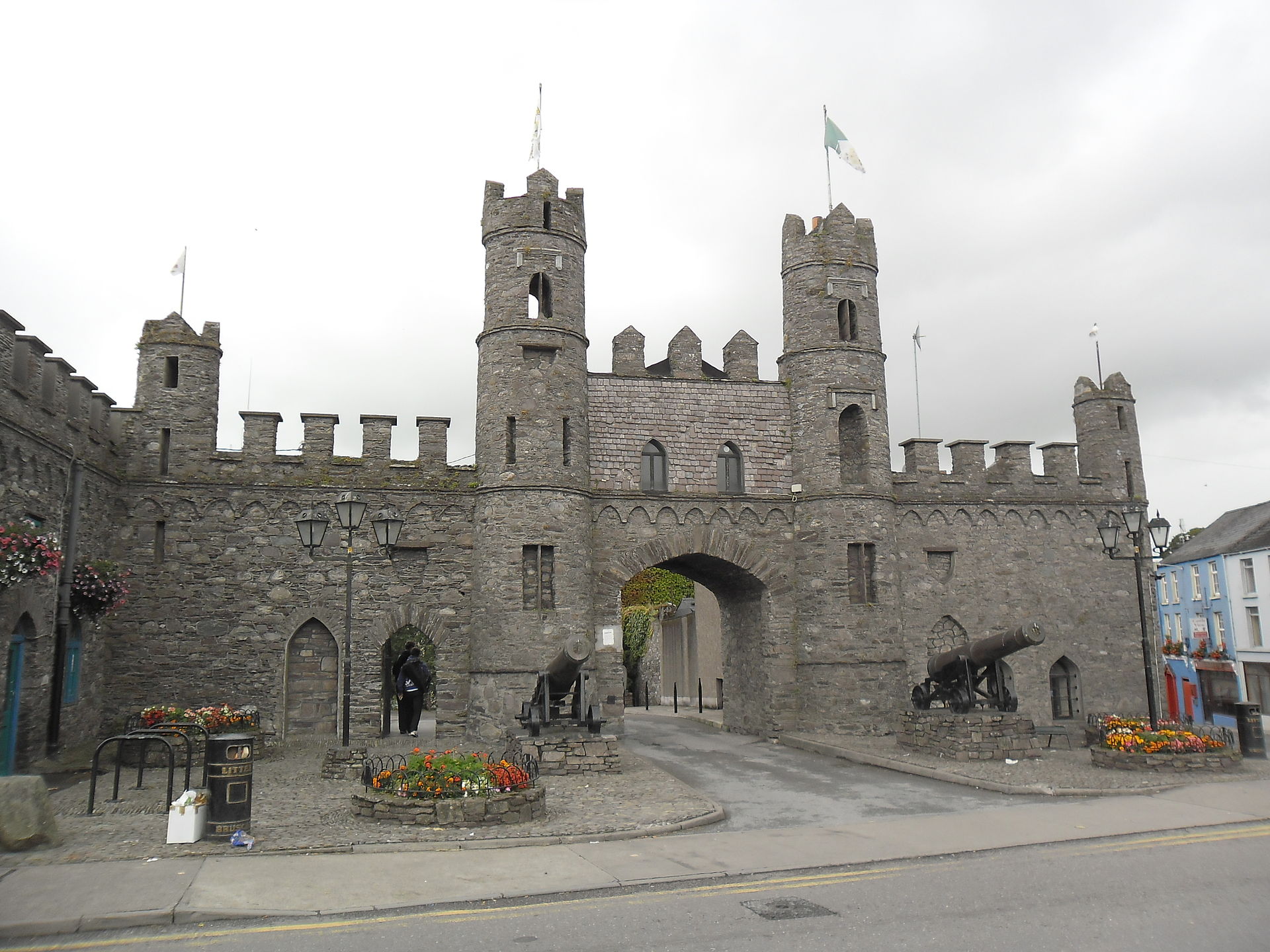 By the time Samuel Lewis described Macroom in his 1837 Topographical Dictionary, the town was prosperous once more. The Ordnance Survey maps completed between 1829 and 1841 show that the town’s center (about 200 feet east of the Castle) was dominated by a large market house.[9] Lewis notes that this newly erected building was a flourishing hub of commerce: “The principal trade is in corn, which is brought into the town daily by the farmers, and purchased on account of the Cork merchants; the quantity sold during the year 1835 exceeded 39,000 barrels.”[10] The market itself was held on Saturdays and was “abundantly supplied with butchers’ meat, vegetables, and provisions at a moderate price.”[11] There was also a significant trade in pigs that were slaughtered and sent to Cork for domestic consumption as well as export.[12] As such, emigrants from Macroom would have been familiar with the supply chain and distribution of agricultural produce.

John Creedon was born in 1817 in the parish of Clondrohid to parents Timothy and Ellen Creedon, two miles northwest of Macroom.[13] Its boundary extends for much of the surrounding geography in that direction.[14] Of its roughly 27,000 acres, 16,000 were arable and pasture land.[15] The Creedon family leased extensive plots of land throughout Clondrohid parish and while it is uncertain in what industry they worked, it is likely that they participated in agricultural production, turf harvesting, or stock-rearing and as such were familiar with marketing and trade.[16] His baptism record notes that the Creedon family resided in the townland of Mullenroe– about a mile from the town limits of Macroom. Griffith’s Valuation for Mullenroe notes a John Creedon leasing a house and 34 acres of land from Elizabeth Trelawney Townsend, the whole valued at £13.[17] John Creedon identified his birthplace as Macroom suggests that he may have relocated to the town center as an adult.[18] Griffith’s Valuation shows a John Creedon leasing a house and yard from Timothy Horgan on Pound Lane in Macroom. There is also at this time a John Creedon leasing a smaller house and yard on Main Street.[19] In any case, Creedon was probably familiar with farm labor, urban structures, and travel to and from markets.

Creedon’s migration in 1852 is made more significant by the fact that he lived and survived in Macroom throughout the duration of the Famine years of 1845 to 1851. County Cork was famously devastated by the potato blight and subsequent starvation and disease.[20] Indeed, Cork sent more Famine-era emigrants to New York than any other county in Ireland.[21] The effects of the Famine were well documented in British and Irish newspapers and it is in these that many shocking accounts are found. Macroom was particularly struck during these years: as early as 1846 Warren Crook, M.D., of the Macroom Dispensary noted the widespread unemployed and diseased residents suffering from “fever, certainly consequent on the use of unsound potatoes.”[22] In the summer of that year, a letter from the “The Distressed and Hungry” of Cork, Kinsale, Bandon, and Macroom implored the landlords and readers of the Westmeath Independent to “now come forward and admit what can no longer be denied.”[23] Accounts of men, women, and children dead in the streets from hunger and disease were not uncommon.[24] By 1847, the workhouse which had been built to accommodate 600 people, held at least 1,400 paupers. Thomas Coppinger wrote to the Kerry Evening Post on the conditions there: “A dreadful fever rages in the house, of which the master has died, also I believe the Schoolmaster. The Matron, Schoolmistress, and Nurse, are at present in fever.”[25] There seems to have been little or no significant intervention from the surrounding gentry. There was a minor return of the potato crop in 1847, but “by August 1848 the blight had returned in full force.”[26] In fact, W.H. White Hedges, the landlord at Macroom Castle, published a letter in 1849 denying his invitation to a meeting in Cork City (only 18 miles away) to discuss Famine aid.[27] 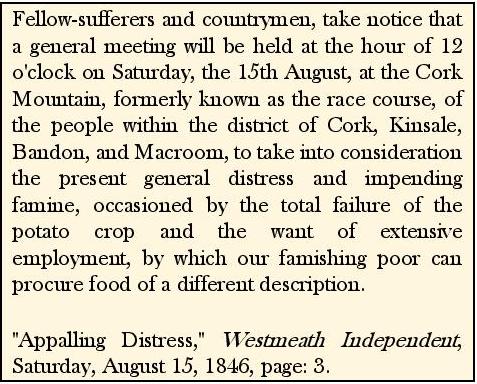 John Creedon emigrated only after the potato crops began to recover in Macroom.[28] Given such widespread suffering, what informed his choice to remain in County Cork? Did he feel there was any other option? Was Creedon, like those rural Catholic laborers discussed in Kerby Miller’s Emigrants and Exiles, so dedicated to his native land that he would rather suffer years of discomfort and poverty than chance the transatlantic unknown?[29] Or, was he, like the family of four in nearby Masseytown, able to survive on “the tops of leeks?”[30]

Historians have argued that because of the devastating memories of agricultural failures, most Irish emigrants chose to settle in densely populated urban areas in America. Indeed, Tyler Anbinder argues that “famine emigrants from Ireland’s countryside far outnumbered those from its cities, however, and these rural folk were far more likely than their urban countrymen to settle in close-knit enclaves in New York.”[31] Hasia Diner claims that despite the well-known truth that rural and agricultural land in the American West was readily available and despite the problems of urban life, the Irish seem to have been untempted.[32] And yet, a significant population of Irish-born New Yorkers chose to resettle in the fairly rural 12th Ward between 1850 and 1860. John Creedon, who had seen and survived six years of Famine-related horrors in Macroom, was one of them. Though it may be true that the majority of Irish Famine emigrants chose to settle in densely urban neighborhoods, the Irish-born 12th Ward residents suggest a more complex series of decision making. Furthermore, they suggest the resilience of the Irish emigrant and disprove that the Famine uniformly affected all those who experienced it.

[19] Richard Griffith, “Parish of Macroom,” Griffith’s Valuation, http://www.askaboutireland.ie/, 125, 136. Given the relative commonality of his name, it is difficult to assess which– if any or all– of these men was the John Creedon who lived and worked as a laborer in Carmansville, Manhattan.

[29] Kerby Miller, Emigrants and Exiles. Central to Miller’s thesis is the claim that many rural Catholic laborers were bound by their past and native culture to the land and in leaving Ireland came to see themselves as forced exiles rather than voluntary emigrants.