Forty people living on this particular Sixth Ward block opened accounts with the Emigrant Industrial Savings Bank between 1850 and 1860.  Of the 35 for whom place of origin in Ireland is recorded, 57% were from Leinster and 26% from Connacht, with counties Louth and Sligo particularly represented.  As can be seen from the graphic below, the Irish lived in most of the buildings on the west side of this block but Nos. 47 and 49 Mott Street had clear concentrations of immigrants from Ireland in 1855: 21% of households were 100% Irish while 24% were partially Irish.

Residents of eight buildings (representing 44 households) on the west side of Mott Street, between Cross and Bayard streets, 1855, by Nativity. Each address is represented by 2 columns; the left represents the male head of the household, the right represents his spouse. If the household was headed by a widowed man or woman, both columns represent that person’s nativity. Chart based on the 1855 New York State Census, created by Charlotte Leszinske, New York University (Spring 2017).

Doggett’s New York City Street Directory for 1851 listed the storefront businesses on this block as follows: 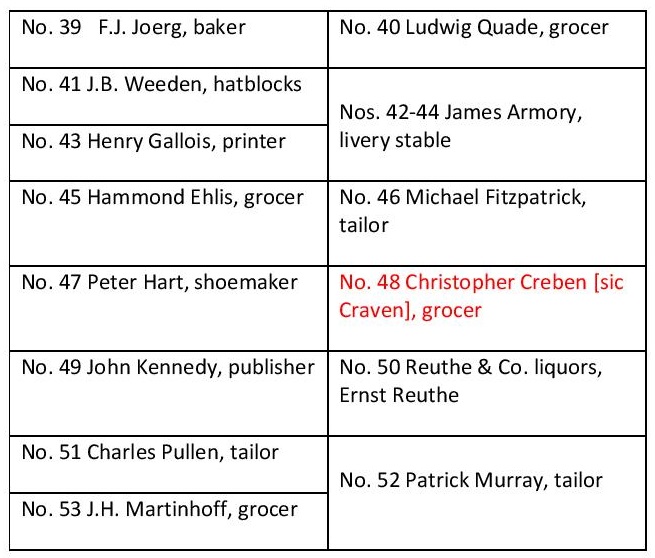 No. 47 Mott Street was home to fifteen Emigrant account holders, ten of whom were women; eight account holders lived in No. 49 Mott Street, above or behind the premises of the bookseller and publisher John Kennedy; and five lived above or behind the grocery store operated by Herman Ehlers [or Hammond Ehlis] at No. 45 Mott Street.  These three buildings were considered ‘first class’ brick tenements in the early 1850s; the rear buildings were second class.

The Irish-born grocer Christopher Craven opened account No. 19 with the Emigrant Savings Bank in 1850, one year after he became a naturalized citizen as witnessed by his neighbor Joseph Purcell at No. 54 Mott Street.  At the time, No. 48 Mott housed five families, including sixteen people who had emigrated from Ireland.  Craven employed three of them in his grocery.  When he died at age 39 in 1851, he left an estate of $4,000 for his wife and two very young children.  His widow, Julianna (also from Ireland) opened account No. 528 that year and kept it open until August of 1856 when her closing balance was $1,149.72. [1] 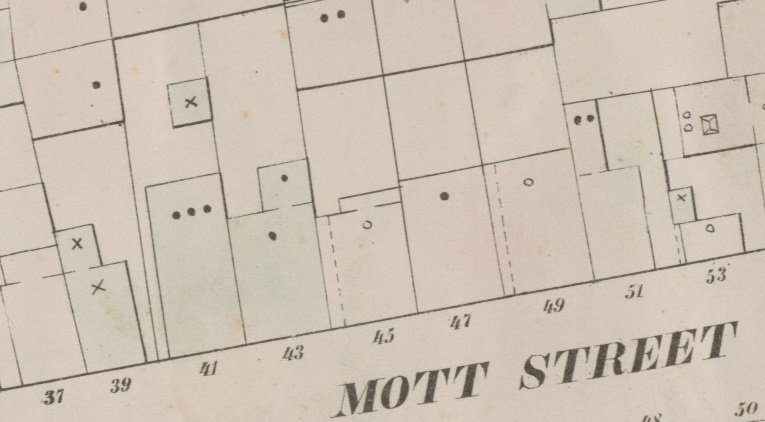 Only a few doors up from the Church of the Transfiguration, Kennedy’s book shop was ideally situated to sell Catholic reading material, rosary beads, and holy pictures as well as the newspaper the Irish American Weekly to local residents. [1a] 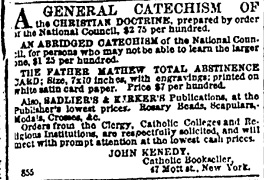 Advertisement, Irish American Weekly, 8 April 1865. The following year, the business was operated from No. 47 Mott Street as P.J. Kenedy with an expanded list of Catholic books for sale.

However, religion could not blunt some grim realities in the neighborhood, like epidemics, accidents, and domestic abuse:  in the spring of 1872 Irish native Mary Clarkson was beaten so severely by her American husband, a seaman, at this same address that he was arrested and she was sent to Bellevue Hospital. [2] 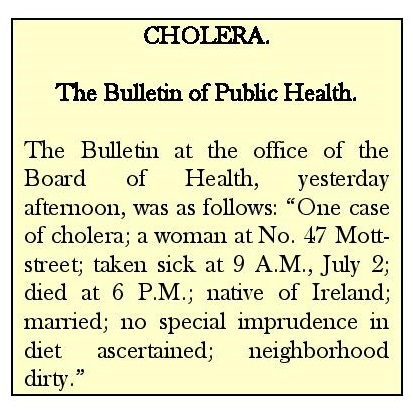 Danger from fire was an ever-present hazard in the tenements. New York Times, 23 July 1870.

The tailor William Scanlan, a native of Leixlip, Co. Kildare, lived with his wife Elizabeth and three children at No. 39 Mott Street in 1853 when he opened savings account No. 4201 with Emigrant.  This was a two-story frame house with a brick extension as well as a four story brick tenement behind it. It was not uncommon to maximize the rental potential of the average 25′ x 100′ city lot in this way.  Around 1867, Samuel Conlon, a broker who lived only a few blocks away at No. 121 Worth Street, mortgaged this property with Emigrant Savings Bank. At the time, the premises had a storefront bakery that had been operated previously by F.J. Joerg and would be consecutively operated for the next decade by Conlon’s tenants Matthew Ellis, Bernard Callan, and James Barry. [3] 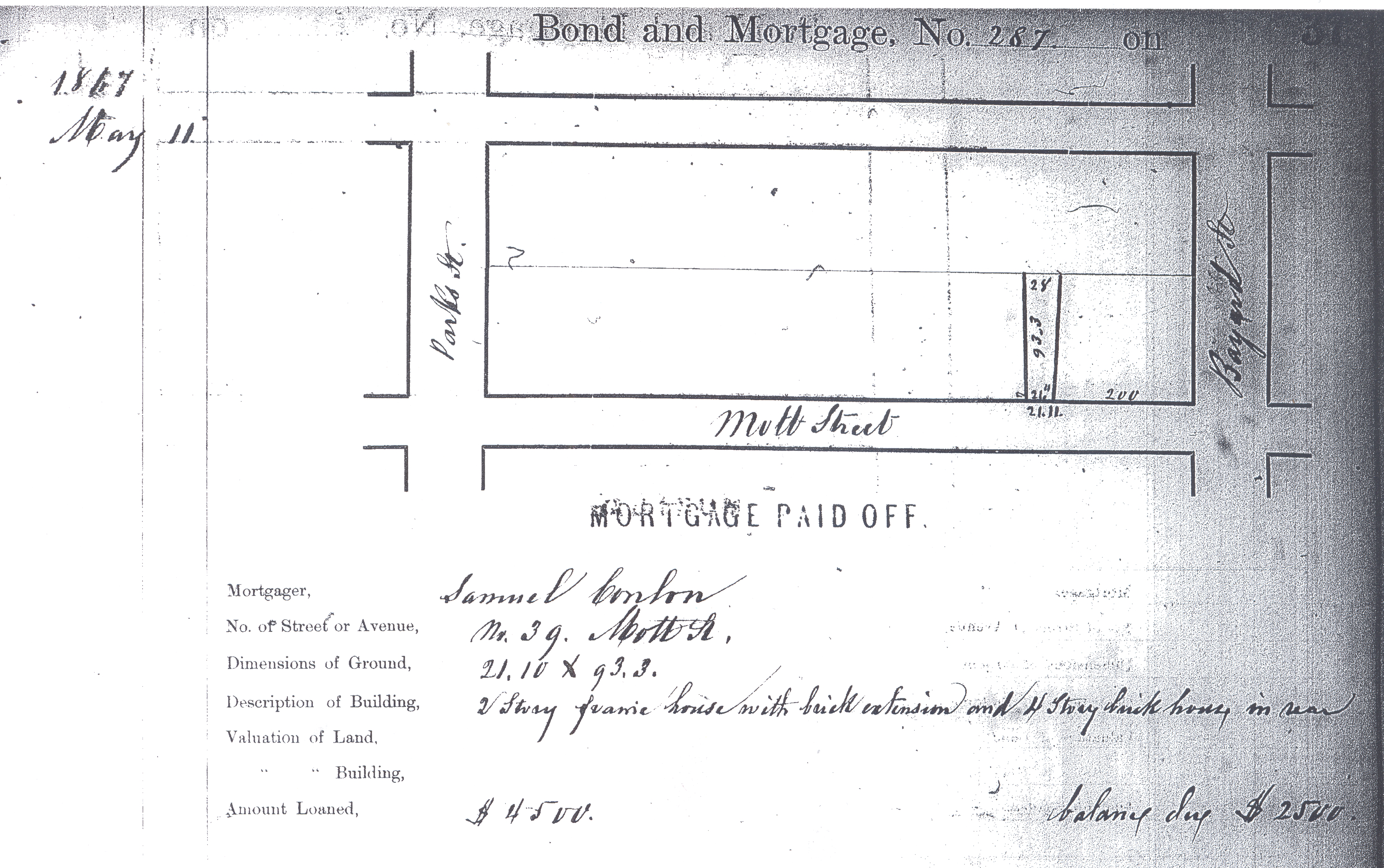 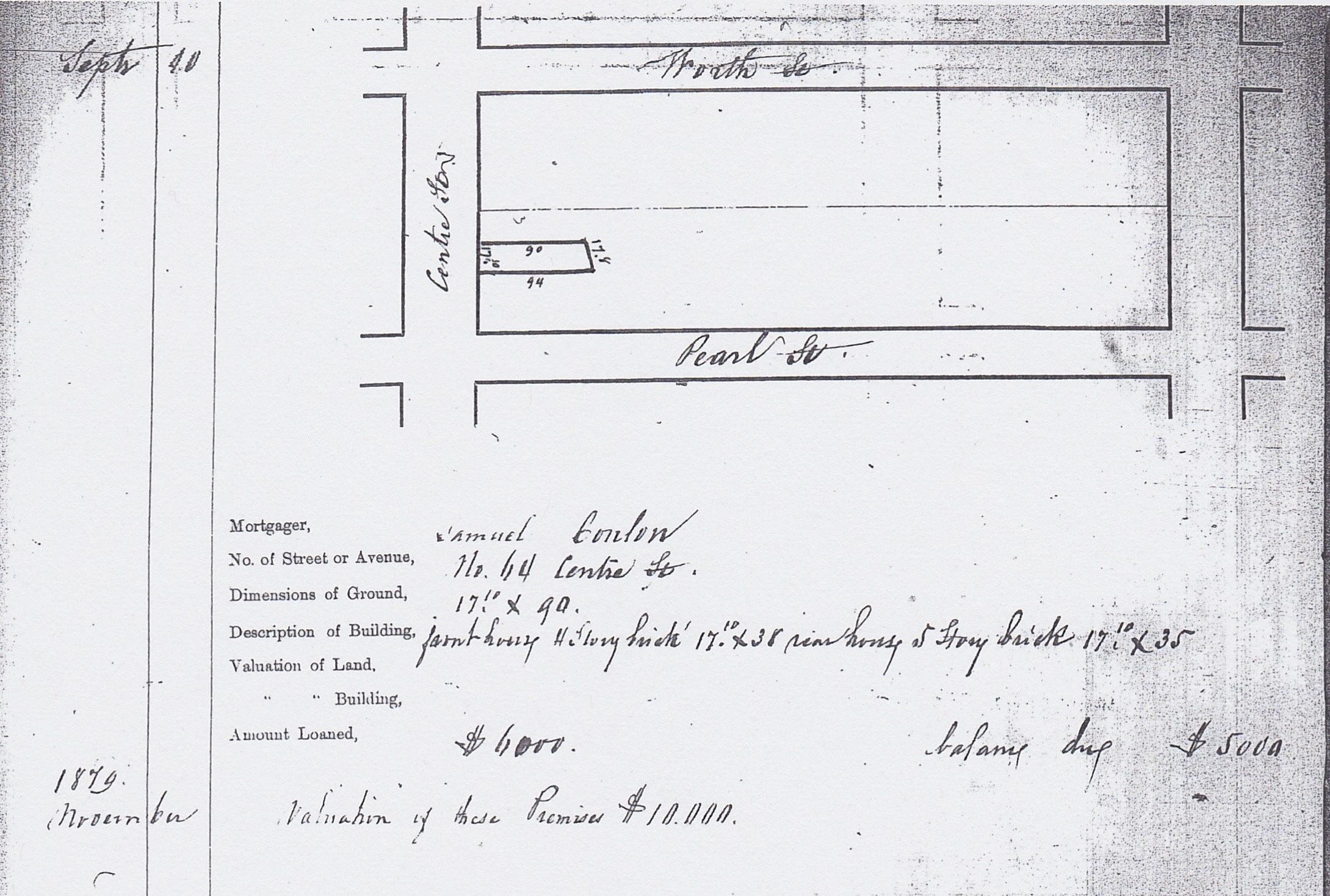