By the middle of the nineteenth century, many of New York’s elite had moved to the northern Wards of Manhattan where the landscape was more rural and far less populated than the crowded business districts to the south. The merchant magnate Alexander Turney Stewart famously spearheaded the building of monolithic, neoclassical mansions that were to pepper the length of 5th Avenue in the coming decades.[1] Stewart’s mansion at the northwest corner of 5th Avenue and 34th Street (across from the Empire state building today) was finished in 1866 on the site of a previous grand Samuel P. Townsend Mansion – only completed in 1855 and torn down by Stewart.[2] Yet, these homes, so antithetical to the long and narrow townhouses that populated the elite neighborhoods below 20th Street, were not limited to the grand thoroughfares.

In the far more pastoral landscape of the Twelfth Ward, covering the land above 86th Street, several other Irish business magnates settled in impressively large houses. In this area, Irishman Charles Dawson Shanly wrote in 1868, evidences of wealth and culture meet the eye everywhere.”[3] Following the Bloomingdale Road, which passed just to the west of Townsend’s mansion, north to 114th Street, was Andrew Carrigan’s palatial home which he built in 1836.[4] This Greek-Revival colonnaded building was, at the time, only accessible by the Bloomingdale Road (a northern extension of Broadway) and was surrounded by farmland.[5] Carrigan purchased the land in 1835 from Nicholas DePeyster following a fire that destroyed a previous house on the lot.[6] 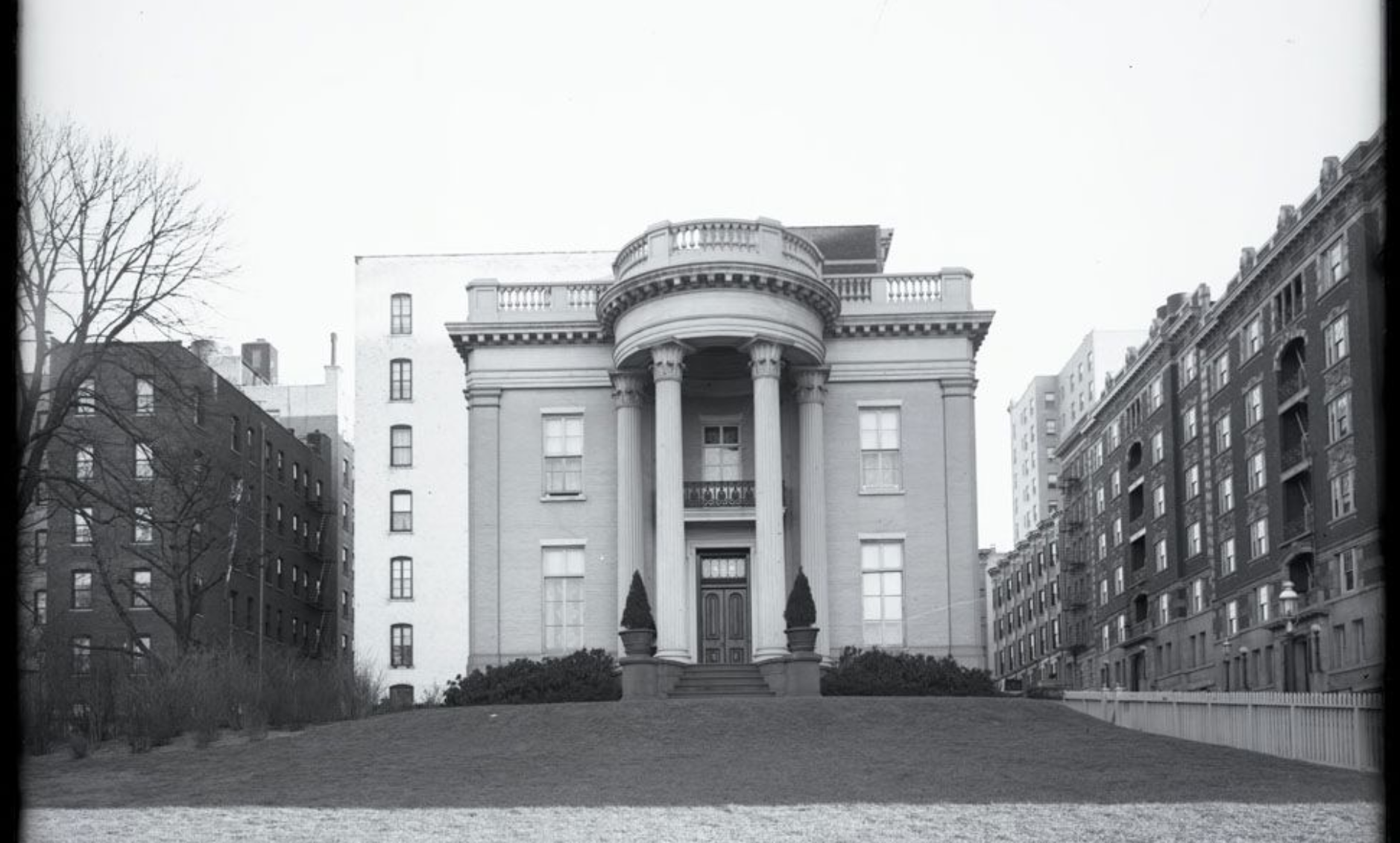 Carrigan was born in Co. Longford in 1809.[7] Following his emigration from Ireland circa 1821, he became a provisions dealer before going into real estate.[8] These enterprises proved profitable enough that Carrigan was able to retire in his fifties whereupon he quickly became involved in many philanthropic works.[9] He was one of two commissioners for the 12th Ward common school, which New York Governor William Seward championed as a way for Catholic children to get a secular education.[10] He, like many prominent Irish-Americans in his day, donated $1,000 to the first call for subscriptions toward the construction costs of Saint Patrick’s Cathedral.[11] In 1854, Carrigan became the president of the Irish Emigrant Society and, as one of the State Commissioner of Emigration, he was closely associated with the “formidable task of immigration reform.”[12] His widely-known close friendship with New York’s Archbishop John Hughes further increased his reputation as a dedicated champion of his emigrant countrymen and women.[13] In 1860, Carrigan was made Finance Chairman of the Emigrant Industrial Savings Bank.[14] This bank was particularly patronized by the urban Irish who were heavily concentrated in the 1st, 4th, and 6th wards, in close proximity to the bank.[15] Marion R. Casey has shown that financial policies spearheaded by Carrigan, his predecessor Felix Ingoldsby, and his successor Daniel Devlin, were instrumental in the early success of the bank.[16] Carrigan, however, was not the only member of his household with close ties to the bank.

Andrew Carrigan employed many Irish servants in his home in Manhattanville over the course of his time there. In 1855, he and his wife Catharine, their five children, and Carrigan’s father had five Irish-born employees.[17] Chambermaid Ellen Hernighan had been in the United States the longest at just three years; the others had been two years or less in the country.[18] That their cook, Mary Thornton, had only been in New York for a single year implies that the Carrigans went out of their way to employ new arrivals: the cook was the senior-most position among the service ranks and the social status of an employer often rested on the culinary abilities of the cook.[19] Indeed, census records show that the Carrigans cycled through many servants: all fairly young and of Irish nativity. By 1860, only their coachman – 19-year-old Thomas Donegan of Kings County, had stayed on but the other four positions in the Carrigan household had been reappointed.[20] Perhaps influenced by his employer’s position at the bank, Donegan opened an EISB account in 1857 with $30 noting his address as simply “A. Carrigan’s.”[21]

That same year, Mary Harton of Co. Louth arrived in New York on the Webster. By 1860, she was one of Donegan’s co-workers as a domestic servant at Carrigan’s Manhattanville mansion.[22] Inside the house, Harton worked alongside a fellow “domestic” Mary Riley (19) and the cook Rosa Coss (35). Coss would have enjoyed the highest wages as well as the highest social standing among the servants themselves.[23] Unlike single-servant households where one woman cooked, cleaned, laundered, answered the door, attended her mistress, and served meals, Coss likely had help herself in carrying out the many strenuous tasks that such a house demanded.[24] When a household employed more than one servant, the cook’s duties were typically confined to the kitchen while “the second servant usually combined chambermaid and waitress duties.”[25] This work included preparing the formal rooms in the morning, serving meals, attending to the bedrooms and bathrooms, dusting household items, and answering the door among others.[26] The third servant – if not expressly employed as a nurse or nanny for the household’s children – took on all extra work, including laundry, chambermaid duties, and needlework.[27] Six years Riley’s senior, Harton probably evaded the more arduous jobs such as laundry – although, given Carrigan’s wealth, it is quite possible that the household’s laundry was sent out.

While native-born American women displayed a general distaste for domestic service, believing it to be demeaning work, Irish women went happily and in droves into this occupation.[28] Because most domestics lived in the home of their employer, they avoided spending their wages on rent and groceries.[29] As such, domestic service could be an economically rewarding position: mid-century maids earned between $5 and $6 per month while cooks and ladies’ maids earned between $8 and $10 per month.[30] Though the deposit records for Harton are lost, the records of other similarly-placed Irish-born domestics reveal that these women could and often did save significant amounts. Matilda Downey of Co. Antrim worked for two prominent New York merchants in the 1850s as a servant and cook respectively.[31] She opened her account in 1851 with seventy dollars, consistently depositing between thirty-five and fifty dollars in 1852, 1853, and 1854; in February 1855 she had saved $261.63.[32] This sum, equaling about $8,000 today, is significant considering that Matilda had nine family members in Ireland to whom she very likely sent back a portion of her wages in remittances.[33] Nevertheless, it seems clear that while the work was arduous and the hours demanding, domestic service could be an excellent start to an immigrant woman’s life in New York. 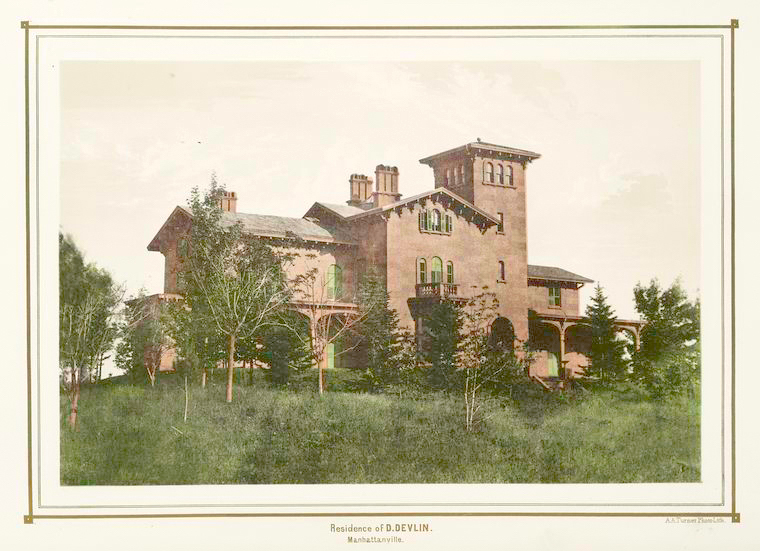 Harton is merely one case of thousands, and indeed in the Twelfth Ward, many other women led similar lives in similar households. Daniel Devlin, ready-made menswear magnate and Carrigan’s successor as chairman of the EISB’s Finance Committee, also enjoyed the quiet landscape of upper Manhattan at his home on West 135th Street which he called Craigmore.[34] Like Carrigan, Devlin was widely known for both his wealth and his generous contributions to charity.[35] His Italianate villa in Manhattanville reflected his high social standing as both an Irishman and a New York businessman. The censuses taken between 1850 and 1860 show that Devlin also employed primarily Irish immigrants. In 1854, Devlin and his New York-born wife Bridget adopted two girls from South Carolina: Margaret, aged 9, and Caroline aged 7.[36] The next year, the Devlins employed two Irish women and one New Yorker as domestic servants.[37] Their duties are not specified, but it can be safely assumed that one woman served as the cook, and the others took on various maid duties. One of these women was Ballinasloe native Anna Kelly who, after at least two years as Devlin’s employee, opened account 14259 with the EISB.[38] Her initial deposit of $50 suggests that she was able to amass some savings at the Devlin household before bringing her business to the bank.[39] Though by 1860, Kelly was no longer a resident of Craigmore, she was able to save the impressive sum of $336.82 by 1869.[40]

Just three blocks north of Devlin’s home resided Henry L. Hoguet and his family.[41] Like the other men discussed here, Hoguet was closely linked to the EISB and the wider New York Irish community. A Dubliner by birth, Hoguet emigrated to New York in 1834 where he began in the fur business and later entered auctioneering.[42] In 1865 he was made President of the Emigrant Industrial Savings Bank, a position he held until his death in 1890.[43] A look at Hoguet’s domestic servants over the course of 1850 to 1860 serves as perhaps the most conspicuous demonstration of the Irish elite’s dedication to their working-class countrymen and women. In 1850, Hoguet – still living on Bleecker Street in the 15th Ward at this time – employed one Mary Quinn. Five years later Mary Quinn was still employed and three other Quinns had entered service in Hoguet’s household: Margaret (aged 25), Michael (aged 25), and Catharine (age 19).[44] Although it is difficult to determine the true relationship between these four Quinns, it seems reasonable that they were somehow connected by blood. Hoguet’s employment of these family members became more certain in 1860, when Catherine Quinn’s widowed sister, Mary Nierney, and Mary’s daughter Catherine (aged 15), also became servants in the household, now in the 12th Ward.[45] Whether Mary Nierney was the same Mary Quinn who had worked for Hoguet in the 15th Ward is uncertain, but it seems unlikely given the age of her daughter. And yet, Hasia Diner has shown that married women did not always use their husbands’ names.[46] Nevertheless, while specifics remain the subject of speculation, what is clear is the Hoguet family’s dedication to the Quinns: in 1862 Henry L. Hoguet himself was added to Catherine Quinn’s EISB account.[47] Indeed, this is only one case of Hoguet employing family groups: in 1850 Mary Quinn worked alongside Ellen Edgerson (aged 50) and Ellen Edgerson (aged 17) – again, a difficult relationship to decode, perhaps mother and daughter, perhaps aunt and niece.[48] Likewise, in 1870 Hoguet employed Annie (aged 22) and Hanna Hogan (aged 21) at his home at 48 West 28th Street.[49] 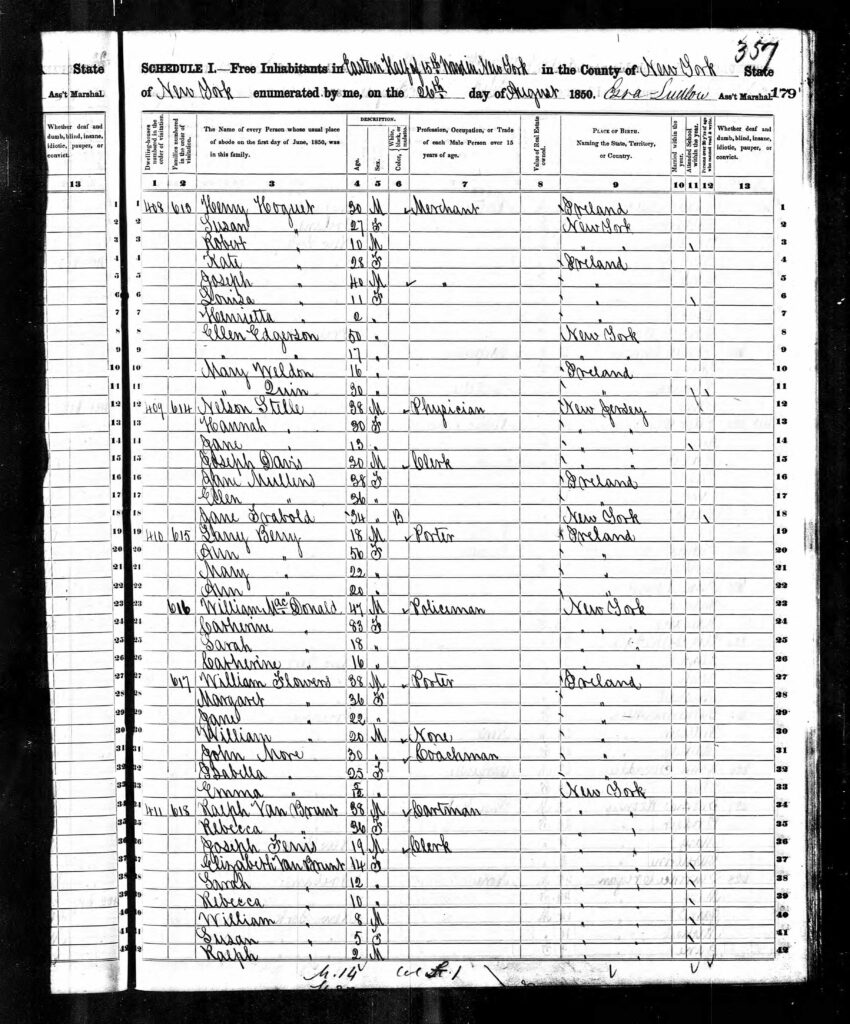 The 1850 United States Census record of the Hoguet Family (top of the page) including both Ellen Edgersons and Mary Quinn. Courtesy of Ancestry.com (Provo, UT, USA: Ancestry.com Operations, Inc., 2009).

Such intimacy refutes claims that the New York Irish elite were “an aristocracy aloof from the daily life of the great masses of immigrants.”[50] By looking at the servants of these wealthy men, patterns come to light that demonstrate one of the ways in which the upper-class Irish were deeply invested in their working-class counterparts. Indeed, the home was a space where the daily lives of both the elite and their servants were essentially linked and co-dependent. Though the grand displays of philanthropy and kinsmanship among the Irish elite of Manhattan are well documented, a study of the inner workings of their homes points to a more hidden, but just as important, demonstration of support for Irish workers.

[3] Charles Dawson Shanly, “Along the Hudson River at New York,” The Atlantic Monthly: A Magazine of Literature, Science, Art, and Politics, XXII, no. CXXIX (1868), 1.

[5] Andrew S. Dolkart, Morningside Heights: A History of Its Architecture and Development, 13. Charles Dawson Shanly, “Along the Hudson River at New York,” 2.

[6] Hopper Striker Mott, The New York of Yesterday: A Descriptive Narrative of Old Bloomingdale, Its Topographical Features, Its Early Families and Their Genealogies, Its Old Homesteads and Country-Seats, Its French Invasion, and Its War Experiences Considered in Their Relation to Its First Religious Society, the Bloomingdale Reformed Church, Organized in 1805. Incorporated in 1806 as the Church at Harsenville (New York: Putnam’s, 1908), 25.

[29]  Margaret Lynch-Brennan, The Irish Bridget, 93. Here, Lynch-Brennan notes that “board or food was not always such a great benefit for domestic servants” (94) as quarters were often cramped or non-existent (some maids slept in the kitchen) and their food could consist only of scraps from the family’s meals. In the wealthier households such as Carrigan’s, however, it seems more likely that servants’ meals would have been made specifically for them, if at a lesser quality than those for their employers.