Making a Living on Mott Street

This block of Mott Street was economically busy in the 1850s with according to the city directories.

The baker William Suydam worked out of No. 117 Mott from at least 1851 and in 1857 advertised for a “respectable” family for the apartment above the bakery for $25 a week. At the other end of the block, No. 138 Mott, 64 year old New Yorker Phebe Suydam also ran a bakery with her sons Charles and Frederick.  Their relationship to William is unclear.  Given the density of the neighborhood, it is certainly not hard to imagine the block sustaining these two bakers especially if it was ‘all in the family,’ as well as 7 grocers (mostly German), a butcher at No. 121 Mott and a milk supplier at No. 135 Mott in 1851. By 1856 some of the German groceries had been taken over by Irishmen like John Early at 130 Mott and Michael Dowd at 133 Mott. Grocer Edward Neilon at 134 Mott advertised for extra help in 1856.[1]

There was a feed store at No. 123 Mott from at least 1851;  in 1855 it was operated by James and Dennis McGurran, who also lived there. Although Wilson’s Business Directory of New York City lists feed with flour dealers, the McGurrans were likely supplying the many horses working in the neighborhood.  Tenant Margaret Parker, age 38, died as a result of an accidental fall down the stairs of this building in 1859.[2] 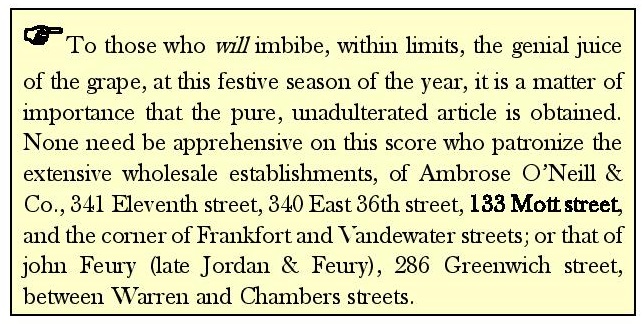 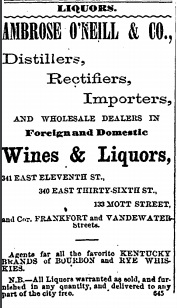 At least three establishments consistently sold alcohol on the block, among them Arthur McGuire’s at No. 135 Mott and Constantine Donoho’s at No. 137 Mott, which Charles Goulden ran in 1851, and Ambrose O’Neill’s wholesale operation at No. 133 Mott.[3]

Five residents of No. 127 Mott Street were saving money with Emigrant at various times during the 1850s.  Most of them were tailors, including two from the Isle of Man (John Cannon, acct no. 7656 and John Crane, acct. no. 9264) and Thomas Golden from Fenagh, Co. Leitrim (acct. no. 10815), who was married with four children at this address in 1856. 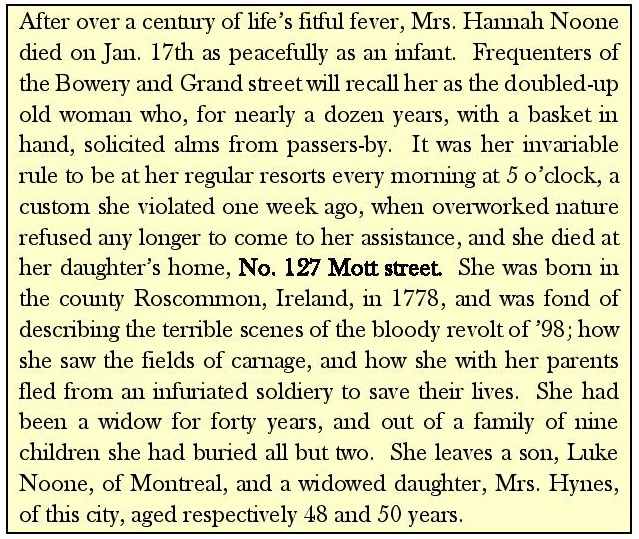 Frank Leslie’s Illustrated, 5 December 1885, depicted a local woman not dissimilar to the late Hannah Noone.

Among the professionals living on this block were Dr. Henry Slaven [or Slavin] and the lawyer Michael T. O’Brien, from Loughrea, Co. Galway.  No. 131 Mott was a brick house where two families lived in 1855; one of those was Irish native Dr. Slaven (age 55), his wife Mary, and their four children, ranging in age from 2 years to 26 years.  O’Brien lived at at No. 145 Mott and had account no. 10228 with Emigrant Savings Bank for four years in the late 1850s. [4]

The end of the block was occupied by the People’s Washing and Bathing Establishment , where the hairdresser Robert Oakey worked. [5]