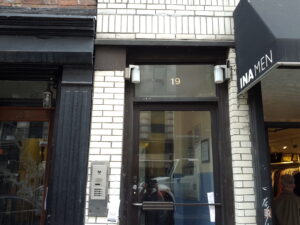 Ironically 19 Prince Street is home to a modern-day designer clothes store front that may have operated very much like the structure here in the 1850s.  By investigating the EISB Test Book records between 1850-1860, we find that 19 Prince StreetI was home to eight EISB account holders, each with a fascinating story.  Here we can also find solid evidence of clustering, or common immigrant settlement based on county of origin in Ireland, as well as data that suggests that this mini-community of Irish immigrants living and working at this address had actually formed a professional relationship – operating a full-service clothier at their place of residence – some even further cementing that relationship through marriage.

The first pair of EISB account holders at this address to identify are the Brannick Sisters, Catherine and Jane.  Both from Loughrea, County Galway, Catherine identified herself as a Dressmaker and Jane names herself a Shirtmaker.  They departed Dublin and arrived in New York City (by way of Montreal) in 1847, a peak year of famine emigration, on the ship Concord.  Interestingly, each of the Brannick sisters arrived unmarried and remained so at least until opening their EISB accounts in 1852, supporting the idea that skilled, unmarried women were thriving members of the Irish-emigrant community at the time.  (see Prince Street Savings tab)

Another group of EISB account holders at 19 Prince St and perhaps the longest-established (and most complex) of the entire study, the Laughlin family.  John Laughlin Sr arrived in New York in 1801 from Caltragh, Co Sligo, naming himself as a boot maker.  He lived at 19 Prince St with his wife Dorothy (also an account holder), three daughters, and one son.  By 1857, the year his account at EISB is opened, he is described as ‘infirm’.  His son John Laughlin Jr, also a boot maker, was born in the United States.  John Sr. and Dorothy Laughlin would have married in New York, as Dorothy arrived from Creevymore, Co Sligo into New York in 1816.  Upon John Sr’s death in July of 1858, Dorothy would maintain her residence at 19 Prince.  John Sr. and Dorothy’s daughter, Hannah Laughlin would, in fact, marry another resident of 19 Prince St, one Phillip Farley.

Farley, himself an EISB account holder, identifies as a Carpenter and arrived in New York in 1842 from Kingscourt, Co Cavan.  Outside of the growing immediate family of the Laughlins living at 19 Prince, there is the widower Thomas Scanlon and his two daughters.  Arriving in 1832 via Quebec from Sligo, Scanlon declares himself a box maker when opening his EISB account in 1859, marking his signature with an X.  Elsewhere in this mini-community that was 19 Prince could be found the (allegedly ‘bald’) laborer Michael Cunningham, from Mullagh, Co. Longford, with his wife and child.    Also, Joseph Hare, living alone at the address, was a Carter (parcel and package delivery) from Kilmore, Co Armagh.  In total, 8 individual EISB account holders and their families lived at 19 Prince Street with the following named professions:  Shirt Maker, Dress Maker, Carpenter, Packing Box Maker, Laborer, Carpenter, Boot Maker (several generations), and House Keeper.  Largely made up of immigrants from the Connacht counties, the evidence strongly suggests that these people had come together and formed (in some cases married into) a full-service clothier business, with packaging and delivery services available in house! 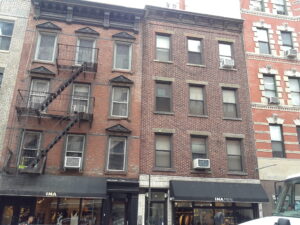