“During the afternoon, Judge Connolly and State Senator Bradley called on Governor Seymour and asked him to keep the troops out of the Eighteenth Ward. They argued that the peaceful middle class population of the area would be able to calm and control the rioters if they were left alone.  The governor agreed to their suggestion and gave them a letter to the Police Commissioners saying he hoped their request would be granted. But when Bradley and Connolly went over to police headquarters and showed Commissioner Acton the letter, he was violently indignant. “It can’t be done,” he barked at them. “The Eighteenth Ward is a plague-spot, and it must be wiped out.”

On the northwest corner, directly opposite the Union Steam Works, was 347 Second Avenue.  At street level, twenty-five year old James Reilly ran a liquor store; he advertised his business by the painted sign on the East 22nd Street side of the building.  In 1860, six of the seven households in Dwelling No. 679 were headed by men born in Ireland: in addition to Reilly, these were Charles Sheran, Peter Carey, Patrick Glancy, John Mathews, and John McDermott.  Trow’s 1863 Directory lists Carey, Mathews and Reilly still at this address.  Perhaps they were eyewitnesses to the “Battle in Second Avenue”? 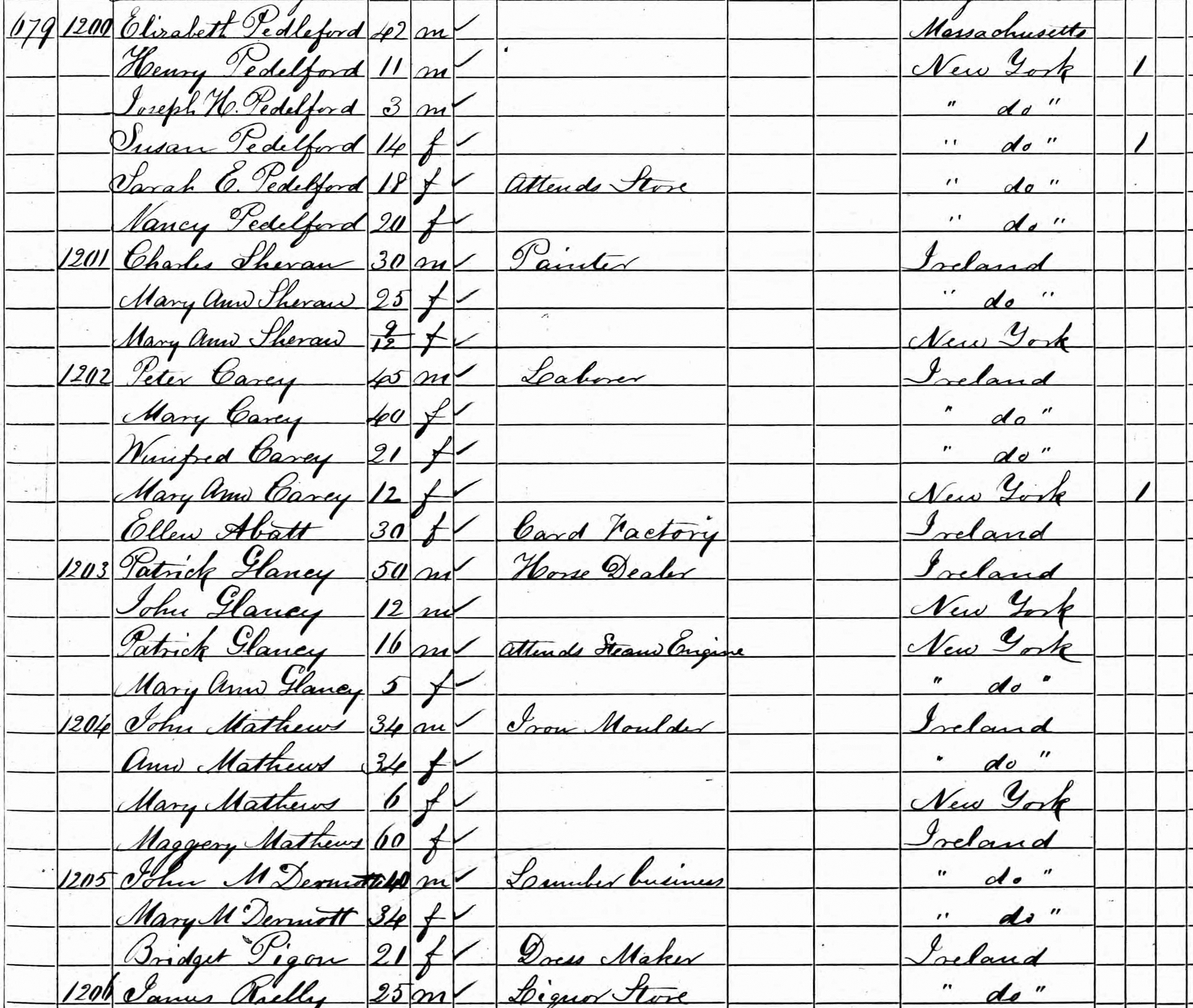 Peter Carey was married with two children; the family included a boarder, Ellen Abott, who may have worked in the card factory around the corner on East 23rd Street between Second and Third Avenues.

John McDermott might have operated the lumber yard on East 22nd Street, between Second and First Avenues, opposite the Union Steam Works.

Patrick Glancy, the horse dealer, could have been associated with the nearby United States Sale Stables which took up four lots on East 24th Street between Second and Third Avenues.

Eighteen year old Sarah Pedelford, who lived in the building with her widowed mother and four siblings, probably worked for James Reilly.

Sixteen year old Patrick Glancy could have worked across the street in the Union Steam Works and John Mathews could have worked in the Franklin Forge, a couple of blocks away on First Avenue between East 25th and East 26th Street. 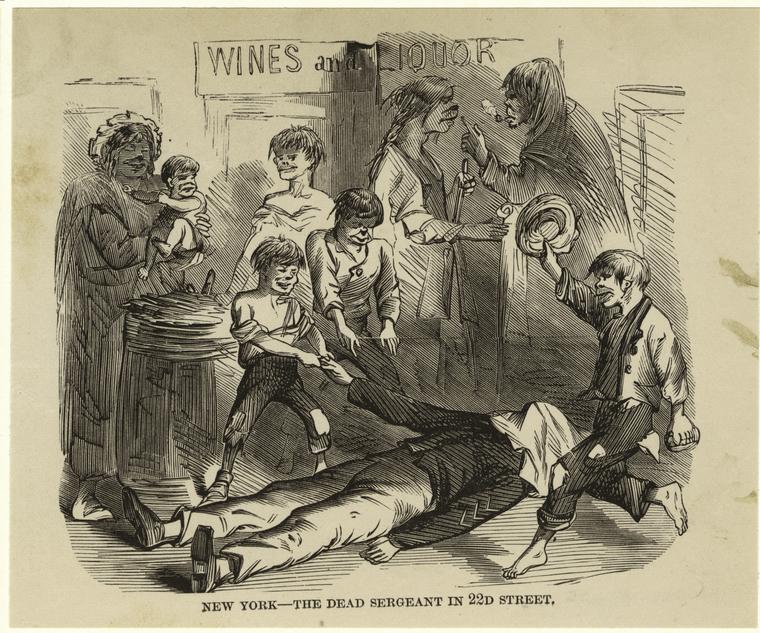 Might this image depict James Reilly’s store at No. 347 Second Avenue, NW corner of East 22nd Street? Or is it Patrick Fitzpatrick’s store at No. 346 Second Avenue, SE corner of East 22nd Street? It was first published in John Tyler Headley’s The Great Riots of New York, 1712-1873 and it illustrates the death of Charles Davids, Sergeant of the 13th New York Cavalry, who was shot and killed by rioters on East 22nd Street on day 4 of the Draft Riots, Thursday, July 16, 1863. While most depictions of the Draft Riots focus on racially motivated targets, white police and military were also victims of the mob. “New York — The Dead Sergeant In 22d Street.” NYPL Digital Collections ID 809557.

According to Trow’s directory for 1861-1862, Patrick Fitzpatrick, age 23, and his 21 year-old barkeep Thomas Harkin, also ran a liquor business at No. 346 Second Avenue.  This was diagonally opposite James Reilly’s establishment. In 1860 this address was home to Germans who gave their occupations as billiards, furrier, pianoforte maker, machinist, carpenter and dressmaker, as well as a Scottish mate, a gunmaker and a rangemaker from England, as well as men from Ireland like Patrick Enright, a 49 year-old stone polisher, William O’Neil, a 50 year-old pedlar, and William Bell, a 43 year-old sexton.   Bell was still living at this address in 1863 when, on Thursday, July 16th, Sergeant Davids ended his life on the sidewalk outside either Reilly’s or Fitzpatrick’s.  There are two accounts:

“About four o’clock, Colonel Thaddeus Mott, whose cavalry force was stationed in Gramercy Park, led eighty of his men on foot in a probe down East 22nd Street.  Between Second and Third Avenues, they ran into intense fire from rioters blocking the way and barricaded in houses on either side of the street.  Mott hastily ordered a retreat, which became a rout as the cavalrymen ran for dear life toward the safety of the park.  One man, Sergeant  Charles Davids, was killed and his body left lying in the street.” [1]

“A sergeant was knocked down by a brick-bat, and then seized and beaten to death.  The troops finding themselves unable to dislodge the assailants, retreated, leaving the body of the sergeant in the street, where it lay for three hours.”  Captain Putnam later returned to collect Sergeant Davids’ body. [2]