The Irish were landlords as well as renters in the Five Points.  An undertaker at Nos. 37 and 78 Mott Street well into the twentieth century, James Naughton emigrated from Ireland in 1865. He also operated stables from Nos. 31-37 Mott that kept horses for the funeral business as well as the police department.  [i]

It is likely that James Naughton bought the three story brick and frame building at No. 37 Mott Street from the estate of Dr. William T. Nealis in the 1870s.[ii]

Dr. William T. Nealis was the attending physician at the Tombs prison on Centre Street until 1873.  He resigned when the Commissioners of Charity and Correction substantially cut his salary from $3,000 to $800 per year.[iii] By then he was living at 220 West 39th Street in Holy Innocents parish and had become one of the Five Points’ absentee landlords.  Not only did he own No. 37 Mott Street but he had also inherited his childhood home at No. 65 Mulberry; in 1871 it was showing its age, with “unsafe chimneys, bulged and falling.”[iv]

The Nealis family presents a very interesting and very early example of return and re-migration.  They also illustrate the power of chain migration over multiple generations. Dr. Nealis’ grandparents were James and Ann McGunnigle Nealis.  James inherited a sizable estate from his father Patrick who had served with George Washington and who was compensated generously for property the British confiscated during the American revolution.  This money allowed James with his wife and children to return to Ireland in 1810, where he purchased a farm in his birthplace, the parish of Ahamlish, Co. Sligo.[v] 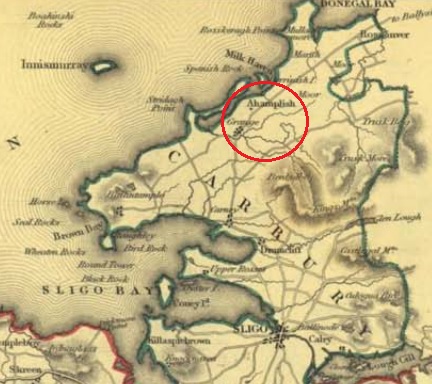 Grange was the prinipal village in the parish of Ahamplish [sic]. Detail, map of Co. Sligo made for Samuel Lewis’s Topographical Dictionary of Ireland (1837).

James Nealis’ son, William, returned to New York in 1822 when he was fourteen and put down deep roots in the Sixth Ward.  He became a policeman, married Catherine Meehan, and raised five children at No. 65 Mulberry Street.  That building was valued at $3,469 in 1866. When he died in 1870, the Irish American Weekly described him as “a kind, honest man, whose demise will be mourned by a large circle of friends.”  He left No. 87 Park Street to his daughter Mary Ann (Mrs. Michael Courtney) “in trust to receive the rents, income and profits thereof and out of the same to pay all taxes, assessments, insurance and repairs and the net balance above such charges to apply for the support and maintenance of my said daughter during the term of her natural life.” Nealis’ will was witnessed by the parish priest, Fr. Thomas Treanor, who lived at No. 30 Mott Street. [vi]

James Nealis’ son, James Jr., left Sligo in 1831 and settled in Brooklyn.  “In 1846, by lucky real estate speculation, he had become fairly well to do and left Navy Street to take up his home in Red Hook.  He lived for forty years where 168 Walcott Street is now known….[He] was an energetic business man, speculating in real estate principally, but always ready for a bargain.  He leaves a good sized fortune to be divided among his children and grandchildren.”[vii]

One of several accounts William Nealis had in the Emigrant Industrial Savings Bank was opened with $400 in 1857 for his son, who later became the neighborhood physician.[viii]   During the Civil War, Dr. William T. Nealis, enlisted in the fall of 1863 and was commissioned as an officer with Corcoran’s Legion (Company S, New York 182nd Infantry), under General Michael Corcoran, a native of Carrowkeel, Ballymote, Co. Sligo.  A year later, at age 24, Nealis was promoted to Full Surgeon.[ix]

Roster for the 182nd NY Infantry Regiment, Annual Report of the Adjutant-General of the State of New York, New York State Military Museum and Veterans Research Center at http://dmna.state.ny.us/historic/reghist/civil/infantry/182ndInf/182ndInfMain.htm

“Disease contracted while he was serving his country in the ranks of the Union Army” was said to be the cause of his premature death in 1875.  Dr. Nealis “was well known in the 6th and 14th Wards, where he grew up from boyhood,” wrote the Irish American Weekly, “and was universally esteemed wherever he was known.”[x]

When Dr. Nealis’ great-grandfather left Co. Sligo in the eighteenth century, little did he know the extent to which his decision to settle in New York City would determine the direction of future emigrants from Ahamlish.  During the Famine, another Nealis arrived from the parish courtesy of an assisted emigration scheme undertaken by Lord Palmerston.[xi]  Patrick Nealis took passage from Sligo for Canada on the Springhill in 1847, arriving in Quebec on 10 June.  Within a few years, he was in New York’s Five Points where the policeman William Nealis, Sr. had been living since the 1830s.  The exact relation between these two men is difficult to know for certain, as is confirming their townland of origin among the parish’s fifty-three; however, it does suggest that knowledge of Sligo men in New York City was circulating in pre-Famine  Ahamlish, where William lived from 1812-1827 and Patrick from 1813-1847.  The two widowed men were near neighbors on both Mulberry and Mott Streets in the 1860s, and both banked with Emigrant.[xii] 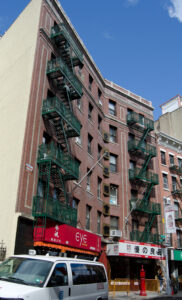 [xii] The stonecutter Patrick Nealis from Carrickglass, parish of Skreen, Co. Sligo lived on Greenwich Street and may also have been a distant relation.  Account Nos. 714, 1005, and 22689 New York Emigrant Savings Bank, Ancestry.com.