Prince Street corner of Mott Street, spring 2015. “Archbishop Bayley writes that in the year 1820, St. Patrick’s Cathedral in Mulberry Street [bordered by Prince Street to its south and Mott Street to its east] was so far in the fields and so surrounded by woods, that a fox was caught in the churchyard.” John M. Farley, History of St. Patrick’s Cathedral (NY: Society for the Propagation of the Faith, 1908), p. 50 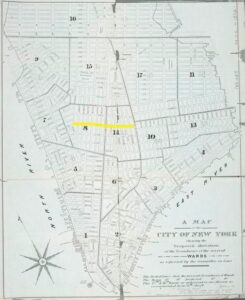 Prince Street in the 1850s was located in the heart of what is now referred to as the SoHo district of New York City, just south of New York University.  Running east to west for approximately 12 city blocks between the Bowery and McDougal Street, Prince Street sat comfortably across both the 8th and 14th Wards.

By the turn of the twentieth century, this area was the epicenter of one of the most densely populated ethnic melting pots in the world.  At the time in which our study takes place (1850s), the population of the 8th and 14th Wards could claim a population of 34,052 and 24,754 residents respectively. The percentage of Irish born among that population is estimated to be 21% (8th Ward) and 36% (14th Ward).  In fact, by 1855 nearly 60% of all residents of New York City’s 14th ward were of foreign birth. [1]  Combined with the American-born children of Irish parents, the Irish character of Prince Street in the 1850s would have been immediately perceptible.

With an average of 1 in 4 inhabitants of the 8th and 14th Wards in 1855 born in Ireland (and many more born to Irish parents), the unmistakably Irish character of these enclaves is clear.  By examining data mined from the EISB Test Book records, one can begin to gain a more refined insight into the physical and cultural environment of the world in which many of the account holders called home.  Nestled between Prince, Mott and Mulberry Streets in the center of NoLita (North of Little Italy), the original St. Patrick’s Cathedral still stands as a solemn reminder to all that this was once the center of organized Irish political power and cultural presence in New York city during the mid 19th century.  Within feet of the cathedral, at 42 Prince Street, the (in)famous Hibernian Hall Headquarters was a powder-keg of protest, organization, and activity among the New York City.  Smaller dwellings too – an aged Irish Printer’s shop, a full service clothier, and an apparently very Connaught-leaning boarding house – all made up the rich fabric that was this Irish Ethnic Village.  Again, the EISB Test Book records prove an invaluable source from which to delve into the personal histories of these dwellings and their very human inhabitants. 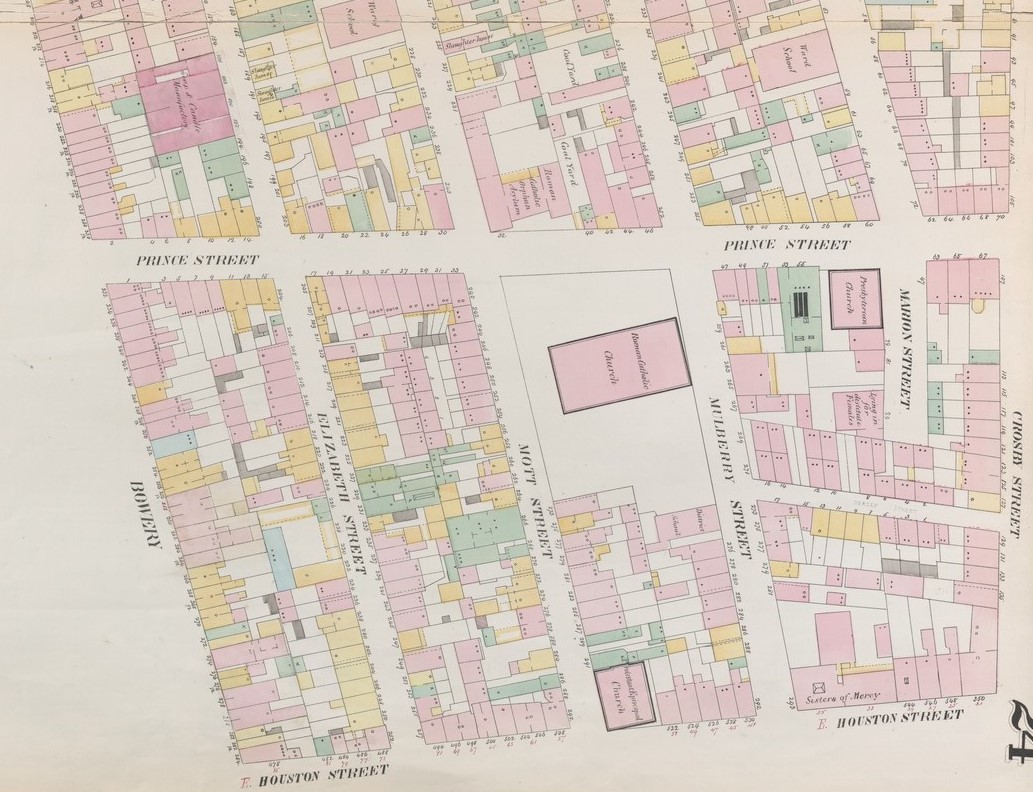 By analyzing the Fire Insurance Maps from the period, one can deduce that the majority of structures on Prince Street in the 1850s consisted of residential and mixed residential dwellings constructed of wood.  These mixed structures were most often a small storefront at ground level with apartments on the upper floors.  Looking at the first image (Fire Insurance Map Plate 24), one can quickly see that this section of Prince Street was dominated by the central location (both physically and culturally) of St. Patrick’s Cathedral.  Completed in 1815, the church and its surrounding grounds claimed an entire block of Prince Street between Mulberry and Mott Streets.  Located on this very block and crucial to this study, is Hibernian Hall at 42 Prince St, which was the veritable command center for much of the area’s Irish political and militant organization.

Contributors to this Spring 2015 project are Professor Marion R. Casey and Patrick Sweeney, a student in Glucksman Ireland House’s M.A. in Irish and Irish-American Studies program at New York University.