In the nineteenth century, this block was located in the Sixth Ward, close to Five Points.  Today, New York City considers 1-21 Mott Street as Block 164 and 2-38 Mott Street as Block 162.  This page presents a basic demographic and economic portrait of this portion of Mott Street, from its base at the intersection of Worth Street and Chatham Square north to Pell Street. 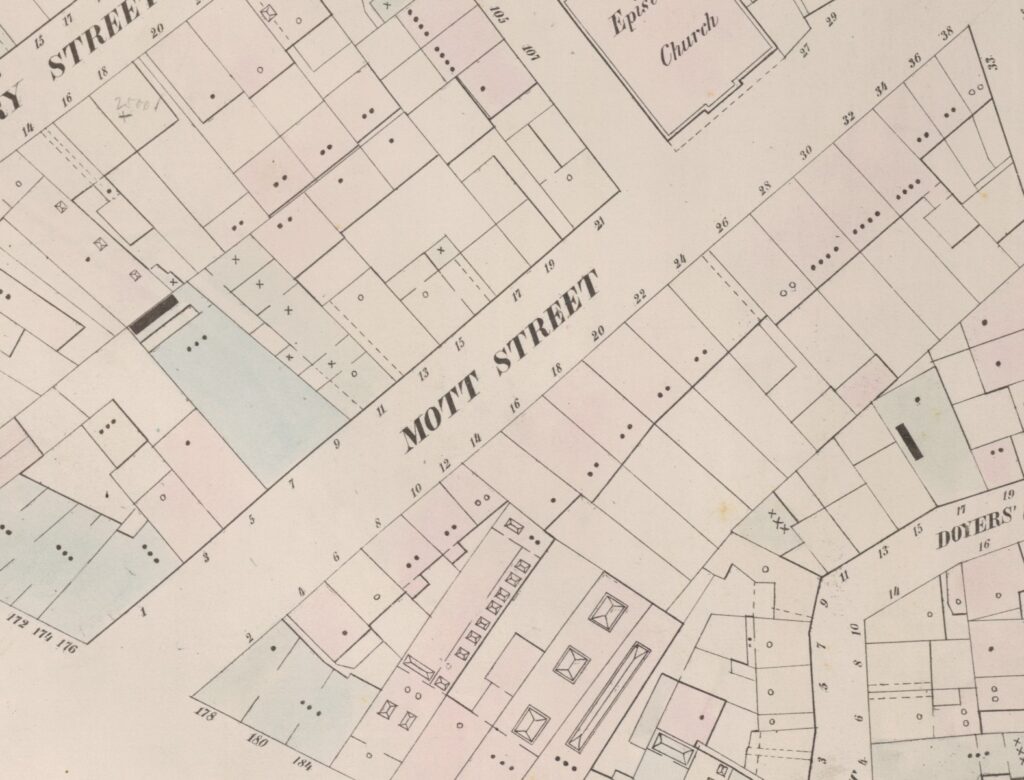 Between 1852 and 1866, there was consistency in the use of commercial space on these blocks. The left-hand side storefronts along Mott Street included two groceries, a bakery, and a porter house mid-block; on the right-hand side, numbers 14, 16, and 18 housed a variety of small businesses.

In the summer of 1864, fire swept through the district and the report of damages reveals the relationship between absentee owners and their tenants on this stretch of the street.  Mrs. Ann Burrell of Twelfth Street claimed $1,200 in damage to her property at No. 28 Mott Street.[i]  She was the widow of Marmaduke A. Burrell, the doctor who worked in the neighborhood until his death in November 1846.  After Mrs. Burrell moved uptown, she rented the premises to Dr. James Sweeney, who was also the Treasurer of the Transfiguration Church School Aid Association.[ii]  His brothers Hugh and Owen were physicians a few blocks north at 183 Mulberry Street.  Described as “eloquent and happy,” Hugh Sweeny was active with the Irish American Physicians of New York and Brooklyn and the Roman Catholic Half-Orphan Society.[iii]  By 1884 the doctor resident at No. 28 was Stephen Ten Eyck.[iv]

Bridget Costello’s pawn shop at No. 16 Mott sustained $300 worth in the same fire.  She was insured for $3,000 and the brick building, owned by a Mr. Raynor, was also fully insured.  Mr. Merriam owned No. 26.  It was damaged too, as was most of the property of his tenant, Samuel Hyam, who ran a boarding house in the building.[v]

No. 3 Mott Street was operated as a grocery by Mathew Hohn in the 1850s; his wife Ellen was from London and opened an account with the Emigrant Savings Bank in 1854 after nine years in the United States. Together they were raising a daughter Christina as well as Ellen’s daughter Mary Jane Burke. Jacob Schwarting took over the grocery in the 1860s. Air pumps and water pressure equipment for lager beer were also being sold by Haensel and Lehmann from this address when it was purchased as an investment property in 1876 by Edward Fellows.  He was president of the Rutger’s Insurance Co. around the corner at 180 Chatham Square and lived in Woodstock, Westchester County.[vi] 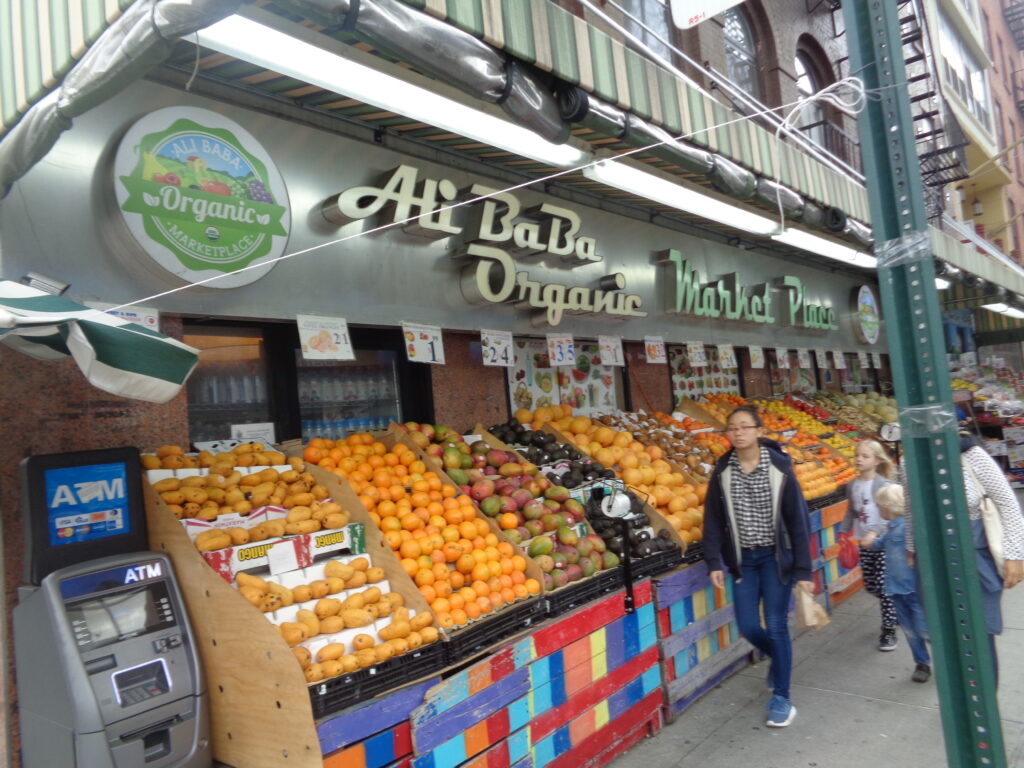 For nearly two hundred years there has been an ethnic grocery on the corner of Mott Street and Chatham Square. The Ali Baba Organic Marketplace extends from No. 1 through the old site of No. 3 Mott Street (2017).

At different points during this period, the apartments above the storefront at No. 24 Mott Street were home to Patrick O’Brien, a huckster from Templeboy, Co. Sligo; Patrick Sullivan, an upholster from Tuosist, Co. Kerry; Patrick McKenna, a carter; and the teacher Miss Mary Osborne.  All banked with Emigrant Savings Bank.  In 1867 D. Klein was a Jewish mohel at No. 24 Mott; in the City Directories for the 1870s, Patrick Pentony was listed as a “segar maker” at this address.

Ethnic succession was swift on this block.  In the early 1850s, the baker Melancthon Palmer appears to be the sole native-born American in business among many Irish immigrants; by the end of the decade, some of the storefronts had passed into German hands.

No. 13 Mott was the Irish Volunteer House in the early 1850s, a bar where some of the local Irish voluntary militia companies assembled for practice.  Later, J.F.C. Muller operated a grocery at that address from at least 1856-1866. 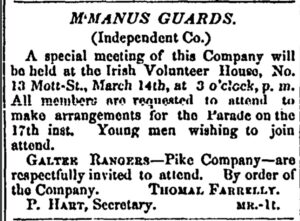 In the 1840s, No. 14 Mott was the home of Five Points liquor dealer William Lyons.  This four-story and basement brick building subsequently became the location of Frederick Kahn’s milk and butter shop in the 1850s, then Moritz Coster sold eyeglasses from that address, followed by John Mack’s wine and liquor store in the 1860s.  In April 1892 the building was put on the market.  Only a few months later this address made headlines with a suspected case of cholera: the death of Hop Jo Wah was deemed suspicious by the German doctors who inspected and disinfected the premises, “closed a restaurant in operation in the building, and quarantined the two Chinamen who were with the dead man.” This might be why No. 14 Mott was not sold until 1894.  The new owner, James Naughton, paid $21,000 for the building and then put $10,000 worth of renovations into the property. [vii] 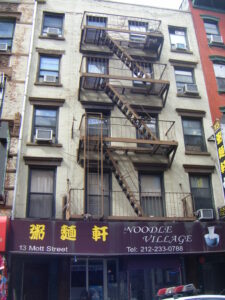 In 1898 Ung Sic died across the street at No. 13 Mott.  One of the first residents of what became New York’s Chinatown, he had arrived from San Francisco in 1872.[viii]  When Ah Foon, one of the wealthiest residents of the neighborhood, died in 1926, Naughtons handled his massive funeral from the store of Wing On Wo.  “James Naughton, undertaker,” the New York Times reported, “had decked the room in 13 Mott with purple and silver and brought Huey Kim, a Baptist divine, from White Plains to deliver the funeral oration.”[ix]  Naughton’s connections with the Chinese community went back more than thirty years, when he posted $500 bail each for four young men captured by police after they were smuggled into the United States from China by Mock Dock of 32 Mott Street.[x]