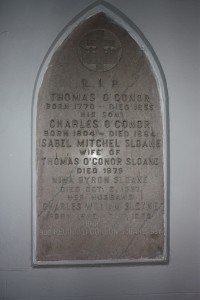 Thomas O’Connor (sic) was a native of Mount Allen, County Roscommon, Ireland. He was the grandson of Charles O’Conor of Bellanagare, Irish antiquarian, Catholic rights advocate, and descendent of the kings of Connaught. Thomas joined the United Irishmen in 1791. Disillusioned with the abortive rising of 1798, he left Ireland for the United States in 1801.He invested in 4,000 acres of land in upstate New York. The investment failed, and indebted, he returned to New York City in 1810. Pursued by creditors and spending some time in a debtors’ prison, he eked out a living as a journalist and writer.[2]  In 1812 he founded War, a weekly paper dedicated to the British American War of 1812. His editorial slant was in support of the newly independent America and in portraying the role played by Irish-Americans[3]. Later he edited his most successful paper, The Shamrock or Hibernian Chronicle, the first Irish-American newspaper, which had been founded in 1810 by John Gillespie[4]. Thomas’ son Charles, as a young boy, was a distributor of both newspapers.[5] 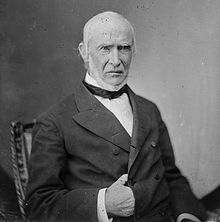 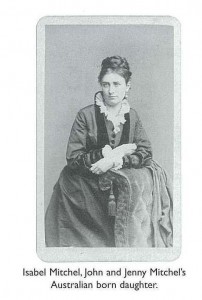 Charles O’Connor (sic) was born on January 22, 1804, at 125 Front Street, New York City. About the 1840’s he changed the spelling of his name to an older form, that of his great-grandfather, Charles O’Conor of Bellanagare.[6] He grew up poor but was well schooled in the Classics, English and French by his father. The New York Times tells us that he entered the office of Henry W. Standard at the age of 12.[7] He was too poor to purchase the necessary law books, but Mr. George Pardoe assisted him – help that O’Conor never forgot.[8] He was admitted to the New York Bar in 1824 at the age of 20.[9]

In 1827 O’Conor was successful as counsel in the case of a contested election for trustees of Saint Peter’s Roman Catholic Church on Barclay Street in New York City. His opposing counsel was Thomas Addis Emmet. He was the elder brother of the executed Irish patriot, Robert Emmet, and he had fled Ireland because of his involvement in the insurrection of 1798.[10] This case brought O’Conor most of his cases in his earlier years from Catholics.[11]

In 1850 he represented Mrs. Catherine Forrest in her divorce case against her husband, Edwin Forrest, a famous actor, who the previous year had been at the center of the Astor Place Riots, which had escalated from a spat between Forrest and the British actor William Macready.[12] O’Conor succeeded in getting a large alimony settlement for Catherine Forrest. John Van Buren represented Edwin Forrest. The case greatly enhanced O’Conor’s reputation and extended his clientele. Thirty women of New York City presented him with a silver vase for his successful pleading of the case. Sixty members of the bar presented him with another vase. In 1869 O’Conor was elected president of the New York Law Institute. Later, he gifted the vases and the bound volumes of his opinions and cases to the Law Institute.[13]

In 1856 he was defeated in the Lemmon slave case by William Evarts. O’Conor defended the right of slave owners to transport their slaves through free states.[14] In 1865 he became senior counsel for Jefferson Davis in his indictment for treason.[15]  According to his friend and admirer, Chief Justice Daly, O’Conor developed a hatred for war when, in 1813, a family acquaintance, General Zebulon Pike, was killed in the British American War. This gave O’Conor a hatred of war. He was opposed to war with the South.[16] In this, O’Conor’s actions were aligned with Democratic Party thinking of his day (more precisely with the more conservative faction of the party), and O’Conor remained a committed Democrat all his life.[17]

However, being a Democrat did not impinge on his taking action against abuse of power. In 1871 he took on the role as counsel for the State of New York in its proceedings against William (‘Boss’) Tweed and others accused of fraud against New York City.[18]  Despite his success as a lawyer, O’Conor had little success as a politician.

In 1848 O’Conor was Democratic candidate for Lieutenant-Governor of the State of New York on the Democratic-Old-Hunker ticket. The Democratic vote was split between the Old Hunker and the Barnburner/Free Soil factions.  They were defeated by Hamilton Fish and George Washington Patterson on the Whig ticket.[19] Had the Democrats not split they would have likely won the election. However, the Democrats rewarded O’Conor on September 4, 1872, at the Democratic Convention, when “the Convention proceeded to elect O’Conor and John Quincy Adams (II) as the standard bearers’ of the ‘Straight-out Democracy” for President and Vice President of the United States. O’Conor declined the nomination, but his name went forward.[20] In any event, Ulysses Grant, the incumbent Republican President, easily won the election. It is notable though that O’Conor was the first Catholic nominated in a Presidential election. O’Conor’s temperament does not seem to have been suited to that of a politician. According to Judge Daly, “he was a man of fits and moods, sometimes very communicative, at others chillingly repellant.”[21] However, O’Conor was ever loyal to Ireland.

In 1848 he joined the Directory of Friends of Ireland, organized in anticipation of a rising there. At this time Thomas O’Connor was still alive and no doubt encouraged his son Charles to join. In August of that year Charles also presided at a great patriotic meeting at the Vauxhall Gardens, New York, which was addressed by Bishop John Hughes.[22] O’Conor and Hughes were to become friends and founding members of the Emigrant Industrial Savings Bank. The bank was founded to give Irish emigrants a safe place for their savings as well as a means of sending money to support their relatives in Ireland and to finance those who wanted to emigrate to the Untied States.[23] He was a benefactor of the ‘new’ Saint Patrick’s Cathedral with a subscription of $1,000.[24] He was noted as a generous and unostentatious giver to charities especially to Catholic charities.[25]  But O’Conor’s giving was not confined to charities.

In 1852 Charles O’Conor, Felix Ingoldsby, and Robert Emmet opened a trust account at the Emigrant Industrial Savings Bank for the purpose of erecting a monument to the memory of Dr. William McNeven. The initial deposit was $928.71. They let the account accumulate interest until 1865, when, with the miracle of compound interest, they were able to withdraw $1,500 for the construction of the monument in St. Paul’s Churchyard in lower Manhattan.[26] McNeven, a Catholic from Galway, was a United Irishman who had fled to France after the disastrous insurrection of 1798 but opted for New York in 1805. He was a very successful doctor and Professor of Chemistry at the New York College of Physicians and Surgeons (Columbia University). Later, he was the Chair of Materia Medica in Rutgers Medical College.[27] 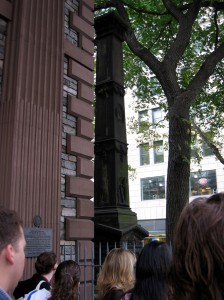 He is known as the “father of American Chemistry” and is buried on the Riker Farm in Astoria, Queens.[28] 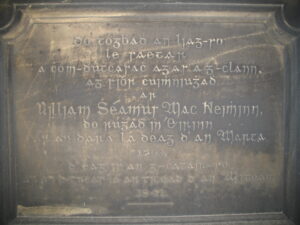 It is notable that although McNeven and O’Conor were both Catholics, St. Paul’s Episcopal Churchyard was the chosen site of the McNeven monument. Thomas Addis Emmet, fellow comrade in arms and New York immigrant, also has a monument in St. Paul’s Churchyard. 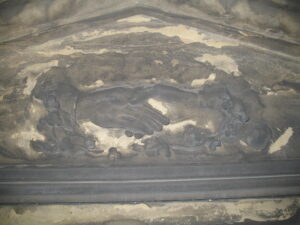 Reporting O’Conor’s funeral on May 17, 1884, The New York Times noted: “St. Patrick’s Cathedral in Fifth Avenue was packed yesterday morning with as distinguished a congregation as was ever gathered within its walls, Judges, lawyers, clergymen, bankers and merchants being closely wedged together, while a great number of ladies gave variety to the assemblage, which had come together to listen to the solemn Pontifical mass over the body of the late Charles O’Conor.”[29]  Those of the legal profession attending included: Chief Justice Charles P. Daly, Judge John Brady, ex-judge Charles A. Peabody, James C. Carter, and Francis Barlow. The Catholic Church was well represented with Archbishop Corrigan, New York, (Archbishop Hughes had died in 1864), Bishop Wigger, Newark; Bishop Hendricks, Providence; Bishop McNeirney, Albany; Bishop McQuade, Rochester; and numerous other clergy. Irish names are notable among the lawyers and clergy. O’Conor’s immediate family was represented by his sister, Mrs. Eliza Sloane, her sons Charles William Sloane and Thomas O’Conor Sloane.[30] Charles O’Conor had married in 1854 but had no children. His wife Cornelia (Livingston) McCracken predeceased him in 1874.[31]  She was the daughter of Francis A. Livingston, lawyer of Rhinebeck, New York, and an Episcopalian.[32] She was not interred with Charles O’Conor. The marriage was not a happy one. The New York Times tells us that “His marriage was unfortunate, the difference in temperament between him and his wife making it impossible for them to live happily together. They consequently agreed to separate and never again held any communication.”[33]

The 1880 census shows Charles O’Conor living at Fort Washington Depot Road (the present Manhattan side of the George Washington Bridge). The household included his sister Eliza Sloane, her husband, Christian Sloane, a retired merchant; their two sons Charles William Sloane, unmarried and a lawyer, and Thomas O’Conor Sloane, a widower; and Thomas’ one year old son, Thomas junior. Isabel Mitchel Sloane, Thomas O’Conor Sloane’s wife, is named on the family vault as having died in 1879. She may have died giving birth to Thomas Sloane junior. Isabel Mitchel Sloane was the daughter of John Mitchel, the Irish patriot.[34] The household also included Julia Mullany, a 22 years old niece of the Sloane’s,[35] and four female servants. The servants were all Irish born.[36]  In 1881 Charles O’Conor retired to Nantucket and died there three years later.[37]

Catholic Irish New York was at this time on the ascent. The Irish were integrating into New York society and climbing its highest ranks and the new cathedral (completed only five years before O’Conor’s funeral) was the physical embodiment of this rise. However, O’Conor specified in his last wishes that he be buried in the family vault in Old St. Patrick’s cathedral in Mott Street.[38] His father Thomas was already there as was his nephew’s wife, Isabel Mitchel Sloane. Catholic Irish New York might be moving on, but O’Conor always had an affinity for the past and his heritage.

[8] Catalogue of the Law Library of the late Charles O’Conor, to be sold by auction … March 13 and 14 1885 (original catalogue at the New York Public Library); see also Charles O’Conor’s life – an Obituary paper read by Chief Justice Daly Before the New York Historical Society, March 4, 1885.

[13] New York Law Institute, http://www.nyli.org/Blog/BlogDetails/tabid/124/ArticleId/199/Charles-OConor.aspx, accessed May 6, 2014. See also Appendix 1 for picture of one of the vases.

[24] John M. Farley DD, History of St. Patrick’s Cathedral, Society for the Propagation of the Faith, Archdiocese of New York, 1908, 326 (although the subscription list misspells his name as Charles O’Connor)