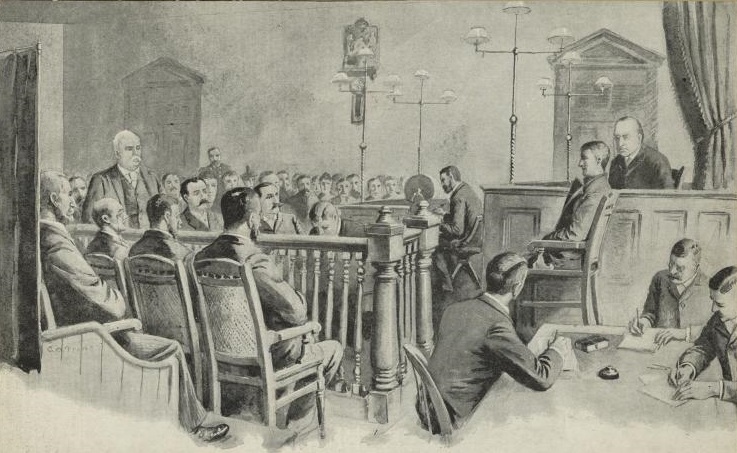 Two judges tried 60 of the 85 cases involving the Irish-born men in Sing Sing in 1870.  These were John K. Hackett and Gunning S. Bedford. 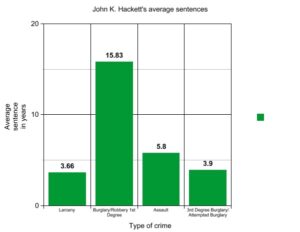 Bedford sentenced people very similarly to Hackett [“Other” on the charts indicates two cases for Forgery and Arson].  First degree Robbery/Burglary cases got, on average, 10 more years of jail time than Assault crimes. There was also a distinction made in assault cases.  The punishment for “Assault with a deadly weapon” never exceeded 5 years. However, if the case was classified as “Assault with intent to kill”, those cases generally got closer to 10 years. 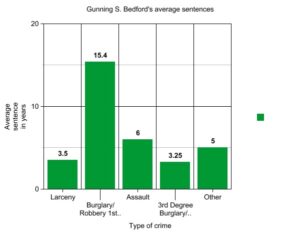 Whether or not the criminal confessed did not seem to factor much into sentencing. Those who confessed got higher sentences just as often as those who didn’t confess. The most noticeable takeaway of Hackett and Bedford’s sentencing trends was the focus on fighting robbery/burglary, as they both sentenced those crimes heavily, probably following state statutes.

John K. Hackett was born in 1821, in Utica, New York. He graduated from New York University in 1837 and was admitted to the bar in 1842.  He came from a prominent family, as both his father and his brother were well-known actors. Outside of his political career, Hackett was known as a sportsman, and one of the best shots in New York. He was also a talented guitar player and singer.[1] He lived briefly in San Francisco from 1849-1857, but otherwise in New York where he became a prominent figure in local politics. Hackett was appointed assistant Corporation Counsel under John E. Develin in 1863 and “in this capacity he gained considerable reputation for his arguments in important cases.” He was elected secretary of Mozart Hall, an anti-Tammany Hall political group. He remained in this position until 1866, when he was elected Recorder of the City, after the previous Recorder, John T. Hoffman, was elected Mayor. He remained in the Recorder position up until his death in 1879.[2] After John Kelly took over for William Tweed as boss of Tammany Hall, there were problems. Kelly and Hackett didn’t like each other, one reason being that in 1862, Hackett strongly contested Kelly’s claim to $20,000 in sheriff’s fees. When Hackett was up for re-election again in 1875, this time for a 14-year term, Kelly did not put him on the Tammany ticket, instead choosing Frederick Smyth. Hackett ran on the Republican ticket instead, and won quite easily.[3] Unfortunately, he did not get to serve much of that term, as he died due to illness in December 1879. He was succeeded by his former opponent, Frederick Smyth. Hackett is remembered as a successful New York politician, who helped fight Tammany Hall corruption throughout his career and served as a well-respected judge.

Gunning S. Bedford was the son of a famous early American obstetrician, Dr. Gunning S. Bedford (1806-1870), a Catholic from the South. [4]  He graduated from Columbia, then went to Harvard for his law degree and was admitted to the bar in 1859.  In the 1860s he became the junior partner of James T. Brady, “the great criminal lawyer and leader of the New York bar.”  Bedford became Assistant District Attorney in 1865 and “was instrumental in bringing to judgment several noted criminals.”  In 1869 he was nominated for City Judge and won by 70,000 votes.  According to the New York Times, “he was very strict with criminals,” especially medical malpractitioners, for which zeal he was commended in 1871 by the New York Academy of Medicine.  On his deathbed, Judge Bedford received Holy Communion from Archbishop Corrigan and he was buried from St. Patrick’s Cathedral.   His fellow judges in the Court of General Sessions said this of Bedford, “He endeared himself by his personal attractions and grace.  He was noticable for his loyalty, for his conscientious sense of public duty, and for the fairness with which he conducted public prosecutions.”[5]