The majority of ‘Information Wanted’ ads placed in the Truth Teller were for men (83% of the ads were looking for men versus only 17% for women). But an analysis by gender reveals strikingly different patterns.  While it has long been known that Irish men emigrated at higher rates than Irish women in the early nineteenth century, the Truth Teller ads indicate that the emigration of women was more consistent and more widespread than that of men before the Famine. 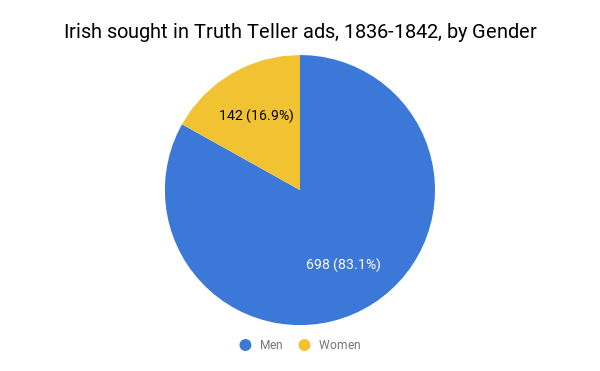 In 713 of 840 ads studied, a place of origin was specifically named. This appears to have been key information for finding people from home, regardless of gender since  82% of ads for women and 85% of those for men listed a county in Ireland.  Emigration trends thus reveal that while the majority of men clearly came from Leinster and Munster, women tended to have far more even provincial origins. Of the 116 ads from women naming a county of origin in Ireland, Cork and Sligo far surpassed all others.  Sligo only accounts for 24 of the 713 ads naming a county but a surprisingly high 54% of those are for women.  Why remains an unanswered question.  In contrast, Cork dominates with 95 ads yet the 18 women from this county only account for 19% of the Cork total.  The second highest county total for all ads comes from Limerick with 51 but, here again, there is a clear gender distinction since women make up only 9% of its emigrants according to the Truth Teller sample.

Leaving aside the Cork and Sligo spikes in female origin, Irish women appear to emigrate is similar numbers from all other counties in this period, with the notable absence of three in Ulster (Antrim, Armagh, Fermanagh) and one in Leinster (Wicklow). 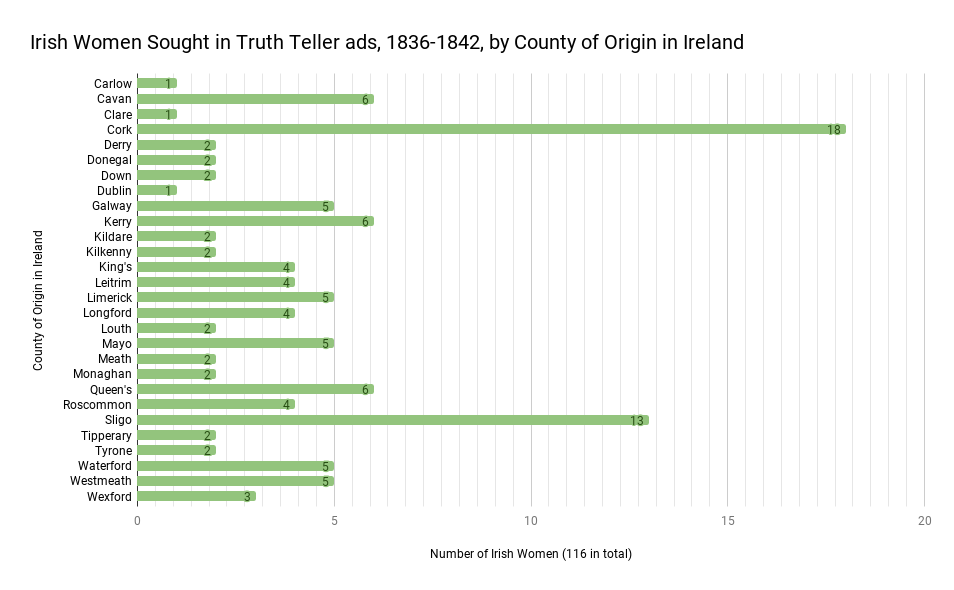 When the year the ad was placed — or, in other words, the year in which information on 142 Irish women in America was sought by family or friends — is broken down by gender, another distinct difference emerges.  If we posit that the year of publication roughly correlates to the chain migration trends in emigration during the 1820s and 1830s, then women left Ireland at a relatively even rate when compared to men whose pattern has more distinct highs and lows.  1841 seems to be the one year in which it can be said that male and female emigration from Ireland had an uptick. 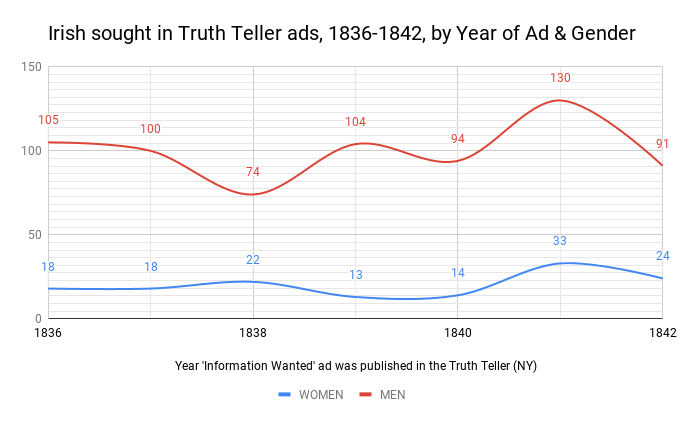