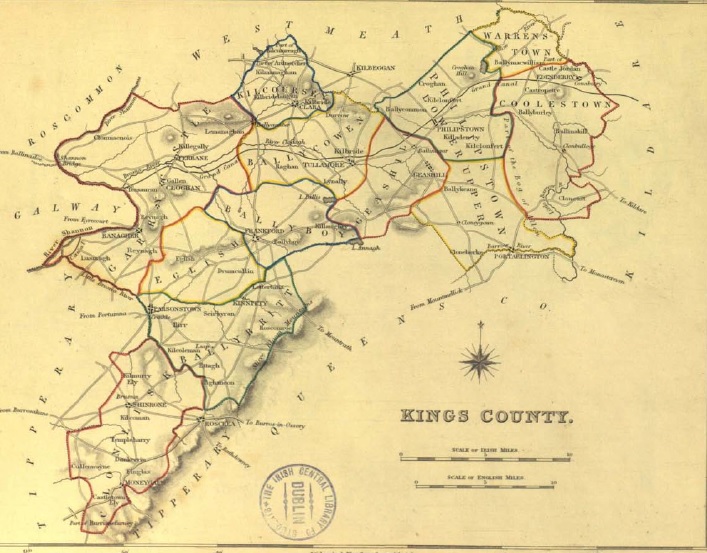 Though there are some good farmsteads, the landholders in general pay but little attention to the arrangement of their offices or their internal convenience or neatness, except in those belonging to gentlemen of fortune. The houses of the small farmers are very mean, and the peasants’ cabins are throughout miserably poor, in few instances weather-proof, and mostly thatched with straw; on the borders of the bogs they are still worse constructed, being covered only with sods pared off the surface, called scraws, or with rushes; yet the people are said to prefer the shelter thus afforded to that of stone and slated houses, partly from custom, partly, too, on account of the warmth retained by the smoke and closeness of the earthen buildings. The food is potatoes, milk, and oatmeal. In the neighbourhood of Philipstown, bacon forms an occasional addition to the family fare, and beer is in much demand. In Kilcoursey, most collier families consume a bacon pig annually. Though illiterate, they are very anxious to have their children instructed, as is evident from the number of small schools in all parts. They speak English everywhere; if a person is heard speaking Irish, they invariably call him a Connaught man. Their clothing is of the coarsest materials, manufactured at home. The women prepare the yarn for the manufacturer, and execute many of the details of agricultural industry. The use of cotton in lieu of linen and woollen has become very general, particularly for female dress….The women are peculiarly industrious; they are all spinners, and their auxiliary exertions for the subsistence of the family are so proverbial, that it is common for an industrious young man to take a journey into this county in quest of a wife.  [2]

On the eve of the Great Famine, the population of King’s County was 148,125 with a large concentration in the western barony of Garrycastle. Eighty-two percent of the seventeen King’s County natives who lived in Manhattan’s Twelfth Ward when they opened accounts with the Emigrant Industrial Savings Bank between 1850 and 1860 were from Garrycastle. The remaining eighteen percent were from the neighboring barony of Ballybritt, which included Parsonstown (now Birr).

Strawberry Hill House was located less than a mile from the village of Cloghan in the townland of Drishoge. It was was a Gothic Revival country house built in 1810 as an addition to a 16th century monastery.  There is Irish folktale associated with this house. Image Source: Google Earth (2020)

Siblings Margaret and Patrick Whelan (EISB account 20234) would have walked along Ferbane Street on their way to the national school in Cloghan. The village’s thatched and “neatly whitewashed cottages” were remarked upon by Samuel Lewis in 1837.  But the village also included some more substantial dwellings that date to a building boom in the 1820s.

Another cluster of Garrycastle emigrants came from parishes just east of Lusmagh. Martin Larkin was from Banagher; Mary Silk was from Gallen; Patrick, Margaret and Mary Whelan were from Cloghan; and the Moystown natives were Mary Larkin, Thomas Melia, and John Doolan.[5] Image source: Google Earth (2020).

The majority of these immigrants from King’s County settled in the northern village of Manhattanville.