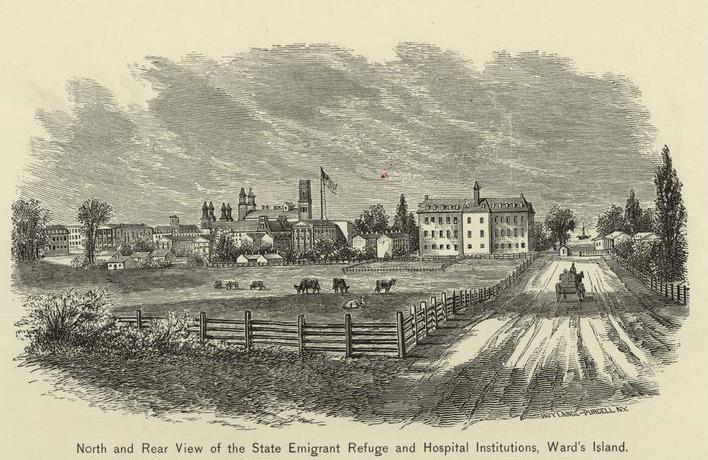 The Irish worked in a variety of capacities in the Ward’s Island facilities. For example, in 1855 there were 36 occupations in the Medical Department filled by 64 Irish men and 2 Irish women. 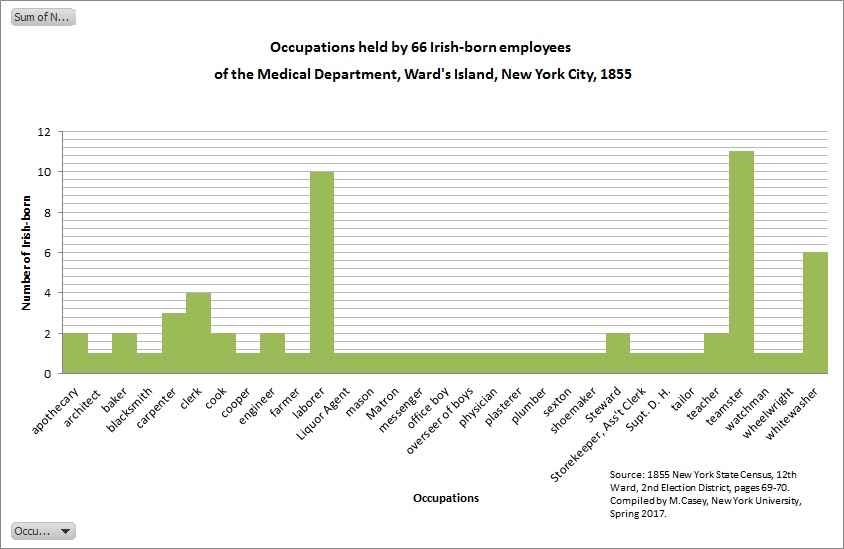 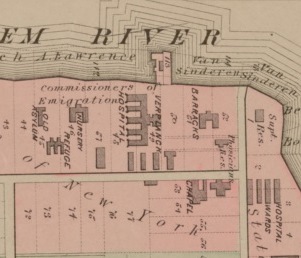 Barbara Brown was a Matron and Matilda Kerrins, along with her husband George, were both teachers on the island.

There were 11 teamsters, 10 laborers, and 6 whitewashers from Ireland.

Some of these employees had accounts with the Emigrant Industrial Savings Bank.

The Superintendent of the Dining Hall was Hugh Kelly, age 46.  He was from Lisburn, County Antrim and arrived in New York on 4 May 1847 per ship Massachusetts from Belfast.  Kelly opened his first bank account in the fall of 1851; eventually he would have 3 accounts.

William Healey, a baker, was from Granard, Co. Longford. He was married to Honora Flannery who also lived on Ward’s Island.  They were both age 33 and the parents of one child, Rose.  Healey had been in New York nearly seven years, having travelled from Liverpool on the Fanchion which arrived 28 September 1848.

The island’s shoemaker and tailor were also saving with Emigrant.  Samuel Coffey had been born in Inch, County Down in 1807 and learned his shoe-making skills there before taking ship from Belfast in the spring of 1847[?]. Samuel opened an account at Emigrant Industrial Savings Bank on January 28, 1858. He was the primary owner of the account and Owen McCormick was the secondary owner. The two men were co-workers on Ward’s Island but any further connection is unknown, as is the reason why McCormick was named joint owner on Coffey’s Emigrant account. The account was opened with $200.00 (approximately $5,660.00 current USD value).[1] Less than four months later, the account was closed out and the entire balance of $200.00 was withdrawn on April 12, 1858. Owen McCormick was a 22 year old tailor from Hillstreet, County Roscommon.  He sailed on the William Nelson from Liverpool and arrived in New York in the autumn of 1853. Owen opened his account at Emigrant on September 12, 1855, with an opening deposit of $100.00 (approximately $2,830.00 current USD value). He closed the account later that year and withdrew $169.33 as his closing balance (approximately $4,790.00 current USD value). [2] During the years of 1857 and 1858, per the New York City Directory, Owen relocated to 35 West 13th Street in Manhattan.[3] The 1860 U.S. Census placed 30 year old Owen McCormick, tailor, in New York Ward 8, district 3, unmarried with no dependents, but was part of a nine person census household.[4]

A young man from Dublin, 22 year old Edward Canavan, was one of two Irish-born apothecaries on the island.  Canavan opened a savings account in 1853, four years after arriving in the city.