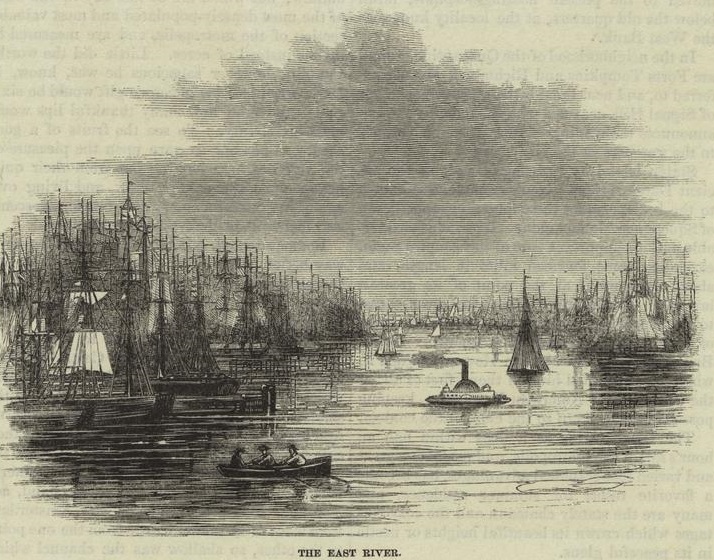 Built in 1850 with a tonnage of 1162, the Constantine was soon among the larger packet ships regularly sailing between Liverpool and New York for Grinnell, Minturn’s Fourth or Swallowtail Line.[1]  Its sister ship was The Queen of the West; both typically carried about 600 men, women and children when crossing the Atlantic. [2]

The captain of the Constantine, Richard L. Bunting, was born in New Jersey in 1816.[3]  According to his will, he was a “master mariner” who owned all or part of several ships.[4]  He sold the 362 ton Nera when he was only 25.[5]  In 1843 he was at the helm of the 551 ton Hibernia for the Black Ball Line and from 1844 he was captain of the Swallowtail Line’s Gladiator (650 tons). [6] The Constantine was an enormous ship by comparison and suggests both Bunting’s skill and ambition.  According to Arthur H. Clark,

It required an unusual combination of qualities to command these Western Ocean packet ships successfully. Above all things it was necessary that the captains should be thorough seamen and navigators; also that they should be men of robust health and great physical endurance, as their duties often kept them on deck for days and nights together in storm, cold, and fog. Then there were frequently desperate characters among the crew and steerage passengers, who required to be handled with moral courage and physical force, while the cabin passengers were usually gentlemen and gentlewomen of good breeding, accustomed to courtesy and politeness, which they expected to find in the captains with whom they sailed. These requirements evolved a remarkable type of men, hearty, bluff, and jovial, without coarseness, who would never be mistaken for anything but gentlemen.  [7]

Twenty-four year old “Tom Digane” from Urlingford, Co. Kilkenny was among the 637 souls recorded on the passenger manifest that Captain Bunting safely shepherded across the Atlantic on the Constantine.[8]  Thomas Duggan’s 1859 Test Book entry with Emigrant Savings Bank records his arrival in New York “about six years ago” on the Constantine in June 1852.[9]  His decision to sail with Captain Bunting may have been influenced by advertisements like that placed in the Cork Examiner on 2 June 1852. 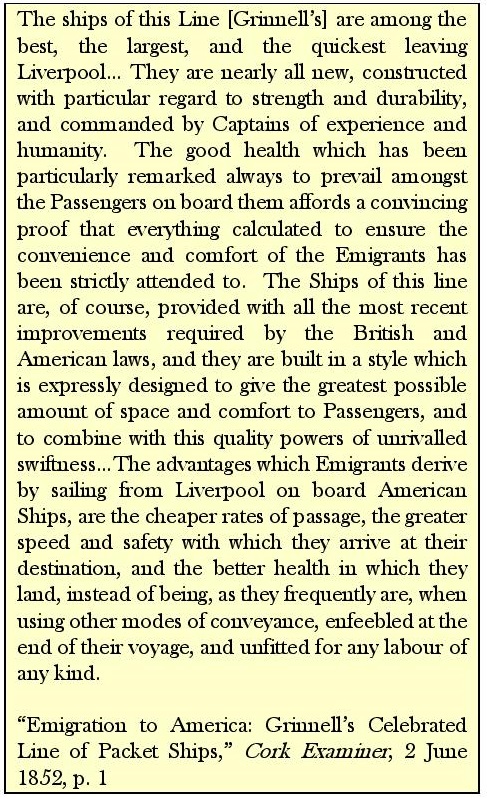 A local agent, E. S. Flynn of Merchant’s Quay in Cork, had been forwarding passengers to Liverpool since early May 1852.[10]  Urlingford is about equidistant from the ports of Dublin and Cobh, Co. Cork, suggesting that Duggan travelled between 80-90 miles from his home to transfer to Liverpool to pick up  an American packet ship.  As duly promoted, the Constantine left Liverpool on May 25 and arrived in New York on Sunday, June 27, with only one reported death.[11]

By the time he opened his bank account in 1859, Thomas Duggan was living in Manhattanville in New York City’s 12th Ward where he was enrolled in “Brother Stylien’s School” with his future ahead of him. This was the Academy of the Holy Infancy run by the Christian Brothers, a Catholic teaching order, that became Manhattan College in 1863.[12]

Captain Bunting was buried in Greenwood Cemetery, Brooklyn in 1859.  He had somehow survived a disaster in January 1854 when, nearly three weeks after departing New York for Liverpool, the Constantine was crippled by an Atlantic storm. Heavy seas “carried away a large portion of her spar-deck, shifted cargo, and nearly filled her with water.”  The Captain of a passing ship, who did not attempt to aid the Constantine, reported on arrival in New York: “She appeared to be in a sinking condition, and the crew were engaged in throwing over cargo. A severe gale came on at night, and Capt. S[turtevant of the Sarah Bridge] thinks it doubtful whether she lived through it.” [13]