On July 2, 1860, Margaret Reddan, born in Scrabby, Co. Cavan in 1835, opened account 24463 at the Emigrant Industrial Savings Bank. Scrabby, in the civil parish of Templeport, was a tiny townland with a total population of 102 at the time of Margaret’s departure.[1] As a child, Margaret would have certainly attended one of the four public schools in Templeport, which drew from the surrounding villages and townlands, because she was able to sign her own name in the bank’s Test Book.[2] Although Cavan experienced moderate to high mortality rates during the Famine,[3] Scrabby itself appears not to have been particularly hard hit as the population rate between 1841 and 1851 was stable.[4] This suggests that Margaret came to New York in search of personal advancement, rather than from strict necessity, although she may also have needed to support her widowed mother in Scrabby.[5] 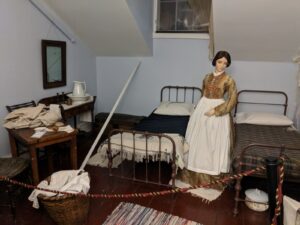 Servants’ quarters in the attic of the Tredwell home in New York City’s downtown 15th Ward, now the Merchant’s House Museum. Margaret Reddan would likely have slept in similar surroundings in the Smythe home in Carmansville. Source: Photo by Marion Casey, March 26, 2019.

Shortly after her arrival in New York in 1851, Margaret Reddan worked as a domestic in the home of the Costa family in Ward 15.[6] By the time she opened her bank account, she was employed as a domestic in the household of Henry Augustus Smythe in the village of Carmansville.[7] It is possible that Margaret’s move to employment with the Smythes was a step up for her. At 25, she was the eldest of the servants in the Smythe family’s employ, and, with at least nine years of experience, she might have occupied a senior role in the household hierarchy. Mary Malloy and Delia Fallon, the younger domestics, were also born in Ireland, as was the family’s coachman, John Mangin.[8] Given that the 1860 Federal Census for Ward 12 indicates that many households in Carmansville consisted of Irish families, several of whom listed their occupation as “servant,” it is also possible that the Smythes had additional employees who “lived out.”

The Smythe family was prominent in New York society. Henry A. Smythe was a successful commission merchant who partnered with the Francis Skinner & Co. mercantile house in Boston to open the company’s first New York branch in 1846.[9] He later parlayed this into his own firm, Smythe, Sprauge & Cooper, in 1857.[10] In 1851, Smythe, whose office was at 45 Broadway, purchased land in the rapidly developing Carmansville region of Manhattan.[11] Taking advantage of the newly constructed Harlem River Railroad line, he was able to relocate his family from the Washington Square area by 1853.[12] The residence he built, located just north of Trinity Cemetery at West 155th Street, was worth $15,000 (nearly half a million contemporary dollars).[13] 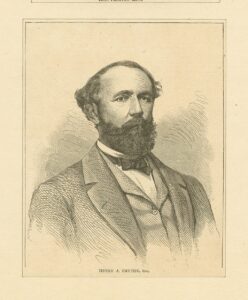 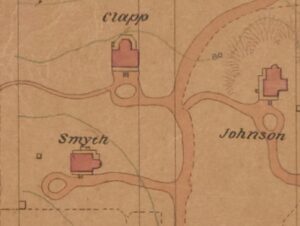 The Smythe home was one of the earliest built in what became known as Audubon Park. Detail, Fort Washington Section, copied from the preliminary map of the Commissioners of Washington Heights, November, 1860. Source: NYPL DigID 4004016 The Clapps had three Irish servants and the Johnsons one in 1855. Dwellings 247 and 248, Ward 12, E.D. 5, New York County, 1855 New York State Census.

Margaret Reddan was likely hired upon the completion of the home. At that time, the Smythe household consisted of Henry A. Smythe, his wife Mary,[14] and their daughters: Mary, Frances (“Fannie,”), and Helen (“Nellie”). Henry’s mother and mother-in-law, Elizabeth Smythe and Mary Franklin, respectively, also lived with the family.[15] Before their move uptown, the Smythes had employed two Irish-born domestic servants, Bridget and Sarah Lynch, though neither continued on when the family took up residence in Carmansville.[16] In the Smythe’s grand new home, their three Irish servants would have been responsible for cleaning, dusting, polishing, and all other housework.[17] It is likely that one of them, perhaps Margaret, may have been responsible for the kitchen: planning meals, ordering groceries, and cooking for the Smythe family, as well as her fellow domestics.[18] With three adult woman and three girls aged 10-15, it is possible that domestic duties also included assistance with dressing, mending, and other forms of personal care, as the Smythe daughters all grew up to be noted socialites.[19] 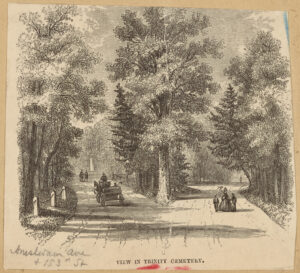 By the time Margaret Reddan came to work for the Smythes, Carmansville consisted mainly of the imposing estate homes of wealthy merchants overlooking the Hudson, with clusters of timber frame homes and shops in the village, including a police station, a butcher, a blacksmith, and a grocer, as well as a few churches and the sprawling Episcopal cemetery which opened in 1842.[20] Margaret Reddan likely would have attended the Catholic Church of the Annunciation on West 131st Street.[21] None of the other servants in the Smythes’ employ appear to have held accounts at the Emigrant Industrial Savings Bank, so it is possible that Margaret became aware of this opportunity through her fellow parishioners who were predominantly Irish.  Seventeen other Irish-born residents of Carmansville were saving with Emigrant too.

The Smythe family did not remain in Carmansville long. In 1866, Henry A. Smythe was appointed Collector of the Port of New York, and shortly thereafter moved his family back downtown to the 18th Ward.[22] Margaret Reddan did not remain with the Smythe household. After 1860, it becomes difficult to trace her, indicating that she may have married, left Manhattan, or passed away. As most single Irish women in domestic service saw their work as a means to acquire a dowry and marry, and as Margaret had the means and opportunity to open a savings account, marriage was Margaret’s likeliest fate.[23]

[9] “Confirmation of Henry A. Smythe—Duties of the Office—The Bonds, the Departments and their Personnel—His Patronage and Revenue—Sketch of the New Collector—The Regulations for Workers and Beggars.” New York Times, May 11, 1866. p. 5

[13] Matthew Spady, “Audubon Park: a Brief History to 1886,” A Walk through the Audubon Park Historic District, Published 2019. Accessed April 10, 2020. Dollar value calculated by https://www.measuringworth.com/ at the real commodity price in 1860.