New York’s 18th Ward was bounded on the south by East 14th Street, on the west by Sixth Avenue, on the east by the East River and on the north by East 26th Street. Close to twenty families who emigrated to New York City from the Castlegregory area of County Kerry during this period congregated in tenement houses on 21st and 22nd streets east of Third Avenue, many employed as stokers in the nearby New York Gas Company. Nearly all of the population in this poor district between First Avenue and the polluted East River were Irish or of Irish descent, “with the occasional admixture of a family of Germans.”[1] Lots for development had been auctioned off in this section of the City from the late 1840s. 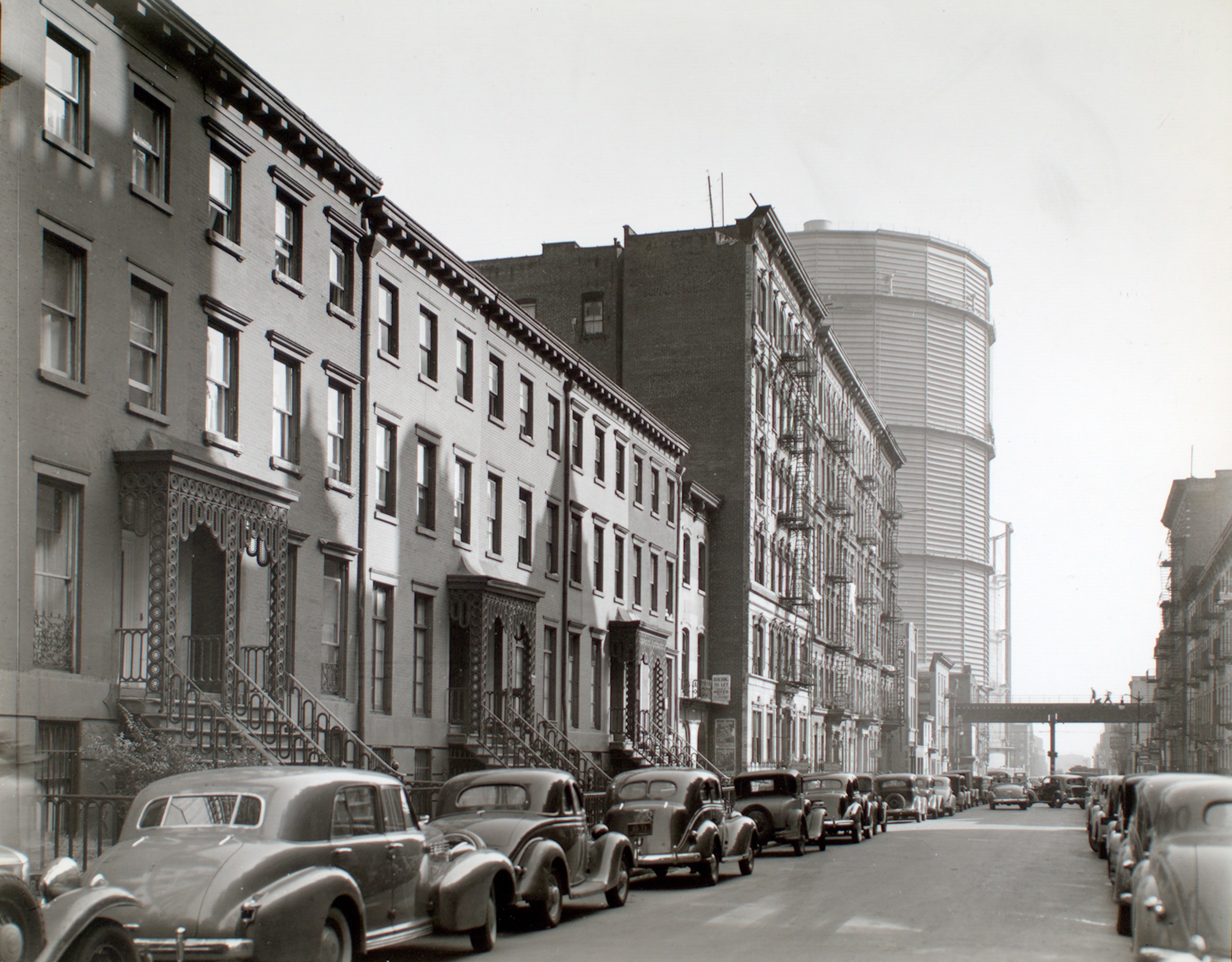 The area comprised a variety of housing conditions.  According to the 1865 Report of the Council of Hygiene and Public Health of New York City, those west of Third Avenue “are in a tolerably good condition”; those east of Third Avenue, as far as to First Avenue were in a mixed condition, while that further east “is positively insalubrious.”[2] Insalubrious meant the laboring class living in tenant houses with “the most widespread sickness, the most fearful mortality, and the greater amount of immorality, and misery, and want.”[3] Overcrowding exacerbated living conditions, “grasping landlords let out to the families of the poor a small modicum of God’s free air and sunlight, hardly sufficient for a single individual. Every expenditure of money which the law does not force them to, is refused.”[4] Overflowing privies without sewage pipes were left uncleansed in summer, hydrants were broken, sinks and entry points flooded during rain storms. Dr. Field, the inspector for the Nineteenth Sanitary District (East 21st to East 26th streets), concluded “the most important of the evils that have been described in this report cluster around that gigantic system of evils—the tenant house system.”[5] He asked exasperatedly if the intelligent and wealthy of the city “realize the want, and squalor, and immorality which exists within a stone’s throw of their own happy homes?”[6]

In the Gas House District, the cluster of emigrants from Castlegregory encountered an entirely different kind of lifestyle yet were able to re-create, to a certain extent, the familial and social support networks familiar to the rural village.  Of the 1,703 houses in this area of Manhattan’s east side, 400 were tenant houses, and 64 of these had rear-buildings. Tenements were mostly four stories in height, typically with two families per floor (although some had as many as five), each with a living room, 12’ x 14’ x 8’, with a sleeping room half its size. The 1865 report pointed to 220 and 222 East 17th Street, part of a block with seventeen identical buildings, as egregious examples of “fever-nests” that bred the typhus and typhoid that continuously afflicted the population in this area. A sanitary inspector speculated if debris from a former stream under number 222 contributed to the disease.[7] Four double tenant houses situated on 21st Street near First Avenue, one street below 22nd Street where many of the emigrants from Castlegregory lived, were also singled out.

Nearly seven thousand new patients applied to the local dispensary for treatment in 1864, with most of the sickness “due to overcrowding, faulty house drainage and neglect of precautions against infectious diseases.”[8] There were thirty-nine vacant lots in the district, some used for business, and others with shanties for animals or people. Seven slaughter houses east of Third Avenue contributed to disease and filth and the 1865 report recommended they be removed beyond the city limits. The Bull’s Head stables on 24th Street between Lexington and Second Avenues contained 1,000 stalls, potentially aggravating outbreaks of diphtheria. There was worry that a new public school on East 23rd Street would suffer negative health impacts from proximity to the stables and slaughter houses.[9] 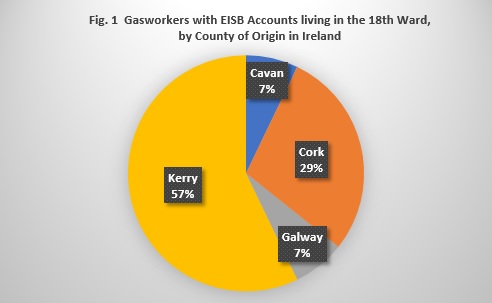 Fourteen Irish men were gas workers in the 18th Ward EISB sample, the majority from the Munster counties of Kerry and Cork. Figure by Ted Smyth, New York University, Spring 2018.

The Castlegregory immigrants did their best to make these grim conditions tolerable where, unlike Co. Kerry, men and women could find work even if it was very onerous and odious. Many of these families lived opposite the Gas Works between First Avenue and Avenue A in a row of six brick tenant houses, numbers 185 to 195, occupying a block on the north side of East 22nd Street, that was mostly given over to the gas works and stone, coal and lumber yards.[10]

Michael Malone from Stradbally lived in 195 East 22nd Street with his wife Judy Callaghan and two children John and Thady.[11] John, also a gas worker, had his own savings account.[12] Another resident of this building was Edmond O’Brien, who arrived from Brandon Quay, Co. Kerry in 1853, his wife Abby Murphy and their three children. He too was employed in the Gas Works.[13]

Next door, at 193 East 22nd Street, lived John Courtney from Castlegregory, who was married to Julia O’Connor and had four sons and two daughters.  One of these sons, Eugene, arrived in New York in 1858 but the whereabouts of the rest of the family is unclear.[14]  They were joined in the same tenement by Ann O’Connor, a domestic, and her husband Jeremiah Kane from Clydane, Co. Kerry.[15]

John Griffin, a laborer from outside Castlegregory, lived with his wife, Ellen Commins, next door in 187 East 22nd Street.[17]

Bridget Loonie, a widow and housekeeper who came to New York from Tralee in 1853, lived with five children in 162 East 22nd Street, between First and Second Avenues.[18]

Timothy Murphy, unmarried and a gasman, lived in 138 East 22nd Street, having emigrated from Castlegregory in 1857.[19] 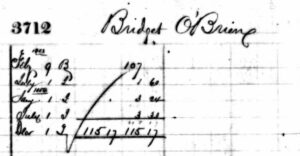 Bridget O’Brien did not keep her savings account for long. She withdrew $115.17 after only 22 months, the equivalent of $3,470 by twenty-first century standards of living. Account No. New York, Emigrant Savings Bank, AncestryLibrary.com

Bridget O’Brien (nee Callaghan, her mother, Brigid, was a Forhan), arrived in 1848 from Castlegregory and kept a porterhouse on 21st Street, between First and Second Avenues, a likely meeting place for people from home with her. Outside observers were critical of the abuse of alcohol by the poor, and while the number of drinking saloons was officially one to every twenty-two dwellings in this area, the ratio was more like one to 88 families if all the families in the tenant houses are counted. Given overcrowding in the tenements, saloons or porter houses like that run by Bridget O’Brien were often used for eating and socializing as well as drinking. Shops were frequently cabbage and potato stores by day and sleeping quarters by night.[21]  Mary Callaghan, Brigid O’Brien’s sister, lived nearby at 194 East 22nd Street with her husband Thomas Spillane and their three children. Her occupation was housekeeper.[22]

An extended family network can be see through the Forhan relations of Bridget O’Brien and Mary Spillane.  Eugene Forhan and his brother John, both unmarried gas workers lived, at 22nd Street and Second Avenue.[23] Eugene Forhan had two other bank accounts plus one for his brother Jeremiah.[24] They were joined in the same area by Andrew Forhan, an unmarried gas worker and presumably a cousin, who arrived in 1854, followed by his brother Timothy Forhan in 1855.[25] 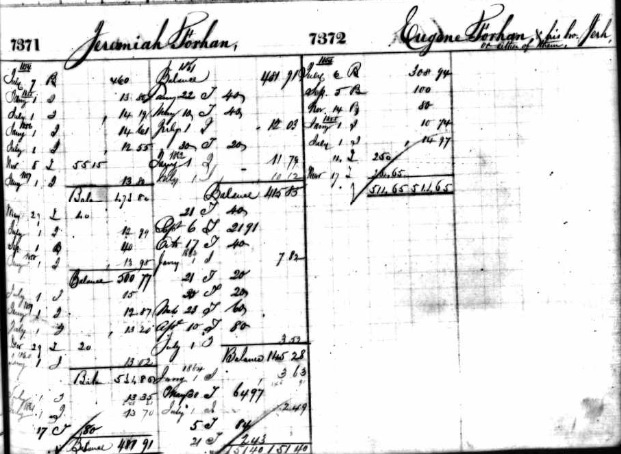 Jeremiah and Eugene Forhan, both laborers from the Dingle Peninsula in Co. Kerry, opened account nos. 7371 and 7372 one day apart in the summer of 1854. Jeremiah’s was very active, both with interest payments and withdrawals over the next ten years. In addition to Acct. No. 7372, Eugene Forhan also had Acct. No. 2901 from 1851-1854; he appears to have been a more strategic saver. New York, Emigrant Savings Bank, AncestryLibrary.com

[10] In 1861, Manhattan adopted the decimal system from Philadelphia which assigned a set of 100 numbers to each block of a street between two major avenues. For example, the addresses on the block between Fifth Avenue and Madison took the numbers East 1 through 99. The tenements on the block between Second and First avenues would after 1861 be numbered 300 to 399, “Manhattan’s Confusing Avenue Addresses,” Keith Williams, New York Times, September 15, 2017, https://www.nytimes.com/2017/09/15/nyregion/manhattans-confusing-avenue-addresses.html