Cherry Street was located not far from the infamous Five Points neighborhood of New York, and it contributed its own share of notoriety to the city’s history. In the 1850s the dominant gang in the area was the Swamp Angels, ruling from a “rookery on Cherry Street called Gotham Court.” 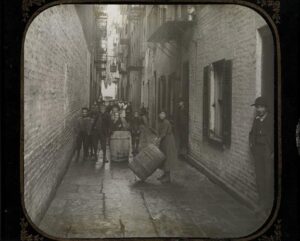 Gotham Court, also known as Sweeny’s Shambles, was an enormous double tenement occupying 36 and 38 Cherry Street, with roughly a thousand occupants, mostly Irish. “As measured, it is 34 feet and 4 inches wide in front and rear, is 234 feet long and 5 stories high.” [1] 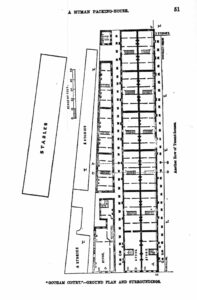 “A Human Packing House” ground plan for Gotham Court tenement.
(Source: Report of the Fourth Sanitary District contained in the Report of the Council of Hygiene, 1865)

The Fourth Ward’s large main sewer ran under Gotham Court and afforded the Swamp Angels a place to hide, store and enjoy their illegal contraband. Unlike the Dead Rabbits and the Bowery Boys of the Five Points with their turf wars, the Swamp Angels were professional criminals, i.e., river pirates. [2] They worked the East River, and as the Chief of Police, George W. Matsell, described them in his 1850 report to the mayor, they, “pursue their nefarious operations with the most systematic perseverance, and manifest a shrewdness and adroitness which can only be attained by long practice. Nothing comes amiss to them. In their boats under cover of night, they prowl around the wharves and vessels in a stream, and dexterously snatch up every piece of loose property left for a moment unguarded.” [3] 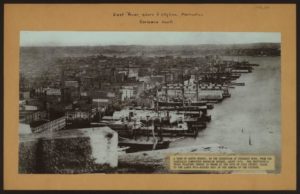 View from unfinished Brooklyn Bridge toward Corlears Hook about 1876. 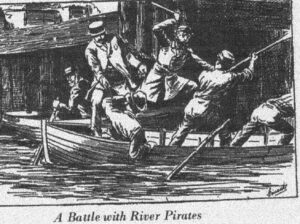 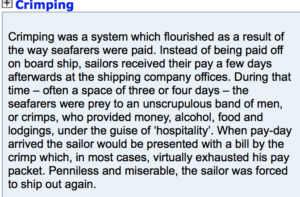 In addition to river piracy, ‘crimping’ was another common waterfront criminal activity. Crimping has been broadly described as a ‘universal system for maritime plunder.’ The term encompasses a number of activities from swindling to assault and robbery to ‘shanghaiing’, the practice of delivering unconscious seamen to unscrupulous sea captains to serve on ships.

“A successful crimp would organize a whole hierarchy of helpers. Himself often a wealthy publican or boarding-house owner, he could be in league with any or all of the following… “Runners,” “brothel-keepers,” “pot-house bullies,” “cheating slop-sellers,” and “pettifogging sea-lawyers.” [4] Cherry Street became infamous during the mid-1800’s because it was lined with boarding houses, some of which operated as ‘crimp houses’. Ships would dock at the nearby waterfront and the crew would disembark for leave in New York, often finding temporary accommodations on Cherry Street. Some of the boarding houses were operated to crimp, or rob and possibly murder, the victim while asleep in his room, with the perpetrators usually entering through secret wall panels. The body would be disposed of in the sewer. At other times, the sailor would be drugged while having a drink on the building’s ground floor, then robbed.  The Cherry Street neighborhood would become a focal point for religious reformers actively providing support to mariners to combat crimping, as well as provide spiritual guidance.

Due in large part to the proximity of the docks, prostitution was also prevalent in the area. In 1865 Dr. Oscar G. Smith, Sanitary Inspector for the Ninth Sanitary District (the Seventh Ward), reported that while “the number of houses of ill-fame in this district are not large, those that are known are of the lowest and vilest kind.” [5]

Crime would be an on-going problem and, as late as 1890, Jacob Riis, at times prone to exaggeration, would remark, “Murder is as congenial to Cherry Street or to Battle Row as quiet and order to Murray Hill.” [6]

[1] Report on the Council of Hygiene for the Fourth Sanitary District, p. 49.

[2] The distinction is affirmed in this excerpt from the New York Times of July 6, 1857:

[5] Report on the Council of Hygiene for the Ninth Sanitary District, p. 106.