The northernmost Mott Street block (between Bayard and Walker streets) was part of the Sixth Ward but it was atypical in an otherwise heavily Irish neighborhood.  The majority of its storefront businesses were German in the mid-1850s, including two butchers (Hamm, Gomprecht), three grocers (Engle, Reimers, Braun), two ‘milk and butter’ dealers (Dodd, Stammer), and a cabinetmaker (Stuckenrath).[1]

Germans were second only to the Irish in terms of the largest European group to emigrate to the United States in the middle of the nineteenth century.[2]  New York had the third largest German-speaking population in the world, following only Vienna and Berlin.[3]

Language was the critical factor in German settlement patterns in New York City.  Although Kleindeutschland was a distinctly German district between Canal and Livingston streets, in fact  “Little Germany” actually extended as far north as Houston Street and as far west as Lafayette Street in the Fourteenth Ward.[4] By 1856, 44% of the Eleventh Ward was German; a considerable number had moved into the Seventeenth Ward; and, overall, Germans preferred settling on the east side of Manhattan where they could speak their native tongue and be around others with habits and customs they were used to back in their homeland. Initially, German business activity was in and around William Street but in the 1850s businesses followed German migration and eventually took over the Bowery north of Chatham Square.  As one German observed “As one passes along the Bowery, almost everything is German.”[5] 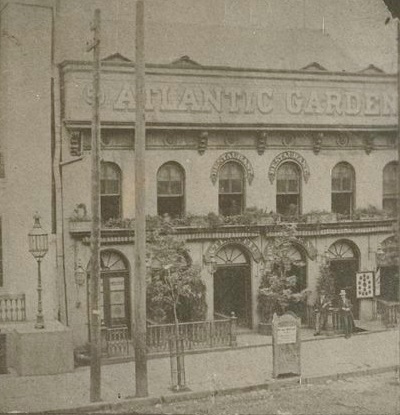 Just two short blocks to the east of this stretch of Mott Street was the Atlantic Garden at No. 50 Bowery, a music hall and beer garden popular with German immigrants from 1858. NYPL Digital Collection, ID 716734F. 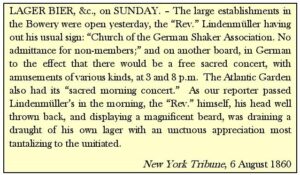 The Germans had a creative way to circumvent restrictions on the sale of liquor on Sundays at this time. Gustavus Lindenmüller’s establishment was at 199 Bowery, a couple of blocks north of the Atlantic Garden.

No. 66 Mott Street was a German boarding house owned by Ignatz Kunz, who emigrated in 1845 and operated the porterhouse on the premises in 1855.[6] Seventeen young, skilled German-speaking men lived there that year: Morris Bendit and Gutloff Fater, both tailors, S. Wentler, a cabinetmaker, as well as carpenters, goldbeaters, blacksmiths, and tailors, all unmarried.[7] They most likely slept two to a bed, and four or six to a room, and were served hearty breakfasts and dinners as part of their room and board.[8] The following year, Kunz opened a restaurant at No. 76 Ann Street and the porterhouse at No. 66 Mott passed to another German, Hermann Dittrich, who had previously operated a saloon in the Fifth Ward.[9] 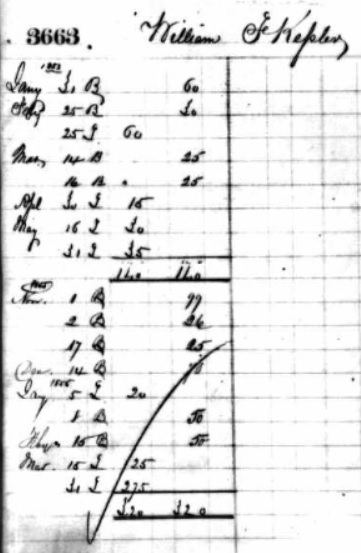 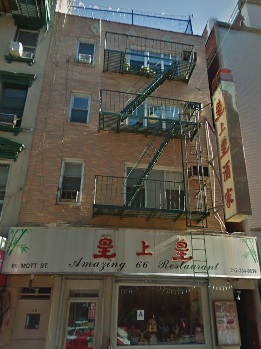 After emigrating from Stuttgart in 1848, the year the German revolution started, William Kessler lived with his wife Ruth in this building from approximately 1853-1857 and opened four accounts in the Emigrant Savings Bank.  He also transitioned during these years from making leather (morocco) cases into operating a lager beer saloon at No. 54 Cherry Street, the occupation he reported when he opened Account No. 14242 in April 1857.[10]

While 66 Mott was predominantly German, it was not exclusively so.  The widow Bridget Dolan, who left Athleague, Co. Roscommon around 1836, lived at this address in 1860 when she opened account No. 23088 at Emigrant Savings Bank.  She gave her occupation as “washer” and was supporting two children at the time. She is most likely the same Bridget Dolan who, five years earlier, was working as a laundress in the Eighteenth Ward (above 14th Street) to support her three young sons, one of whom may have died before the 1860 census found them down in the Sixth Ward. [11]   The liquor dealer Thomas Farrell worked out of Nos. 71 and 73 Mott Street at various times through the 1860s until his death in 1879 in No. 66 Mott Street.[12]