Working with a sample of 108 Irish-born account holders with the Emigrant Industrial Savings Bank, the following provincial, county and gender characteristics were revealed. 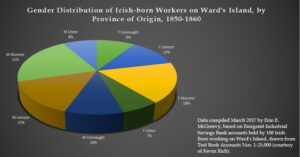 Of the 108 Irish Born who resided or worked on Ward’s Island, 39% hailed from the province of Munster – 21% male and 18% female. This sample illustrates the unique gender equity amongst Irish immigrants in the 19th century – 54% male and 46% female.  During the period from 1841 to 1911, men and women left Ireland in roughly equal numbers. According to historian David Fitzpatrick, the “unusually even balance of the sexes in Irish emigration was achieved not by universal movement in family groups, but through a steady flow of unattached girls as well as youths. Irish female immigrants”.[1] It is interesting to note that Irish females made up a larger portion of emigrants than from any other European country in the 19th century. These brave Irish women and girls also tended to be younger than their male counterparts.[2] 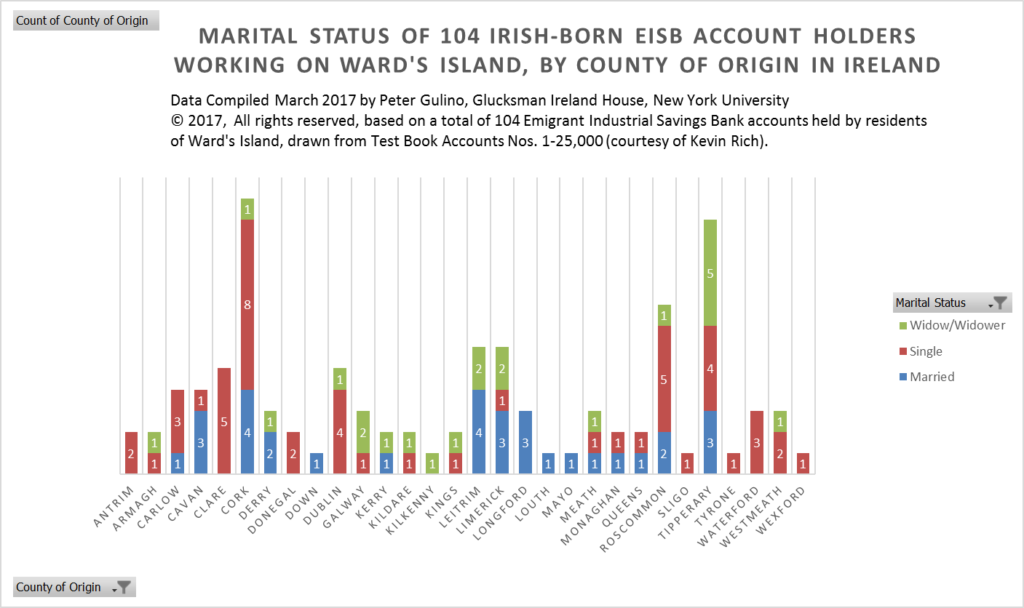 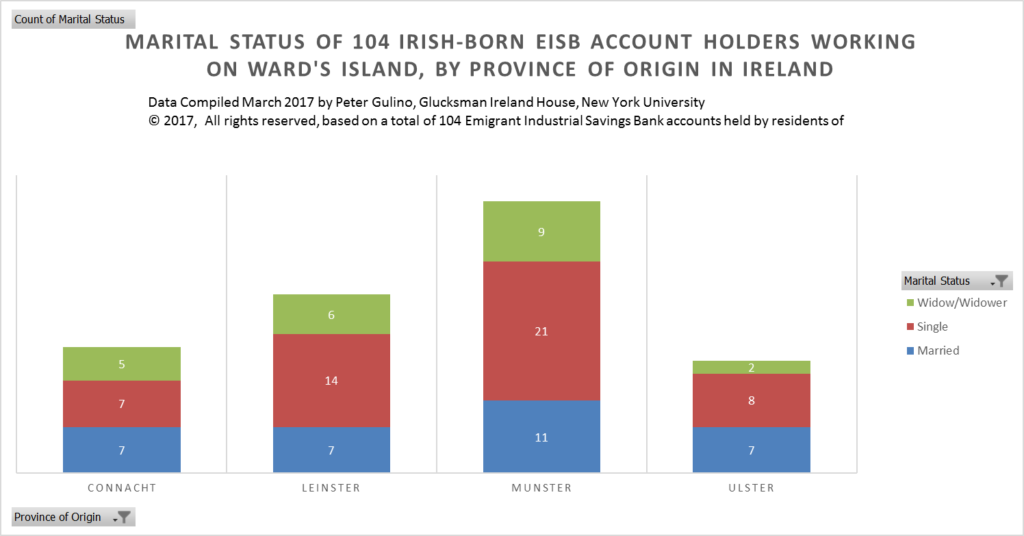 While the overall sample of Irish-born EISB account holders on Ward’s Island contains 22 widows/widowers, 32 married individuals, and 50 single individuals, the county by county and province by province breakdown of marital status demonstrate a more complex distribution of marital status. Region and gender are two interesting lenses through which the issue of marital status can be viewed. The two charts above obviously demonstrate the county and province breakdown, but when compared to the Gender/County of Origin Chart (found below), and interesting connection between gender and region appears.

Overall, males represent a larger portion of single individuals (36 single males to 14 single females), females represent a larger portion widows/widowers (19 widows to 3 widowers), and the number of married men to married women is equal at sixteen each. When viewed by region, however, a much different picture emerges. For example, when viewing the chart below, the province of Ulster contains three counties with a larger amount of male immigrants than females (Donegal, Derry, Down), two provinces with a larger portion of female immigrants than males (Armagh, Tyrone), and three provinces with an even number of male and female immigrants (Antrim, Cavan, Monaghan). (Fermanagh is not represented in the EISB Ward’s Island Sample). As shown by the province graph above, there is roughly a balanced number of single immigrants and married or widowed immigrants.

While Connacht is largely similar to Ulster in this manner, Leinster and Munster are quite different. In these provinces, there is a correlation between the number of male immigrants and the number of single migrants. Of all the counties in Leinster and Munster that contained more males than females, each of them had at least half of the population as single. The biggest discrepancies between male and female migration, County Dublin, County Clare, and County Cork, also produced the largest discrepancies between the amount of single versus married or widowed immigrants in favor of single immigrants.

Also there are counties that do not conform to the larger picture of their respective provinces. Roscommon and Leitrim, for example, are much similar to the data patterns seen in Munster and Leinster in regards to the correlation that seems to exist between gender and marital status. Roscommon natives in the EISB sample were mostly male and single, while Leitrim natives were mostly female and either married or widowed.

With a small sample size, it is hard to make too many larger assumptions about the complete nature of these differences. That being said, some of the differences can be demonstrated as being related to socio-economic culture. Dublin, for example, revolved economically around manual labor projects such as construction. Kirby Miller, in his book Emigrants and Exiles, describes how after the decline of the Southern linen market, these sorts of construction and manual labor jobs were the only job option available to farmers’ sons who did not have enough funds to travel directly to the US.[1] Therefore it is unsurprising that the majority of Dublin natives in the EISB Ward’s Island sample were single and male. In Ulster the decline of the linen industry was not as pronounced as it was in the South, and thus families, even rural families, had more opportunity to gain capital.[2] This would have allowed more family units to move to the United States, demonstrated in the sample by the more even distribution of males and females and the more even distribution of married immigrants and single immigrants.

Other socio-economic questions are harder to answer. For example, why are Roscommon and Leitrim so different in the sample, but so similar socioeconomically? Another problem that exists revolves around the nature of each immigrant’s marital status. While marital status is usually listed in the EISB test books, the details of the marriage are not. Therefore it is hard to know whether the immigrants married before or after they moved to New York. This could potential change the relationship between county and province of origin to marital status, but it must also be noted that 89 immigrants in the sample were in the country for less than five years before they recorded their marital status in the test book. It is hard to completely answer too many questions with such a small sample size, but, by looking at the marital status of Irish immigrants in the EISB Ward’s Island sample, we can begin to develop a rounder and more intricate understanding of the Irish immigrants who lived there. The more we understand this community, along with other communities, the more we can help add pieces to the puzzle and either corroborate or refute larger historical narratives. 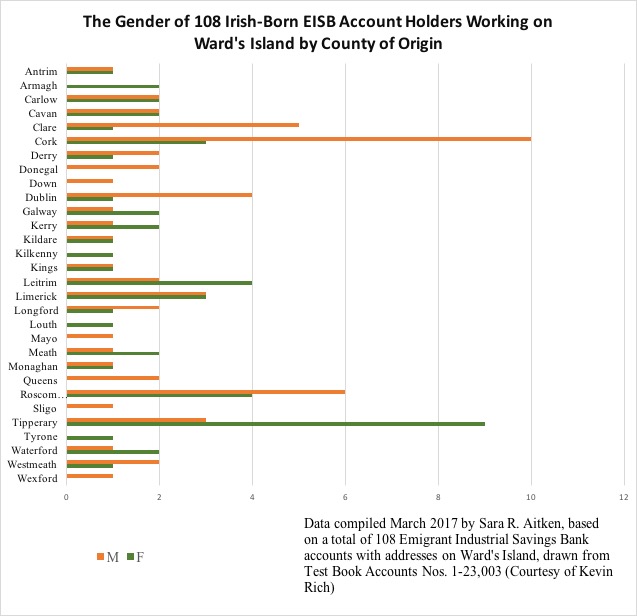 In several cases, there is evidence of chain migration from the counties experiencing high migration in the above graph. . For instance, Maurice Warren of County Roscommon’s Emigrant Savings Bank test book record indicates that he had a mother and two brothers on Ward’s Island. Moreover, Catherine Birmingham of County Tipperary had a mother in New York[3]. Chain migration likely accounts for the reason for immigration for the majority of our sample, coupled with economic opportunity.