In the nineteenth century, New York City’s goods zigzagged across streets in carts drawn by hand or by horse with the aid of public porters or cartmen who were licensed by the municipal government in the manner of modern day taxicabs.  In 1834, applicants paid “the sum of one dollar, and for every renewal of such license, the sum of twelve and a half cents.”[i]   These licenses expired each year on the first Monday of April and could only be renewed upon that date; later, this date was changed to allow licenses to last one year from the date of issuance.[ii] 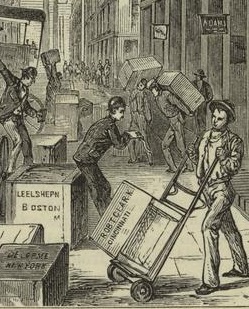 Public porters and cartmen were required to wear badges with their names and license numbers or be subject to a fee for failure to do so. They also carried cards or plates with the same information as well as the current rates for transportation of goods in New York City.[iii]  Rates were fixed by the office of the Mayor, which parsed mileage and fees with admirable specificity in accordance with distance traveled and device used to transport loads.  For example, in 1834, transporting a load for less than a half-mile by handbarrow cost 25 cents, while carrying the same load for the same distance by wheelbarrow cost only 12.5 cents.[iv] In 1864, these rates were amended to 12 cents for objects carried by hand for less than a half-mile and a flat rate of 25 cents by wheelbarrow or handcart for the same distance.[v] Porters and cartmen faced additional fines for refusing to carry goods, as well as allowing others to use their uniform or badge to work their profession.[vi]

This sector of the New York City economy was initially dominated by Anglo-American and Dutch small entrepreneurs but, by the middle of the nineteenth century, the nature of the business was transformed.  An 1849 law removed many restrictions, the “license lost much of its value,” and 8,000 cartmen were working in the City by 1855. The Irish made up the majority of the foreign-born carters.  They “formed companies of 20 or more men working for daily wages. … Many Irish cartmen worked exclusively for the city government on sanitation, road work, and land-fill projects.  While the pay at around $1.75 per day was not spectacular, it was dependable and regular.  During hard times, municipal carters often received raises.” [vii]

Porters were usually affiliated with a specific store where they were responsible for heavy lifting and cleaning in addition to deliveries.  It was not an easy job; during the summer of 1845, Charles T. Conner, a 45 year old native of Ireland and Public Porter No. 138, died from the effects of the heat while making a delivery in William street. [viii]

Public Porter No. 151 was John Pentony, a native of Stabannan, a townland located about a dozen miles north of Drogheda and five miles east of Ardee in County Louth.  Pentony is most likely derived from the old Norman ‘De Repenteny’ which dates from the late twelfth century conquest of Ireland and is a name particularly associated with this part of Leinster. [ix]   Griffith’s Evaluation listed twenty-seven Pentonys in the mid-nineteenth century, most in the parish of Tullyallen, near Drogheda.[x]  Stabannon had 279 residents in 1837, one year after John Pentony emigrated to New York.[xi] 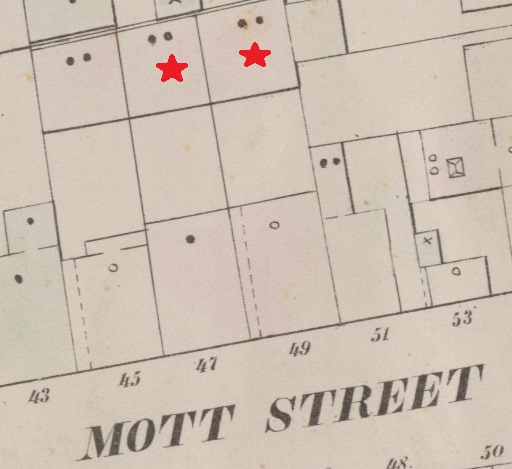 The Pentony brothers lived next door to each other in the rear tenements at Nos. 47 and 49 Mott Street. Detail, Plate 26, Perris Fire Insurance Map for the 6th Ward, 1852. NYPL Digital Collection.

By the early 1850s John Pentony made his home in the rear dwelling at No. 47 Mott Street with his wife Mary O’Neill and another porter Joseph Garland, both Stabannon natives, plus his sister Bridget and their niece Mary Keane.  Next door at No. 49 Mott Street, his brother Christopher, one of only 150 Irish-born sawyers (men who cut wood) in the City, resided with his wife Mary Marry (born in Drumcashel, about a mile from Stabannon) and their three sons. This little Louth group was rounded out in 1855 with another niece, Mary Jackson.[xii] 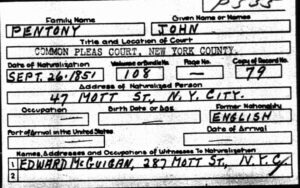 John Pentony became a United States citizen in 1851, the same year he opened a savings account with Emigrant. Christopher Pentony’s son John, who worked as a painter, became a citizen in 1866. Ancestry.com

Family clusters like the Pentonys were a buffer against the arbitrariness of life on the edges of the Sixth Ward’s notorious “Five Points” district.  So too were savings.  In June 1851 John Pentony opened account no. 738 with $100 in the Emigrant Industrial Savings Bank; he died circa 1864 but his wife kept the account until 1869, then withdrew the full balance of $605 [the equivalent of $11,000 in 2016].  But neither she nor other relatives moved from the block, according to the 1870 census.  Likewise, Christopher Pentony and his wife had account no. 12081 from 1856 until 1866; their highest balance was $479 in the summer of 1861.  They moved around the corner to 33 Pell Street around 1864.  Perhaps both brothers used some of their savings to stake Christopher’s son Patrick in business.  He opened a manufactory at No. 24 Mott that made 50,000 segars in 1870 and by 1900 had moved with his wife, Sarah, and four sons to 206 East 63rd Street.[xiii]

[i] Peter Van Pelt, Laws and Ordinances, Made and Established by the Mayor, Alderman and Commonality of the City of New York, in Common Council Convened, A.D. 1833-1834 (New York: City of New York, 1834), 171, https://books.google.com/books?id=YeM4AQAAMAAJ&pg=RA1-PA170-IA3&lpg=RA1-PA170-IA3&dq=nyc+public+porter+license&source=bl&ots=NRuFM2wC_X&sig=Ulgc-8hMzimKeAi_xDFJb3E-ujw&hl=en&sa=X&ved=0ahUKEwi4kMjbg8XTAhXKNSYKHXFgAV0Q6AEIPzAG#v=onepage&q=nyc%20public%20porter%20license&f=false.

[vi] Van Pelt, 173; Phelps’ New York City Guide: Being a Pocket Directory for Strangers and Citizens to the Prominent Objects of Interest in the Great Commercial Metropolis, and Conductor to Its Environs (New York: T. C. Fanning, 1852), p.58.

[xi] As of 1837, the barony of Ardee contained “2221 inhabitants, of which number, 279 are in the village of Stabannon.” According to Samuel Lewis,  A Topographical Dictionary of Ireland (London: S. Lewis & Co., 1837), http://www.libraryireland.com/topog/S/Stabannon-Ardee-Louth.php; James B. Leslie, History of Kilsarian Union of Parishes in the County of Louth, Being a History of the Parishes of Kilsaran, Gernonstown, Stabannon, Manfieldstown, and Dromiskin, with Many Particulars Relating to the Parishes of Richardstown, Dromin, and Darver, Comprising a Large Section of Mid-Louth (Dundalk: W. Tempest, 1908), p. 175.